The next morning we were up early and off to explore the city of Seattle.  I hadn't actually been here in years so it was fun to walk around.  We spent the entire day walking up and down the hills of Seattle.

I took a few shots of the buildings.  I liked the reflections in this photo. 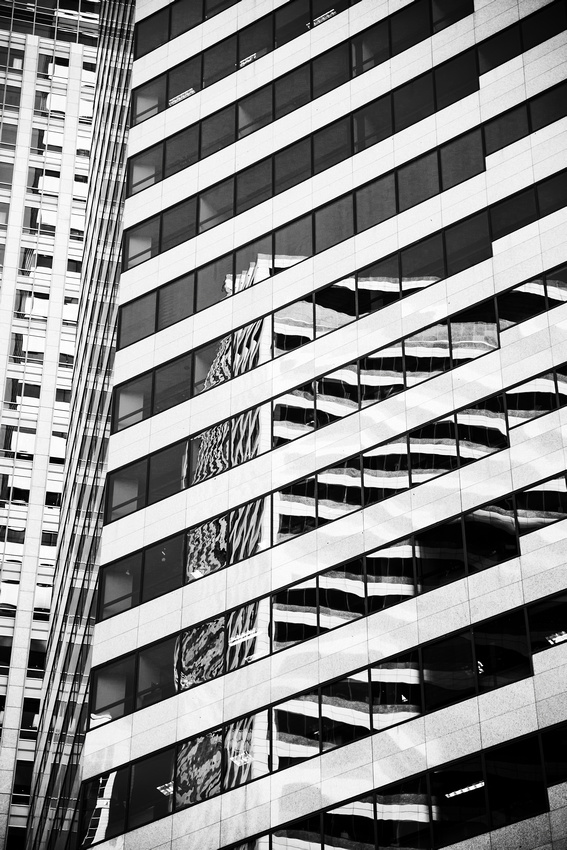 I liked this photo in black and white.  Again, I thought the reflections and lines were interesting. 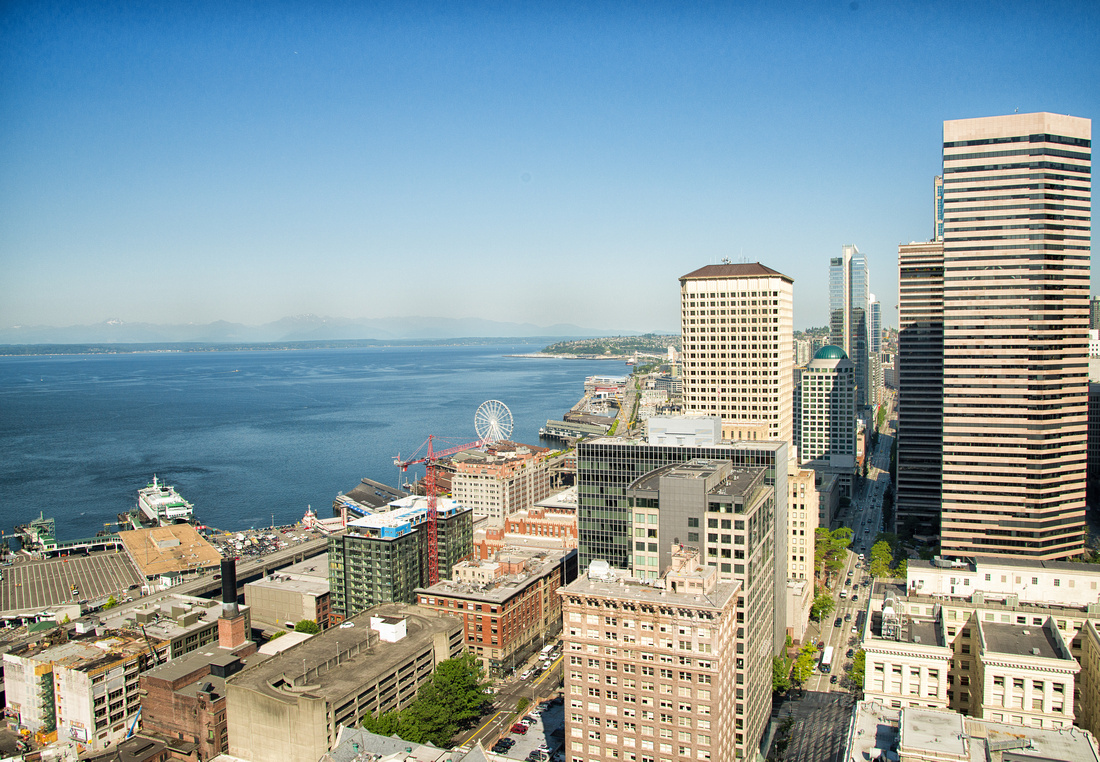 Our first stop of the day was the Smith Tower, a skyscraper in Pioneer Square.    We went up to the observation deck where I took this photo.  Fortunately it was much easier to take pictures than the Space Needles' deck.  Completed in 1914, the 38 storey, 489 foot tower is the oldest skyscraper in Seattle.  It remained the tallest building in the West Coast until the  Space Needle overtook it in 1962.    On March 23, 2012 Smith Tower was sold to the CBRE Group at a public foreclosure auction.   We went up the wrap around observation deck on the 35th floor where I took this picture. 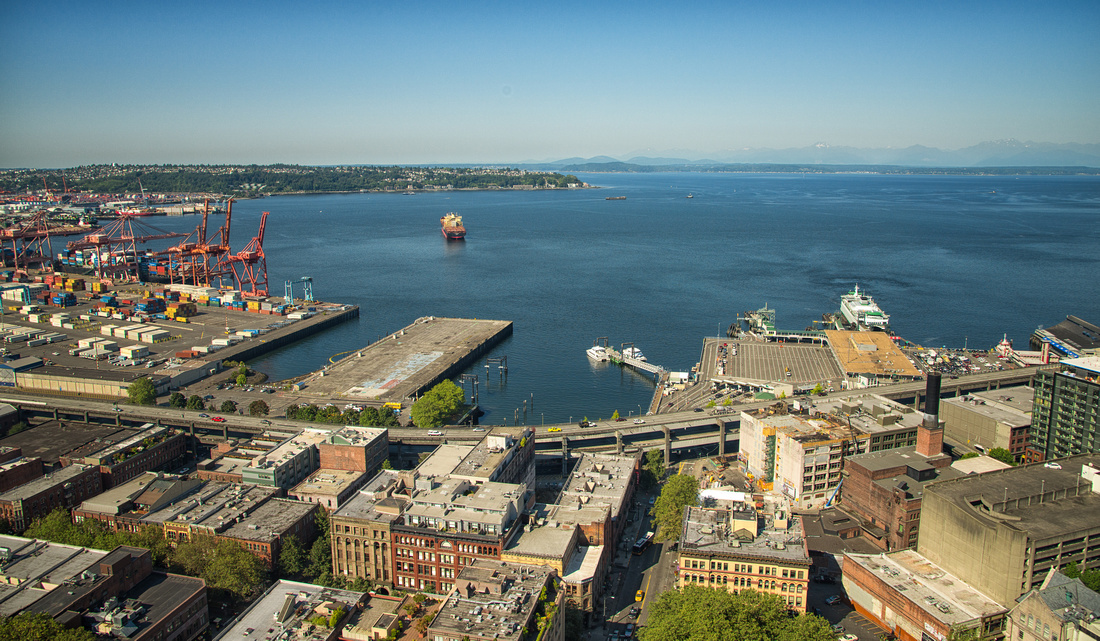 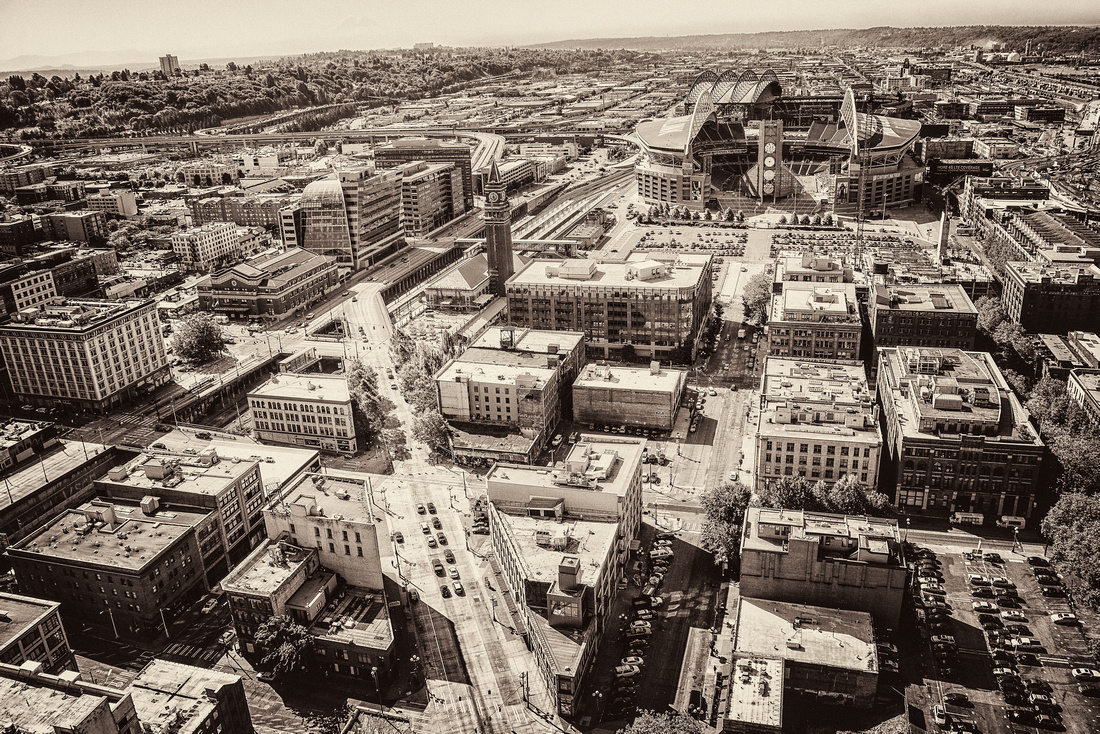 You can see the stadium in the background. 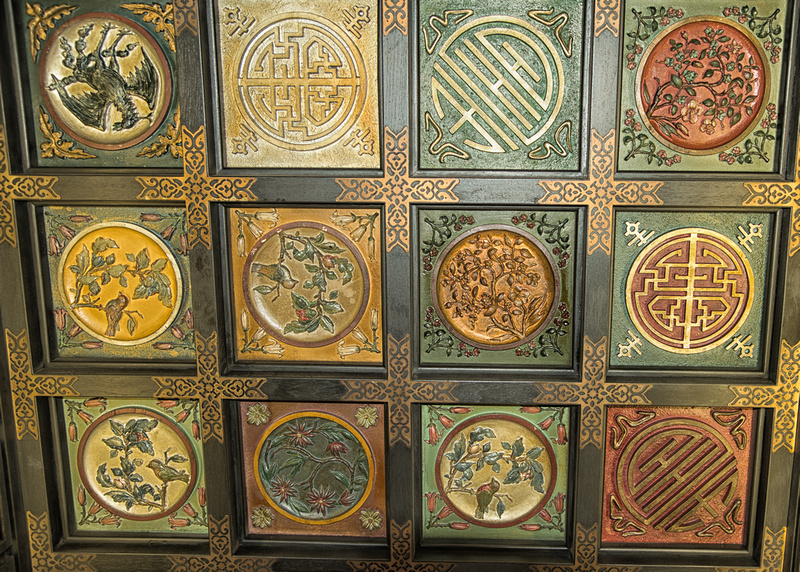 The Chinese Room is on the 35th floor where the observation deck was also located.  The furniture and the hand-carved ceiling above were gifts from teh Empress of China, Cixi.    After the restoration in the early 1990's, workers removed the 10,000 US-gallon water tank in the top of the tower.  The resulting space along with a former maintenance man's apartment becasme a three- storey penthouse, the only residence in the building.  It is currently occupied by artist/investor Petra Franklin, husband David Lahaie, and their two daughters. 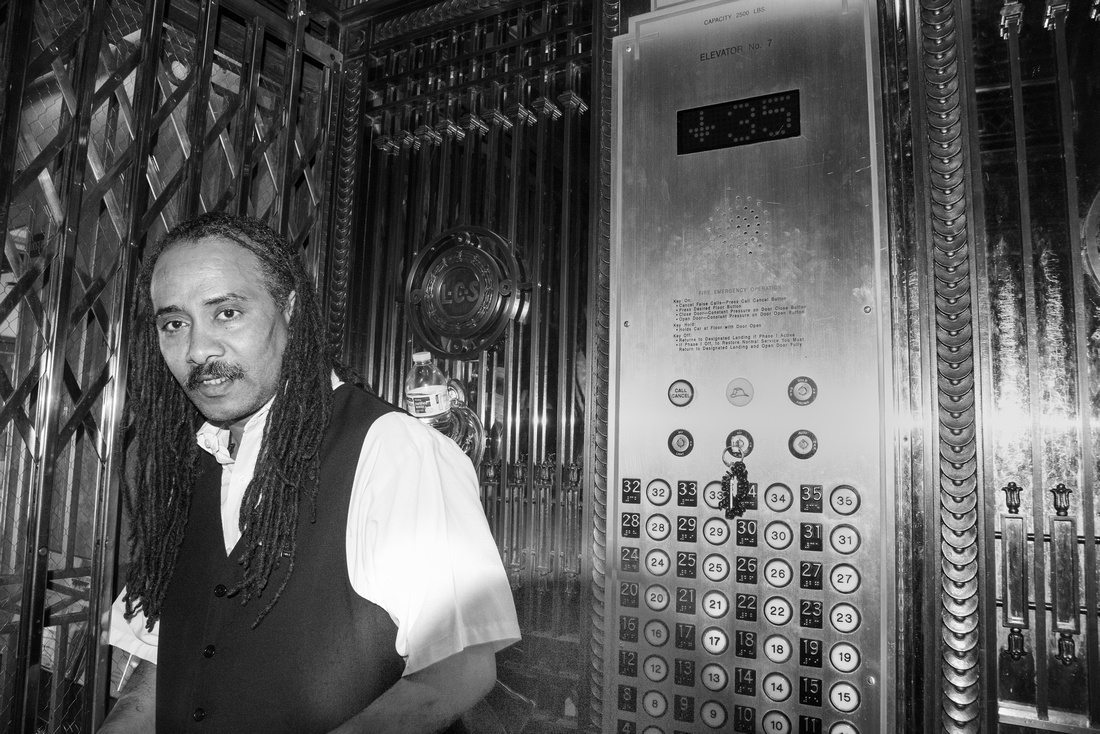 The building is one of the last on the West Coast to employ elevator operators.  The doors are latticed, so the riders can see into each hallway and through the glass walls in the front of each office. 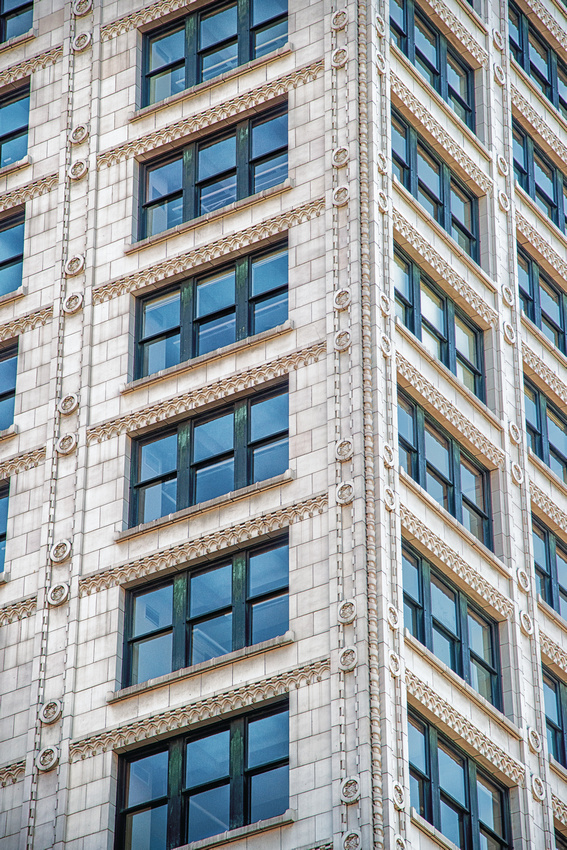 This is a close up of the Smith Tower looking up from outside. 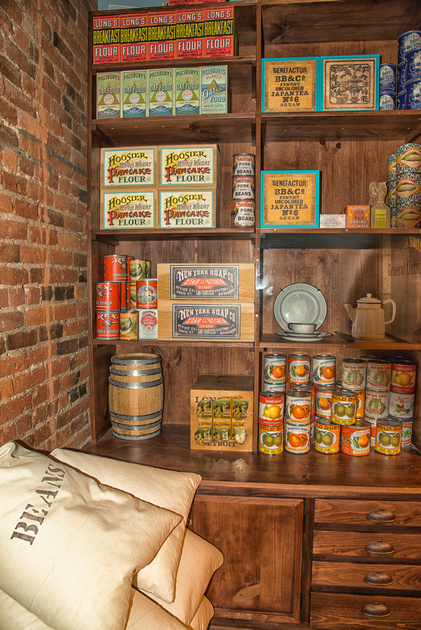 We ended up going into the Klondike Gold Rush exhibit located in the historic Cadillac Hotel.  The ground and first floors of the building contains exhibits commemorating and preserving the story of the rush to the Yukon gold fields in 1887-98.  This photo  showcased various types of cans/food products that the prospectors took with them.  Of the estimated 100,000 people travelling to the Klondike region of the Yukon in northwester Canada, only around 4000 struck in rich.   The journey to the Klondike was arduous and involved travelling long distances and crossing difficult mountain  passes. 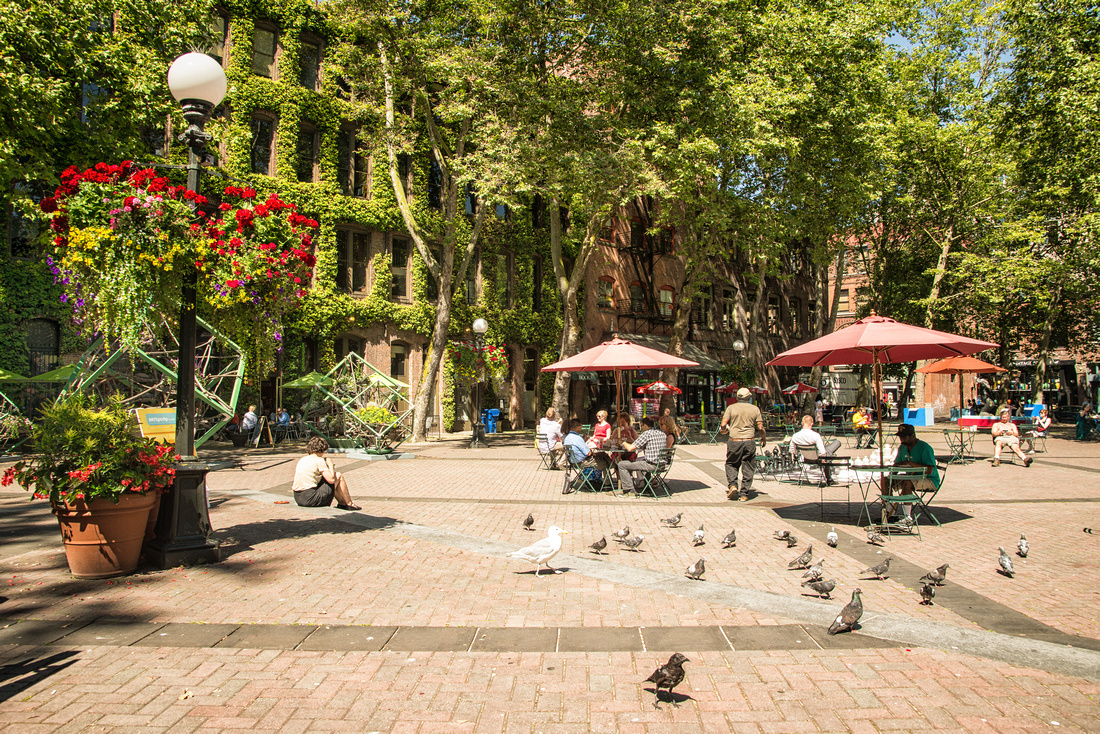 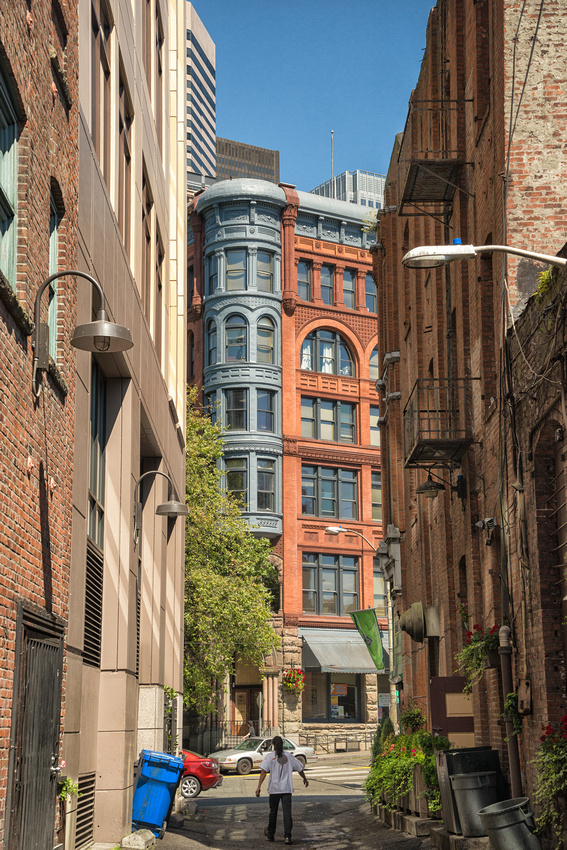 An alleyway near Pioneer Square.  I liked the colour of the background building. 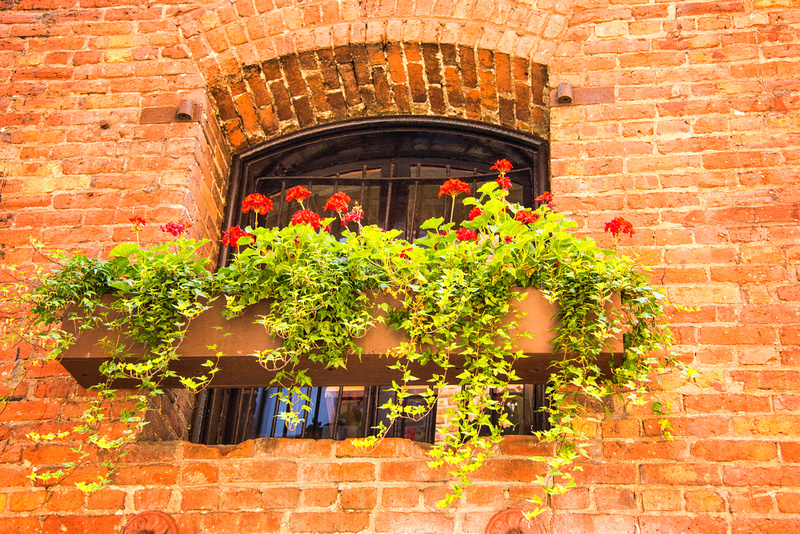 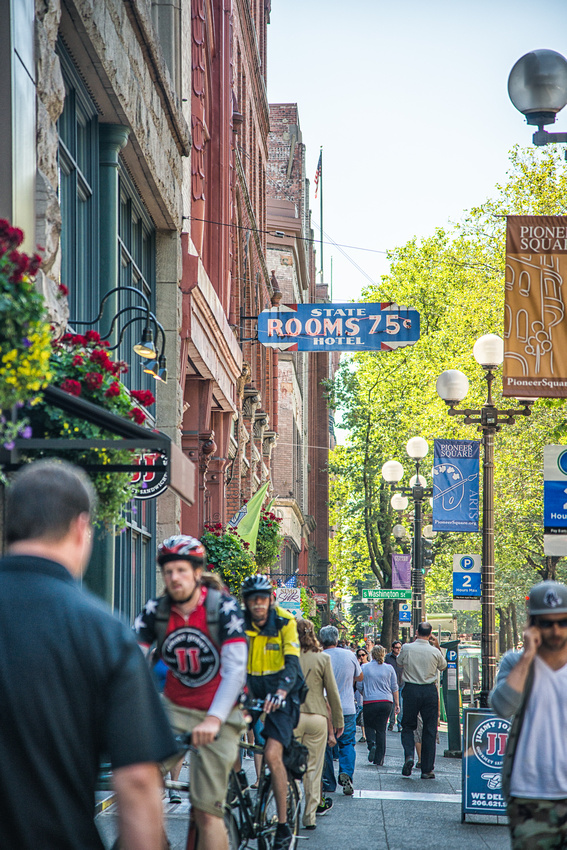 The State Rooms Hotel Sign is a local landmark in the pioneer square section of downtown.  The hotel opened in 1911 as a bachelor hotel but has been abandoned for many years. 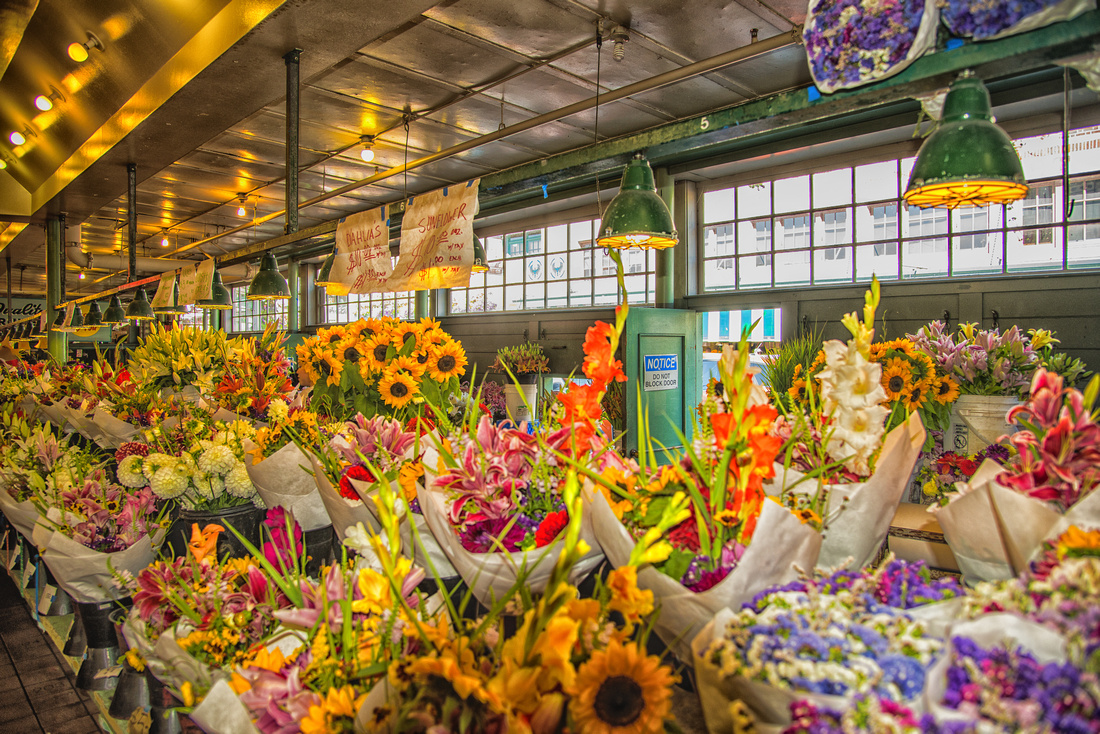 A flower stand at Pike Place  Market.  Pike Place Market is a public market overlooking the Elliott Bay waterfront in Seattle.  The Market opened in 1907 and is one of the oldest continually operated public farmers' markets in the United States.  I liked all of the colourful flowers. 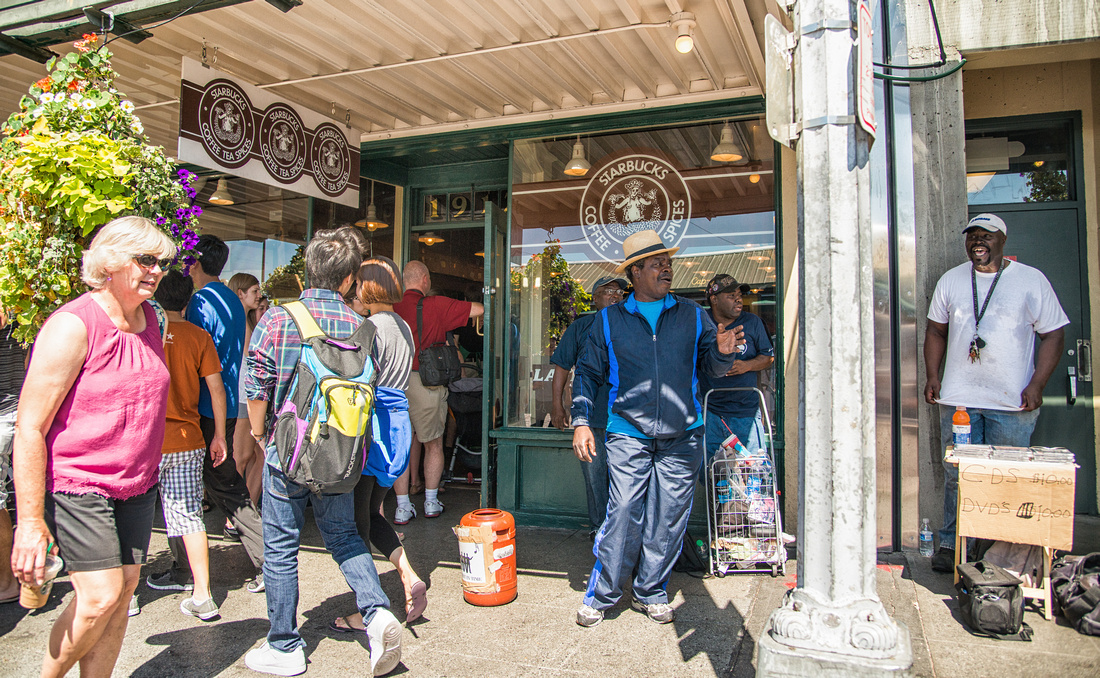 The original Starbucks coffee shop located in Pike Place Market.  This store opened in 1971 and the company was a single store. 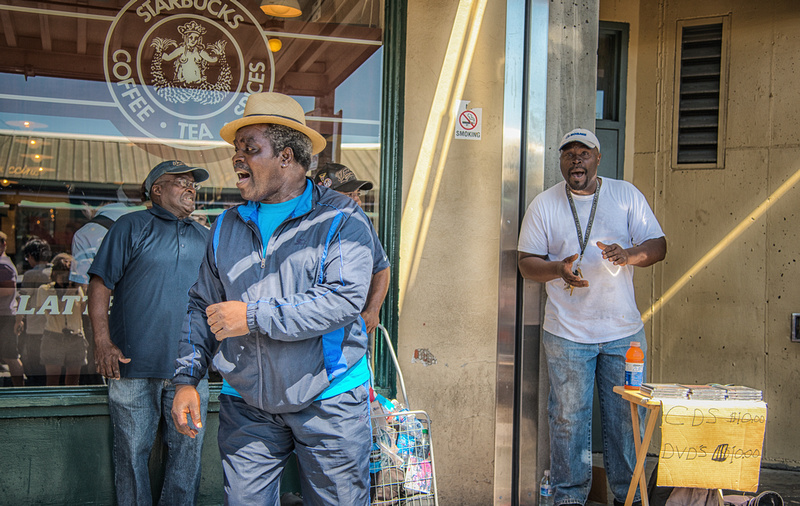 These street performers  sing in front of the store and sell their CD's.  They were actually very good and it was fun listending to them. 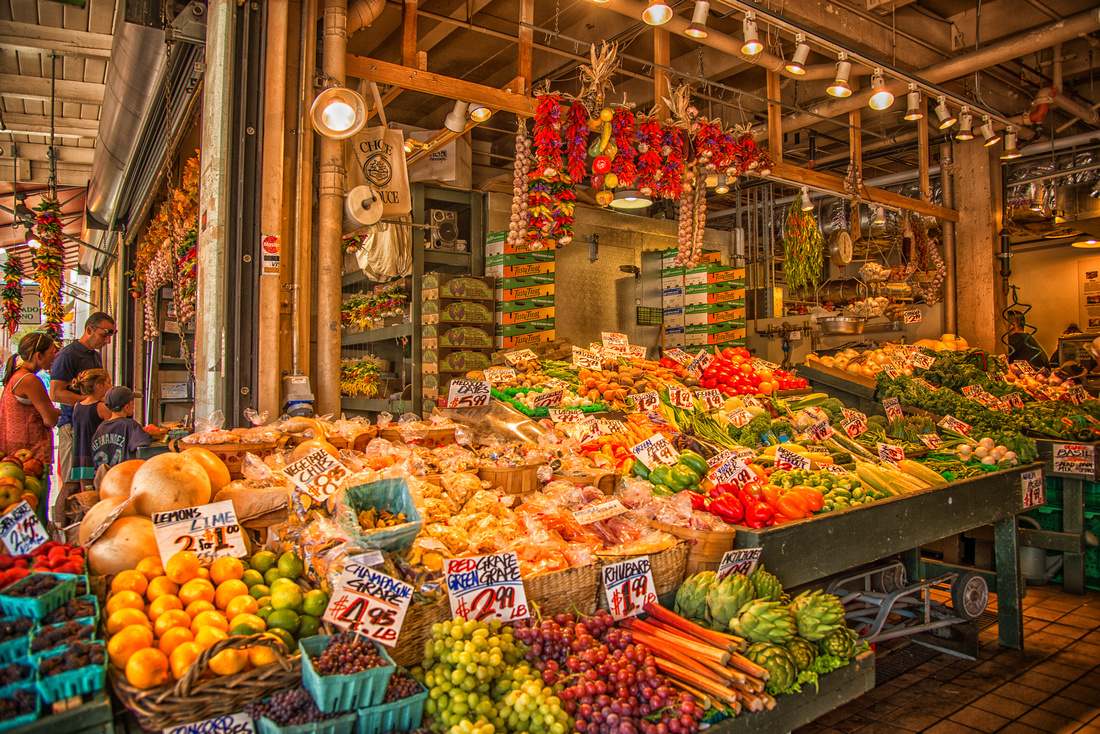 We wandered around the market and I took a picture of this outside fruit stand. 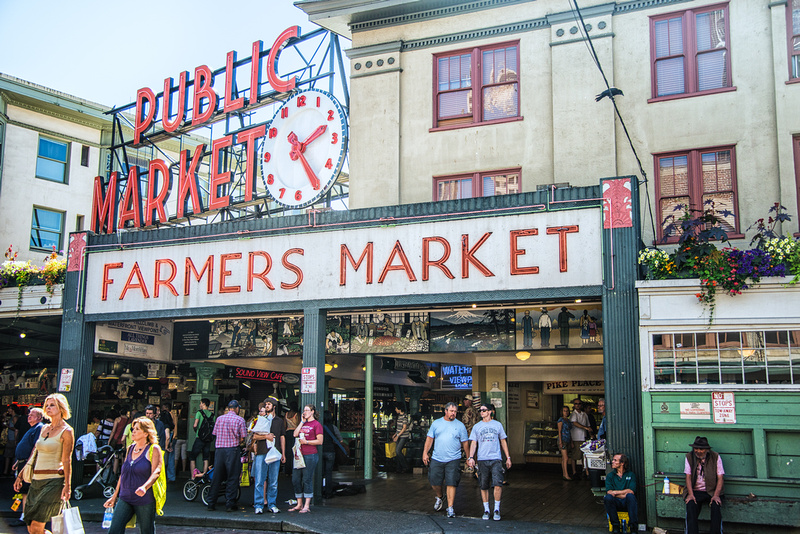 I had to include a picture of the entrance.