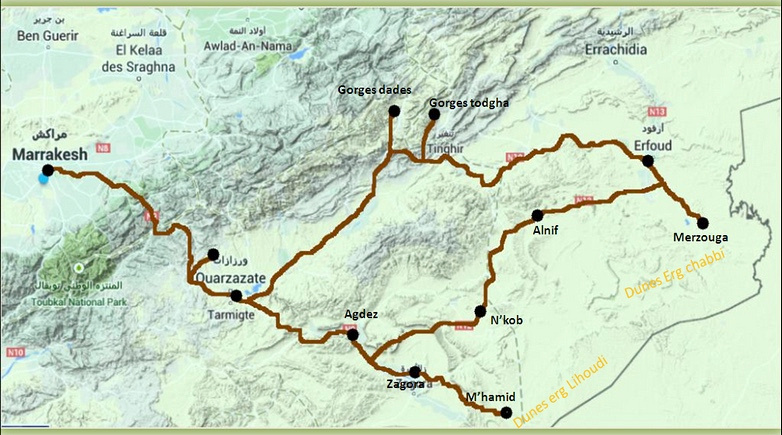 The above map shows our drive for the day.  Starting in Marrakesh we drove to the Sahara Desert driving across the High Atlas Mountains ending in Ouarzazate.   Along the way we saw some magnificent scenery. 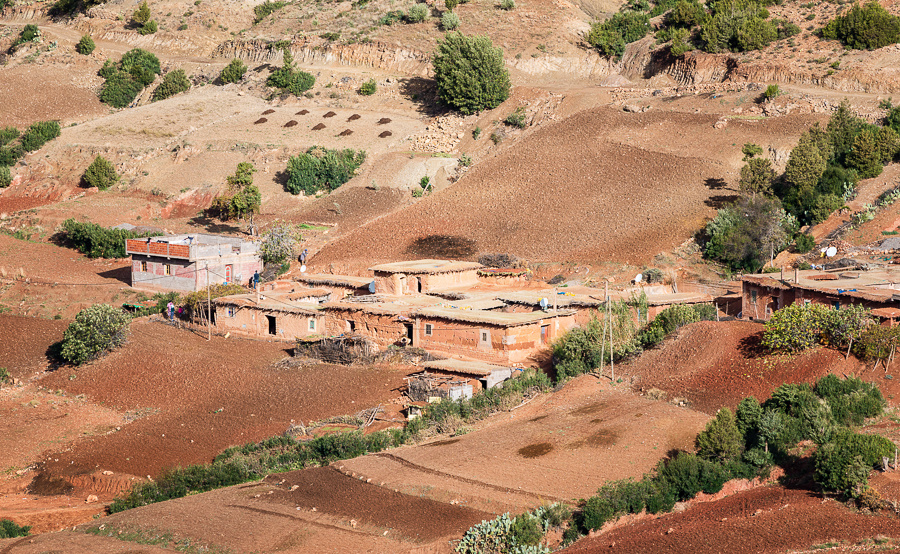 As always, I wanted to keep stopping to photograph some of the scenery however, we did have somewhat of a time limit as we had a lot of distance to cover.  These houses just blended right into the geography. 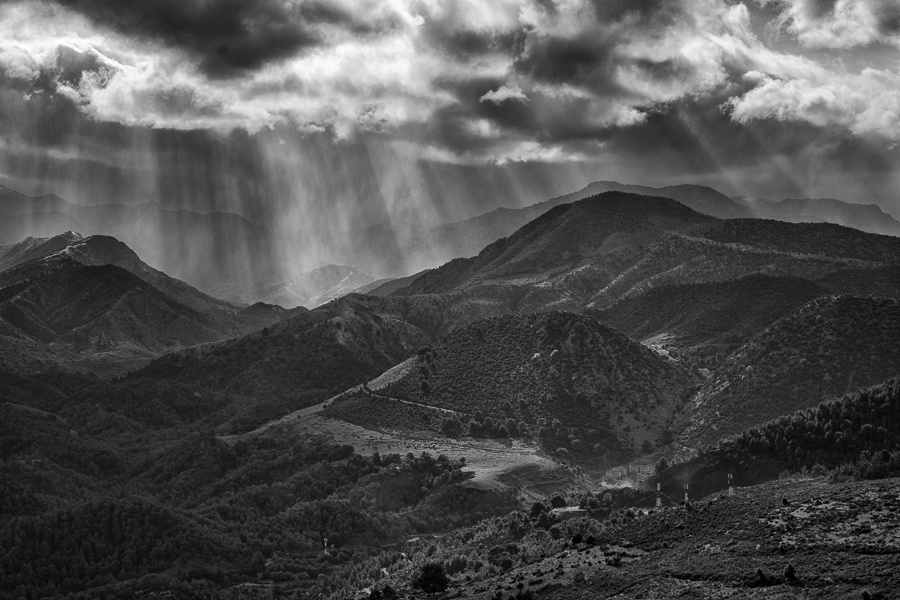 Driving through the High Atlas Mountains we came across some pretty severe weather.  This range of mountains stretches around 2,500 km (1,600 mi) through Morocco, Algeria and Tunisia. 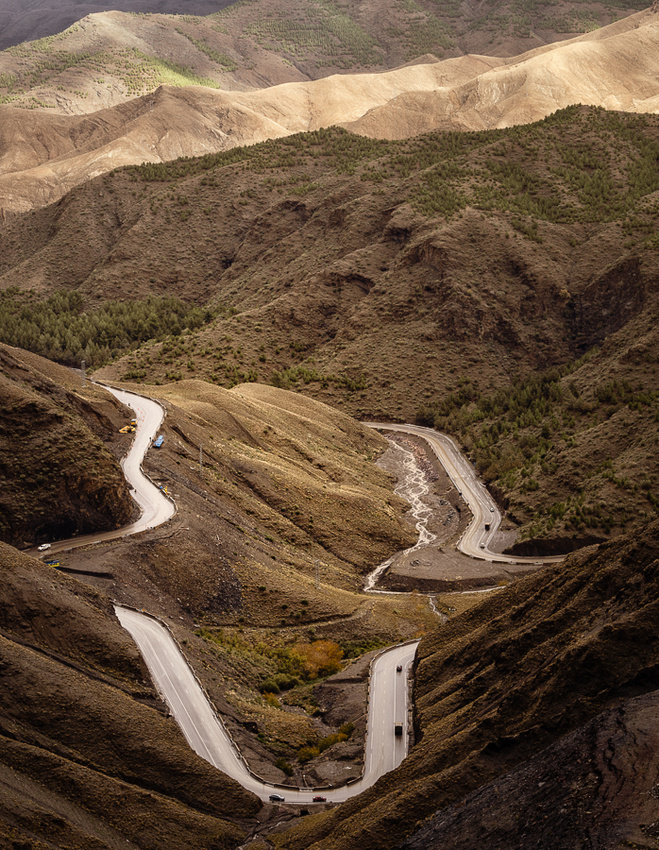 We stopped at Telouet Kasbah for lunch.  In Morocco,  a Kasbah frequently refers to multiple buildings in a citadel or several structures behind a defensive wall.
This Kasbah was the seat of the El Glaoui family's power and was built in the 18th and 19th century.  As you can see the palace is collapsing but in 2010, work was underway to restore the property.  This palace is located on the outskirts of the small Berber village of Telouet. We were at an elevation of about 5,900 feet so it was quite a bit cooler than Marrakech. 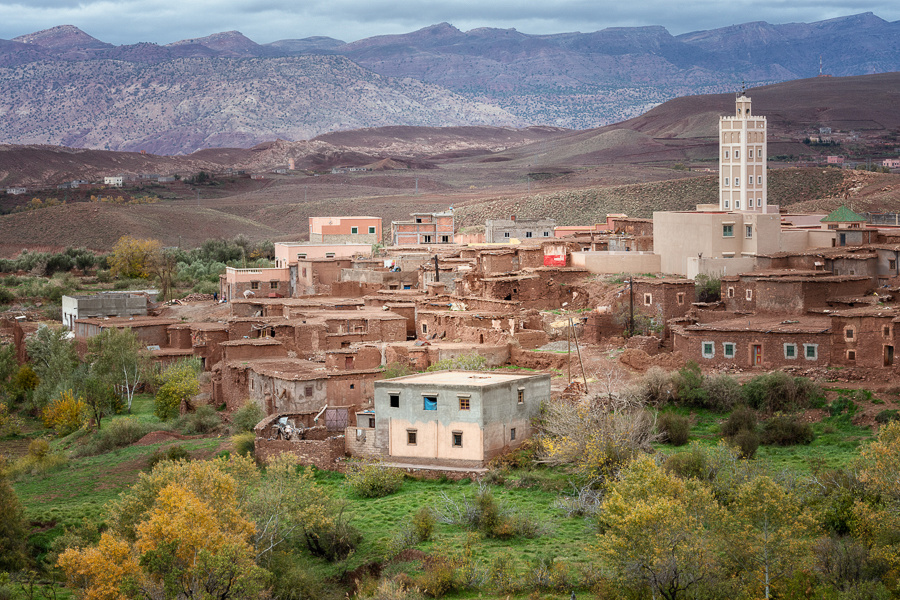 A view from inside of the Kasbah. 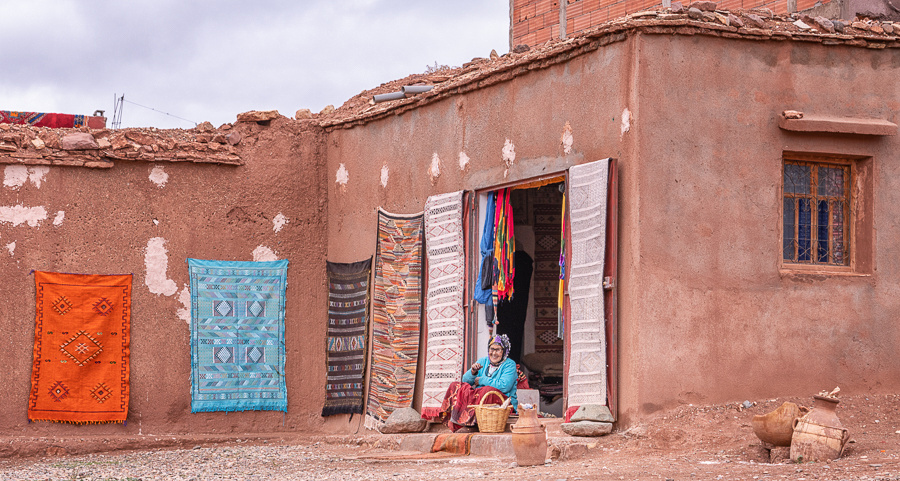 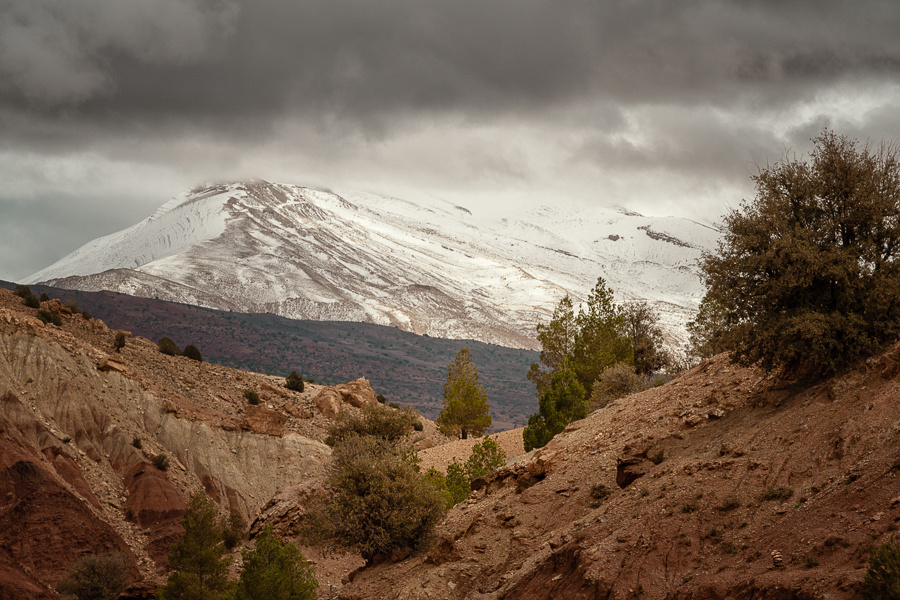 After a delicious  lunch we continued our drive through the mountains.

We stopped a few times to check out the surrounding areas.  I was happy that we weren't driving on this road- our roads were very good. 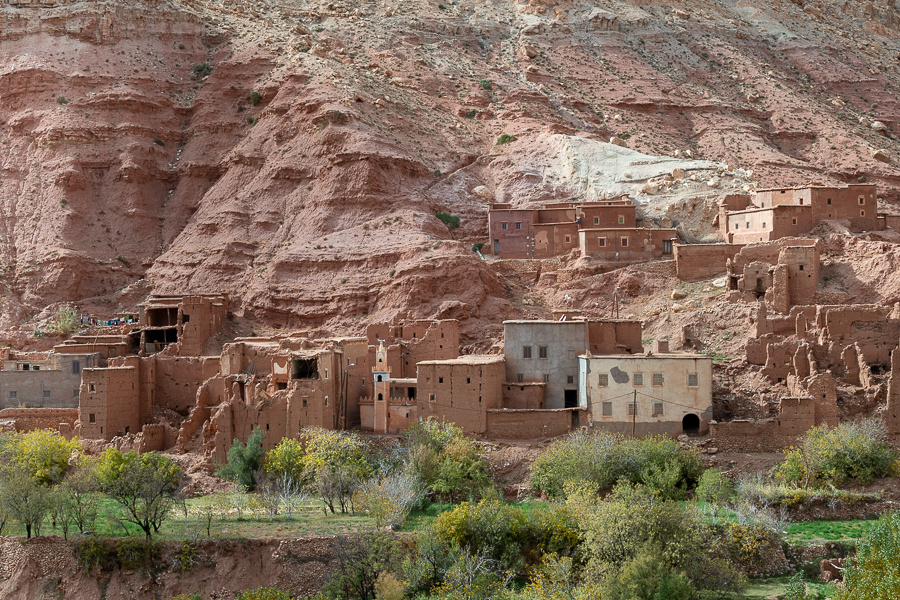 Here was a small town/settlement built right into the mountain which was prevalent through this area. 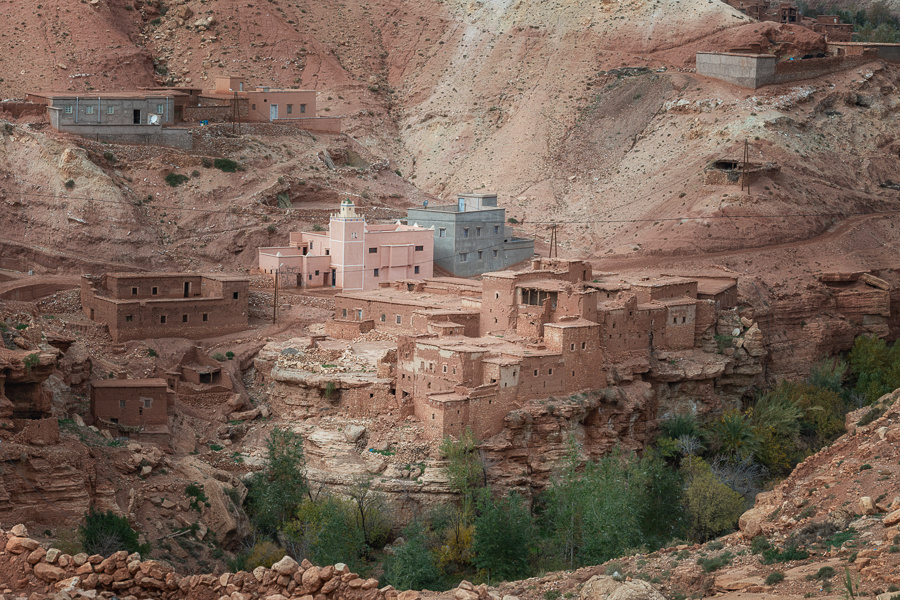 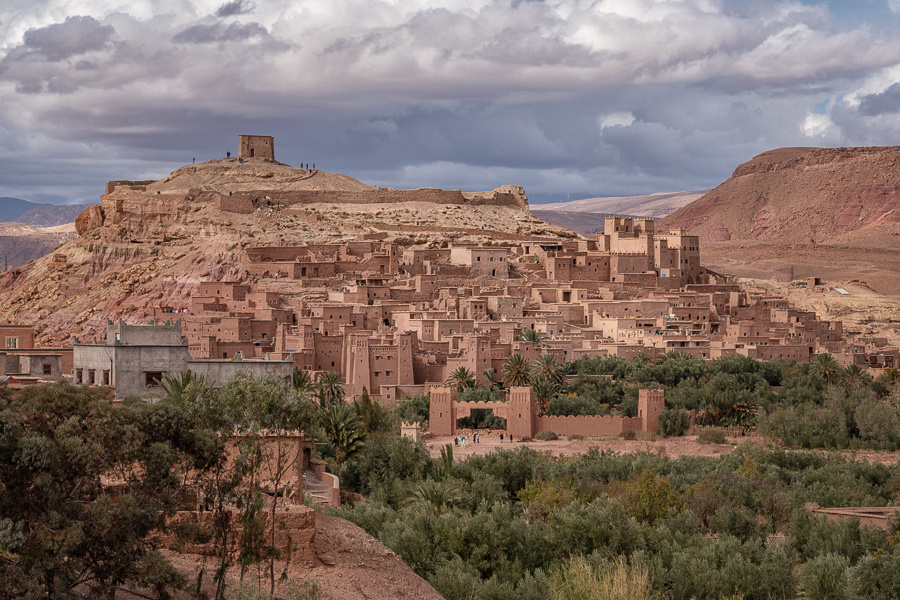 Later in the afternoon we arrived at one of the most impressive and well-preserved kasbahs, the Ksar of Alt Ben which is a UNESCO World Heritage site.      A Ksar is the North African term for "Berber  castle" normally refers to a Berber fortified town.   We stopped to photograph the overlook before heading into the fortified village.  This Ksar as been used as a   film location in many famous films such as Gladiator, Alexander, The Man Who Would Be King, Lawrence of Arabia, The Mummy, Kundun, The Jewel of the Nile and parts of the TV series,  The Game of Thrones. 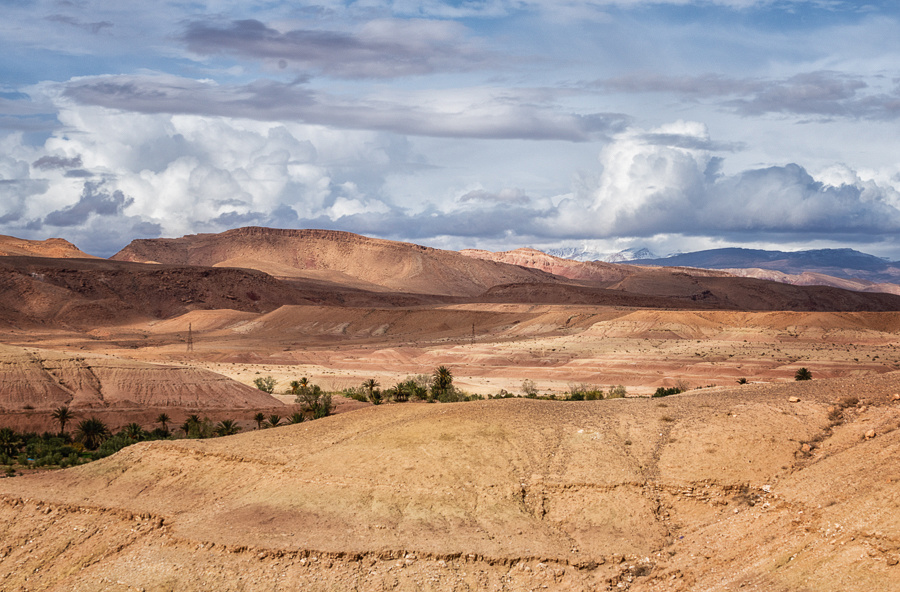 I took this photo looking away from the village. 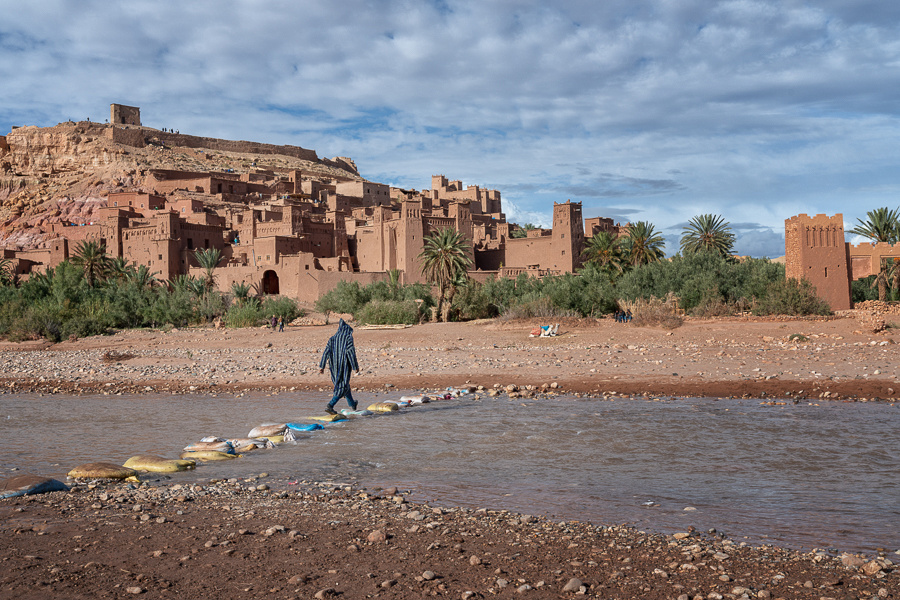 When we got to the river, we had to cross over to the Ksar.  Our guide made it look so easy.   However the water was not all that calm. 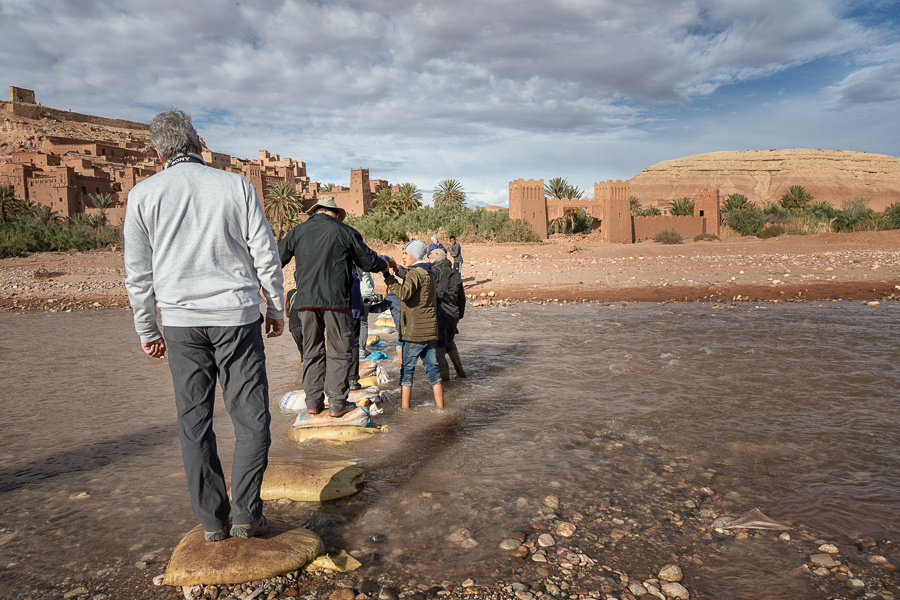 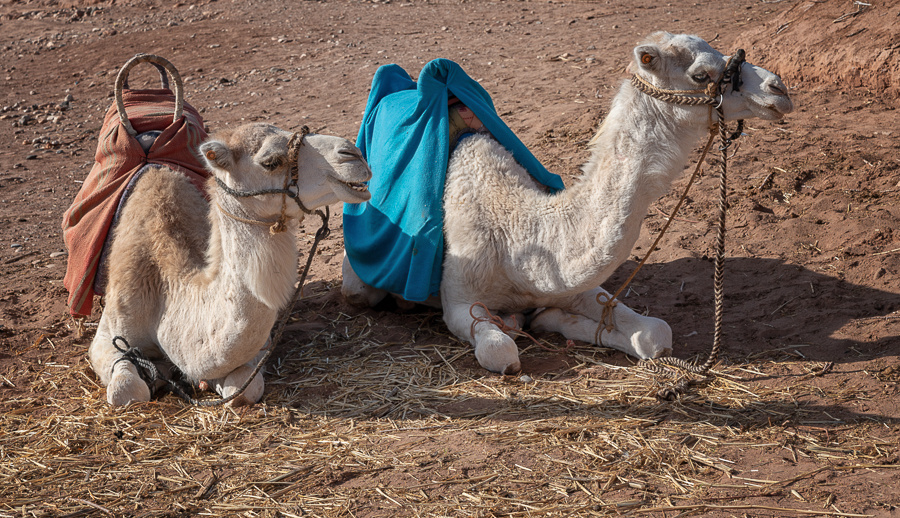 My first close up look at the camels in Morocco. 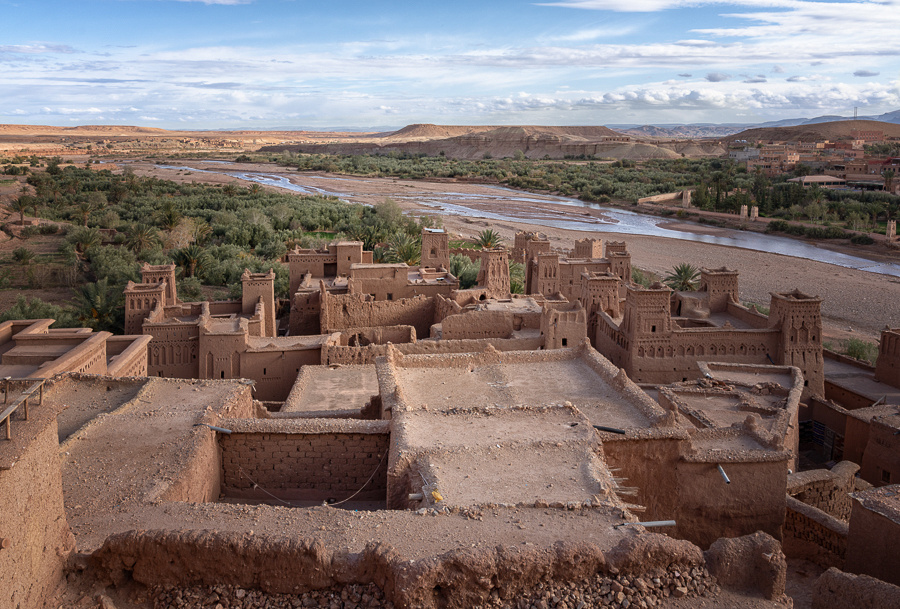 This was the view from the top of the Ksar, overlooking the village.  Inside the walls of the Ksar  are  half a dozen Kasbahs (or merchant houses) and other individual dwellings.  Most citizens live in more modern dwellings in a village on the other side of the river although there are still four families living in the ancient village. 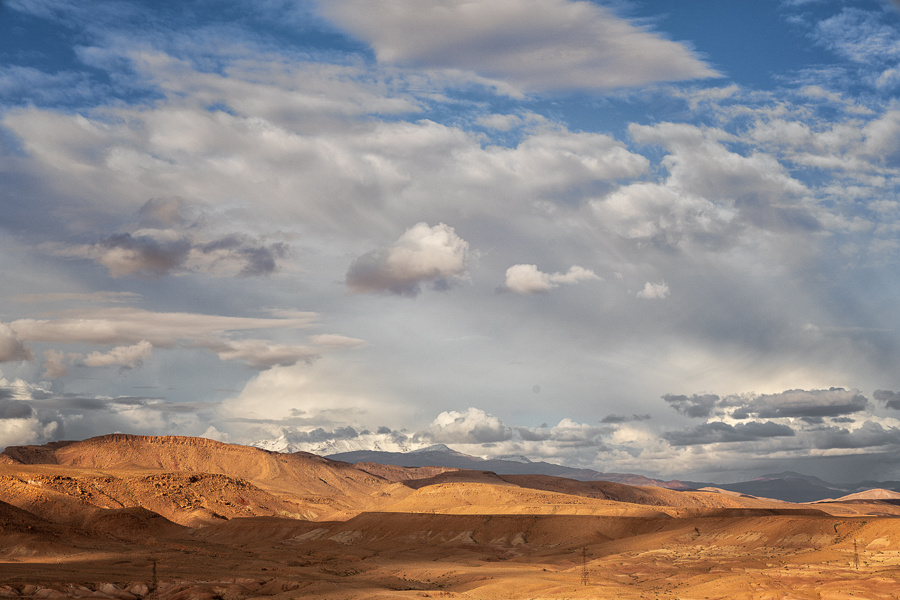 Another view from the Ksar. 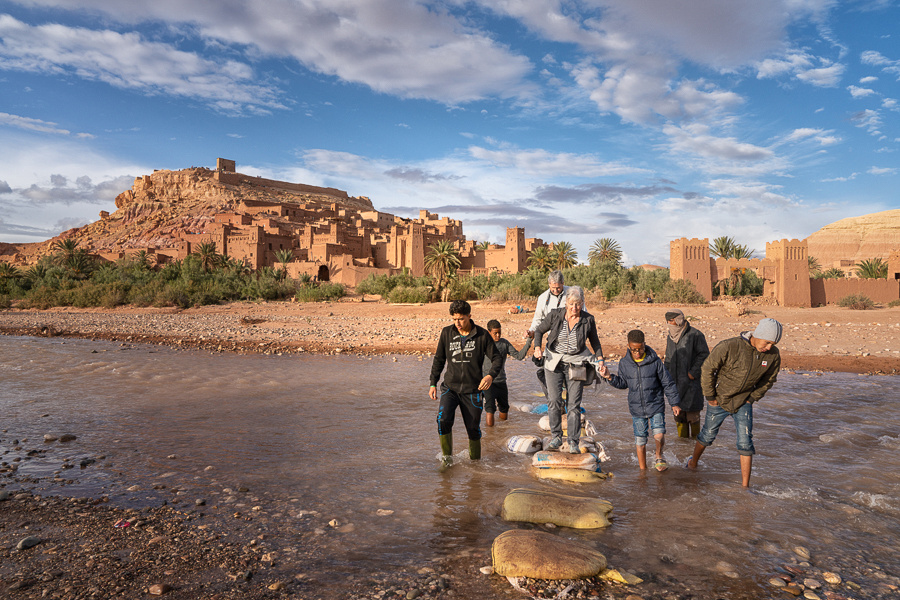 Eventually it was time to cross the river again- fortunately, the kids were still around to help us. 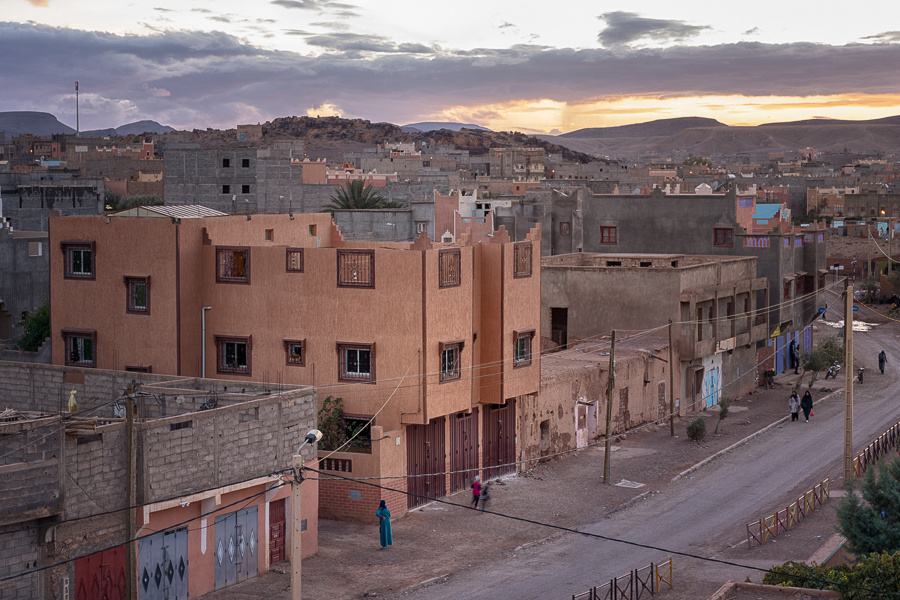 Our last stop of the day was in the town of Ouarzazate.  This was a view from the top floor of our riad (hotel).    A riad is a type of traditional Morocan house or palace with an interior garden or courtyard.  Ouarzazate is nicknamed "The door of the desert "because to the south of the town is the desert.  This town is an important holiday destination in Morocco since it is a base for excursions across the Draa Valley and into the dessert.  The riad that we stayed in was beautiful although you wouldn't know it from looking at it from the street.    There was an open courtyard in the center with the rooms overlooking it.  Dinner was really good as well.  In my last blog, I'll show some photos of the food taken with my I-phone.