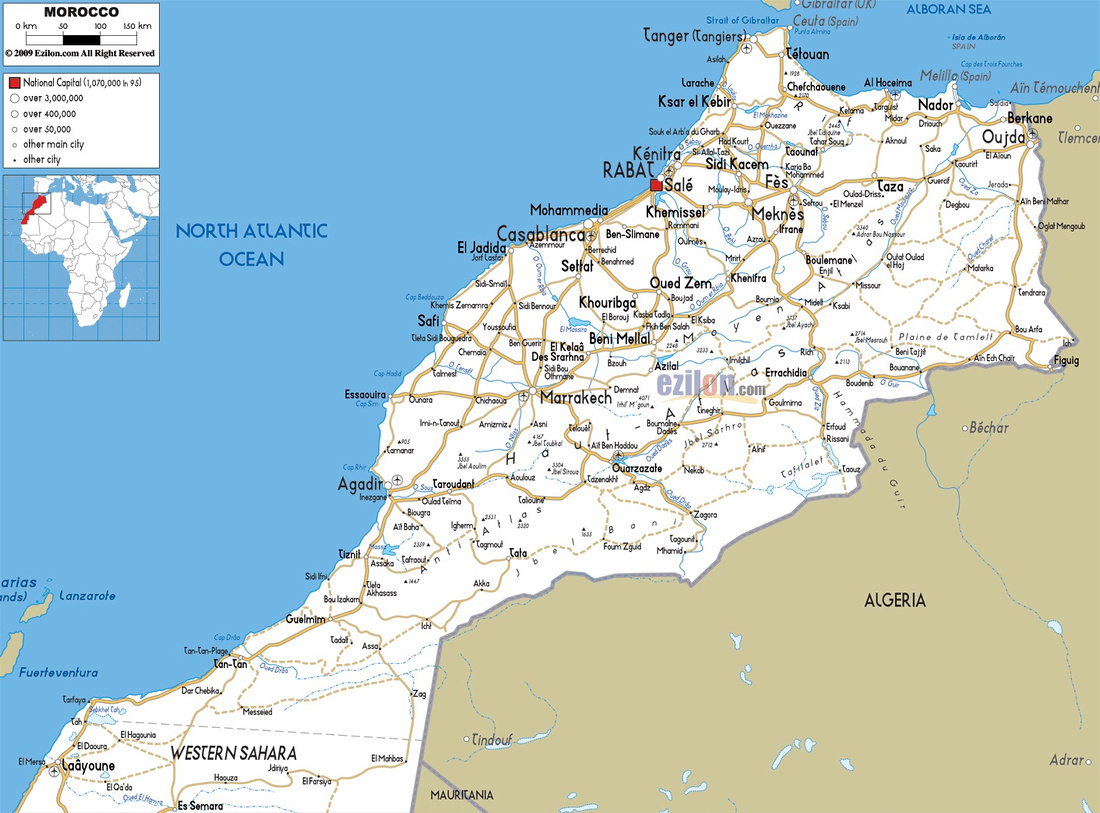 Essaouira is located on the North Atlantic Ocean.  On the map you can see the coastal town just north of Agadir, about 2/3rds down the map.  During the Middle Ages, a Muslim named Sidi Mogdoul was buried in Essaourira, probably giving the city the original name of Mogador. In 1506, the king of Portugal ordered a fortress to be built here.  The fortress fell to the local resistance of the Regraga fraternity in 1510, just four years later.  During the 16th century, powers including Spain, England the Netherlands and France tried without success to conquer the city as it was a haven for the export of sugar and molasses.  Pirates were also known to take refuge in this city. 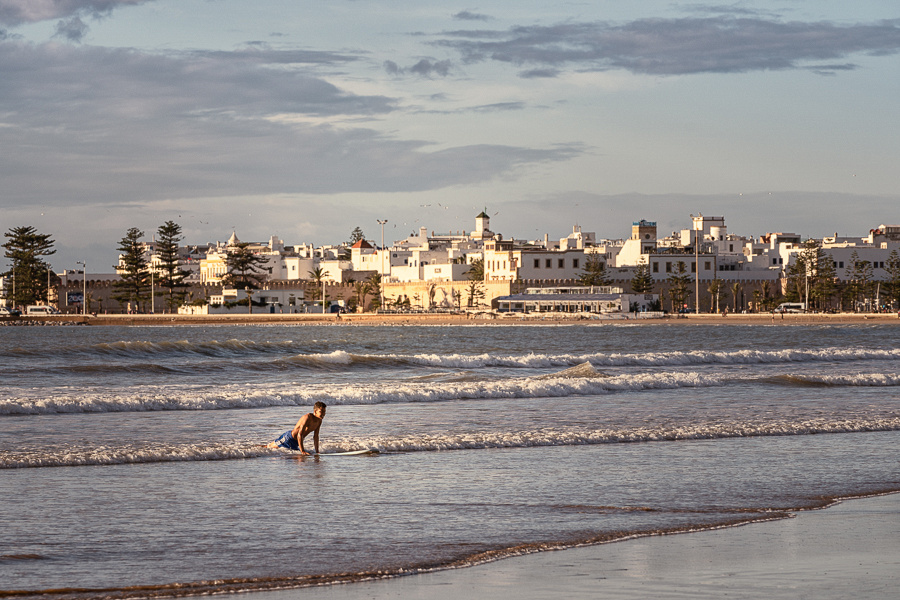 The present city of Essaourira was built during the mid-eighteenth century by the Moroccan King.  The King wanted to increase trade with Europe choosing Mogador as his key location.  One objective was to establish a harbour at the closest possible point to Marrakesh.  The other was to cut off trade from Agadir (see map above) in the south which had been favoring a political rival of the Moroccan King.  The people of Agadir were forced to relocate to Essaourira.  I was very happy to see this coastal town and walk along the beach.  We stayed at a beautiful hotel just across the street from the beach. 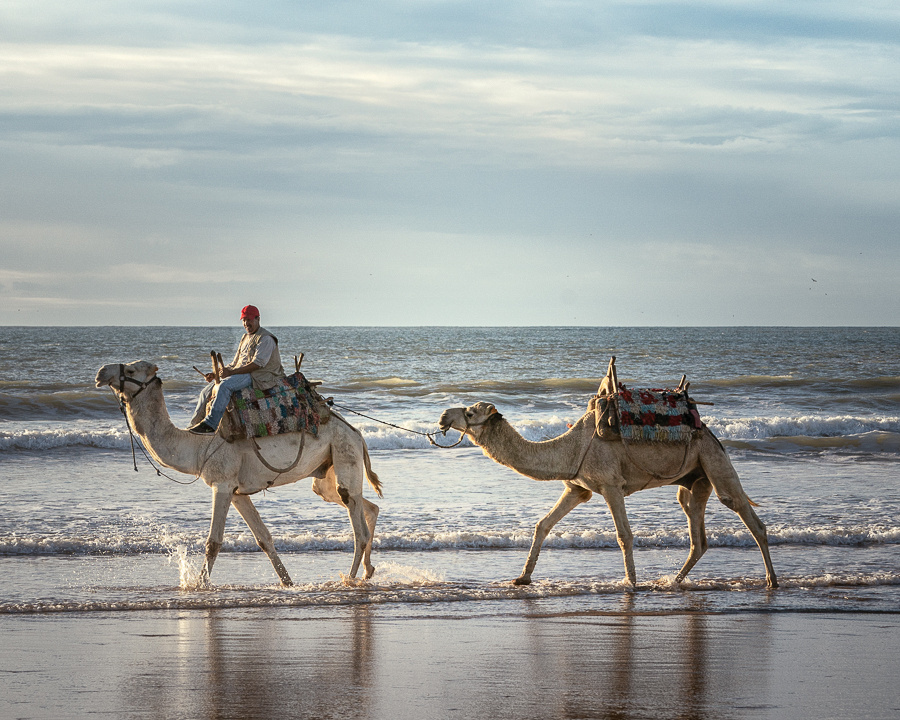 We spent a couple of hours walking on the beach waiting for sunset.  There was a lot of action here- surfers and camel and horse rides.  It was definitely a place for people watching.  However, if you wanted to photography any of the riders, you were expected to pay. 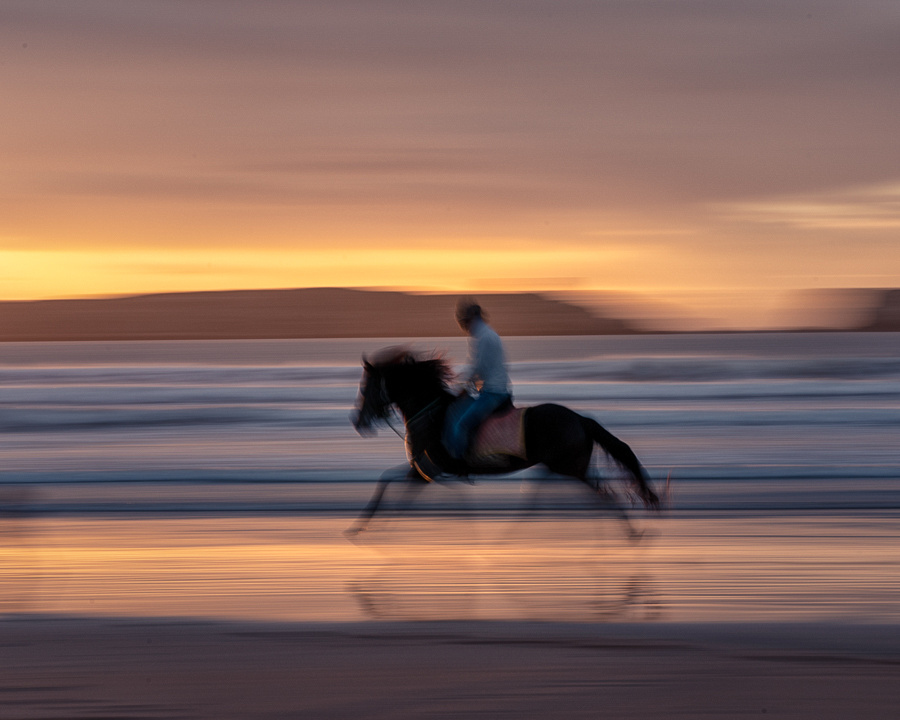 I had fun photographing the horses and tried out some panning shots.  Rosa hired a rider to ride back and forth while we made all kinds of fun photos and watched the gorgeous sunset. 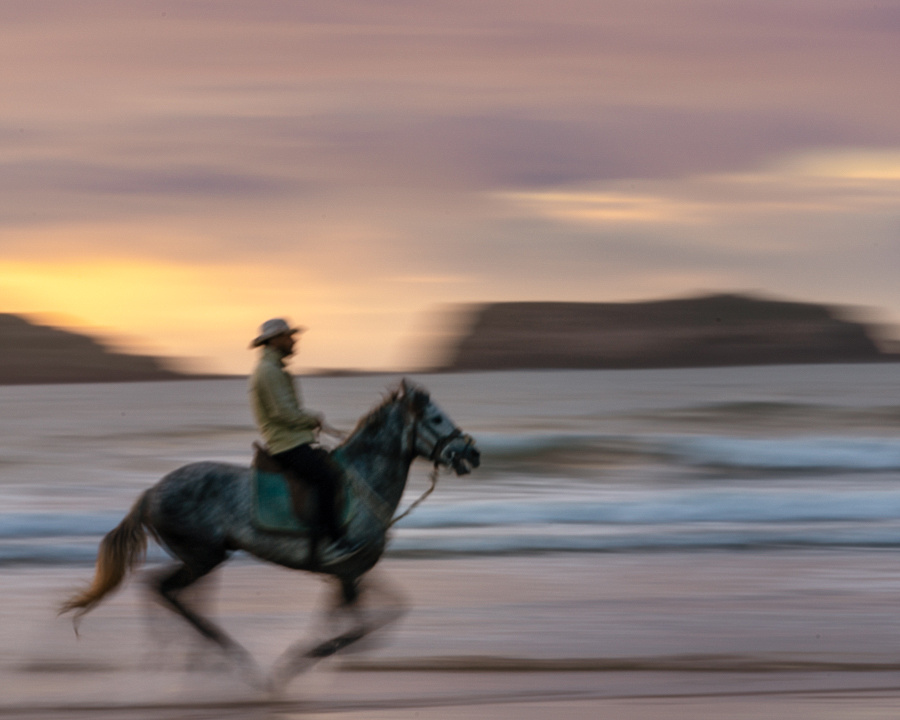 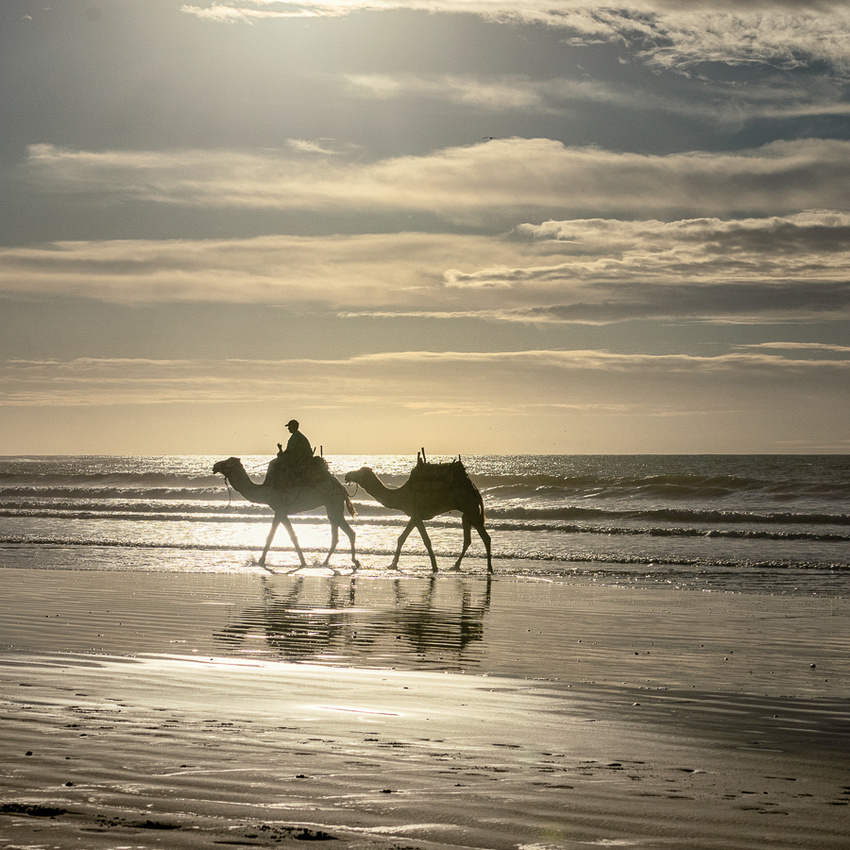 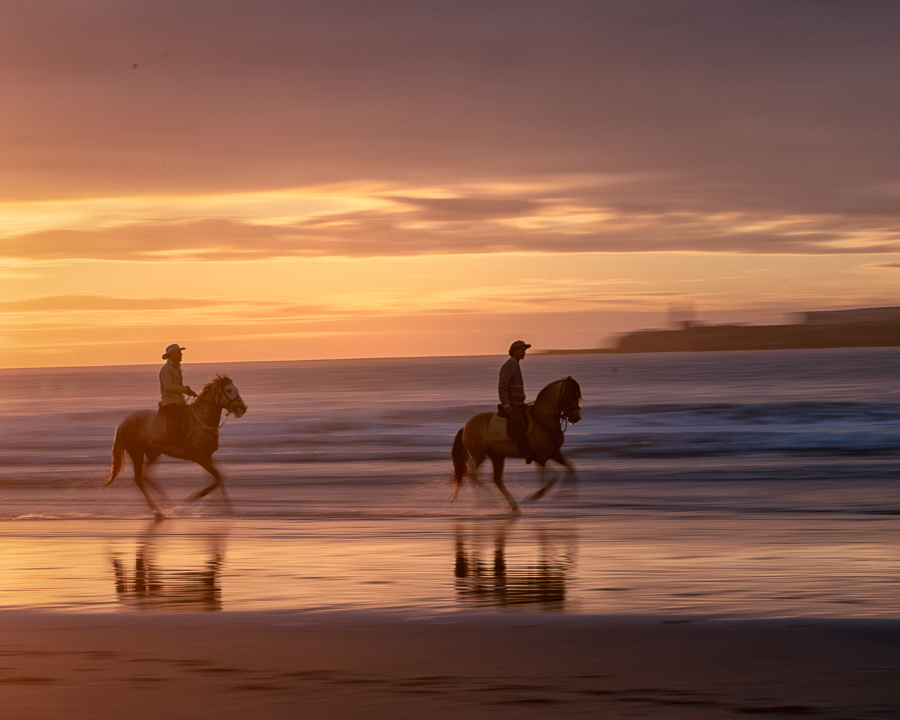 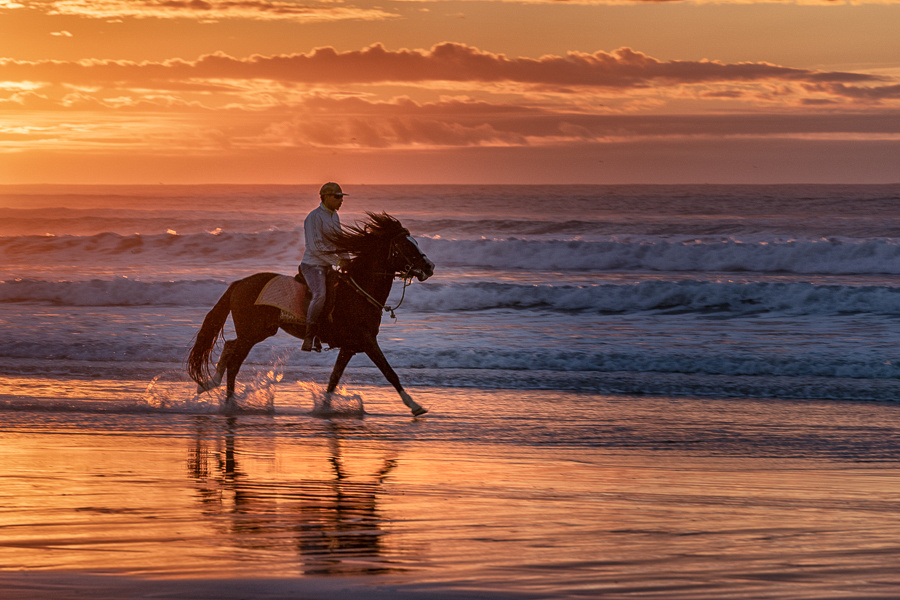 The colors actually looked like this- that is how colorful the sky was. 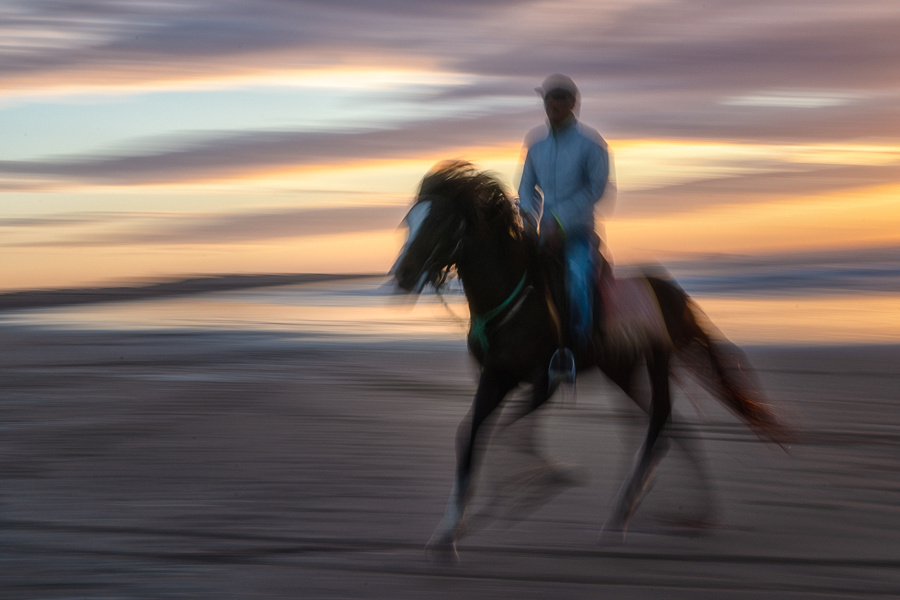 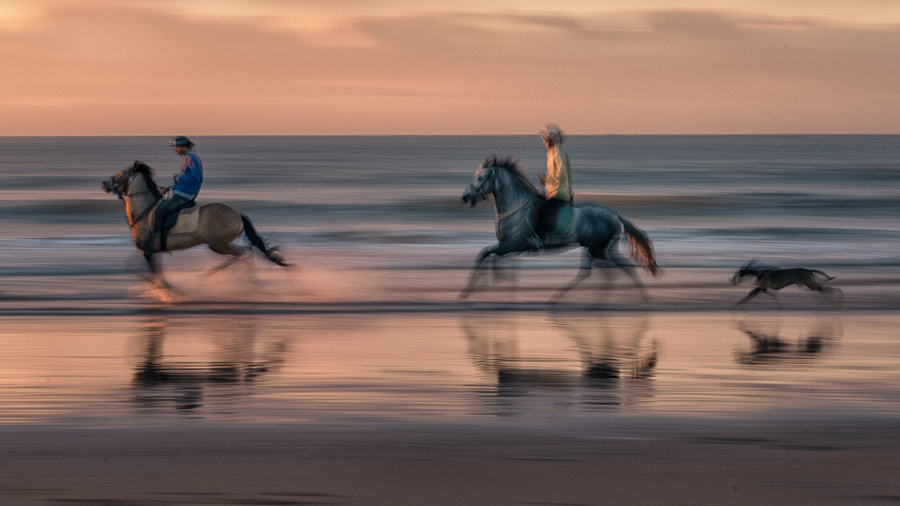 Bonus for us as other riders and their dog joined in the fun. 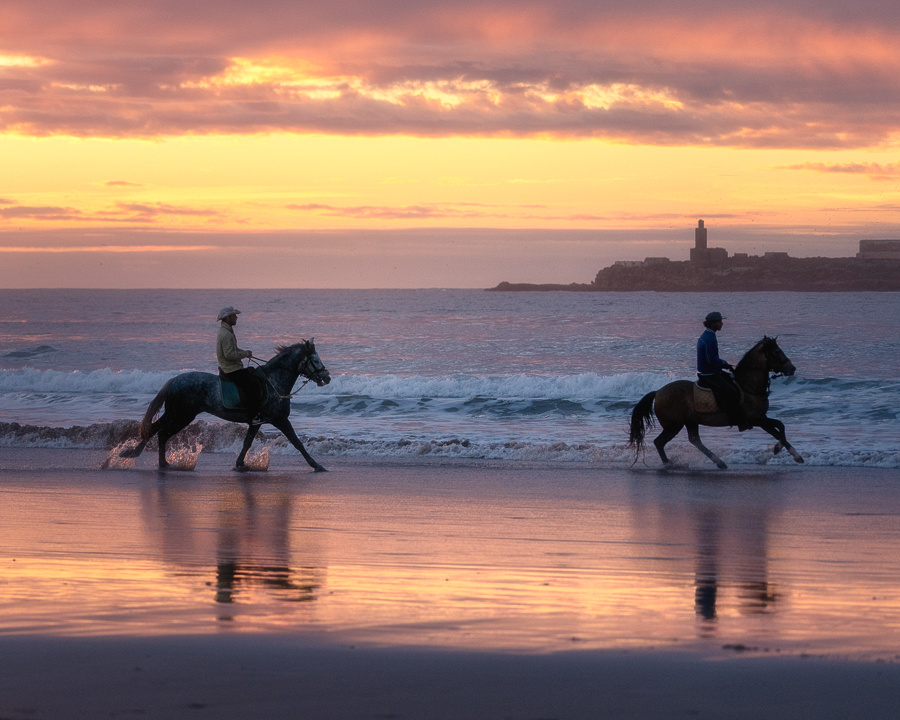 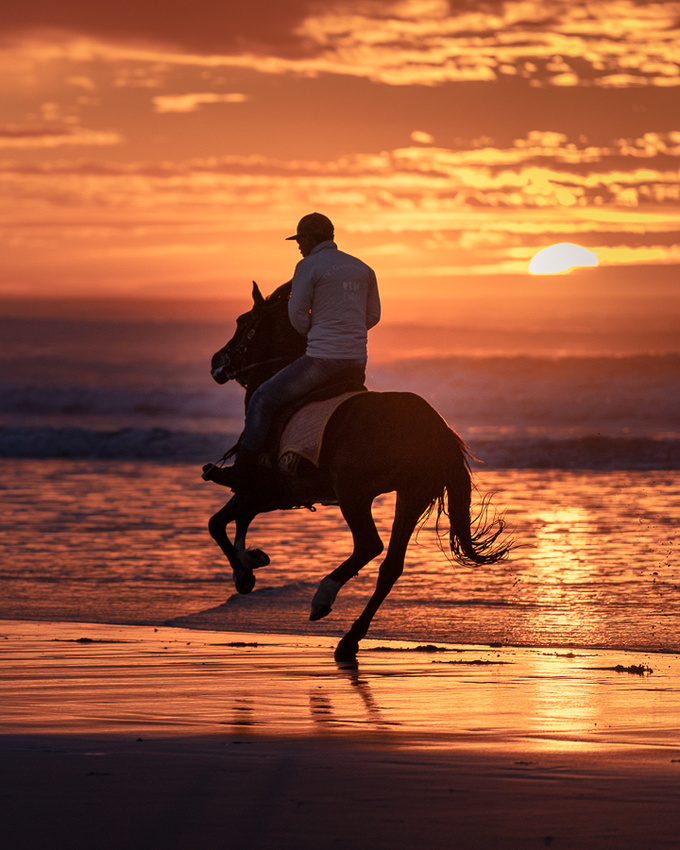 The four riders and their horses. 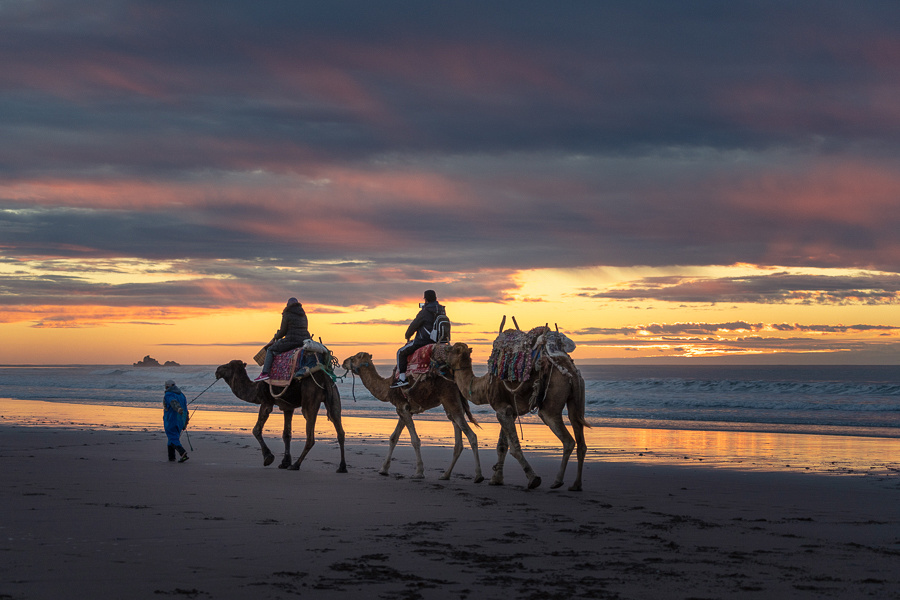 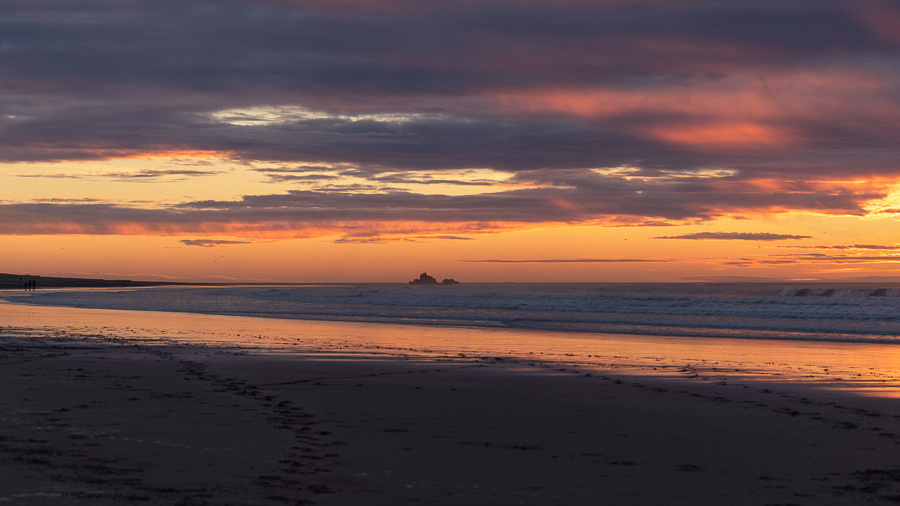 The last shot of the evening before we went to dinner. 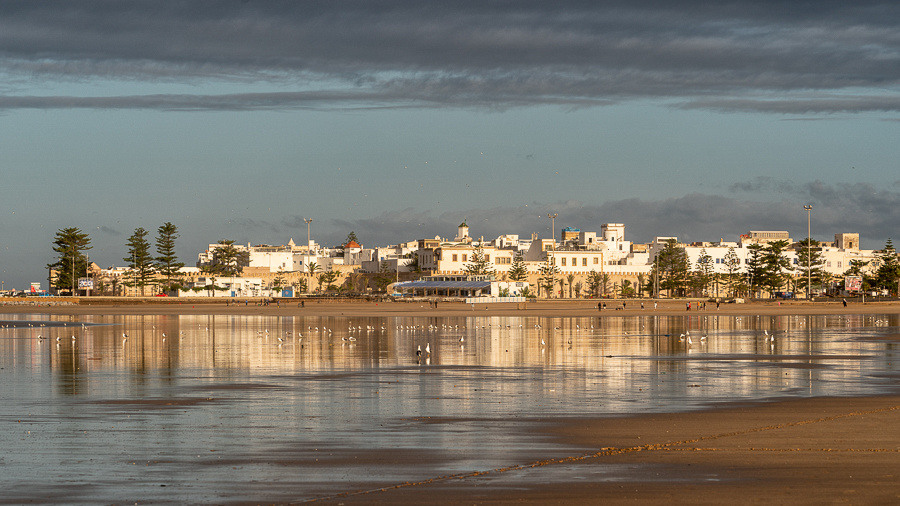 The next morning we explored the town.  We walked over to watch the fishermen bring in the fish from the sea and this was our view on the way over.  Through out the years France had an important administrative, military and economic presence in Essaourira.  Many Moroccans in the town speak French fluently today. 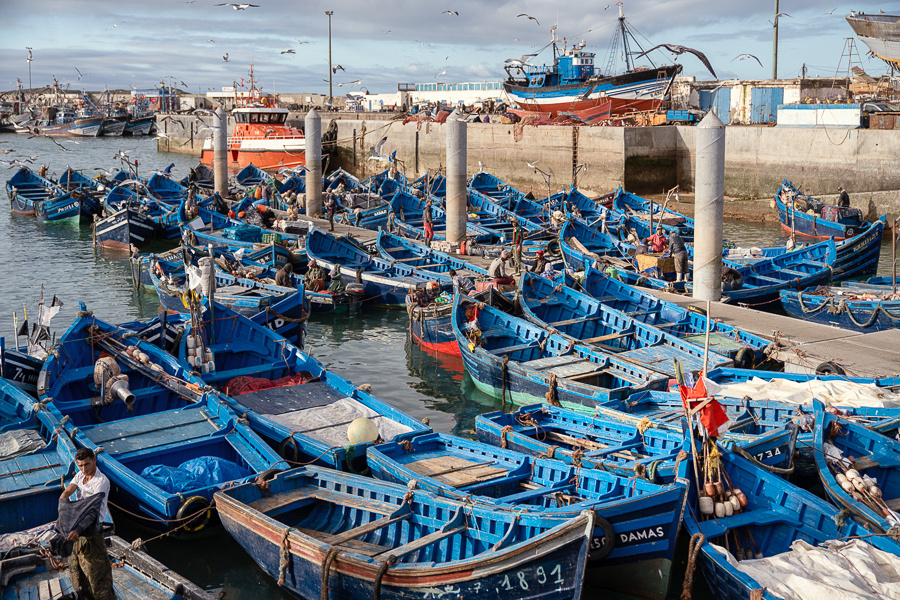 The harbor was one busy place.  I like how all of the fishing boats were the same color. 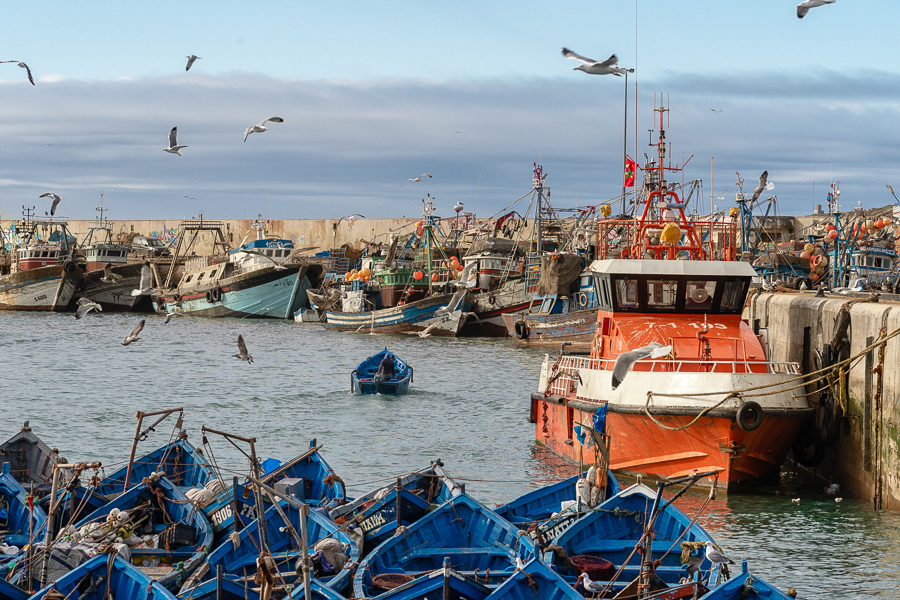 The seagulls were everywhere looking for food. 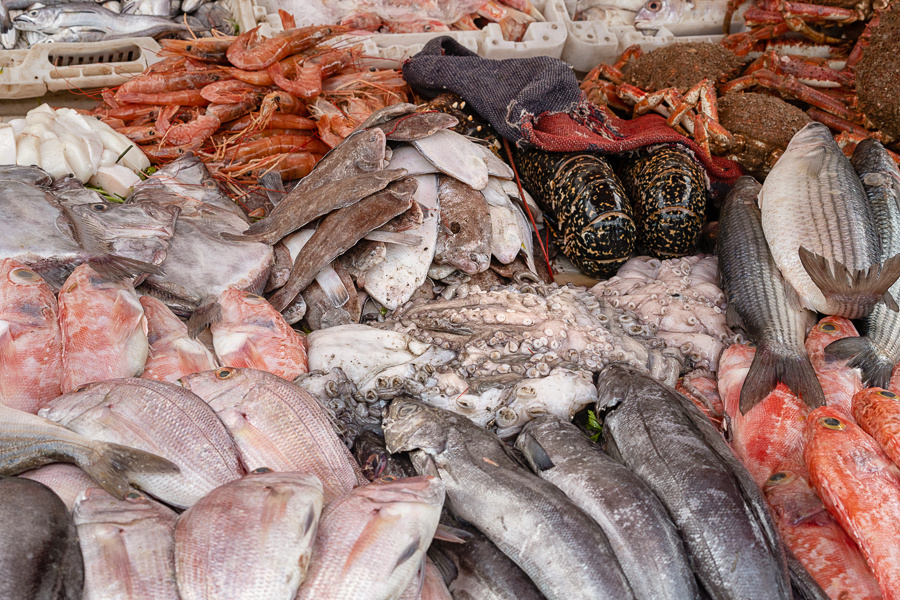 All kinds of fresh fish for sale. 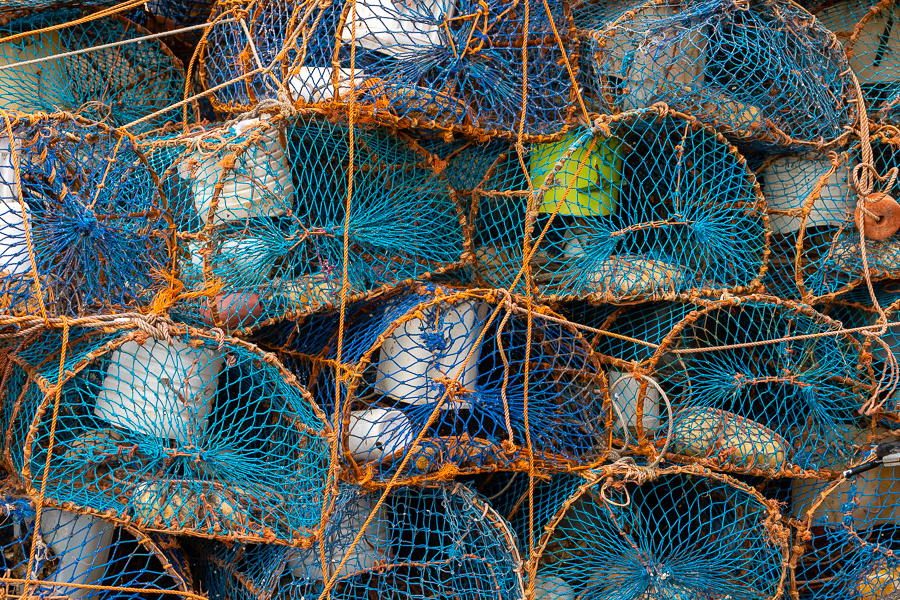 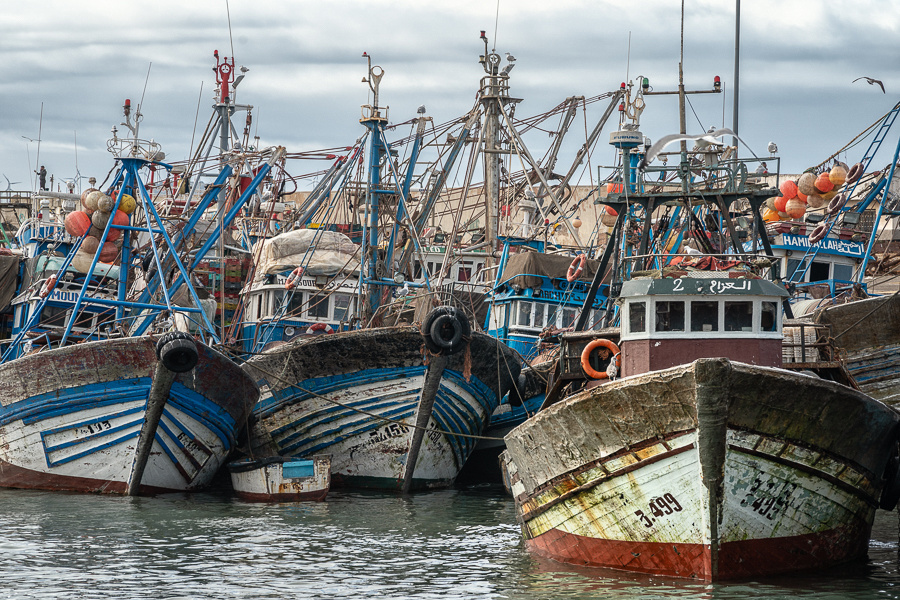 Some of the larger fishing boats used. 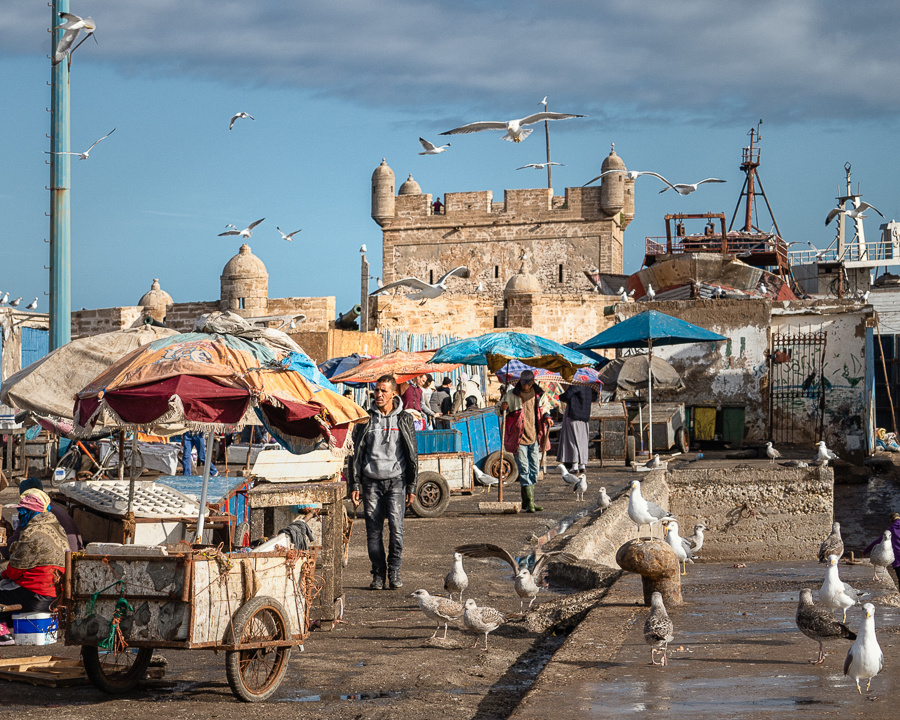 From the time the city was rebuilt  by Muhammad III until the end of the 19th century, the city served as Morocco's principal port, offering the goods of the caravan trade to the world.  The route brought goods from sub-Saharan Africa to Timbuktu, then through the desert and over the Atlas Mountains to Marrakesh.  The road from Marrakesh to Essaourira is a straight line which is the reason the king favored this city as the main port.

Next blog-  a trip to the Medina.

Tricia Matheson(non-registered)
Outstanding! Those beach shots were magnificent. Essaouira! Who knew?
Maureen Nilsson(non-registered)
This blog is really exceptional. Just when I think I have a favourite, I see another shot and then it becomes my favourite and on and on. I love the panning shots especially knowing how hard they are to take. You've really outdone yourself here. Thanks for sharing.
Lynn Muller(non-registered)
Wow! I cannot pick a favourite here. These are, as a group, my most favourite pictures. You captured, not only the beauty of the land and town, but the lifestyle of the people in an almost personal way. I really enjoyed the panning with the horse and rider, especially with the sunset as a backdrop. Very enjoyable, Marsha!
Bill Porter(non-registered)
Well done as usual. A different place with a different scope. Well done
Gretchen Taylor(non-registered)
Panning shots...WOW! Particularly like the 2 horses/riders with the dog chasing behind.
Really nice work, Marsha. Difficult to photograph people in Morocco...but you still captured some great moments with the famous "reluctant" subjects!
No comments posted.
Loading...
Subscribe
RSS
Recent Posts
Melbourne Last blog of New Zealand Fox Glacier Haast Wanaka Queenstown and Glenorchy Moeraki Boulders and Milford Sound Penguins, Seals and Sheep Southern Alps, New Zealand Last evening in Chania
Keywords
Croatia Crete Morocco New Zealand South Island Cuba alberta National Park galapagos
Archive
January February March April May June July August September October November December
© Marsha Fouks