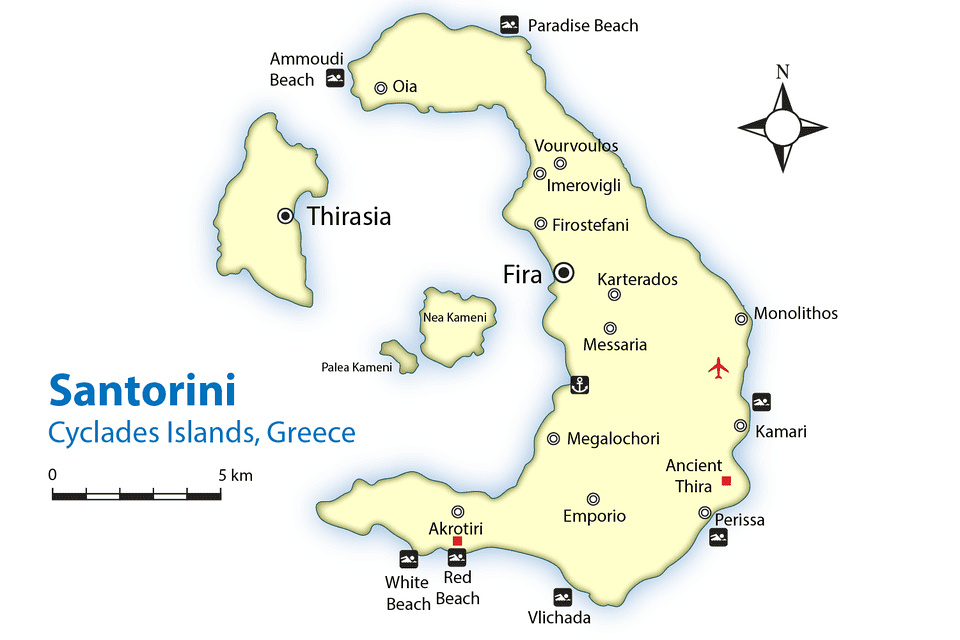 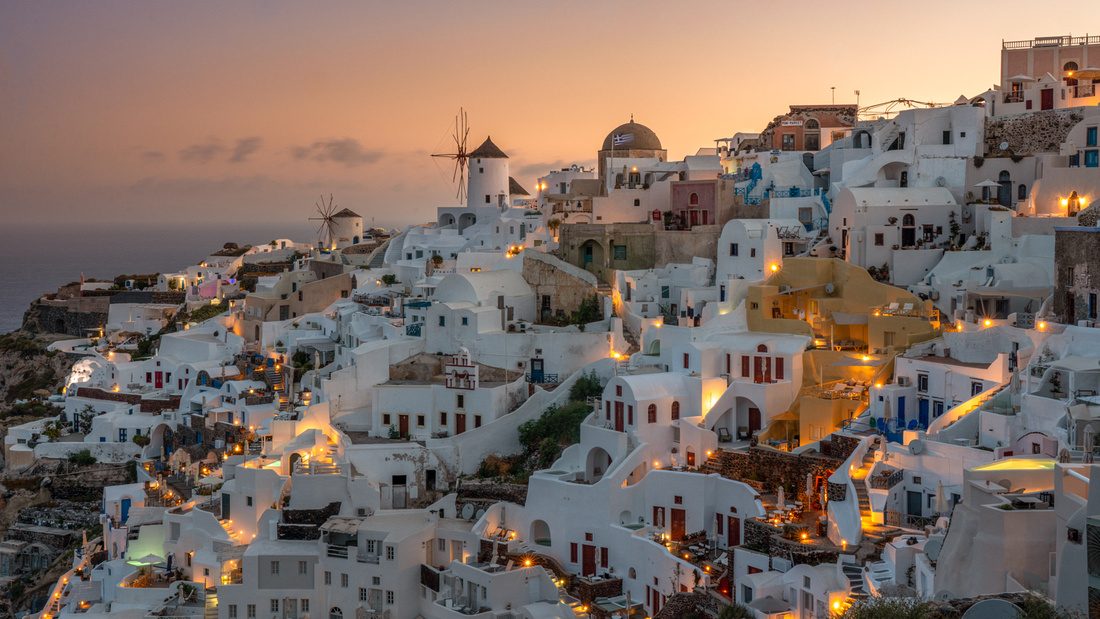 For our last full day on the island including the last sunrise, we agreed to return to Oia which was our favourite sunrise spot. 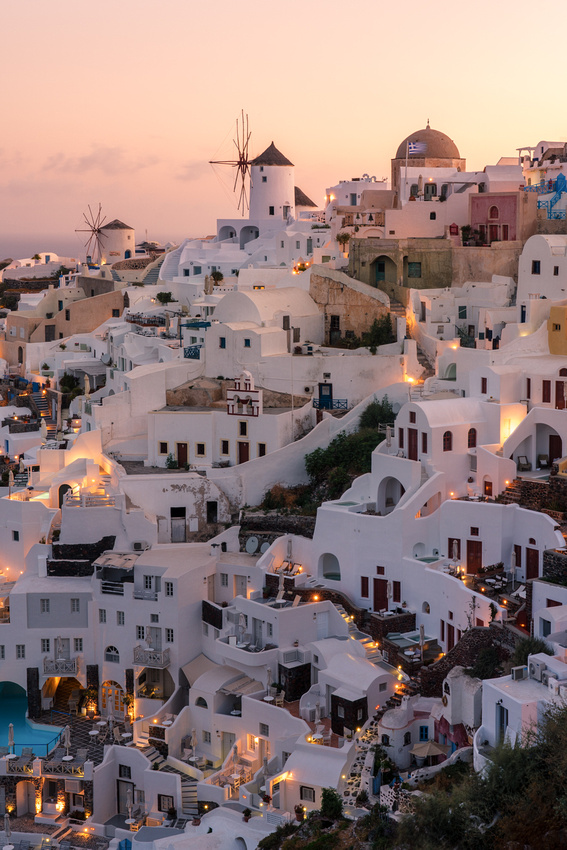 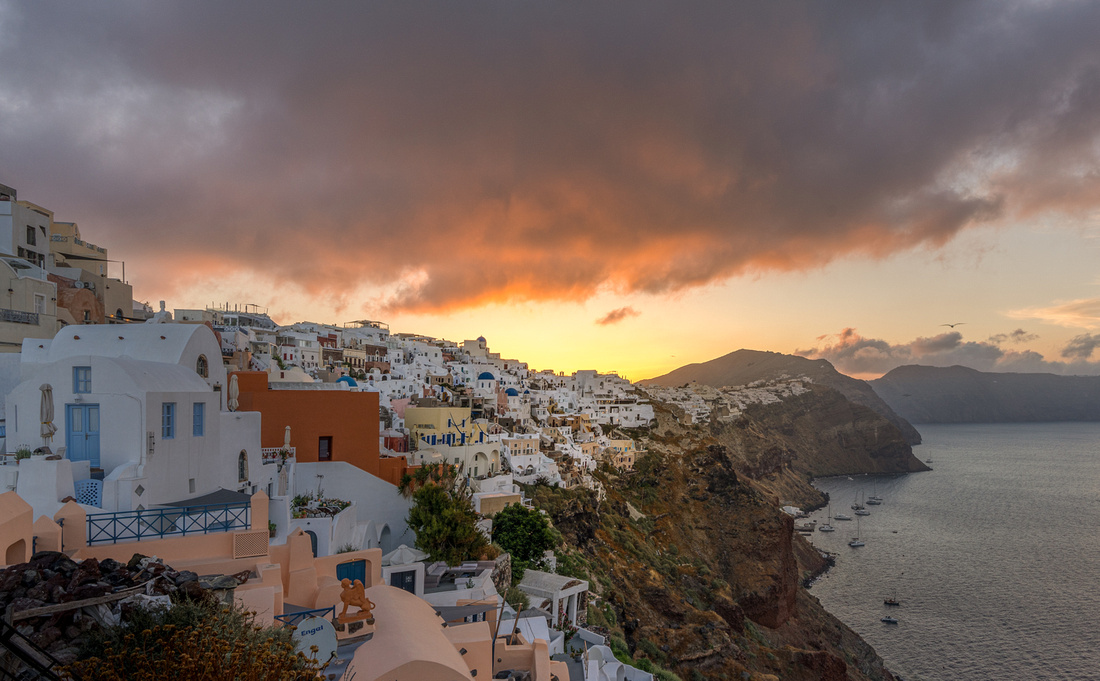 Every direction that we looked at had great views.  This direction was the focus of my shots for the actual sun rising. 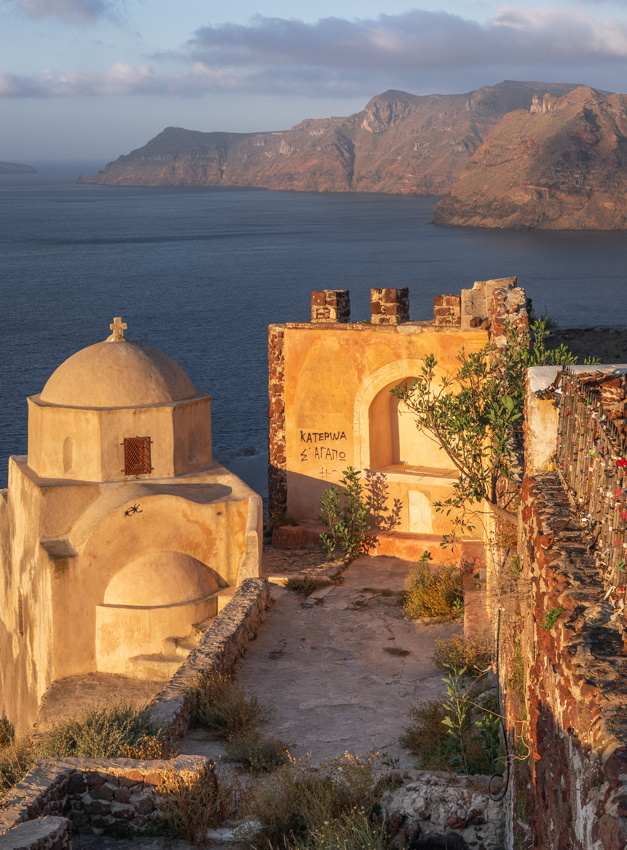 The castle of Agios Nikolaos is carved in a rock.  The castle dates back to the 15th century during pirate raids.  The castle had an excellent viewpoint and was well fortified.  There were also beautiful  residences inside owned by the Venetian rulers at the time.  At the present time, because of the destruction of the 1956 earthquake when great parts of the settlement collapsed into the sea, there is only part of the watchtower left.  Apparently this is a very popular spot for sunsets.  We tended to avoid the area at that time due to the crowds.  This photo was made just as the sun was hitting the castle. 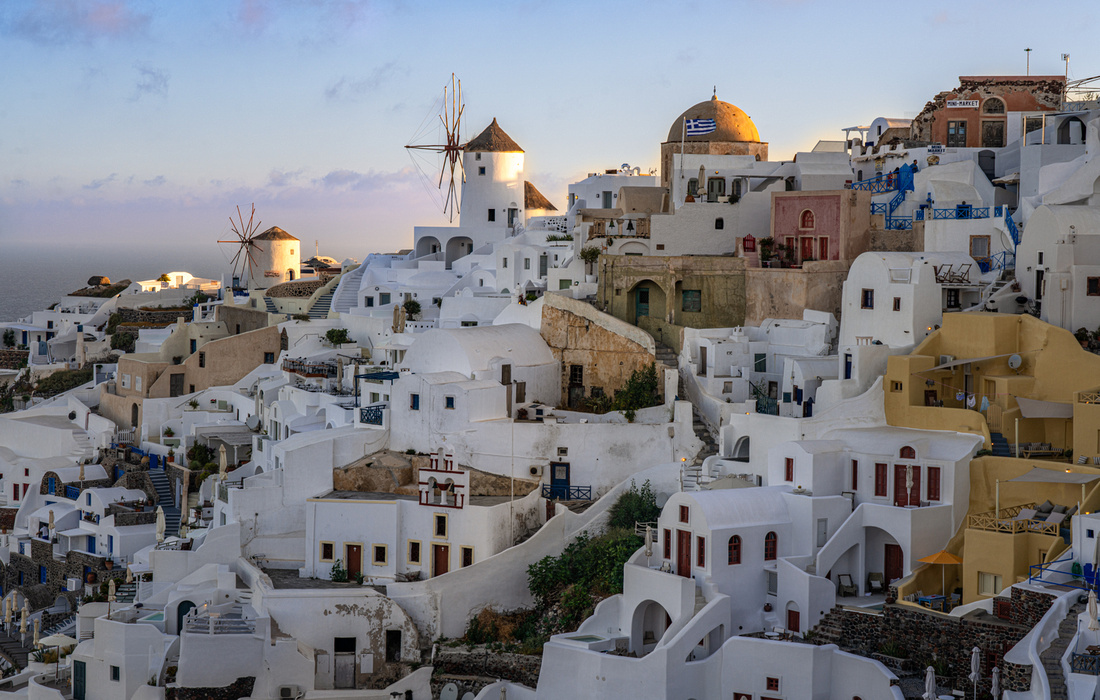 We stayed in this area for most of the early morning light. 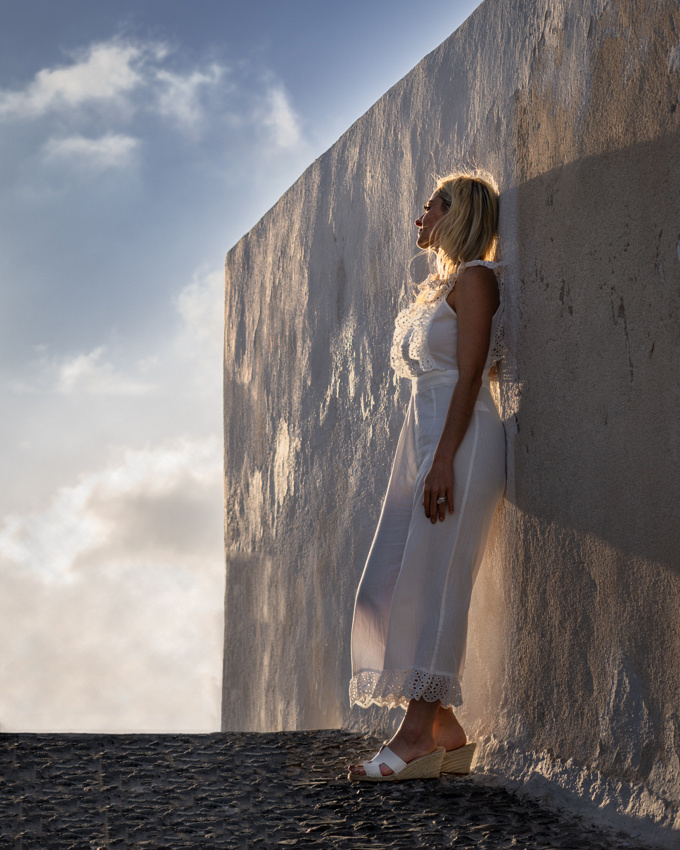 The photographer allowed us to photograph his model. 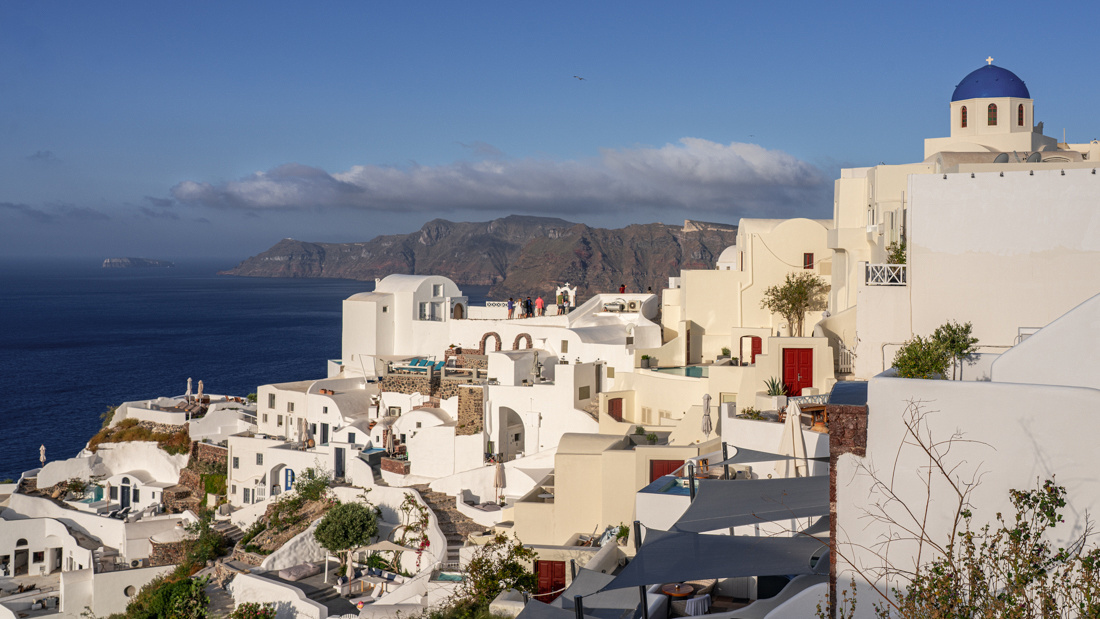 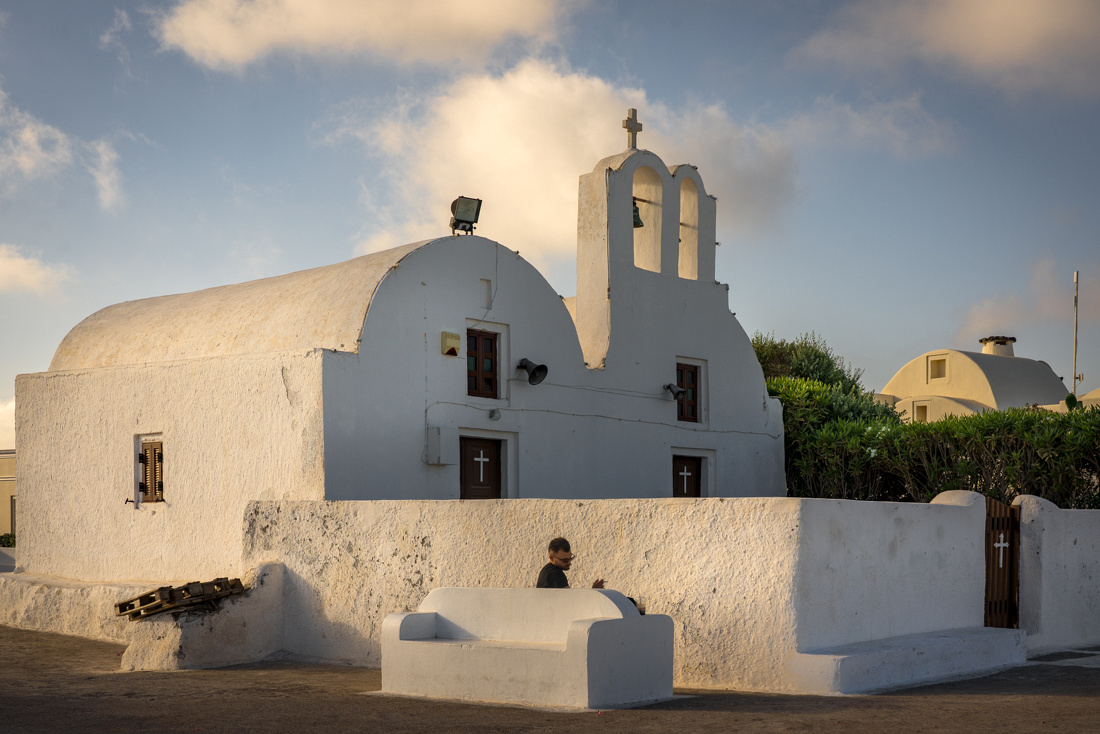 We kept walking in the village of Oia exploring different parts while the light was still good.  This shot was taken around 7.30 am.  We had been out shooting since 5.30 am.  This is the best time to wander in the streets before too many tourists are out. 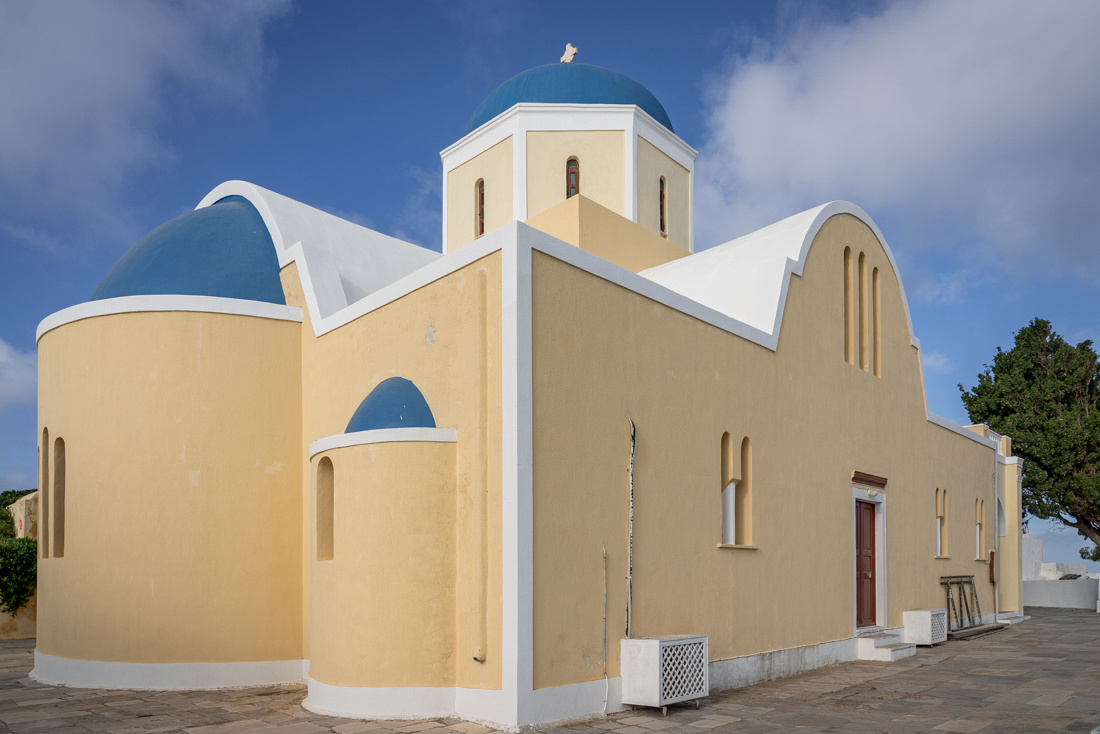 One more beautiful church to photograph in the nice light. 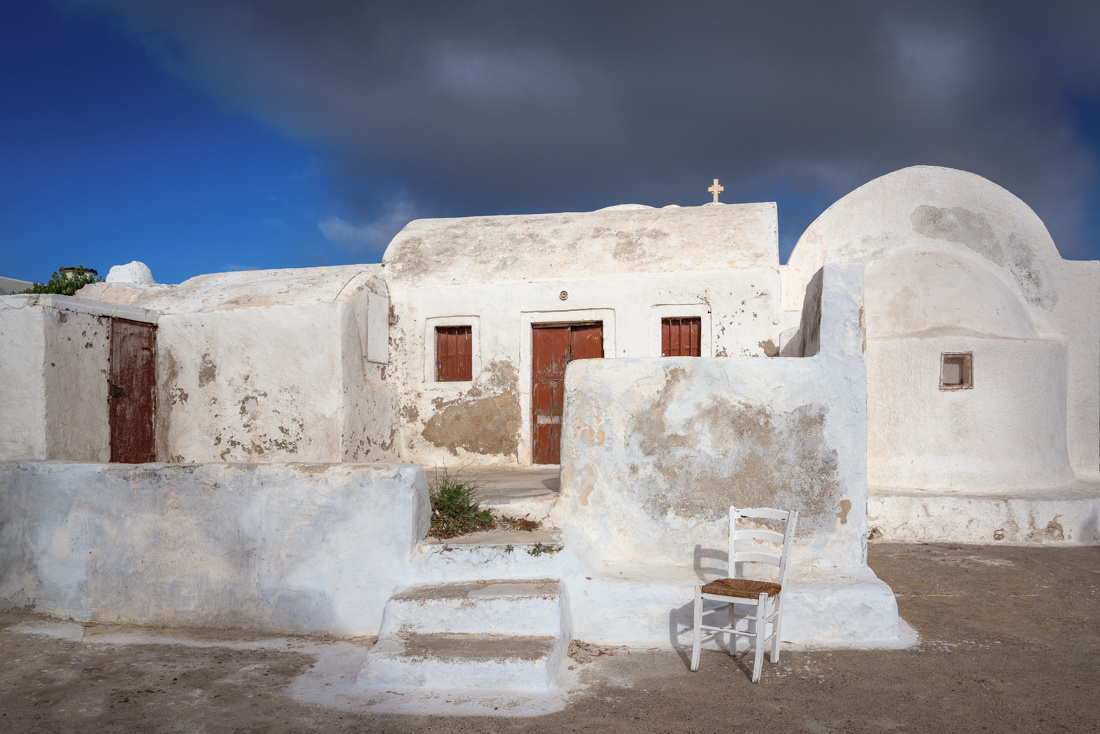 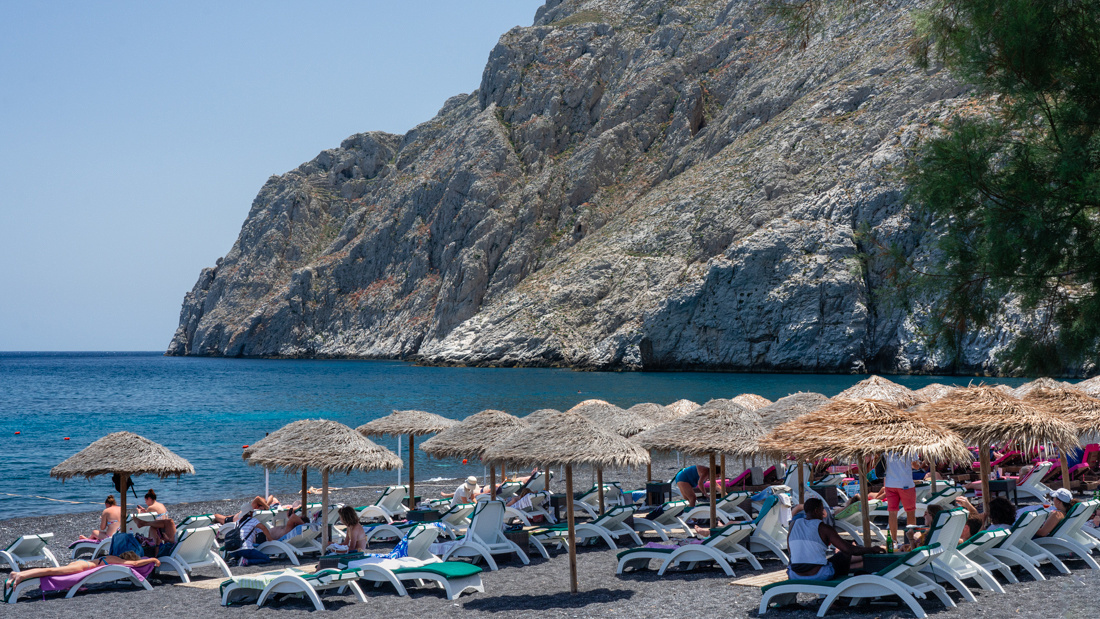 In the late morning we went to the coastal town of Kamari.  The beach was covered with black pebbles.  Once an agricultural and fishing village, today the town has a thriving tourist industry with lots of shops, restaurants, bars and hotels. 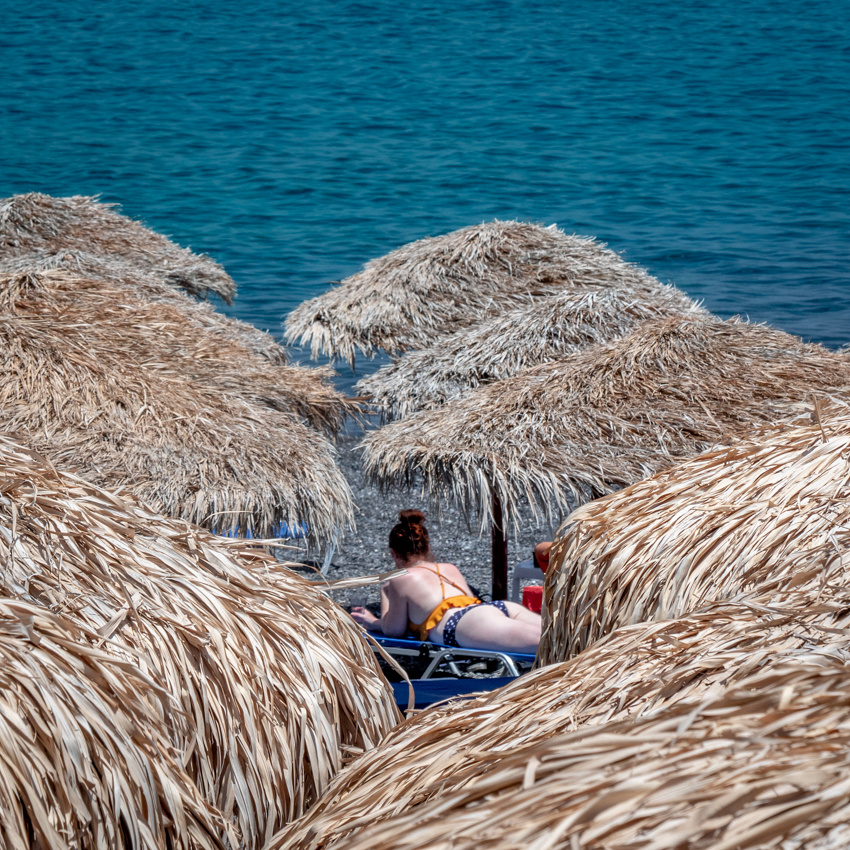 People could rent the lounge chairs along the beach. 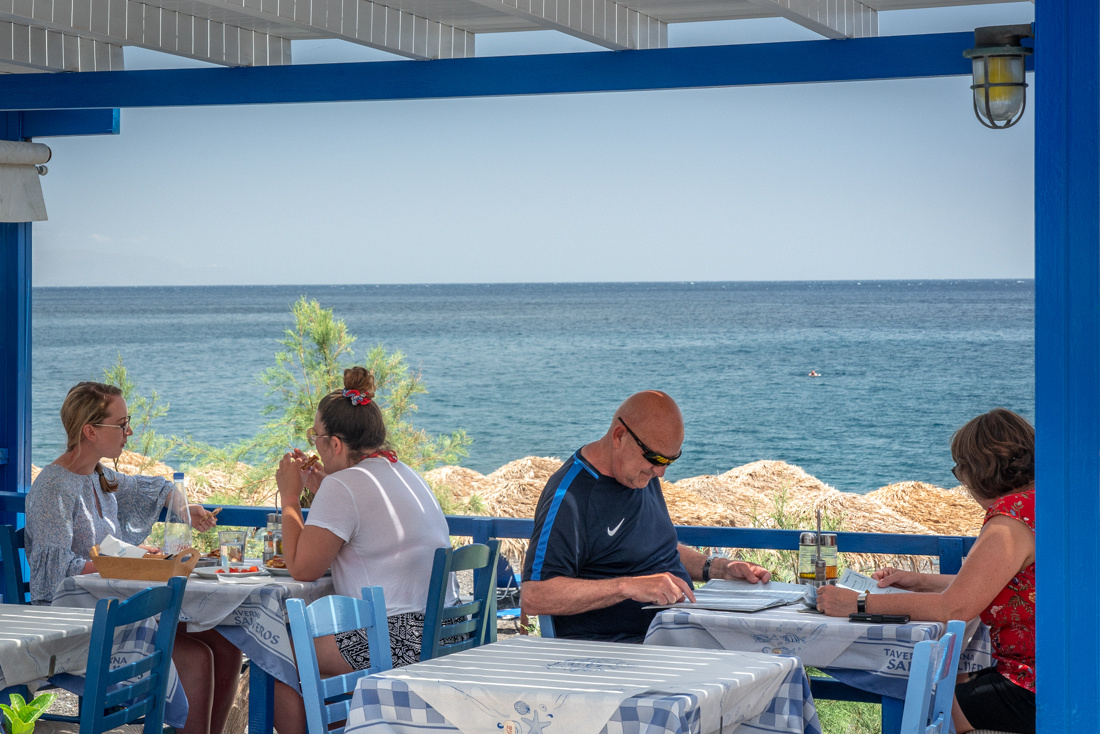 One of the many restaurants beside the beach. 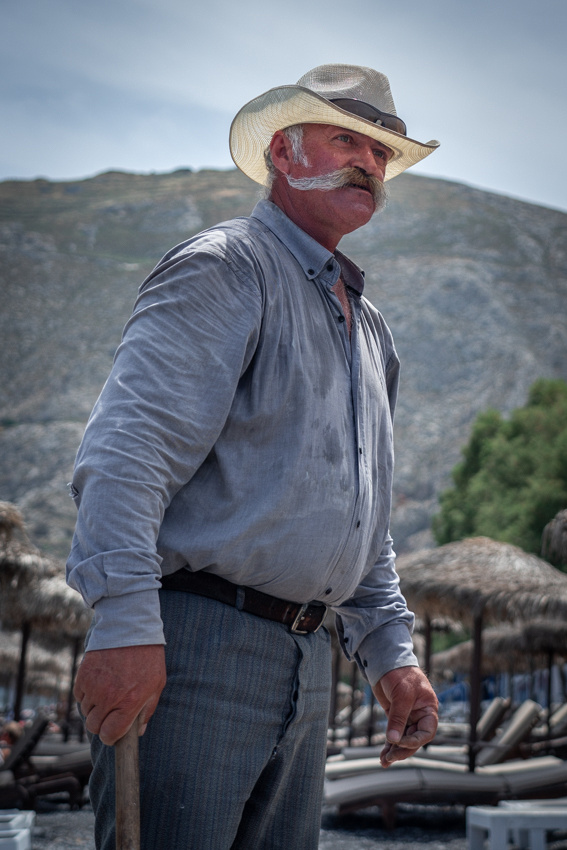 This gentleman was working on the beach and allowed us to take his photograph.

After eating at the beach area, we walked in the town where we saw a priest riding the bells.  We thought it might be a Greek wedding because of a trail of petals on the street but we never saw any evidence of the ceremony so it must have been some other celebration. 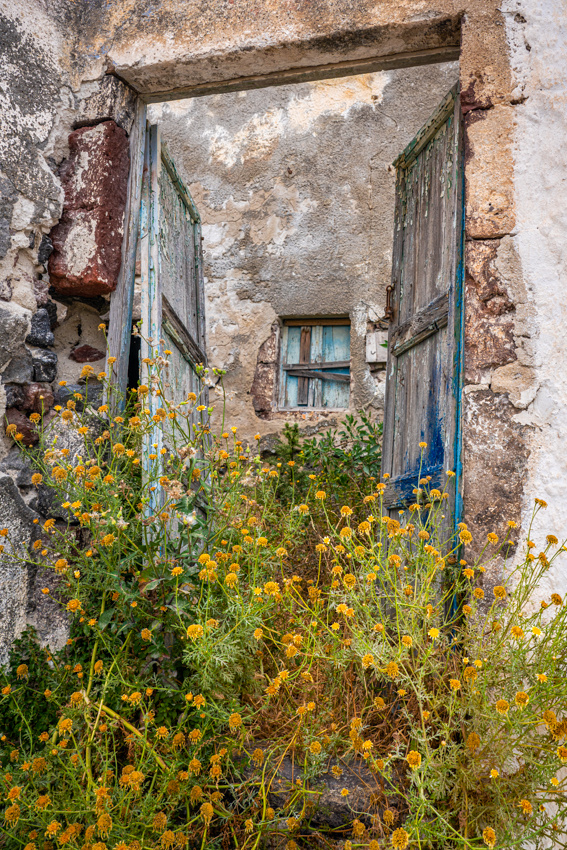 As usual, we explored the area and wandered around the streets.  Like in some of the other villages, we came across buildings that had been damaged by the 1956 earthquake and had not been repaired. 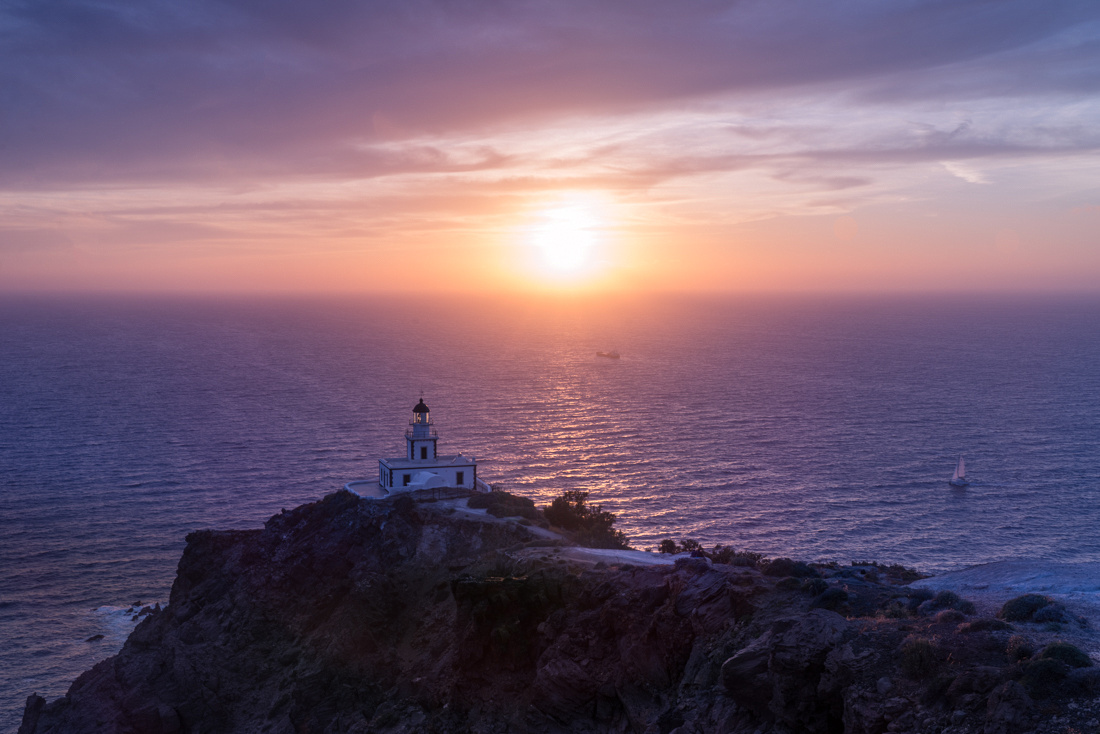 For out last sunset on the island, we travelled to the Akrotiri lighthouse, a 19th century lighthouse built by a French company in 1892. This is one of the oldest lighthouses in Greece and stopped operations during World War II. The lighthouse is famous for its sunset views! 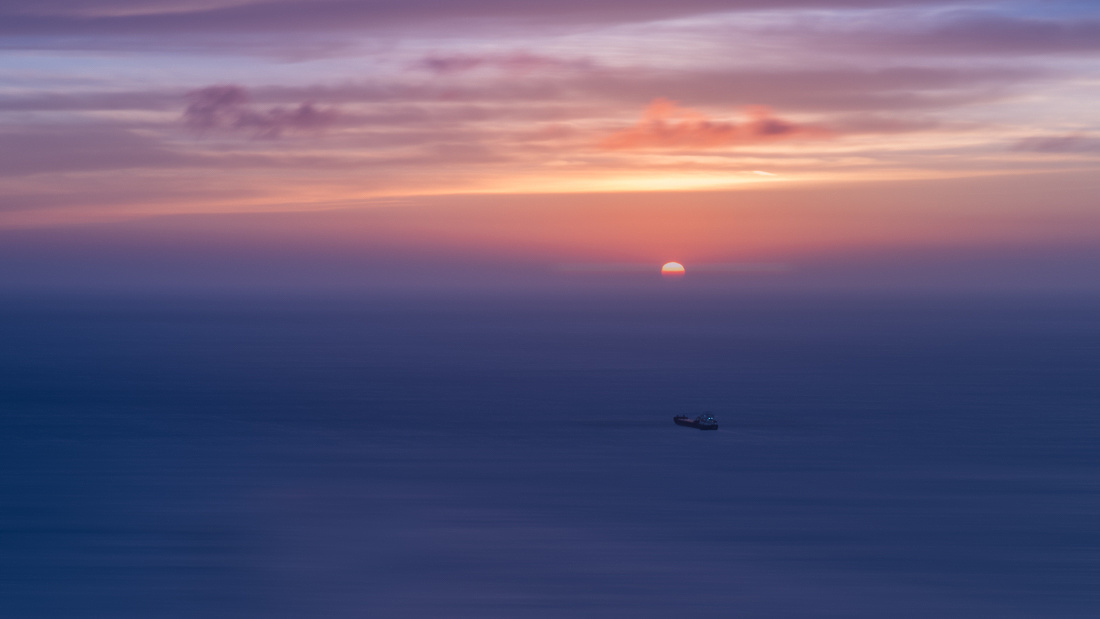 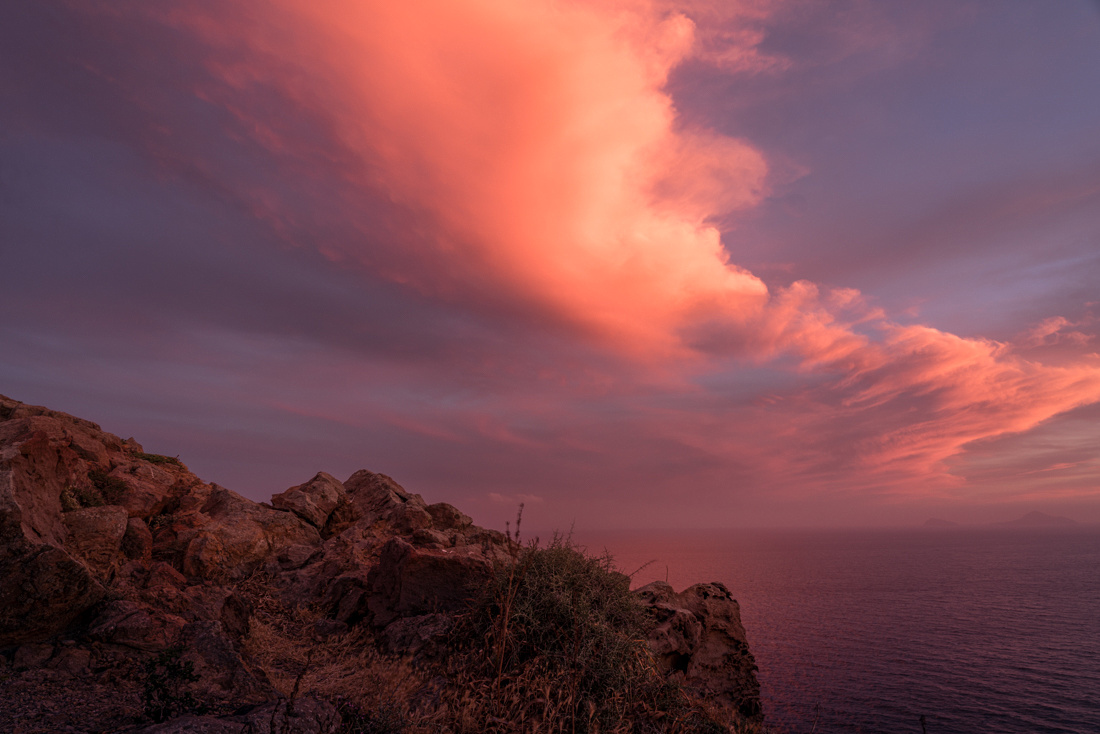 It was an incredible sunset- this shot was taken looking behind me. 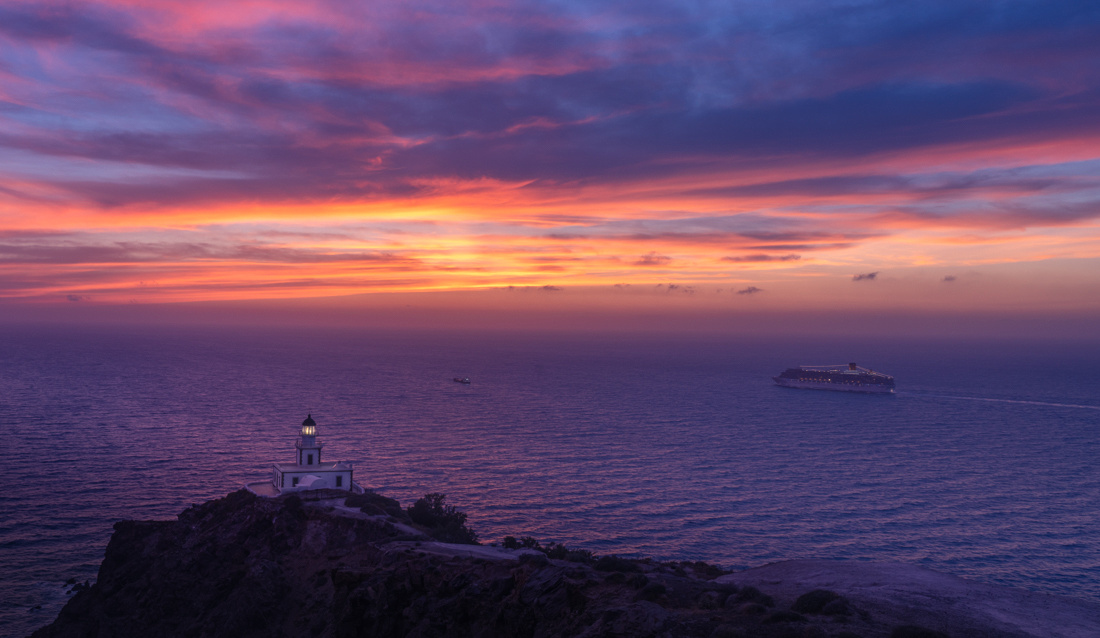 The lighthouse gets its name from the nearby ruins of a Minoan town that was lived in as early as 4,000 BC.  Originally using light that was created from oil, it became powered by electricity in 1983.  You can see the rectangular house attached to the lighthouse where the lighthouse keeper lived. 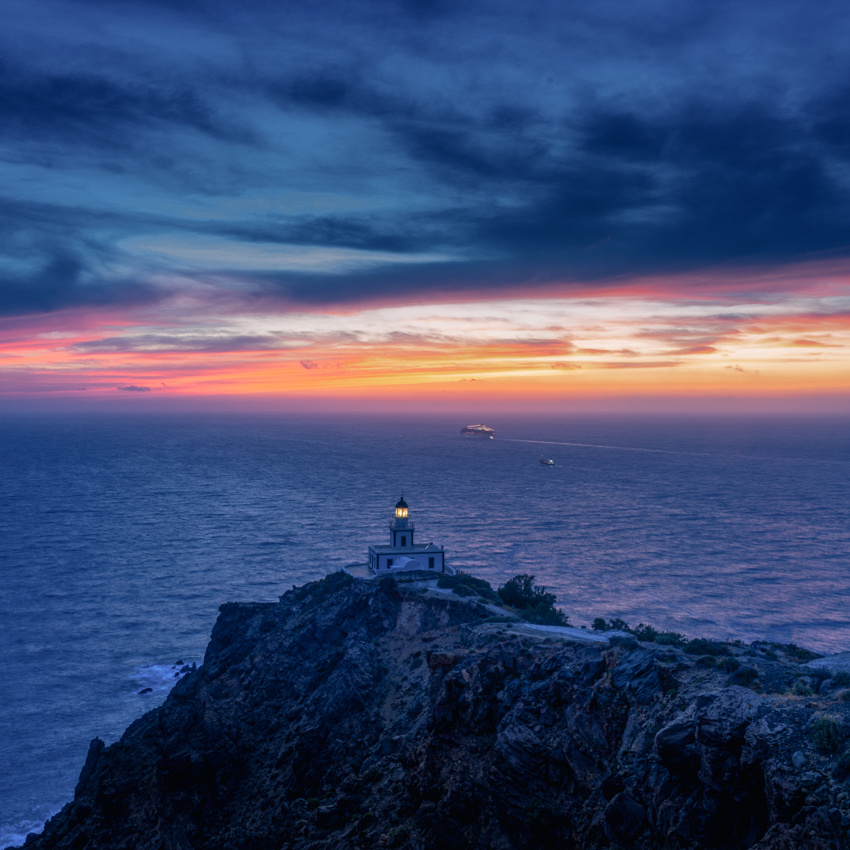 Not a bad way to end our time in Santorini.  The next day we took the ferry to the island of Milos.  Instead of meeting at 5 AM to shoot sunrise,  we slept in, packed and checked out.  We arrived at the ferry terminal in plenty of time.  We had assigned seats on the ferry -there was some mixup as other people seemed to have the same assigned seats.  Eventually, we got it sorted out.  The ferry was absolutely packed and we didn't move from our seats until we disembarked.

Lynn Muller(non-registered)
What a beautiful place Marsha! Your photos did it much justice. Thanks for sharing.
Bruce(non-registered)
Good morning,
Glad to hear that you and Ralph are home safe and sound.
You make it difficult to pick a favorite from each posting but I'm going pick the
light house shots, they are terrific.
Keep well in the midst of everything.

Bruce.
Eizabeth(non-registered)
Hi Marsha, Welcome back to home in Toronto. It is sure different world right now here in Canada isn't it! We flew home just over two weeks ago from Florida...earlier than planned. Trips for late March and late April /May to Spain cancelled of course. Your Santorini photographs are stunning. You certainly have a talent for capturing the beautiful light of both sunrise and sunset in Santorini is one of the most special places in the world. The light on the stark white buildings of Santorini is so gorgeous...and you captured it beautifully in all your photographs. Thanks for sharing and stay well!
Best,
Liz
Jane Jamison(non-registered)
Nice images, Marsha! As I reflect on these, I'm amazed that we always seemed to be at the right spots at the right times. We certainly saw some gorgeous sunrises and sunsets on Santorini!
No comments posted.
Loading...
Subscribe
RSS
Recent Posts
Fox Glacier Haast Wanaka Queenstown and Glenorchy Moeraki Boulders and Milford Sound Penguins, Seals and Sheep Southern Alps, New Zealand Last evening in Chania Chania and Selton Litania Beach Chania and Balos Beach
Keywords
Croatia Crete Morocco Cuba New Zealand South Island alberta National Park galapagos
Archive
January February March April May June July August September October November December
© Marsha Fouks