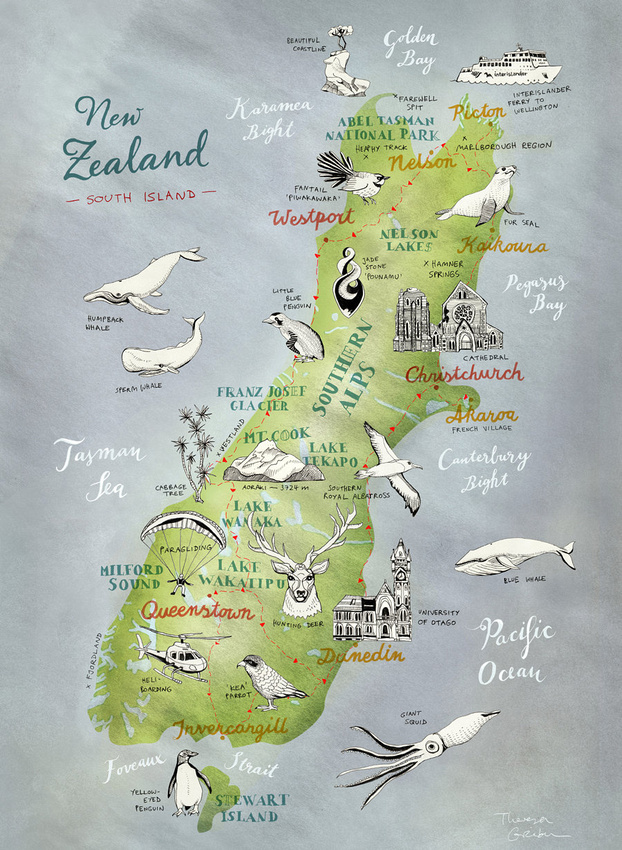 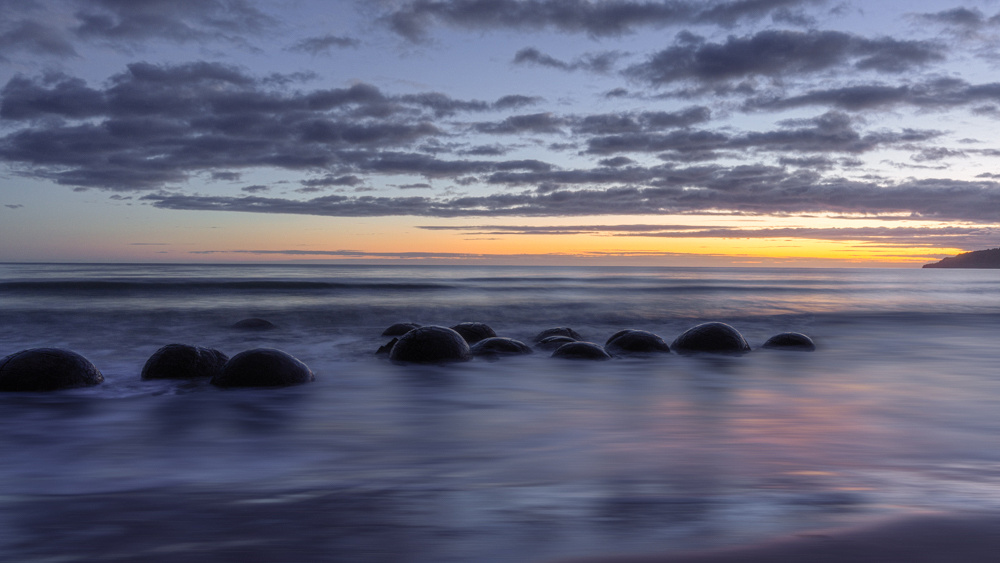 This morning we met at 5.00 AM to go and shoot the Moeraki Boulders.  These boulders are unusually large and spherical boulders lying along a stretch of Koehohe Beach on the Otago coast of New Zealand between Moeraki and Hampden.  Some of the boulders were in a cluster and some were isolated. 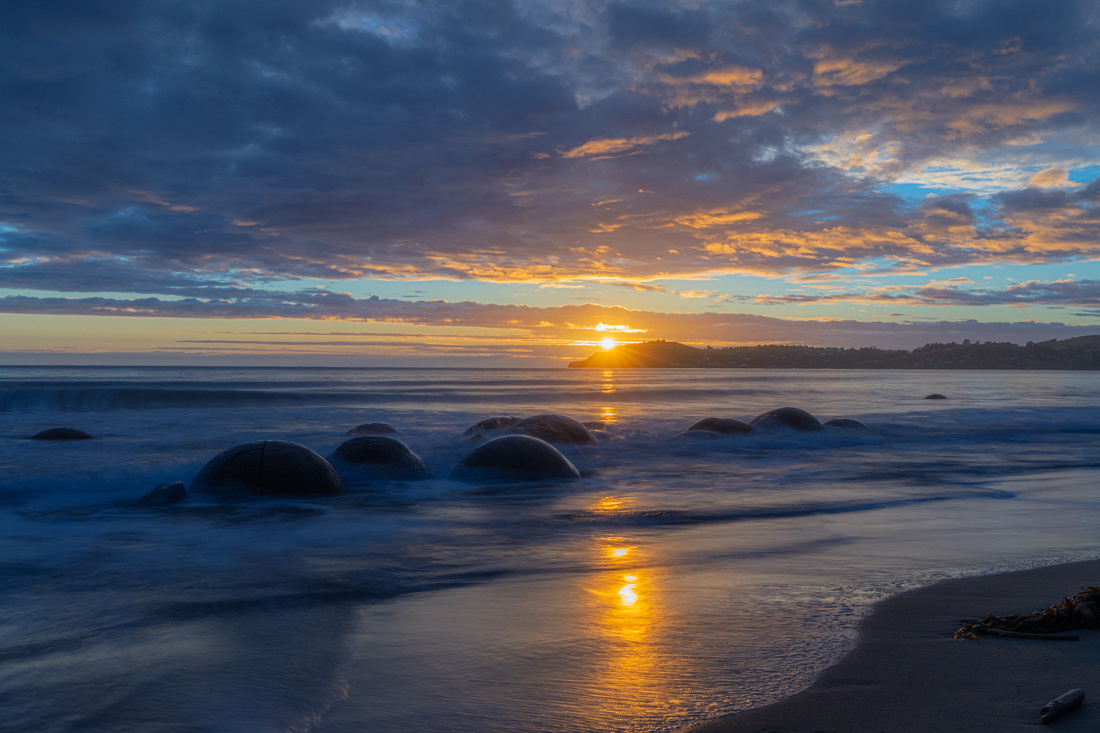 At one point, I was not quick enough to get out of the way and my shoes got soaked. 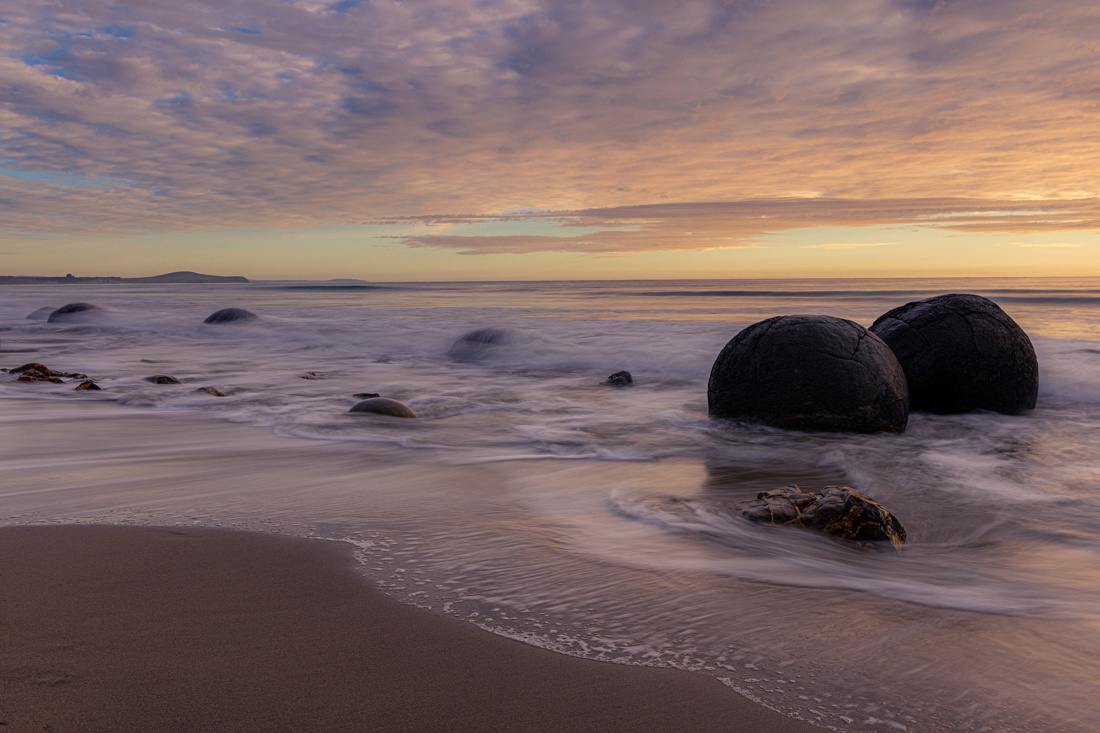 After this shoot we went back to the hotel to clean our gear, pack up and make our way to Te Anau where we would arrive  later  in the afternoon.  One way to clean the tripods and get rid of the salt on them was to take them into the showers and rinse them really well with hot water. 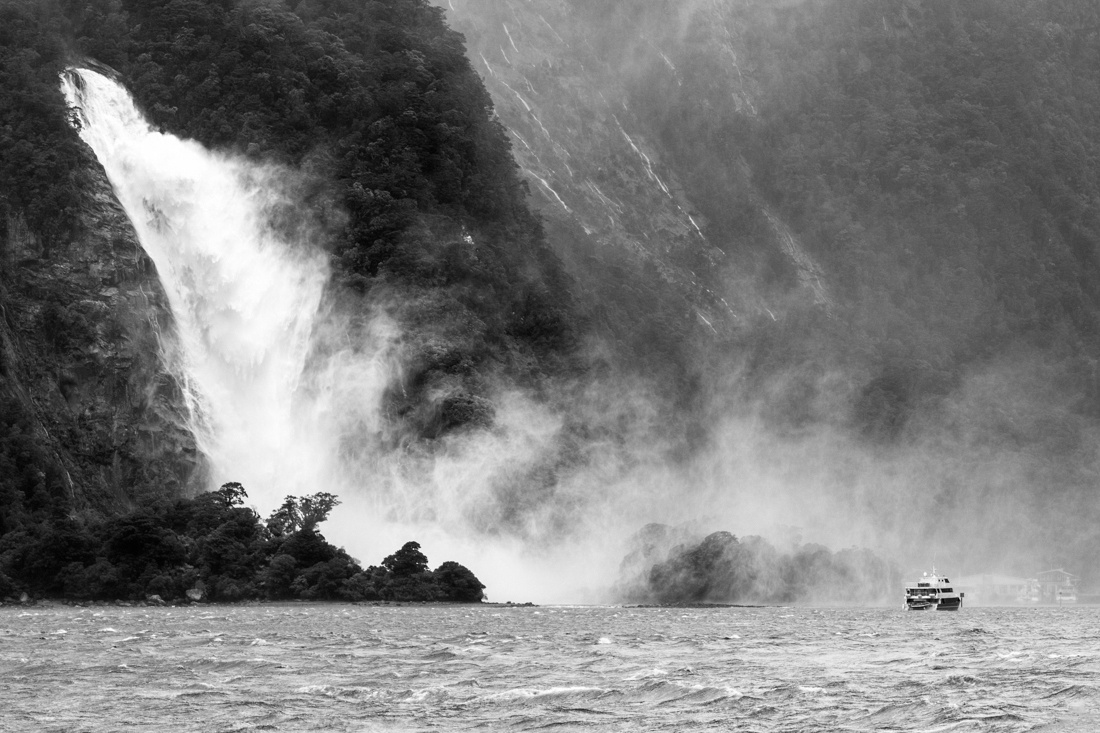 Since we hadn't been getting up early enough,  today we met at 3.30 AM for a sunrise shoot at Milford Sound.  I think a lot of us dozed off in the van.  It was raining when we left the hotel - we did have a two hour drive ahead of us which was the reason for such an early start.  So we were all hoping that the rain would stop but that didn't happen right away.  When we arrived, I went outside briefly and came right back in the van.    Most of the group did go outside and shoot.  I did not want to take a chance on damaging my gear in the pouring rain or getting sick.    Eventually everyone got back in the van (and were pretty wet) and we went to eat breakfast.  Milford Sound is a fiord in the south west of the island within Fiordland National Park.  This above shot was taken once we were on the boat when it was still very windy with rough waters but the rain had pretty much stopped. 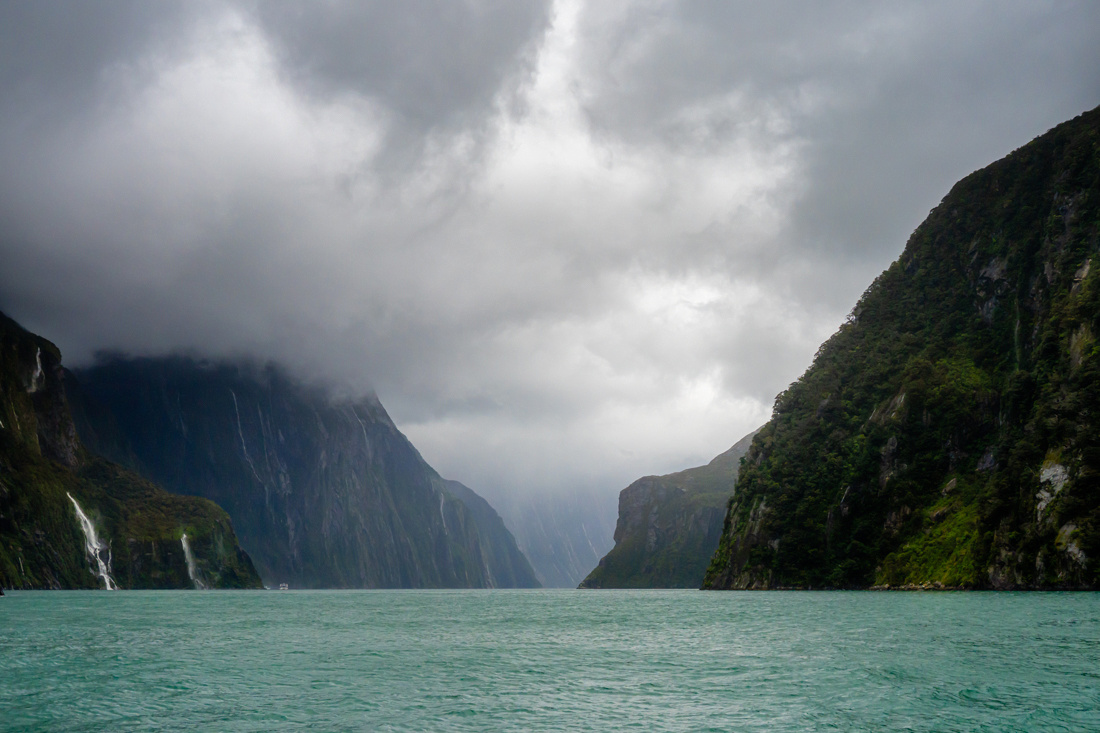 We took a boat tour of Milford Sound (which had indoor as well as outdoor seating).  Fortunately, the rain had pretty much stopped so we could go outside and photograph.  Because of all of the rain, we saw lots of fast moving waterfalls.  Milford Sound was described by Rudyard Kipling as the "eighth wonder of the world".  The area was carved by glaciers during the ice ages. 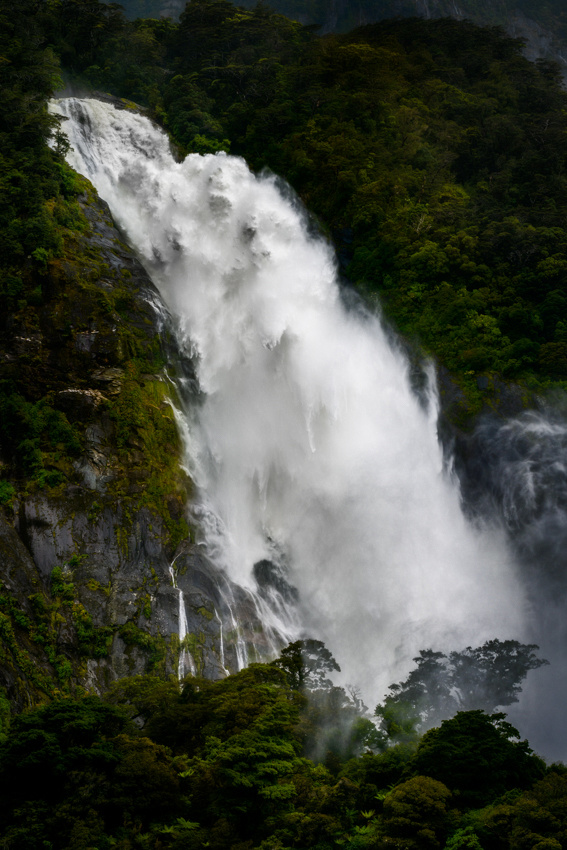 Milford Sound has a mean annual rainfall of 6,412 mm (252 inches) each year and is known as the wettest inhabited place in New Zealand and one of the wettest in the world.    Our whole group loved the boat ride which was just breathtaking with the fiord's cliffs rising vertically from the dark waters.  The waterfalls cascaded downwards from as high as 1,000 metres.  The rainfall creates dozens of temporary waterfalls, as well as a number of major, more permanent ones.  I believe we were told it rains here around 300 days a year.

Milford Sound has been acclaimed as new Zealand's most famous tourist destination. 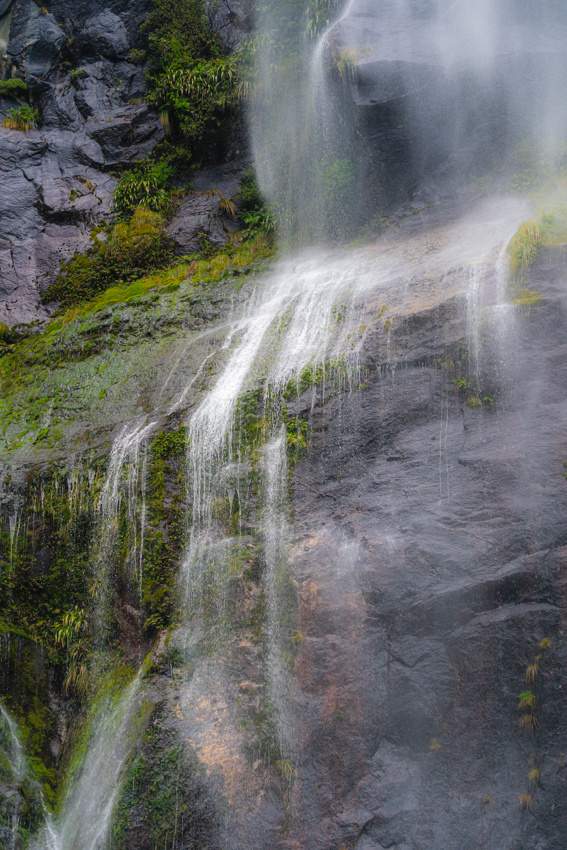 After lunch we headed back to Te Anau to dry out.  It started to rain again after lunch. 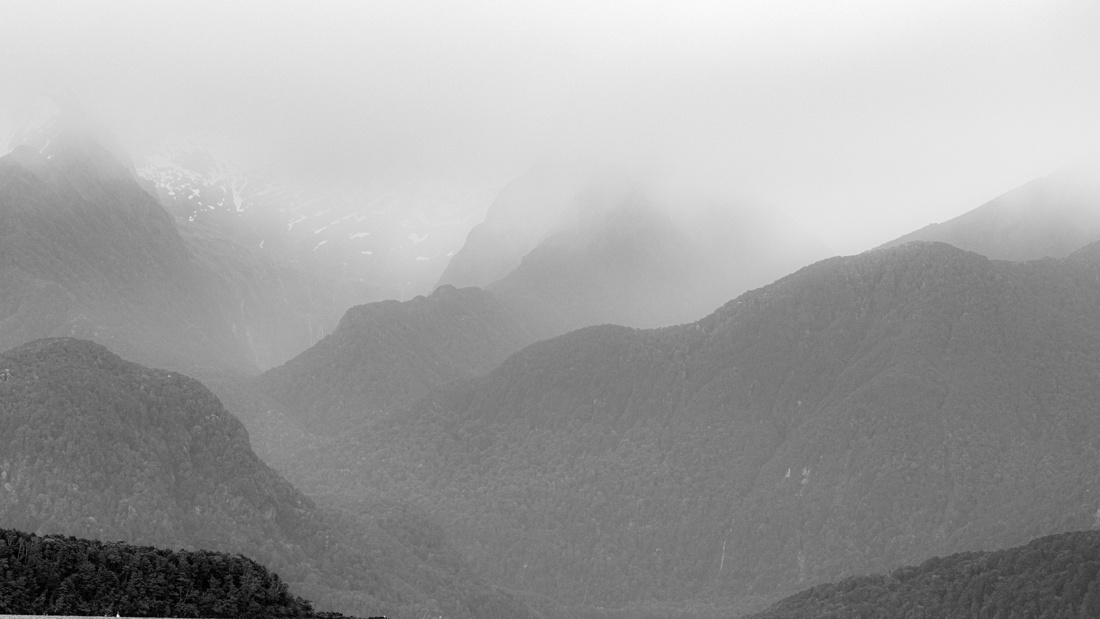 In the evening we went on a nearby shoot.  Because of all of the clouds the photographs were all about layers of the mountains. Last shot of the day before returning to the hotel.