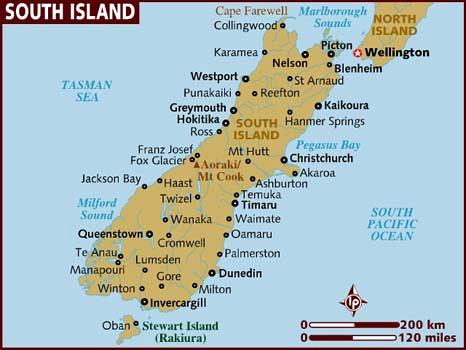 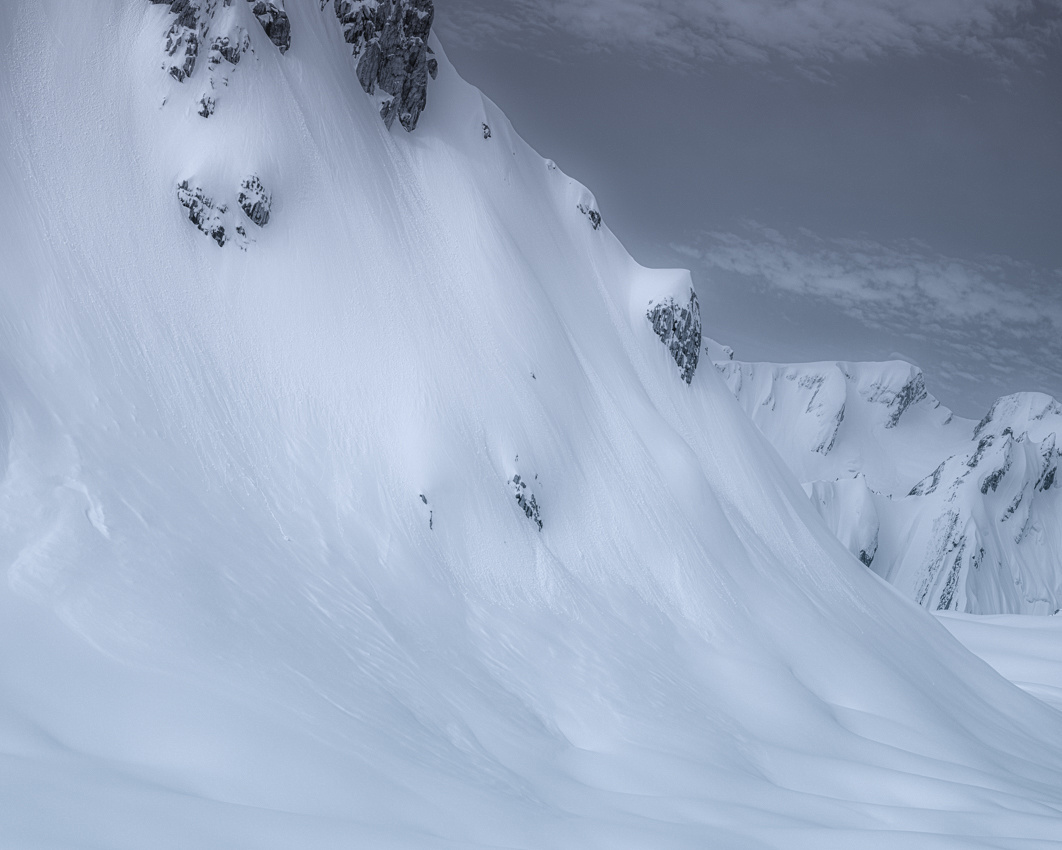 This blog is a continuation of the previous one.    Our group went on  helicopters (open door) flying over Fox Glacier.  This Glacier is one of the most accessible glaciers in the world.  You can walk from Fox Glacier Village to its face.  Given its easy access, it is a major tourist attraction and gets about 1,000 tourists a day during peak season. 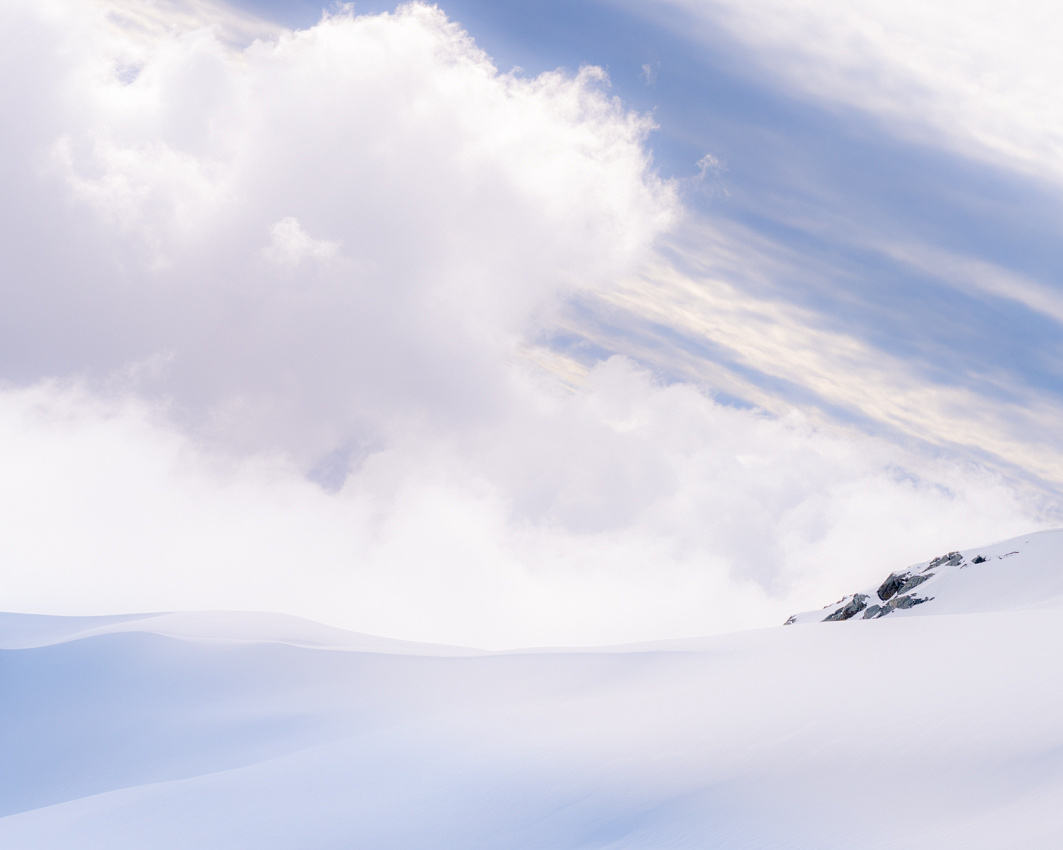 Philip had the pilot fly over different areas each time getting fairly close to the ground  before going up again. So there were lots of dips! 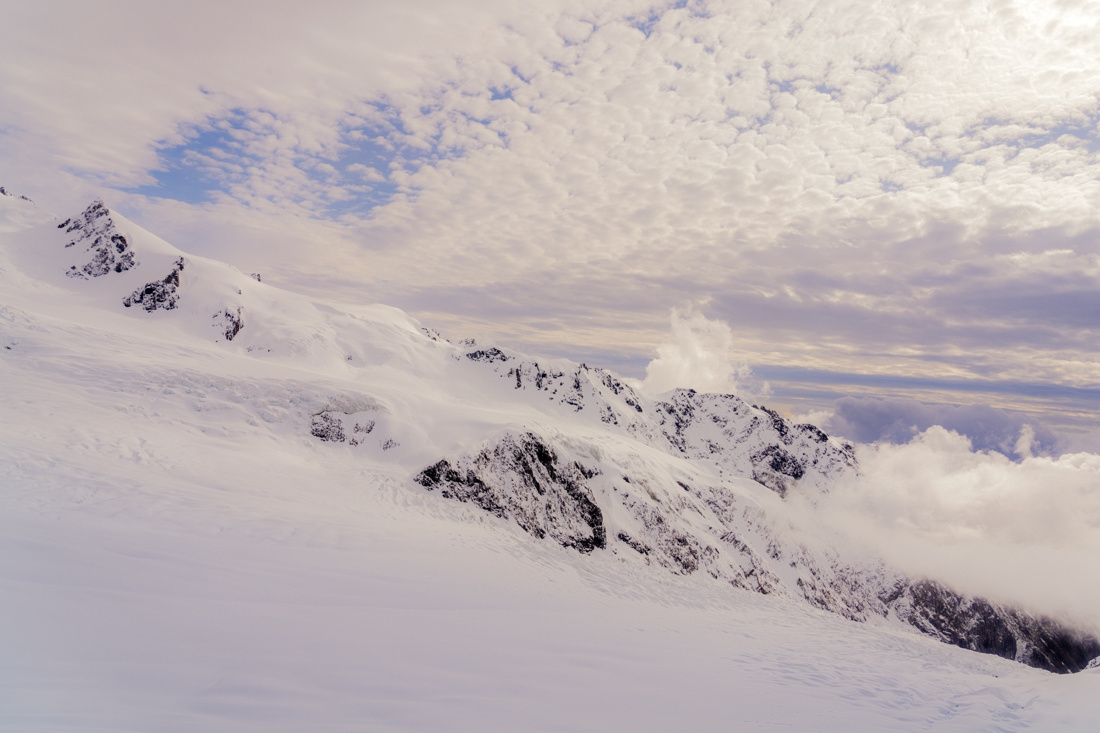 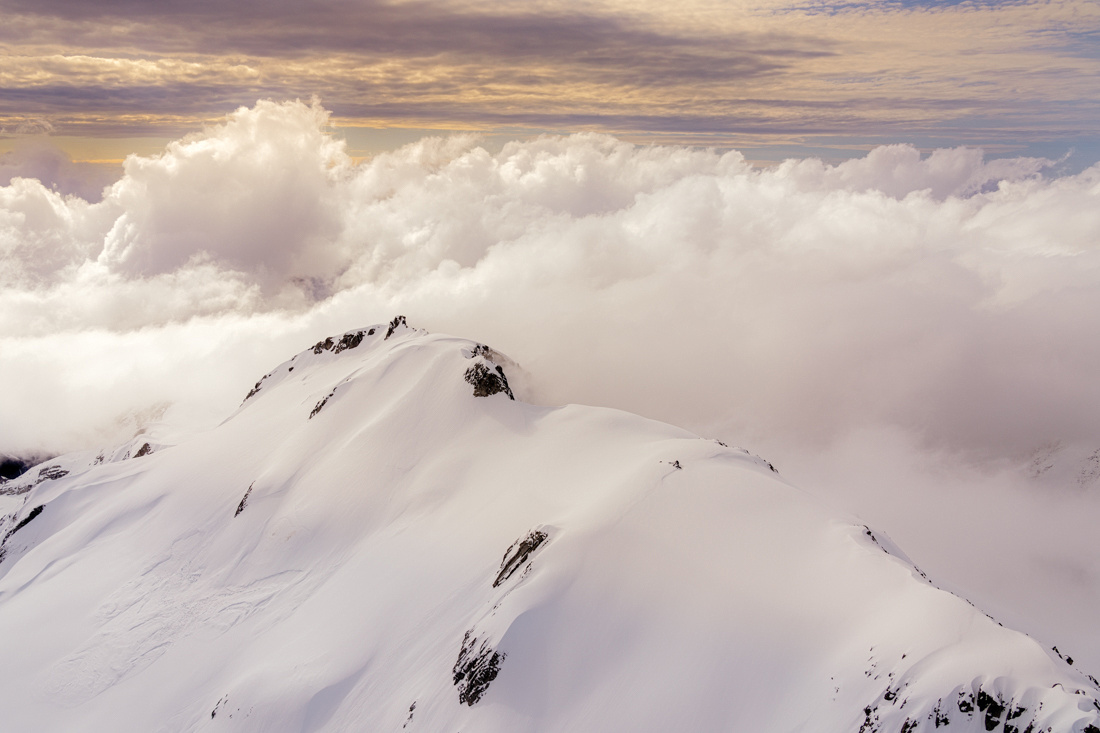 We started to get some colours as the sun was setting. 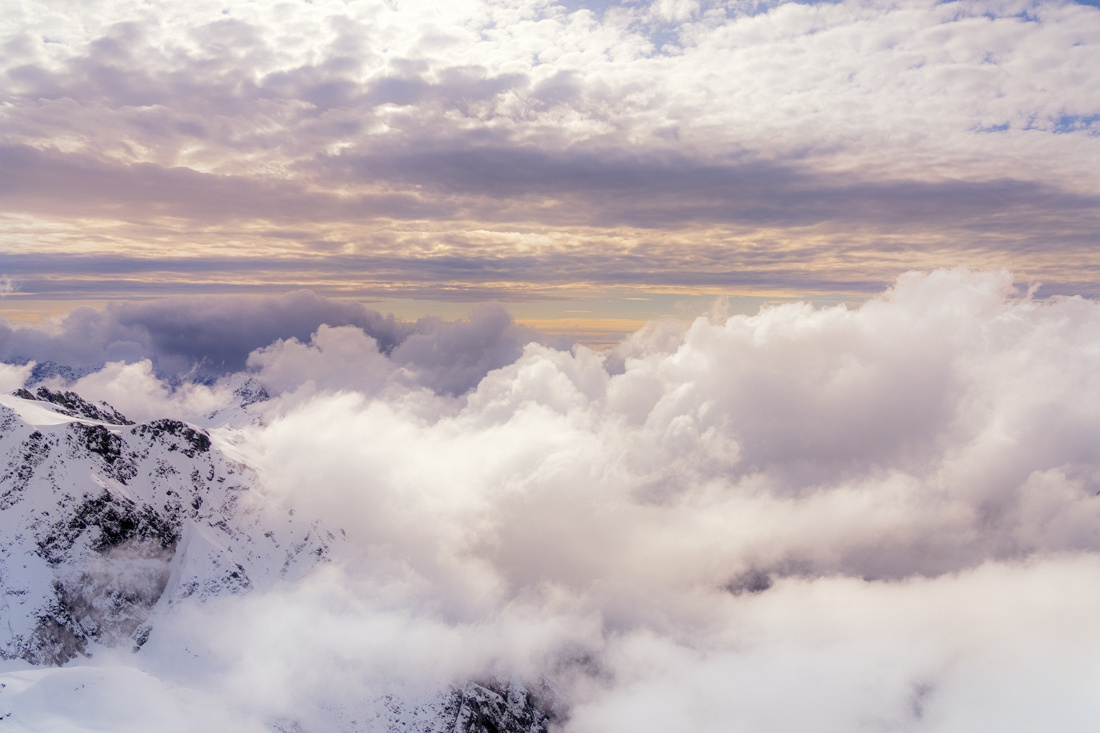 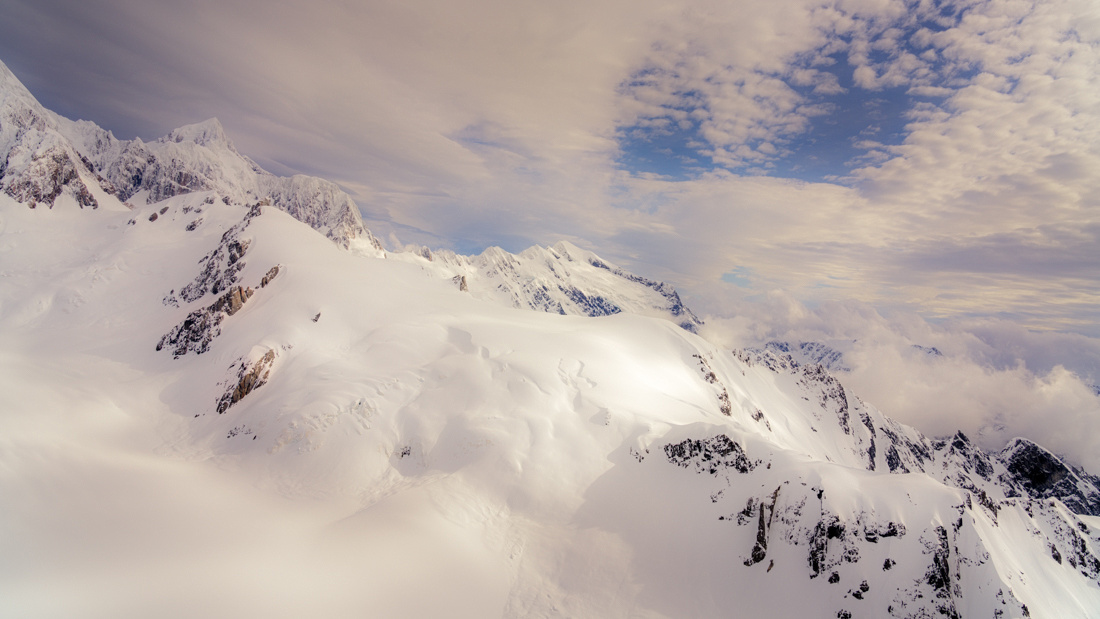 Though people are told not to, some go beyond the barriers and climb  onto the glacier  (without guides) whose rapid advance helps to create dangers of sudden ice and rockfalls.  I did not see anyone climbing or on the glacier during our thirty minute flight.   Two Australian tourists were killed on January 8th, 2009 when more than 100 tonnes of ice fell on them.  They were not part of a guided group and had crossed safety barriers and walked approximately 500 metres to the terminal face to take photos. 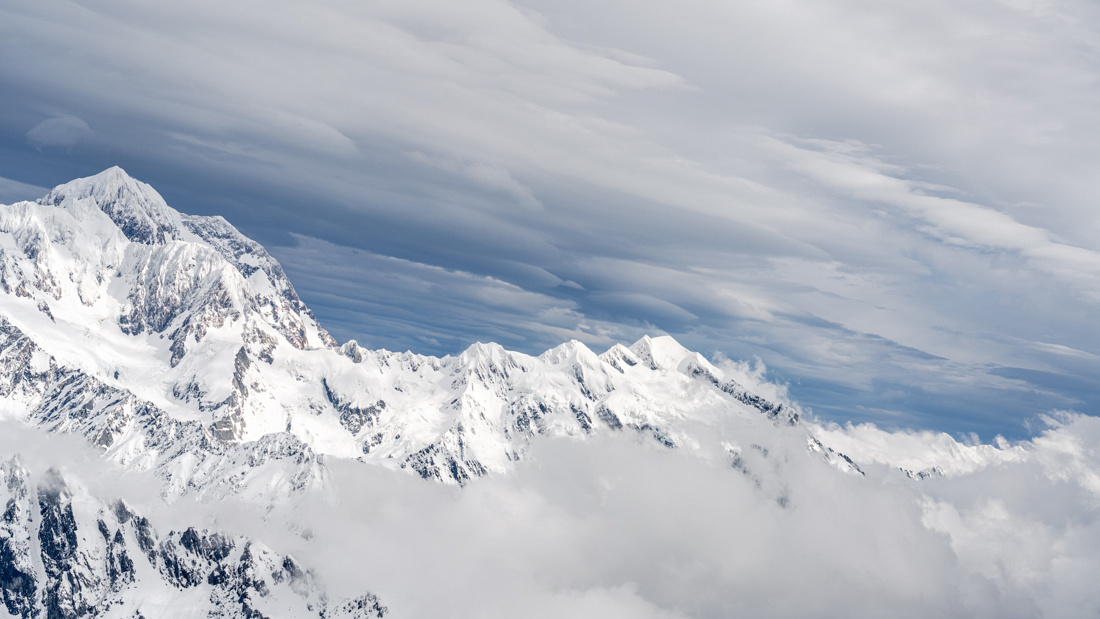 On November 21, 2015, seven people were killed when a helicopter on a scenic flight crashed on the glacier.  The helicopter was operated by Alpine Adventures. We went with Mountain Helicopters -Philip did say that it was the only company that he would use.  I'm just as happy to have not had this information before I went up but I still would have gone. 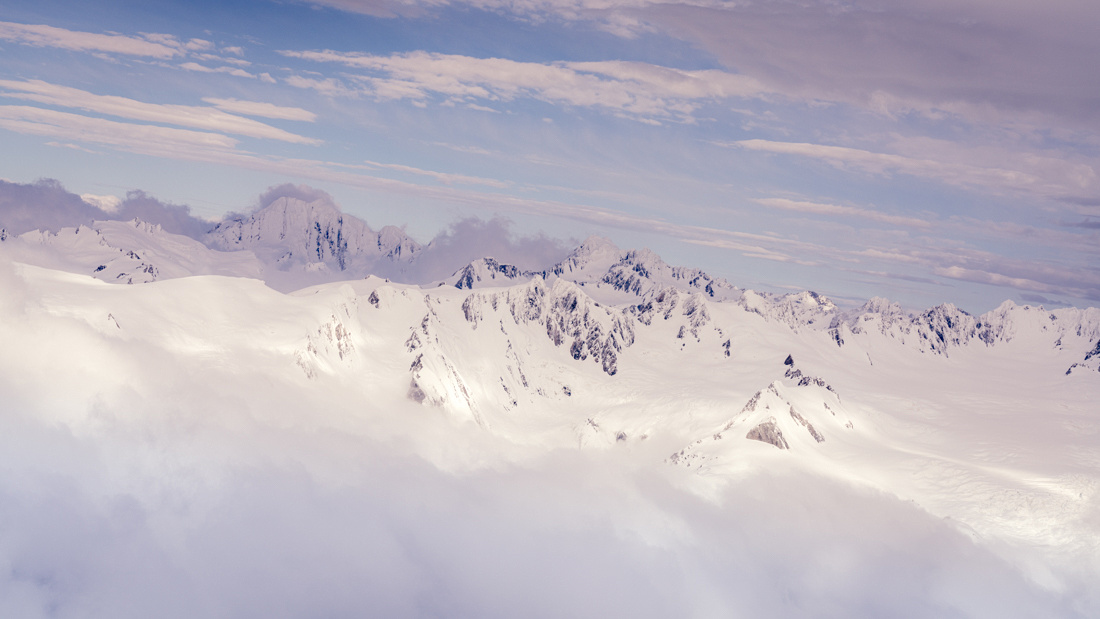 We were lucky because the weather was good on our trip- the next day, we could not have gone on our particular excursion given the bad weather (wind and fog).  We actually stayed in the town of Fox Glacier two days just in case the weather did act up.  We ended up going on our flights the first afternoon we were in town.  Philip was in touch with the operator to see when the best time to fly was.  Shortly after we left New Zealand, this area was flooded and there would have been no flights. 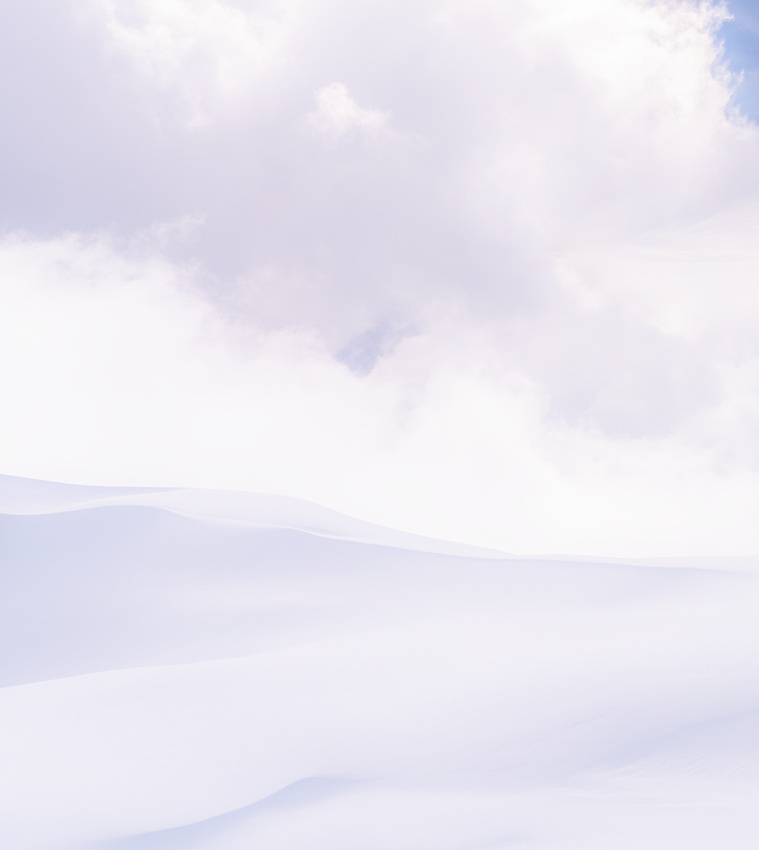 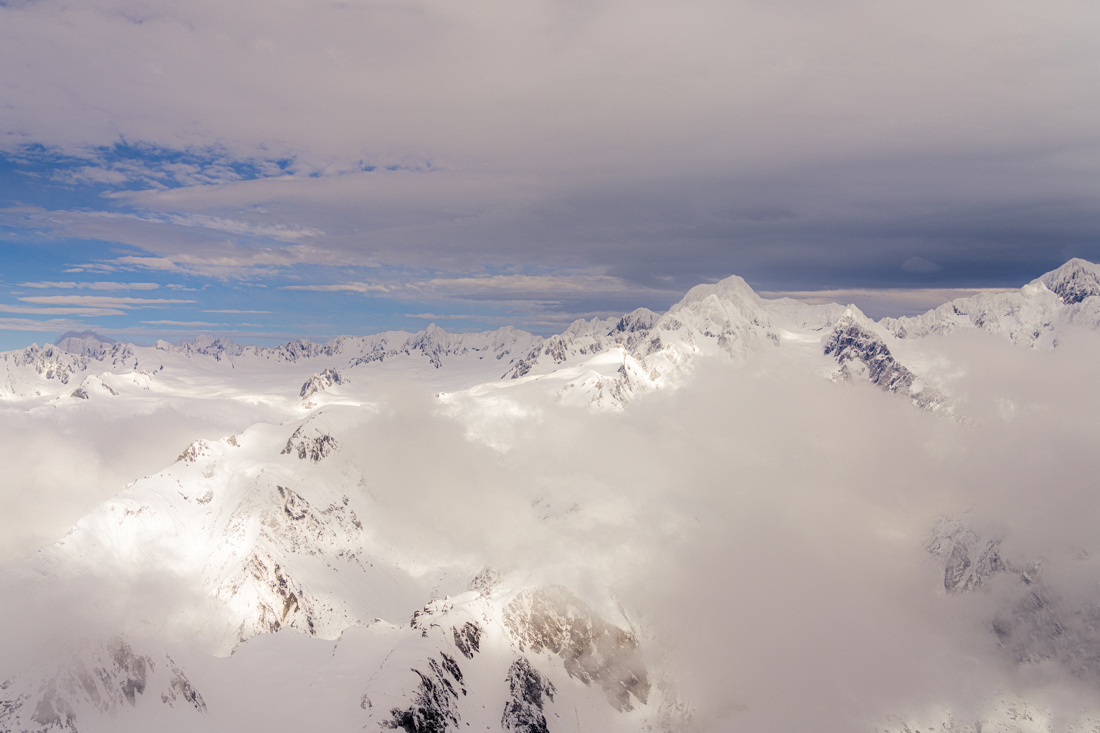 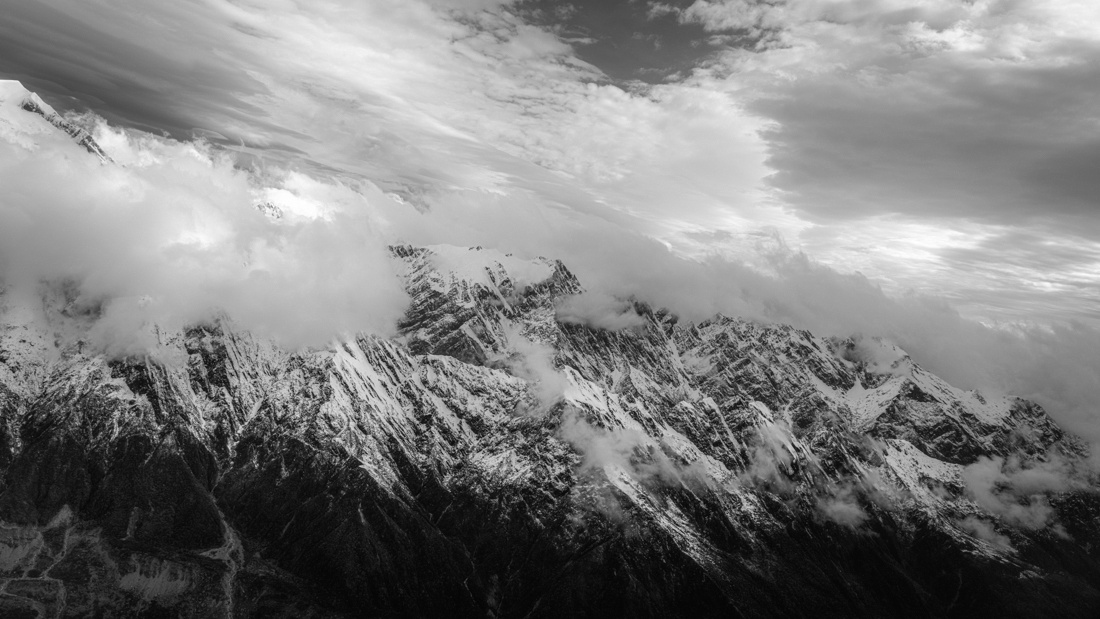 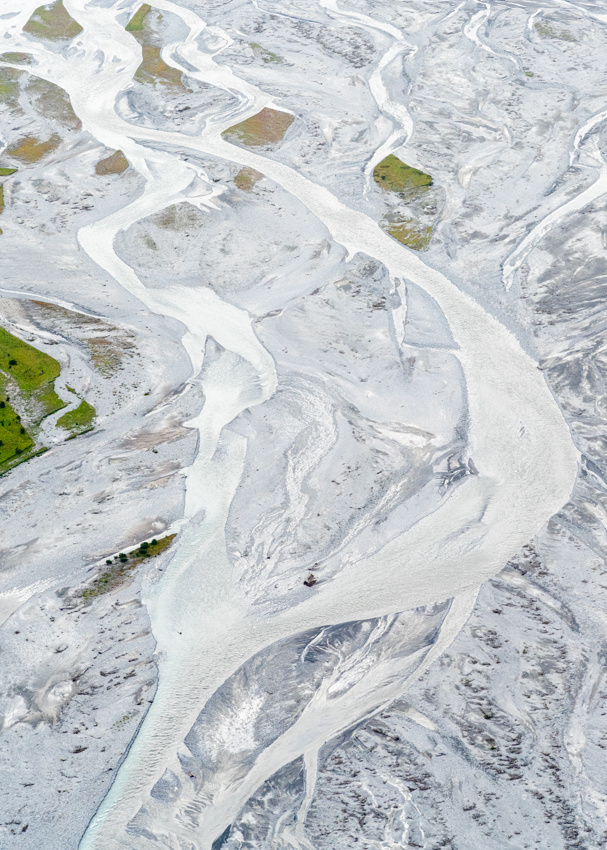 As we made our way back, we flew fairly close over the Fox River which made for some interesting patterns. 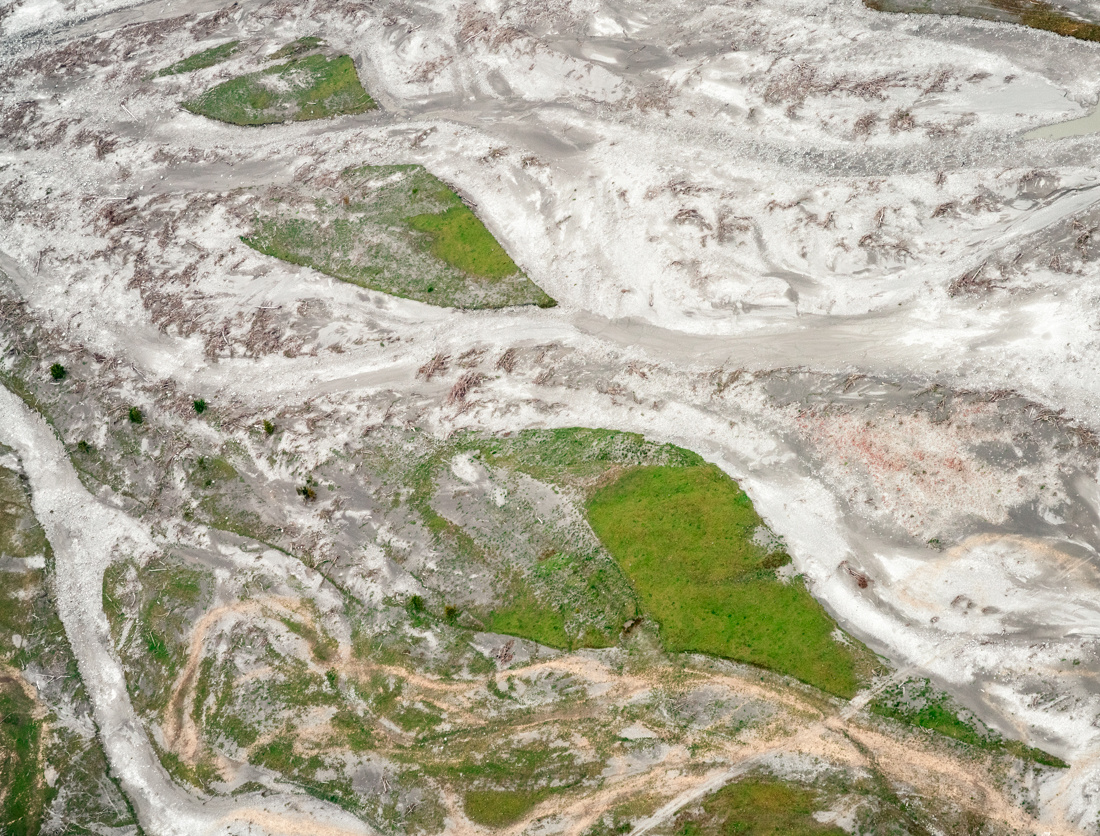 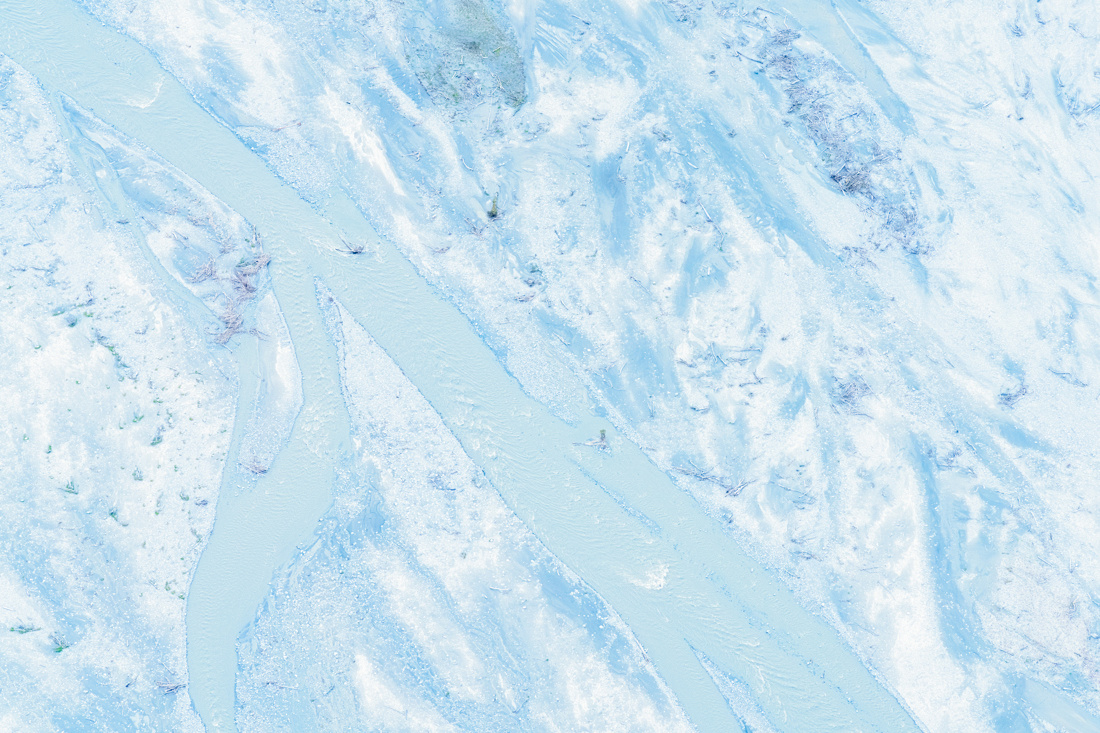 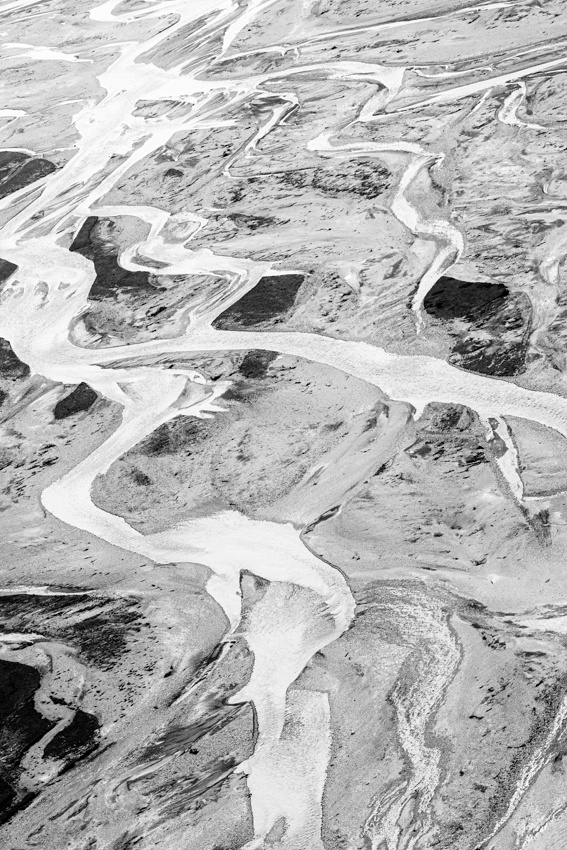 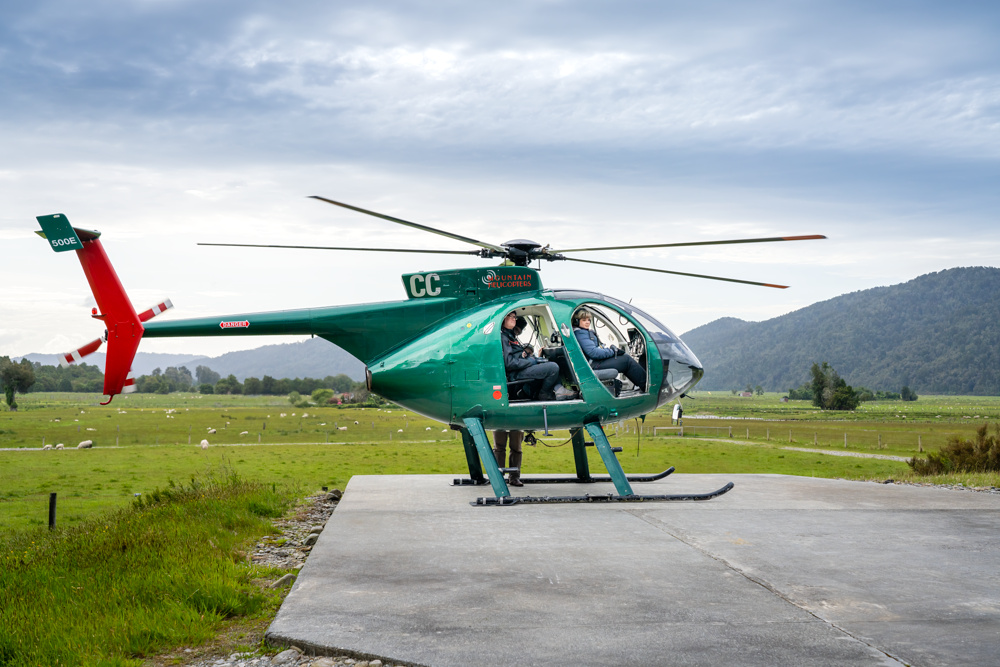 After we landed, we watched the next pair of photographers take off.  This was our helicopter.  The landing pad was in the middle of a field of sheep.

James(non-registered)
Marsha, I particularly liked the sunset colours and the patterns. Thanks for posting again.
Gretchen Taylor(non-registered)
Marsha...simply b3eautiful photos. Icy blue-white is absolutely stunning.
Your photos have inspired me to add Fox Glacier, New Zealand, on my must-see list.
Excellent work, Marsha.
Jane Jamison(non-registered)
Interesting. I loved the abstract river patterns--maybe even more than the glacier photos. Both were really good--unique.
Sandy Dunstone(non-registered)
As are all your photos, these are outstanding, showing places most of us probably won't see in person. Really glad to know that you are still out there doing great adventures and sharing them with us. Thank you.
Maureen(non-registered)
Great to have your blogs back. Love this group of photos taken from the helicopter. I just cannot pick a favourite. All exceptional!
No comments posted.
Loading...
Subscribe
RSS
Recent Posts
Melbourne Last blog of New Zealand Fox Glacier Haast Wanaka Queenstown and Glenorchy Moeraki Boulders and Milford Sound Penguins, Seals and Sheep Southern Alps, New Zealand Last evening in Chania
Keywords
Croatia Crete Morocco New Zealand South Island Cuba alberta National Park galapagos
Archive
January February March April May June July August September October November December
© Marsha Fouks