In May 2016, Ralph and I joined the Linblad Expeditions for an excursion to the Galapagos Islands aboard the National Geographic Endeavor.  The plan was to fly from Toronto to Miami, Florida and then on to Guayaquil, Ecuador.  Unfortunately, the plane from Toronto had mechanical issues.  Hours later, American postponed the flight  and we ended up barely making the trip since it was next to impossible to get to Guayaquil on time.  Part of the problem was that American Airlines didn't actually cancel the flight, they just postponed it until the next day.  So we were forced to wait in the waiting room with the luggage still on board the plane.    There was so much confusion and mis-information at the gate that the security guards were called to calm everyone down.  However, we managed to get on a flight to New York City and take an overnight flight to Guayaquil.  I have to say that Lindblad were extremely efficient and had someone meet us early in the morning and bring us to the hotel.   The map above shows our voyage. 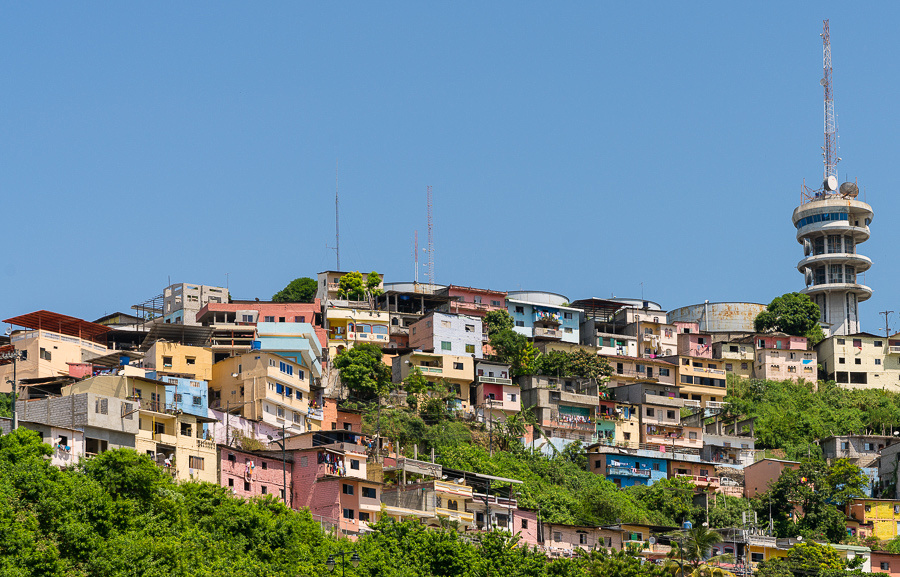 It turned out that our flight to the Galapagos Islands with Linblad  was delayed until early afternoon, so we were given a city bus tour of Guayaquil.   Guayaquil is the largest and the most populous city in Ecuador with around 2.7 million people in the metropolitan area.  The city is also the nations' main port. 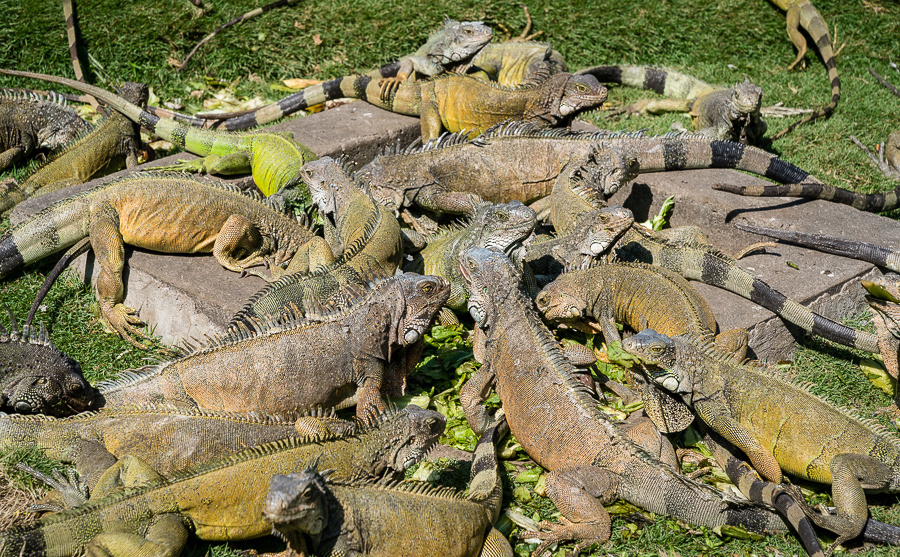 One of the stops on the tour was Iguanas Park which had dozens of iguanas living on its trees and in the grass.  They were everywhere. 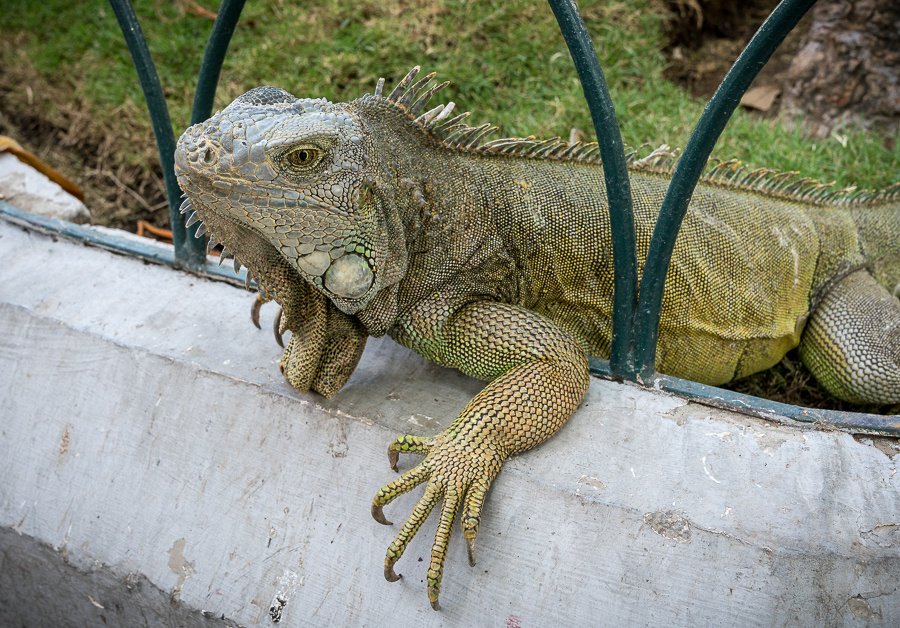 A close up look of one of the Green Iguanas that we came across.  The green iguana is also known as the American iguana.  It is one large lizard. 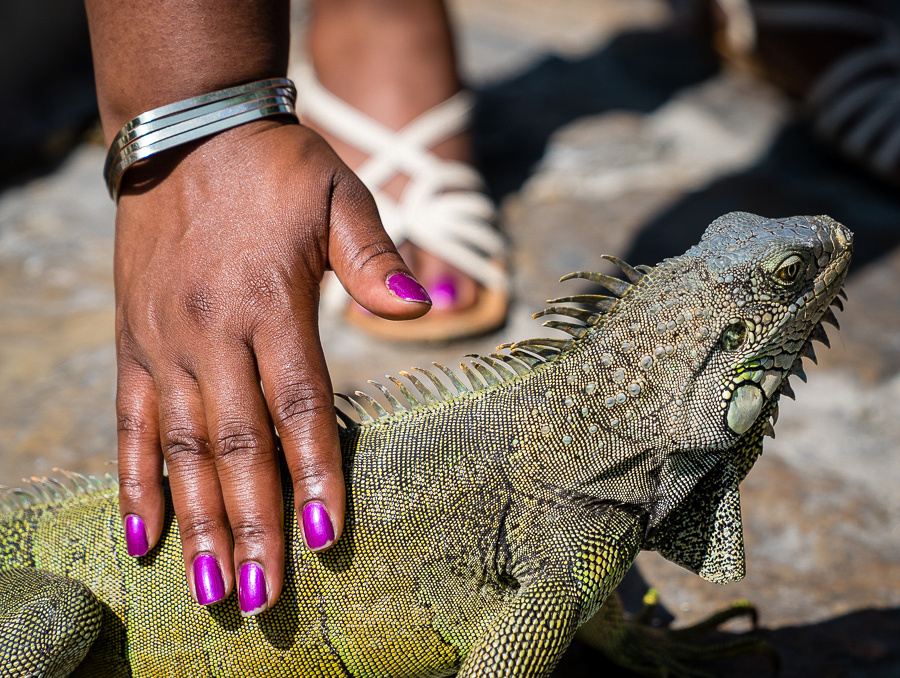 These lizards werefriendly and safe to pet. 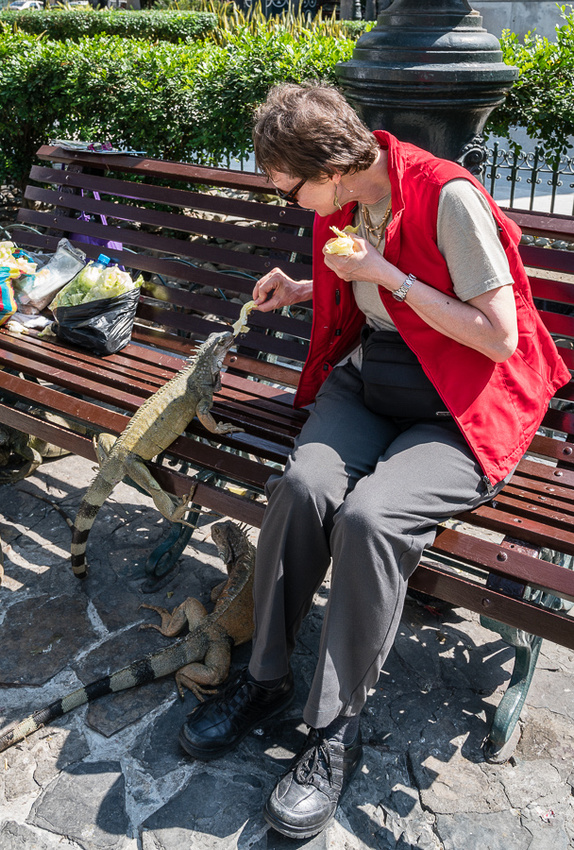 These lizards are primarily herbivores, feeding on leaves, flowers and fruit.  They seemed especially fond of lettuce. 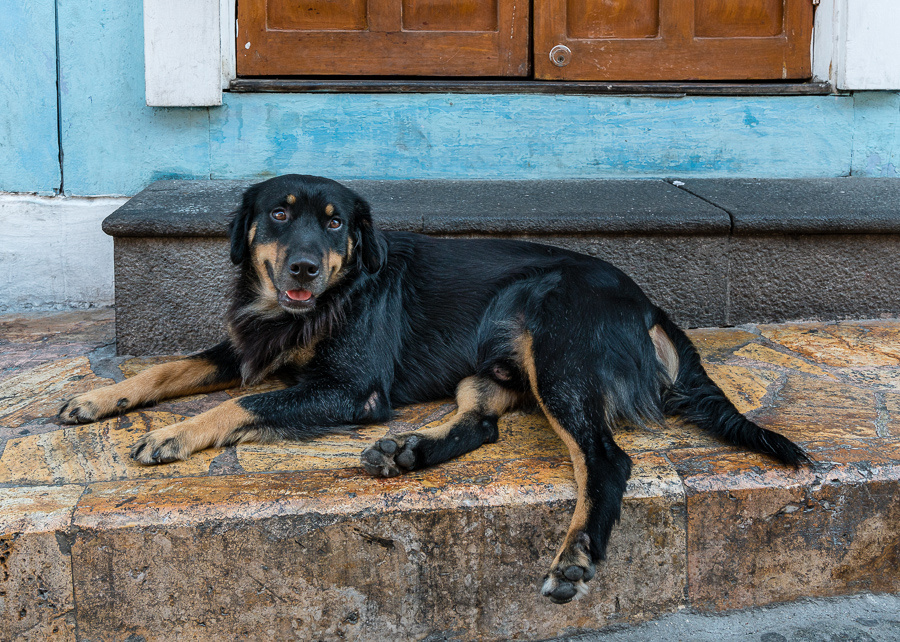 The tour also took us down some local streets where this dog was enjoying his day.  After the tour we flew to the island of San Cristobal  to board our ship. 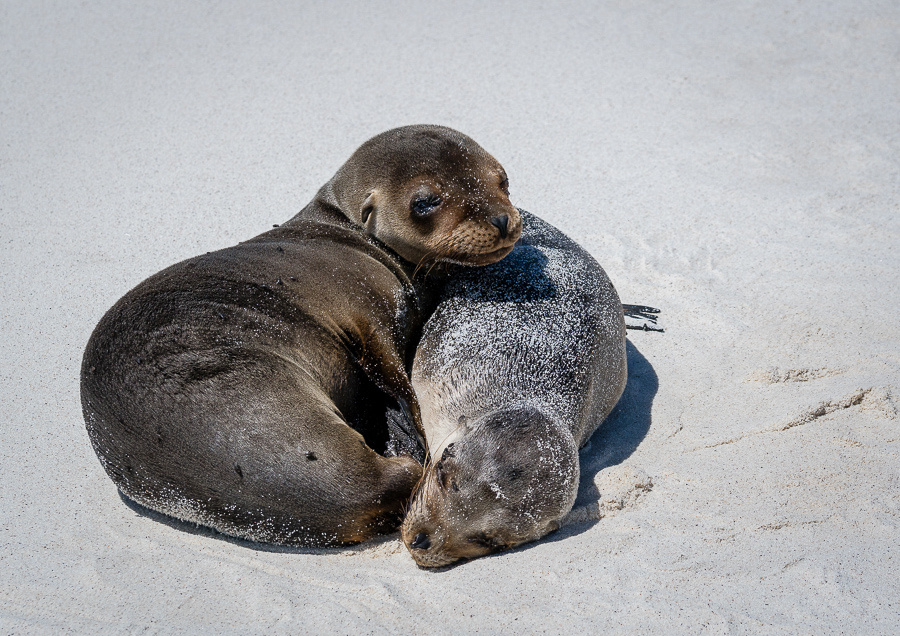 Our first outing into the east Pacific Ocean occurred mid-morning on May 22nd.  Our landing was on Gardner beach on Espanola Island.  Here was my first close-up look at the Galapagos sea lions. This is the southeastern-most island and of one of the oldest and most isolated.  Due to the direction of the winds and ocean currents, species that successfully arrived (by floating, swimming or flying) found themselves isolated for the next few millennia. 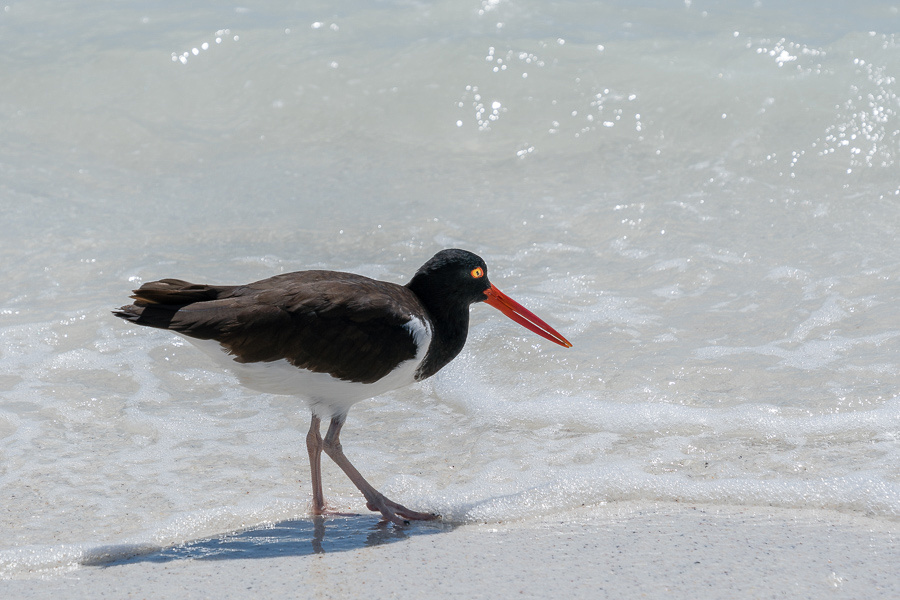 A Galapagos oystercatcher.  These birds have massive long orange or red bills used for smashing or prying open mollusks. 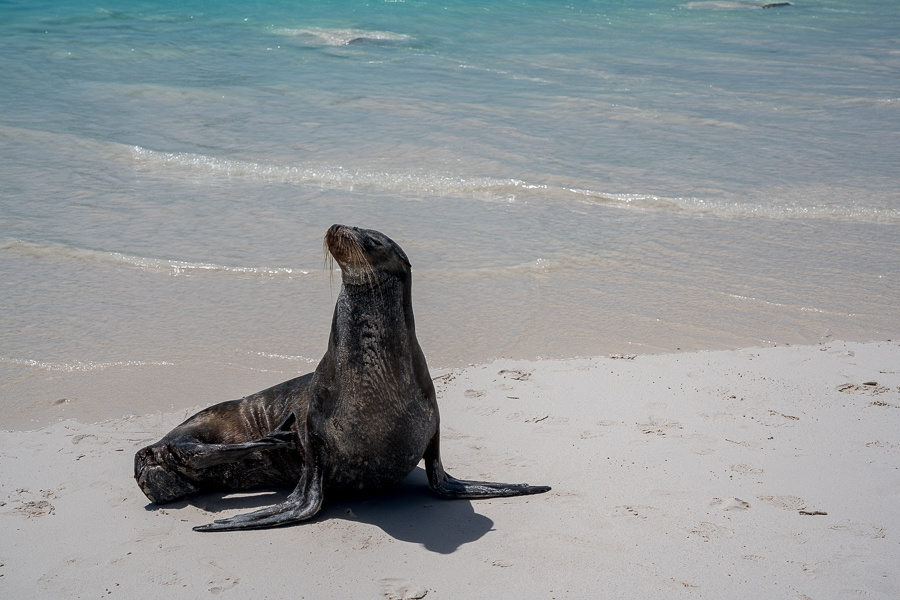 The Galapagos sea lion is a species of sea lion that exclusively breeds on the Galapagos Islands and in smaller numbers on Isla de la Plata (Ecuador).  Being fairly social, they are often spotted sun-bathing on sandy shores or rocks.   These are small sea lions who have loud barks and a playful nature. 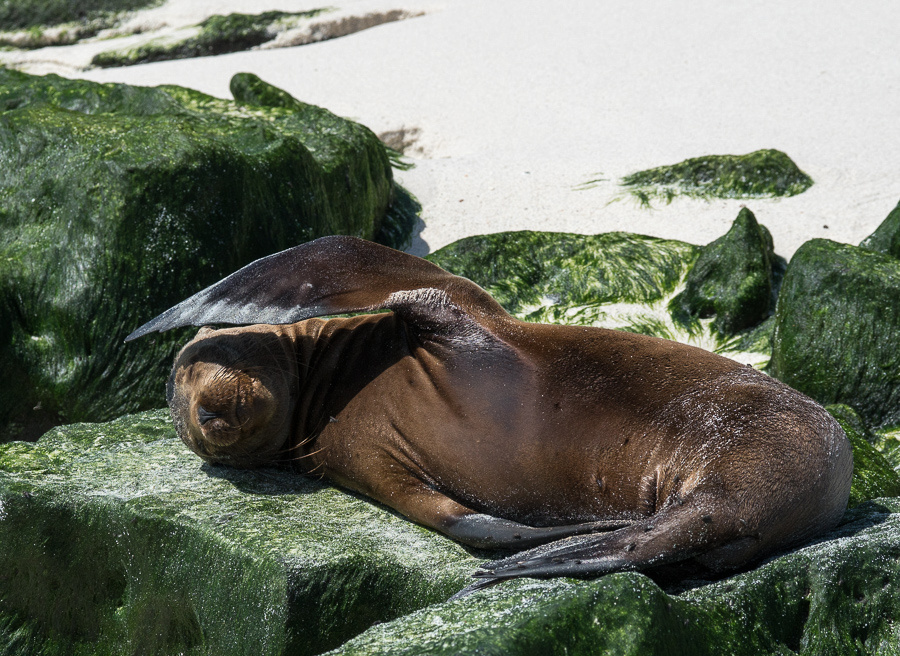 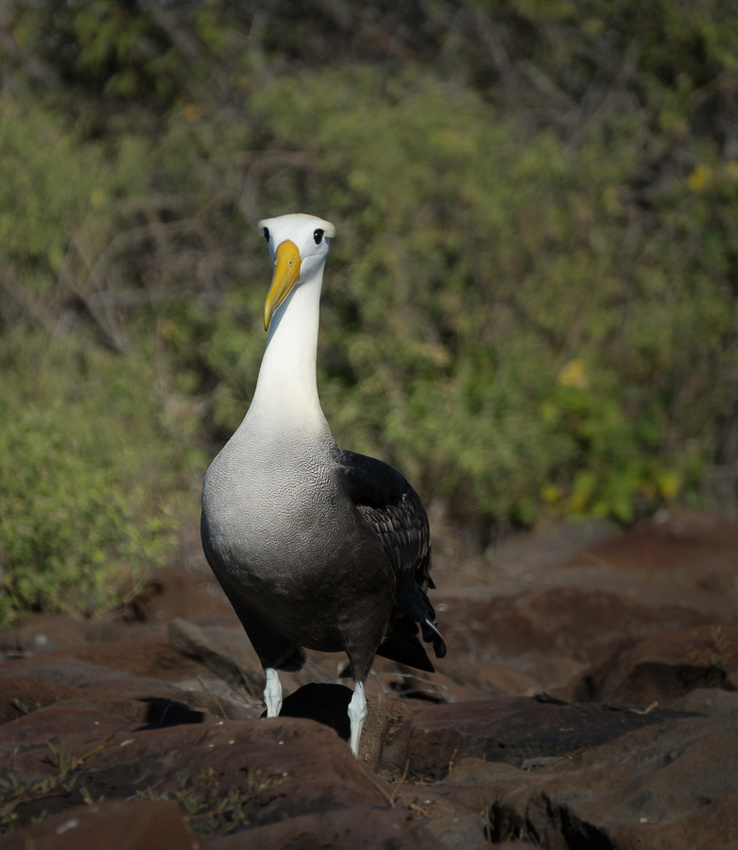 The afternoon was spent on the far western-most point of land, known as Punta Suarez.  We walked along a long, very rocky trail established by the Galapagos National Park Service.  The giant loop allowed us to see lots of albatross as shown in the photo above.  This is the only island in the Galapagos where the waved albatross can be seen.  We watched them in couples, preening, sleeping, courting, incubating eggs and flying overhead. 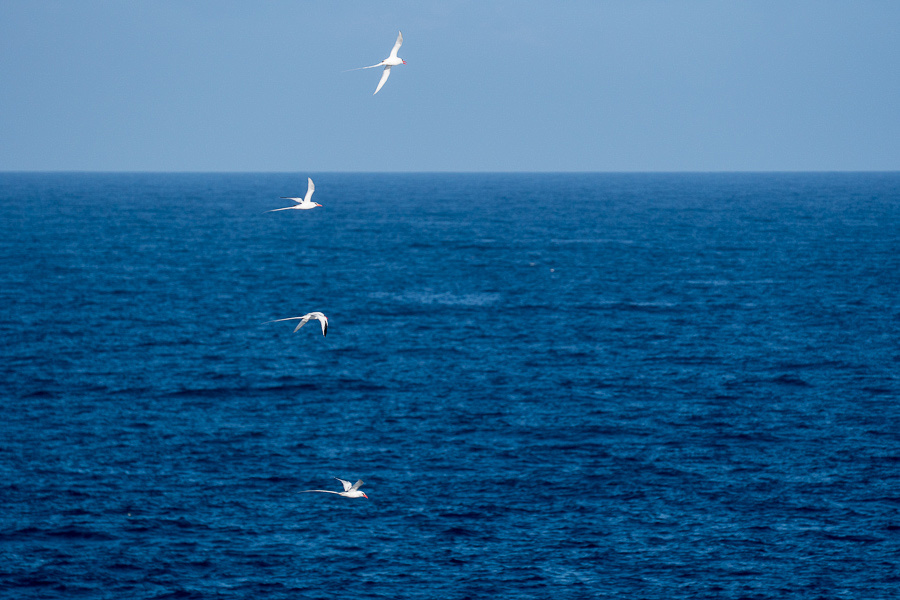 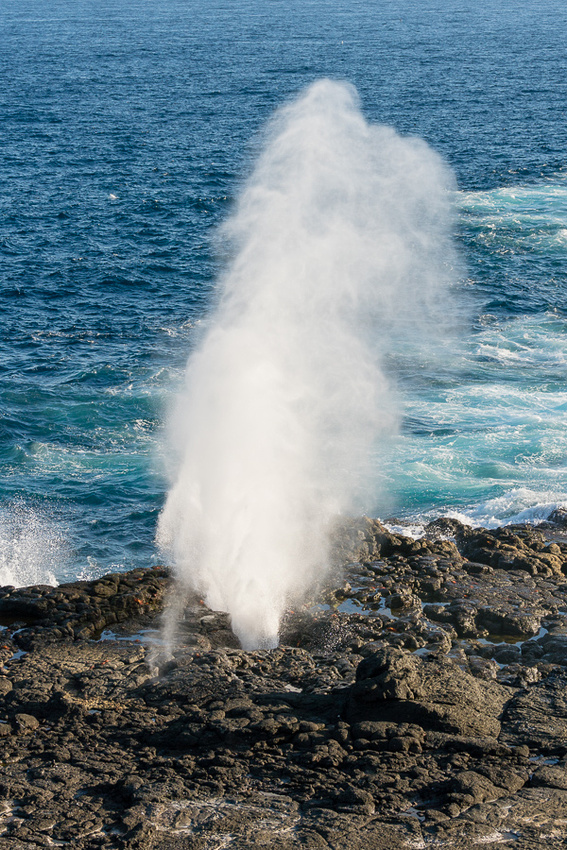 We watched waves crash into a lava fissure, creating a blowhole that sprays water nearly 30 m into the air at high tide. 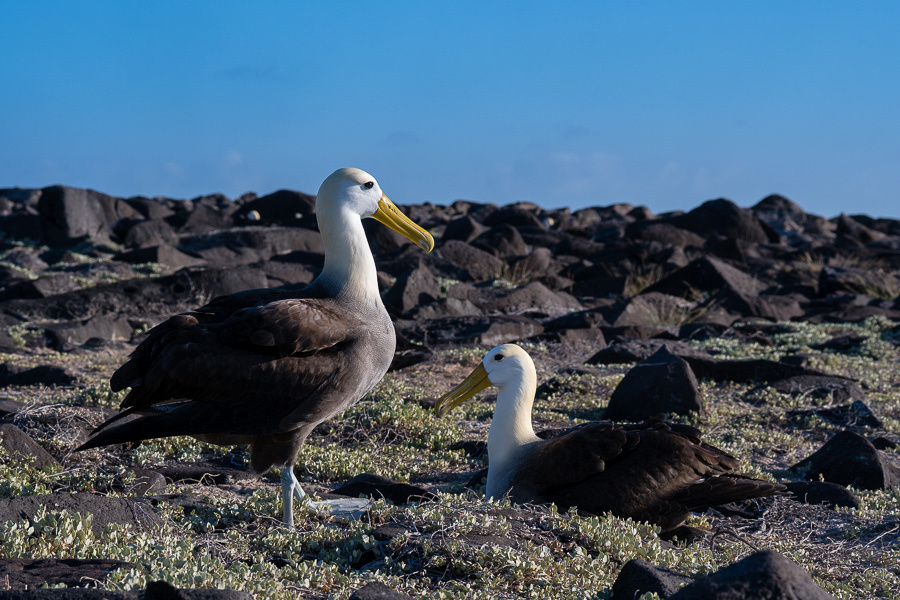 The primary food sources of the albatross are fish, squid and crustaceans, as well as smaller birds.  Their nests are built on areas of lava with boulders and sparse vegetation.

The courtship of the birds includes rapid bill circling and bowing, beak clacking and an upraised bill to make a whoo hoo sound. 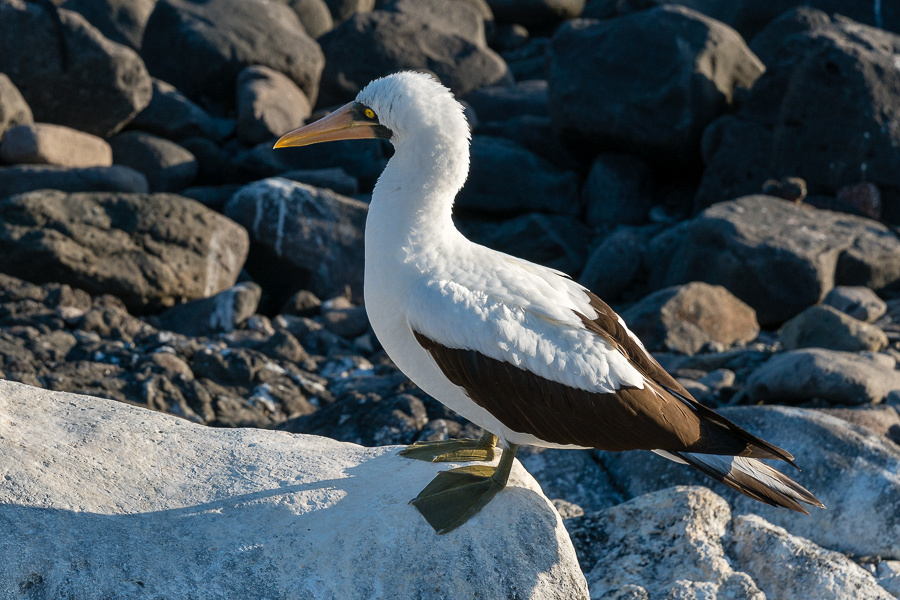 A Nazca booby.  These birds nests near cliffs on bare ground with little to no vegetation.  The Nazca booby is the largest of the Galapagos boobies-with a length of 3 feet and a 5-6 foot wingspan.  The bird is found on most of the islands. 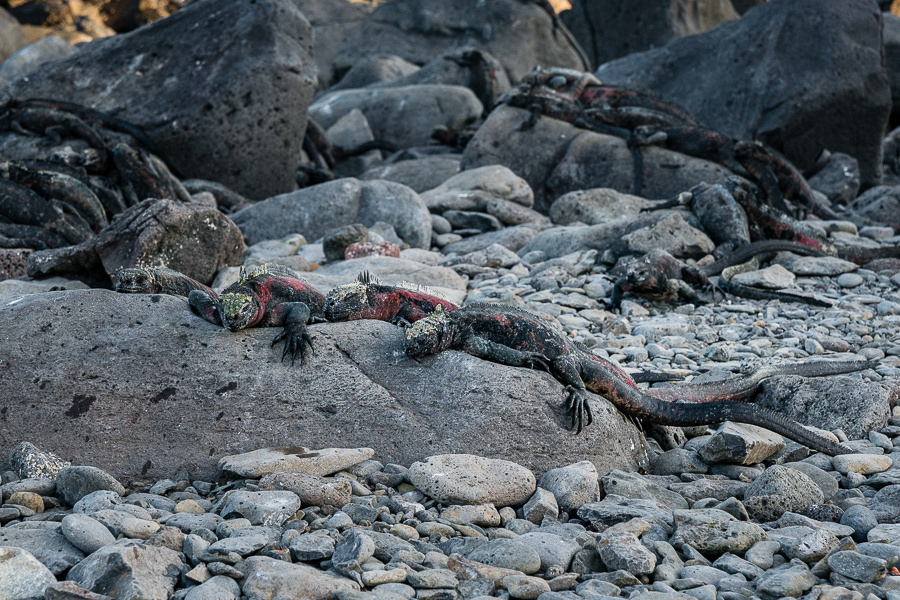 The marine iguana also known as the Galapagos marine iguana, is a species of iguana found only on the Galapagos Islands.  This iguana feeds almost exclusively on algae.  Large males dive to find this food source.  The females and smaller males feed during low tide in the intertidal zone.  These iguanas mainly live in colonies on rocky shores where they warm up after being in the relatively cold water.  I liked how colorful they were and how absolutely unafraid of people they seemed to be.

Craig Sundby(non-registered)
Thanks Marsha. You get to so many places I'm looking at going myself. I always enjoy reading your experiences and of course your photos. I'm looking forward to reading about the rest of this adventure.
bruce godden(non-registered)
I'd love to be the Sea Lion, what a life:-)
Hope your travels take you far and wide in 2019.
Carol(non-registered)
Hi Marsha
Loved these pictures. Hope to get their someday!