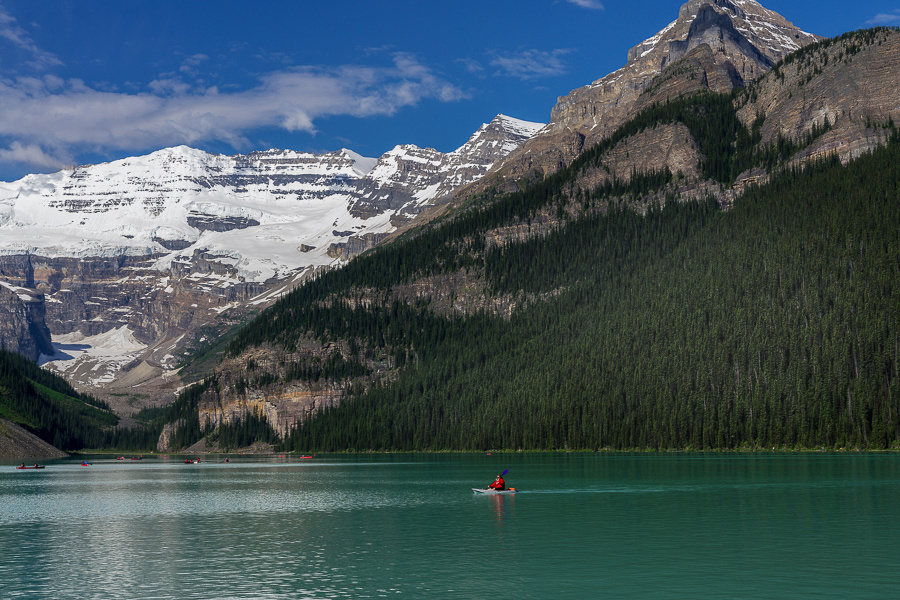 The next morning we left  Camden for   Golden B.C.   We stopped at Lake Louise on the way.  Lake Louise was named Lake of the Little Fishes by the Stony Nakota First Nations people.  It is a glacier lake within Banff National Park. 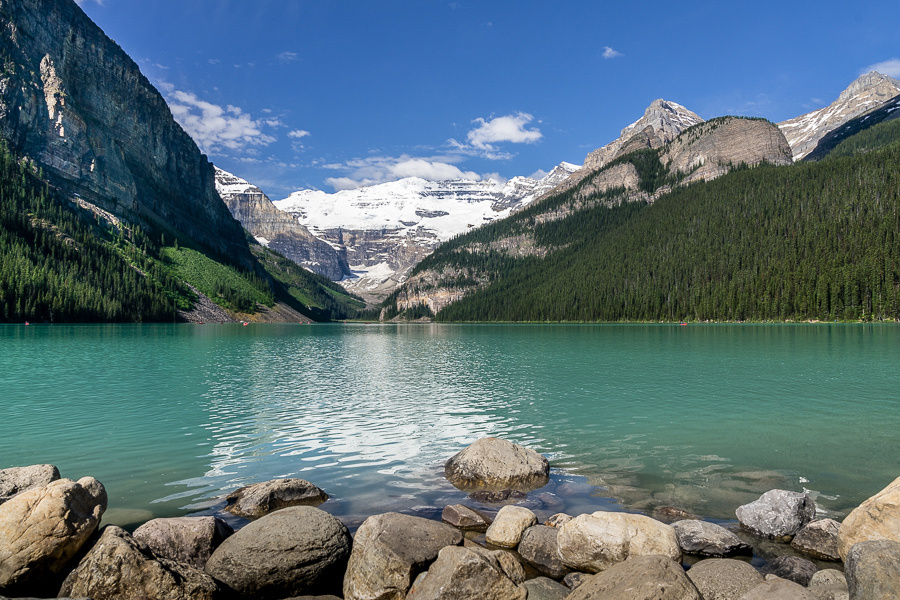 The emerald color of the water comes from rock flour carried  into the lake by melting water from the glaciers that overlook the lake. 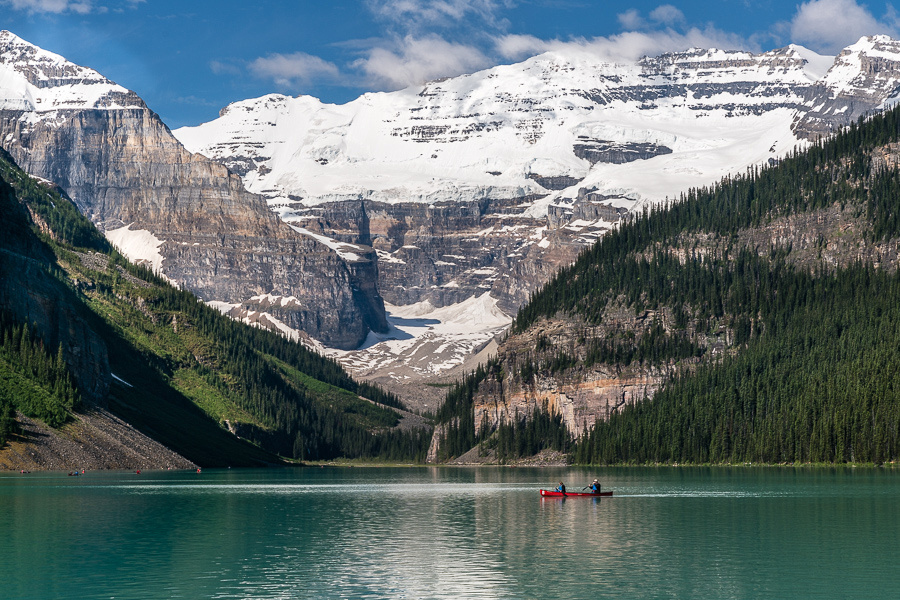 We spent a good part of the morning hiking along the trail beside the lake.  The lake was named after the Priness Louise Caroline Alberta, the fourth daughter of Queen Victoria and the wife of the Marquess of Lorne, who was the governor general of Canada from 1878 to 1883. 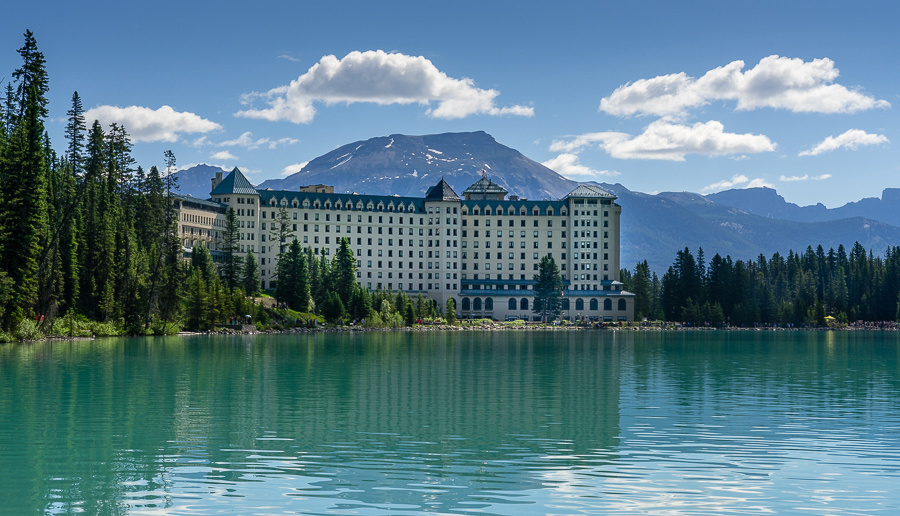 Fairmont's Chateau Lake Louise, is one of Canada's grand railway hotels.  The luxury resort hotel was built in the early 20th century by the Canadian Pacific Railway. 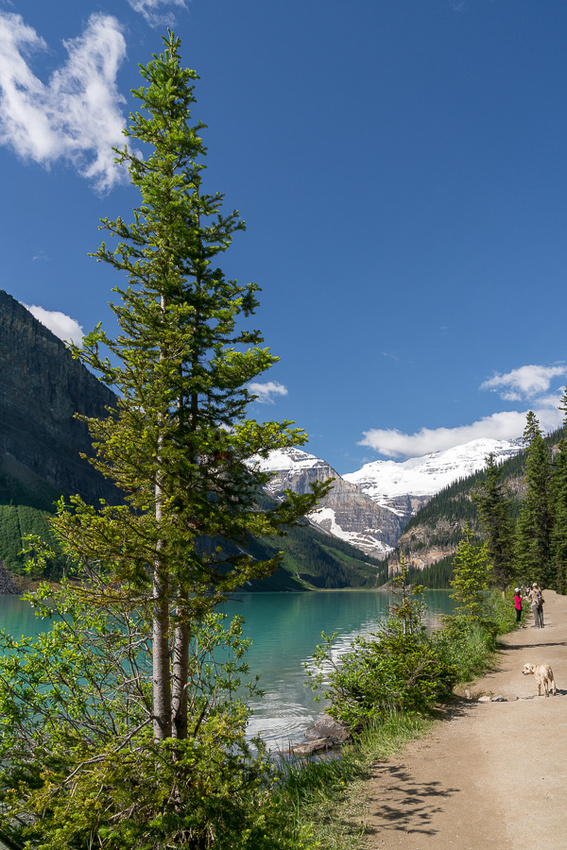 The trail beside the lake goes a long way.  You can also pick up other hikes from this trail. 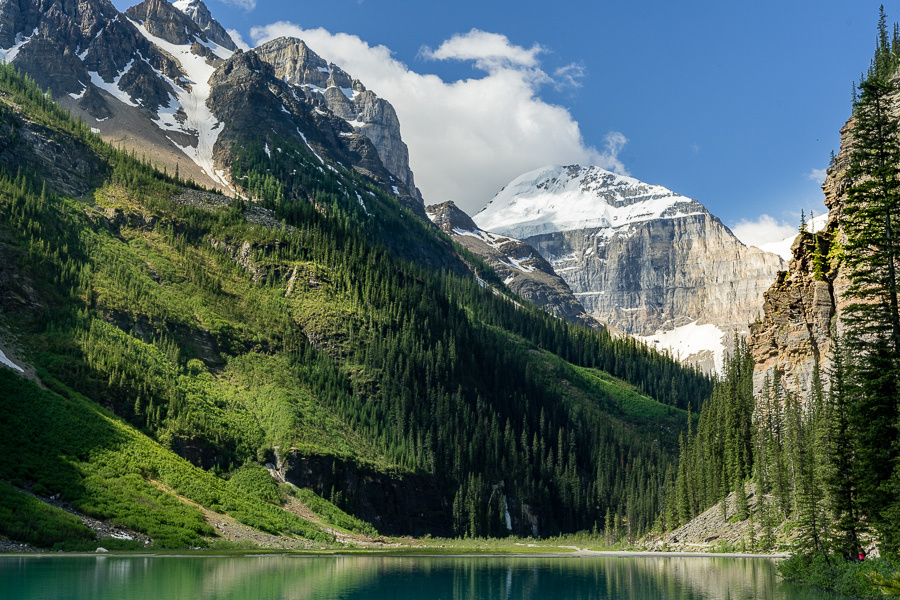 All of these photos were taken from the trail. 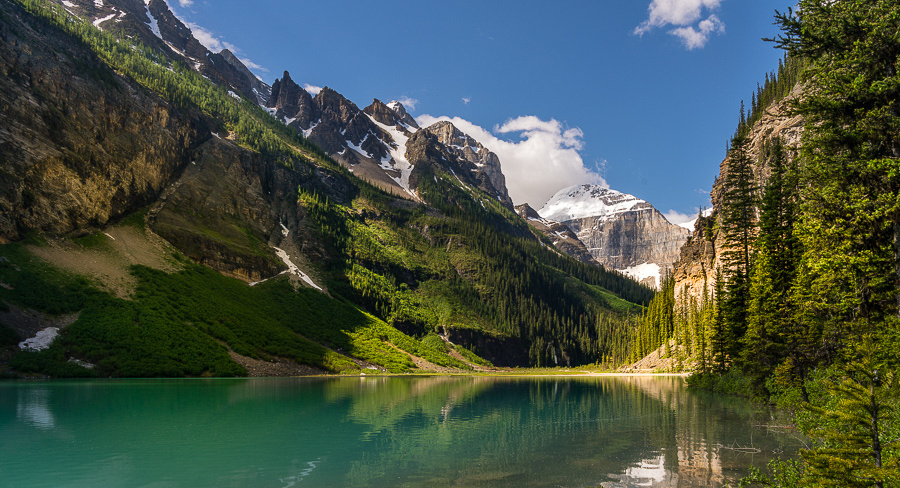 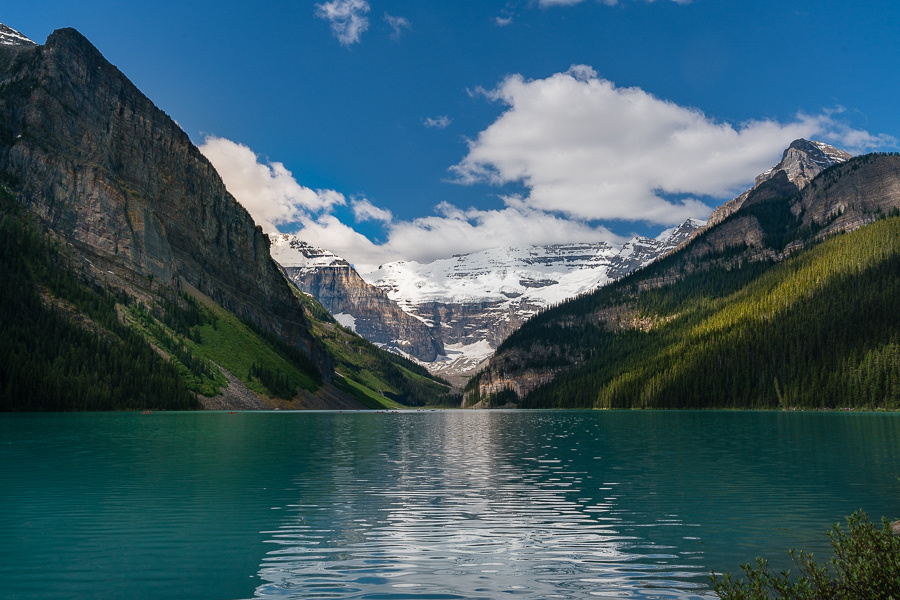 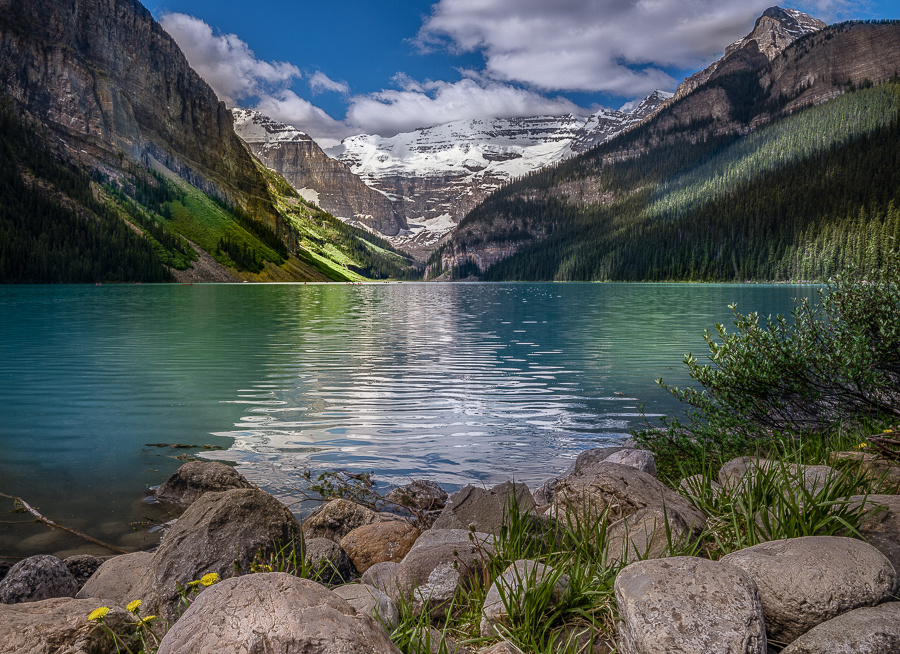 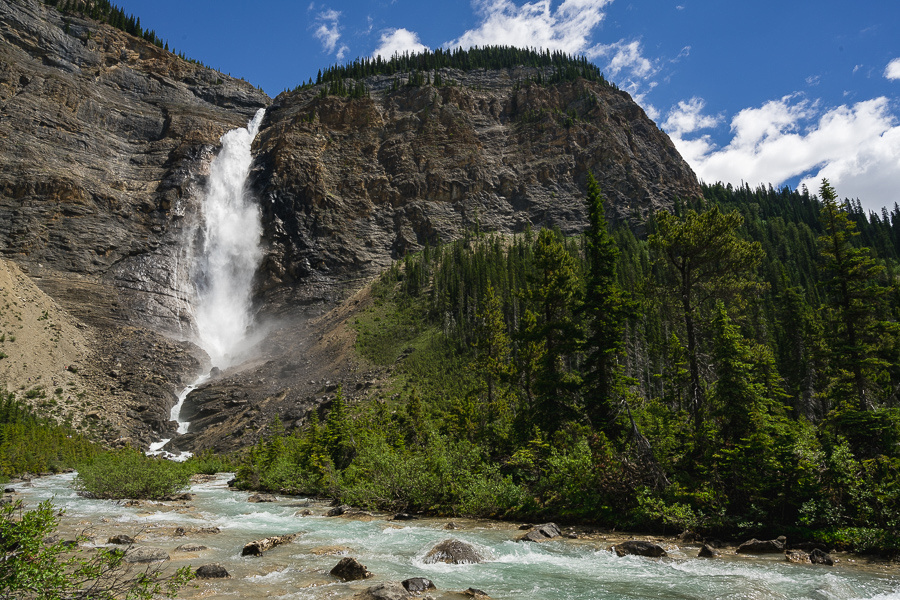 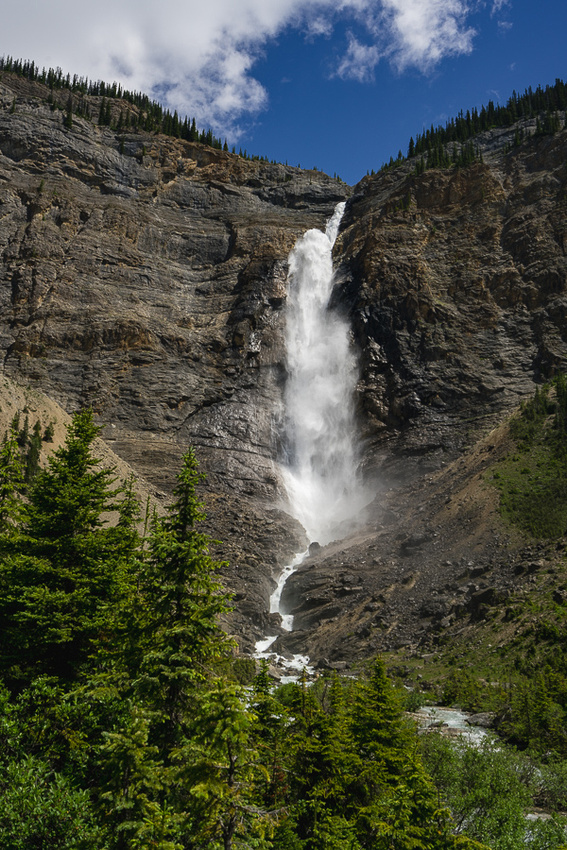 "Takakkaw", loosely translated from Cree, means something like "it is magnificent".  These falls were featured in the 1995 film, Last of the Dogmen. 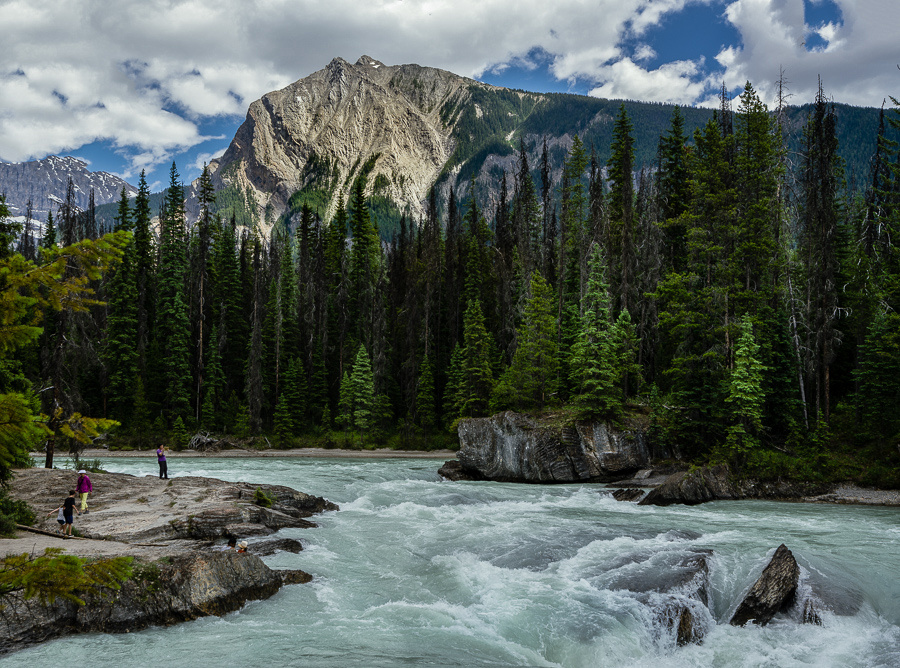 Later on in the afternoon we stopped at Kicking Horse River located in Southeastern British Columbia.  The river was named in 1858, when James Hector, a member of the Palliser Expedition, reported being kicked by his packhorse while exploring the river. 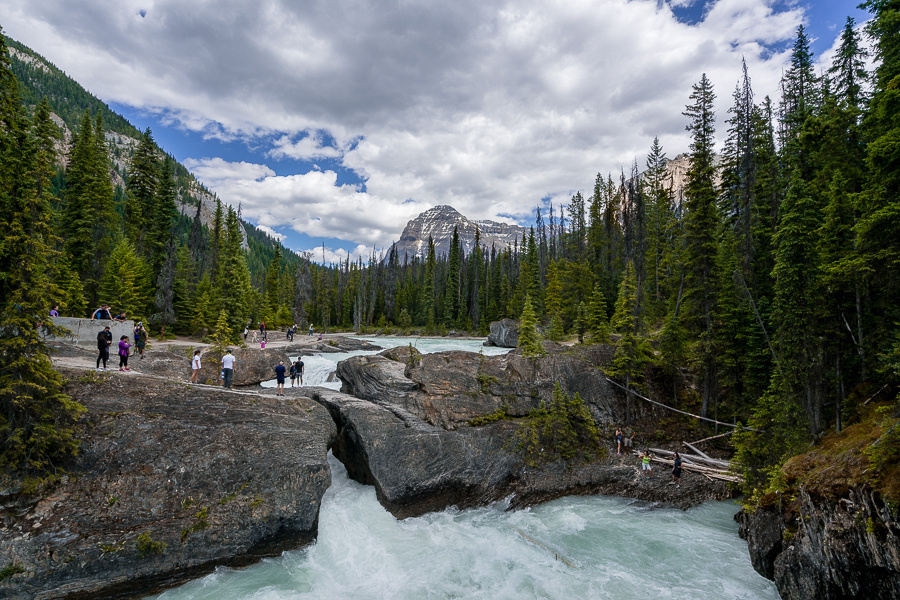 The Natural Bridge is an impressive natural rock formation that spans the flow of the Kicking Horse River west of Field. 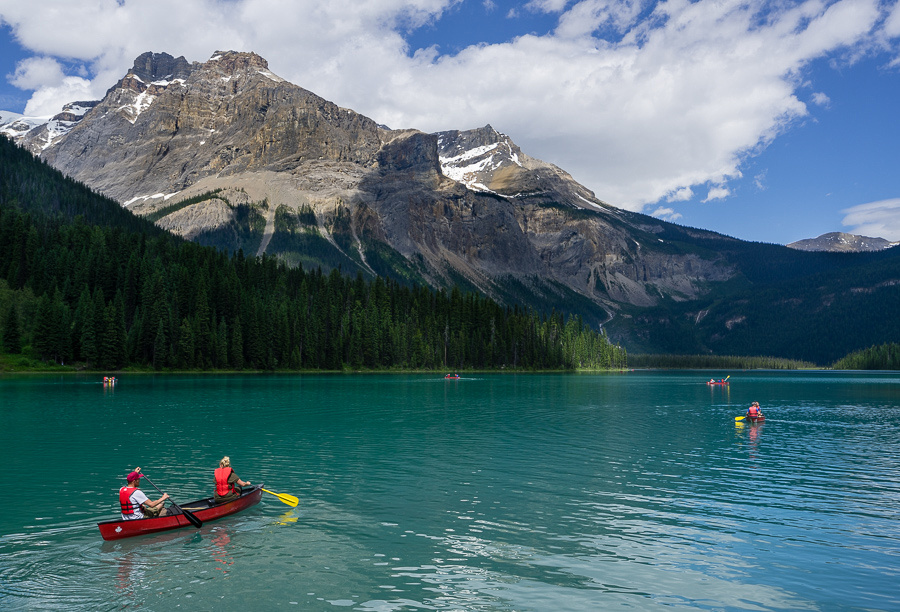 One more beautiful lake that we came across before getting to Golden.

Marsha, I particularly like the picture (ninth from top) with the yellow flower blossoms. The colours you've captured give the scene great life.
Tricia Matheson(non-registered)
I second what Wendy said. Photo of Katie by the lake is fabulous. Love how you got several shots that showed the play of light as the clouds parted and different parts of the Lake Louise surroundings were illuminated. Any of these photos could be used as a See Canada Now! postcard.
Gerda Grice(non-registered)
Great set of images, Marsha! I especially love the ones with the little boats in them. They add wonderful colour accents and really help bring the viewers into the images.
Wendy(non-registered)
Great pictures, Marsha. I love the one of Katie along the river and the hotel at Lake Louise. The colours/composition are great.
No comments posted.
Loading...
Subscribe
RSS
Recent Posts
Last evening in Chania Chania and Selton Litania Beach Chania and Balos Beach Sunrise in Chania and a morning visit to the market Rethymno's market and a visit to Anogia Village Early morning in the harbour of Rethymno and a visit to the Fortezza Fortress Crete, day 3 Crete, day 2 Crete Last day on Milos
Keywords
Croatia Crete Morocco Cuba alberta National Park galapagos Newfoundland France
Archive
January February March April May June July August September October November December
© Marsha Fouks