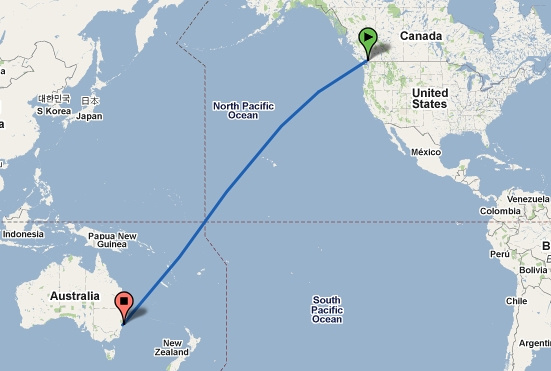 On November 4th, 2019 I flew to Sydney Australia for a 5 week adventure.   My sister, Wendy who lives in Vancouver would be joining me for most of the time.   I started in Toronto, flew to Montreal (yes, wrong direction but that is what happens when you use points to fly), caught a flight to Vancouver and just before midnight (same day) flew to Sydney.  I left for the Toronto Pearson Airport around noon  and arrived in Sydney, Australia on November 6th (two days later) at 10.30 am Australian time.  The approximate flying time was 22 hours.  Fortunately, I was able to get some sleep on the flight to Sydney and it didn't seem  difficult to adapt to the new time zone.  However, arriving back in Toronto was a different story! 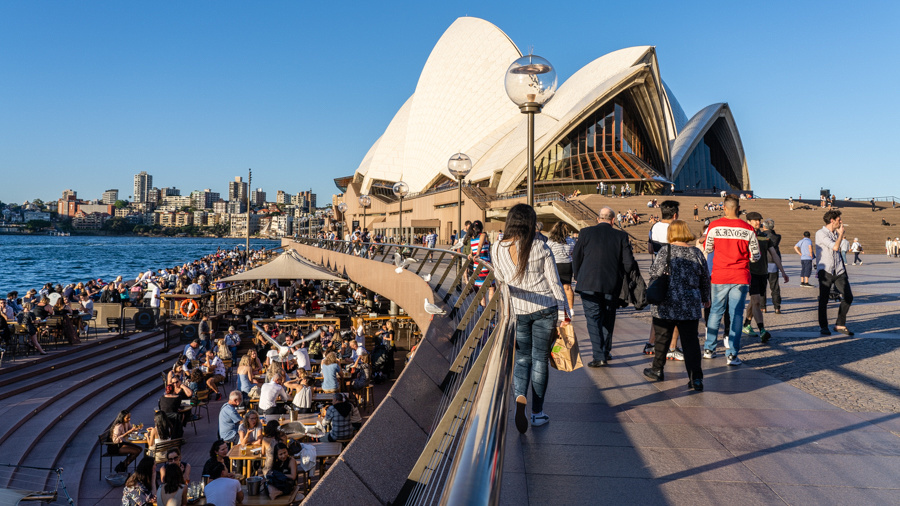 After checking into our hotel and getting organized, Wendy and I went for a tour of the famous Opera House.  The Sydney Opera house cost $102 million (estimate was $7m) to build.   The majority of the project was funded by a state lottery.   Construction was expected to take four years but ended up taking fourteen years.  233 designs were submitted in the Opera House international design competition and the winner was announced in 1956- Jorn Utzon from Denmark who received 5,000 pounds for his design.

We walked through the botanical gardens in the late afternoon.    It was interesting to note that the photographer was using his phone to photograph instead of the camera.  However, perhaps it was one of the ladies cellphones. 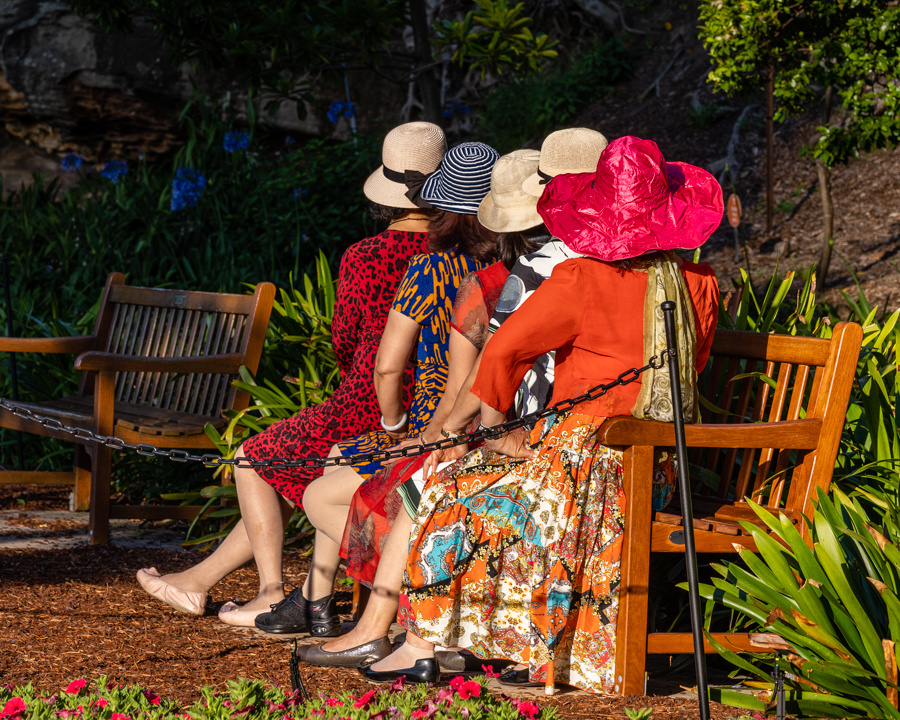 I liked the idea of photographing the women from the back to show off  their  hats.  Wendy and I both had the same idea at the same time. 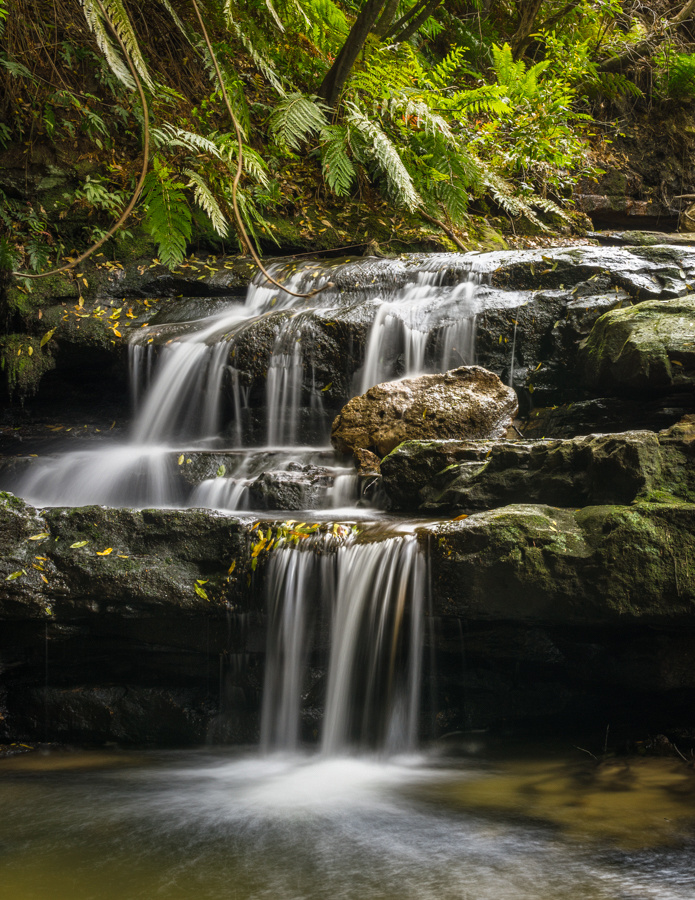 The day after we arrived in Sydney we took a day tour to the Blue Mountains, a mountainous region about 50 km (31 mi) from Sydney.  The area was listed as a World Heritage Area by UNESCO on November 29, 2000.  We just saw a very small part since the area totals approximately 10,000 square kilometers (3,900 square mi).  We did some hiking and of one of the hikes was to see the waterfall pictured above. 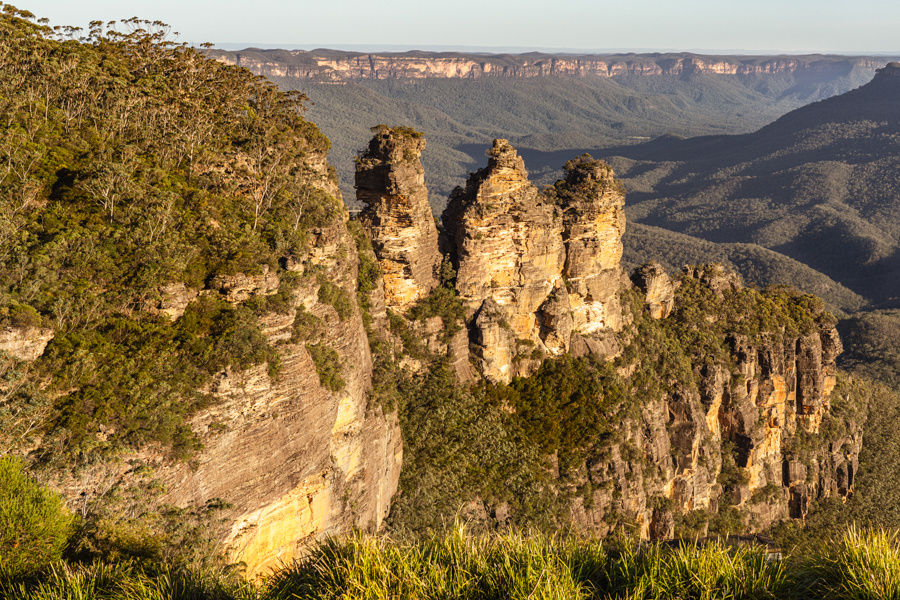 A vist to the Blue Mountains is not complete without seeing the Three Sisters, formed by land erosion.   We chose to take the tour which would arrive in the area in the early evening so we would have some nice light.   The sandstone of the Blue Mountains was eroded over time by wind, rain and rivers, causing the cliff's surrounding the Jamison Valley to be slowly broken up.   The legend is that the three sisters lived in the valley, fell in love with three men from the neighboring Nepean tribe but marriage was forbidden by law.  The brothers decided to capture the sisters which caused a major tribal battle.  In order to protect the sisters, an elder turned them to stone but naturally he was killed in the fighting and no one else could turn them back. 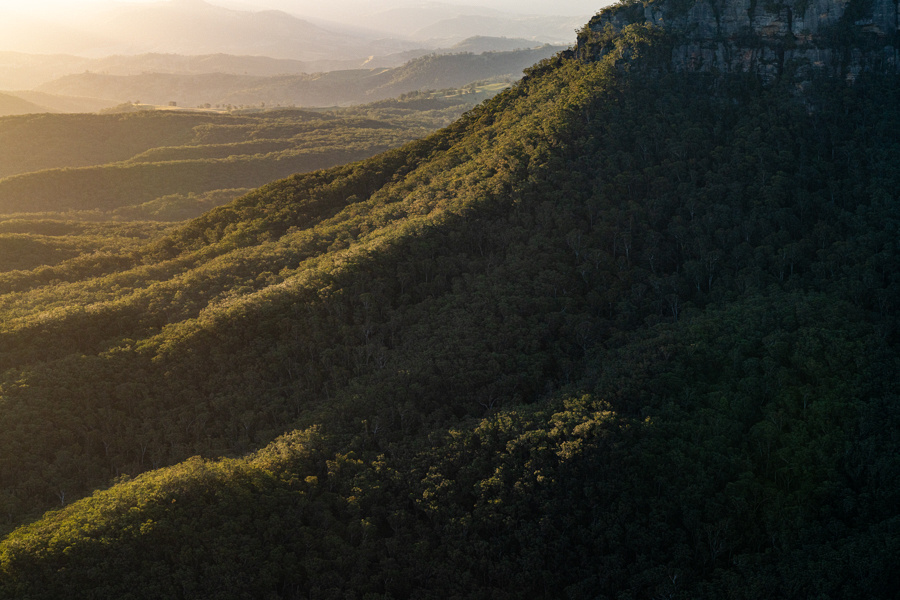 A photograph of the hills taken just before sunset. 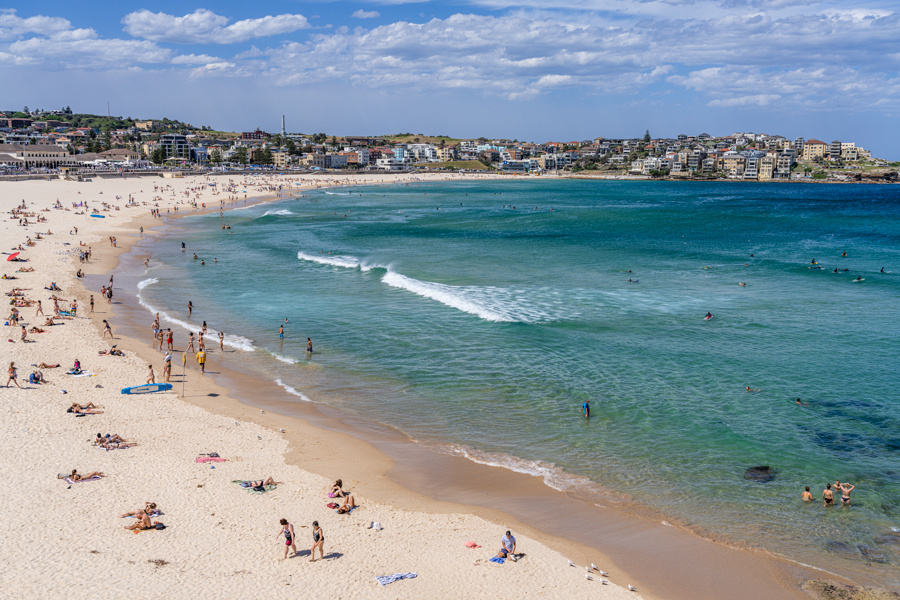 Wendy and I visited  the well known Bondi Beach.   We walked along the 3.7 mile ocean walk taking in the beaches, cliffs and various viewpoints.  It was a beautiful, warm day so there were a lot of people taking advantage of the weather.

Later in the afternoon, we ended up taking a bus to Watson's Bay where we could see Sydney Skyline in the distance.  We enjoyed fish and chips on the pier before catching a ferry back to Sydney.

A photo from the ferry as we approached the city. 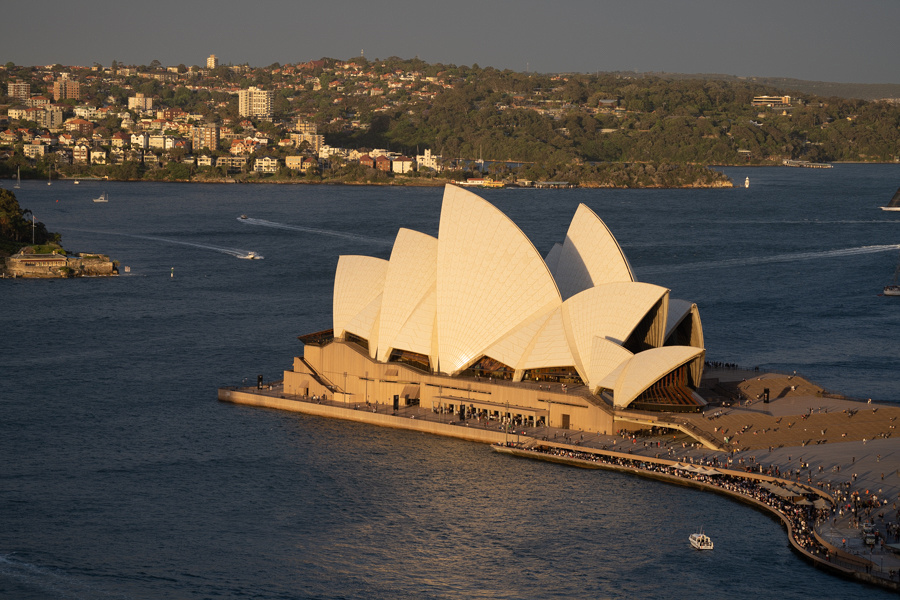 One night we decided to photograph the city from the  open rooftop of the hotel we were staying in.  The Danish designer of the Opera House, Utzon, found himself in conflict with the new Minister of Public Works (Hughes) who had no interest in art, architecture or aesthetics.  Attempting to  rein in the escalating cost of the project, Hughes began questioning  Utzon's capability, designs and cost estimates, refusing to pay running costs.  In 1966 after a final request from Utzon that plywood manufacturer Ralph Symonds should be one of the suppliers for the roof structure was refused, Utzon resigned from the job and left Australia.  When Utzon left, the shells were almost complete and costs amounted to only 22.9 million.  Following major changes to the original plans for the interiors, costs finally rose to $103 million.  Sadly, Utzon never saw the completed Opera House.  When the Opera House was finally completed in 1973 and opened by Elizabeth II, not only was the architect not invited to the ceremony, his name was not even mentioned.   However, later on he was recognized when he was asked to design updates to the interior of the opera house. 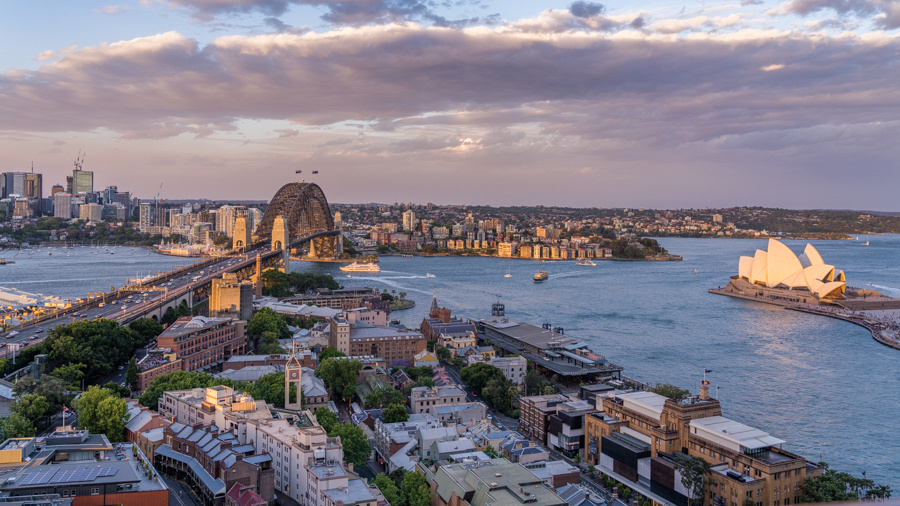 The view of the bridge, the harbour and the nearby Sydney Opera house is regarded as an iconic image of Sydney. 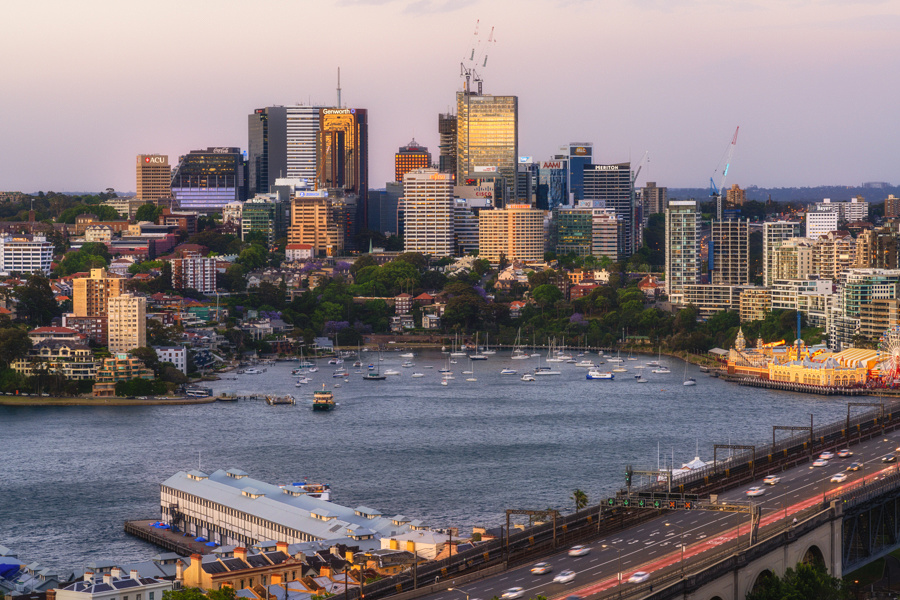 A view of North Sydney.  One evening we would photograph sunset from North Sydney looking towards our hotel. 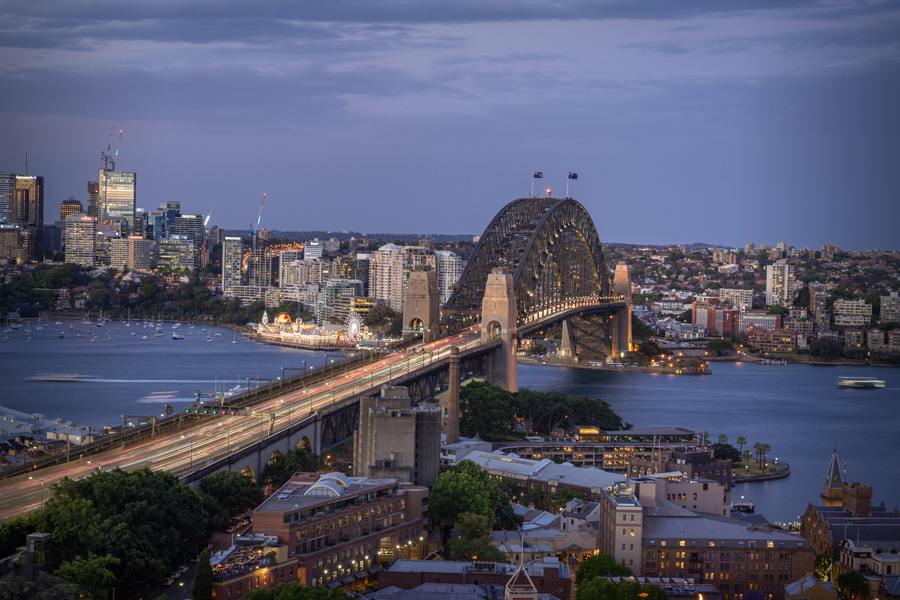 We stayed on the rooftop  and photographed until the  blue hour- the sun was below the horizon and the residual, indirect sunlight takes on a predominately blue shade.  What happens is that " the sun is far enough below the horizon so that the sunlight's blue wavelengths dominate due to the Chappuis absorption caused by ozone".   It sounds complicated- basically, blue hour occurs after the sun has set or before the sun has risen. 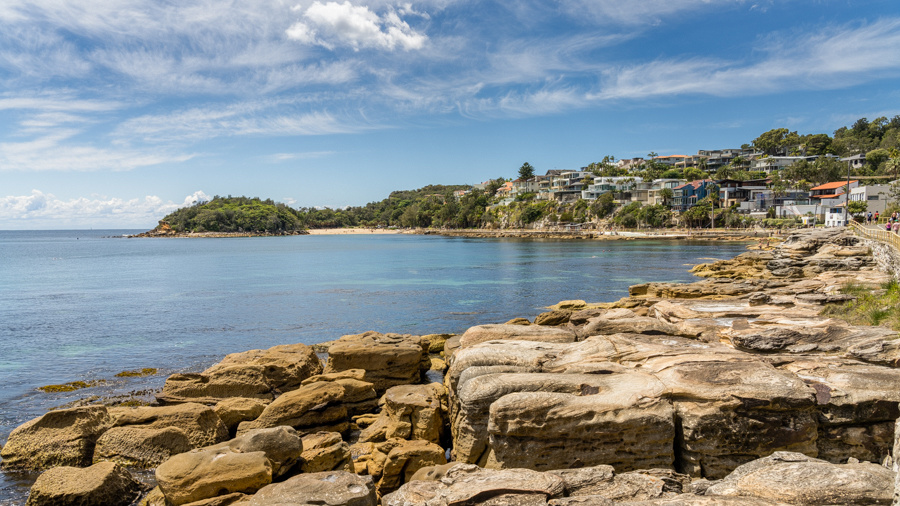 One day, we took a 30 minute ferry boat ride from Circular Quay to Manley Beach where there were lots of shops, restaurants, night clubs and bars. 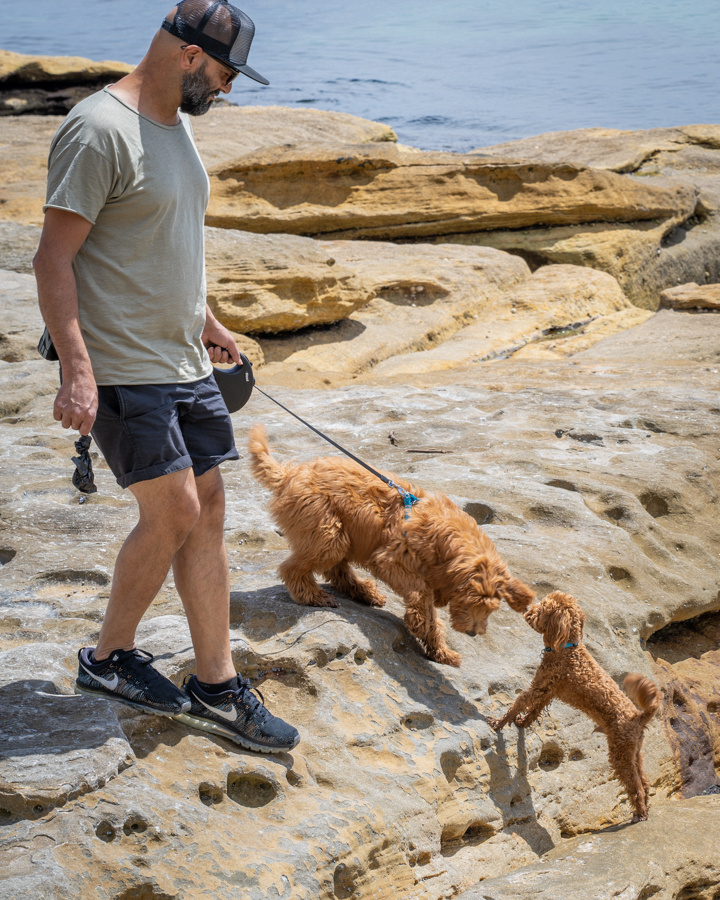 We  spent the morning at Manley Beach, walking in the town and along the ocean way passing Fairy Bower and Shelley Beach. 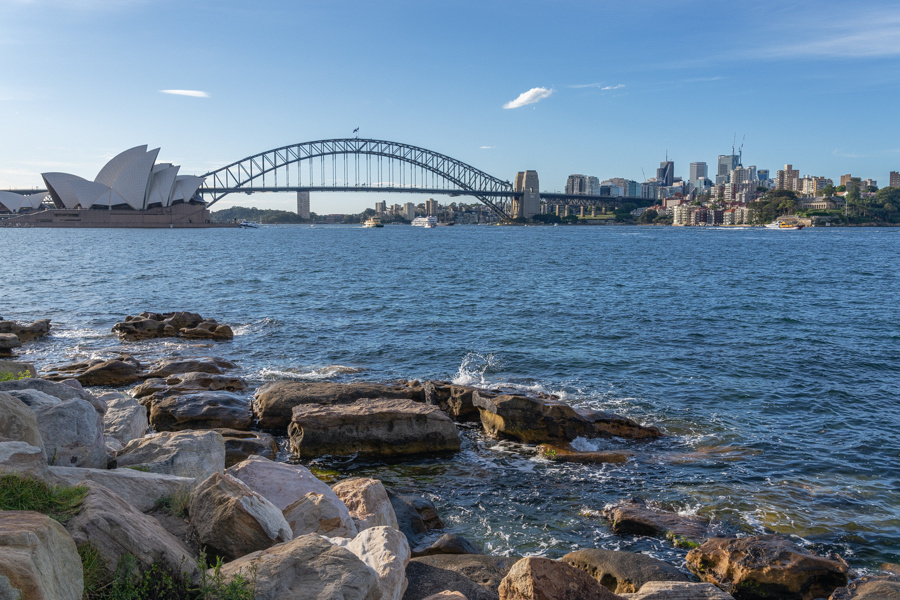 This photo overlooking Sydney was taken from Macquarie's Road. The road was built between 1813 and 1818 and ran from the original Government House to Mrs. Macquarie's Point.  Major-General Lachlan Macquarie, Governor of New South Wales from 1810 to 1821 had the road built for the benefit of his wife as she was known to visit the area to enjoy  the panoramic views of the harbor. 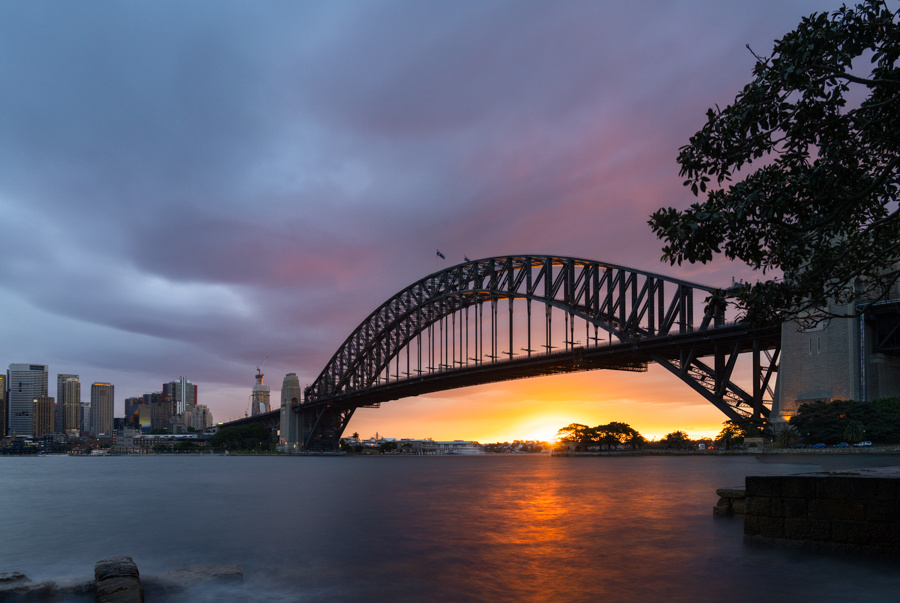 The next set of photos were taken from the other side of the bridge-in North Sydney. There  was enough of a break in the clouds to get some beautiful colors in the sky and water. 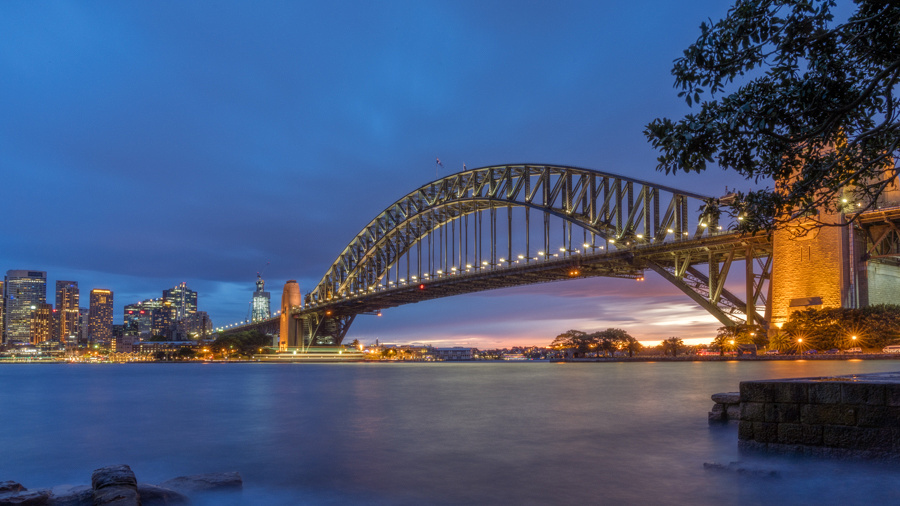 Blue hour from the same position.  The Sydney Harbour bridge was designed and built by a British firm and opened in 1932.  The bridge is the sixth longest spanning-arch bridge in the world. 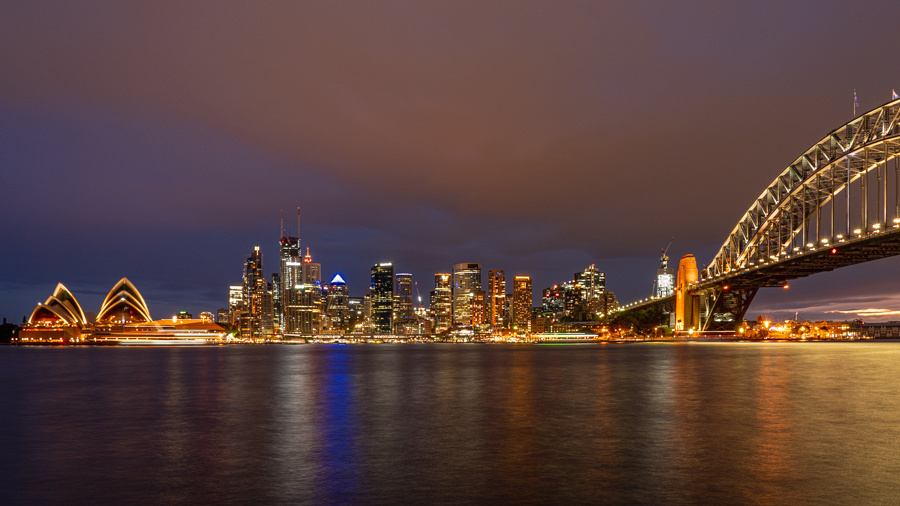 We waited until the lights from the city came on. 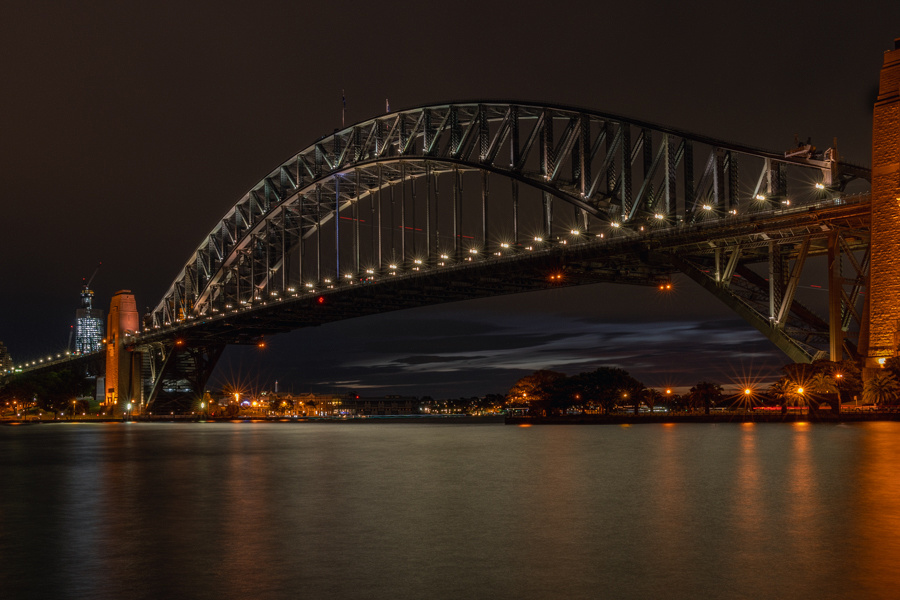 The last shot of the evening. 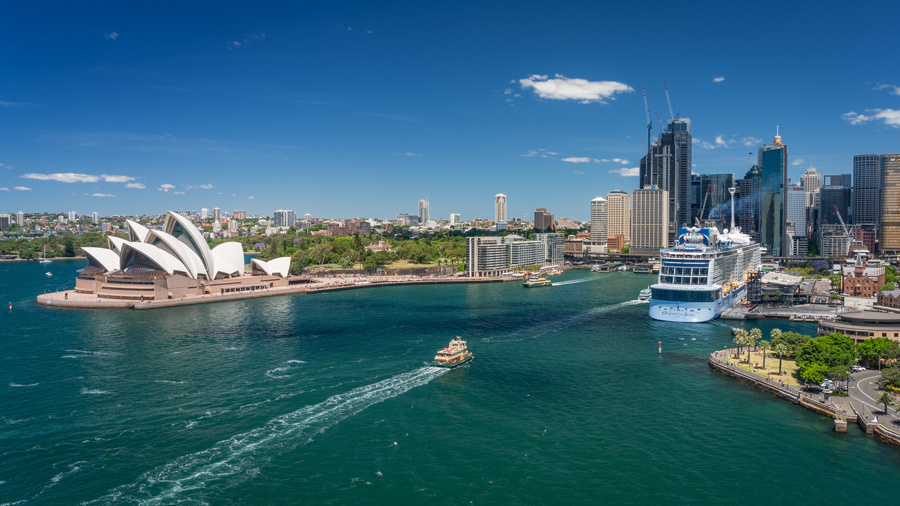 The next  morning we walked across the Sydney Harbour bridge to the north side (where we had photographed the evening before).  Adjacent to the road traffic, there is a path for pedestrian use which runs along the eastern side of the bridge. As you can see, Sydney is a popular spot for cruise ships. 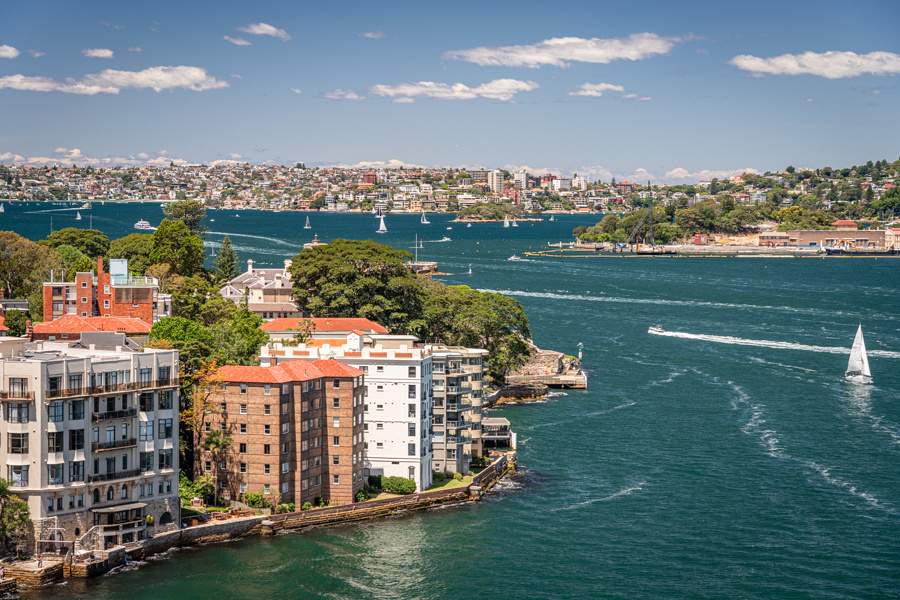 Another photograph taken from the bridge. 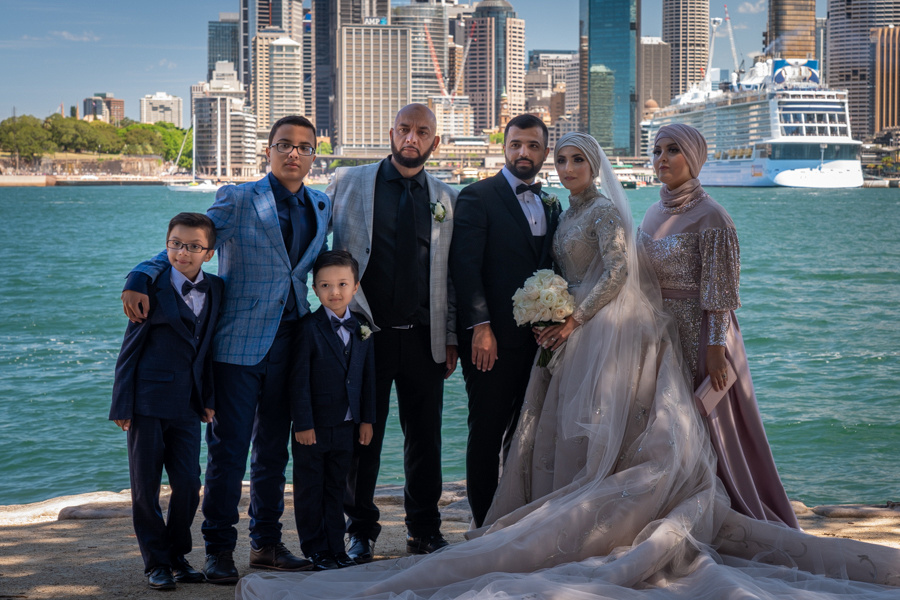 While walking along the beach in North Sydney, we came across wedding photos being taken. 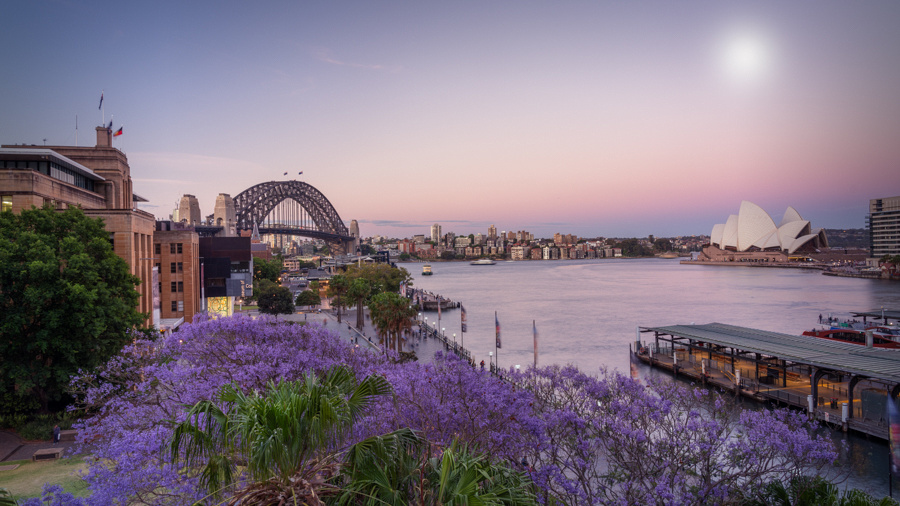 On our last night in Sydney, we went back to photograph the harbour from a different area.   Wendy loved the purple flowers on the Jacaranda trees.  The tree is actually a sub-tropical tree native to south-central South America.  Australia has had problems with this tree as it prevents growth of native species.  We saw them everywhere in Sydney. 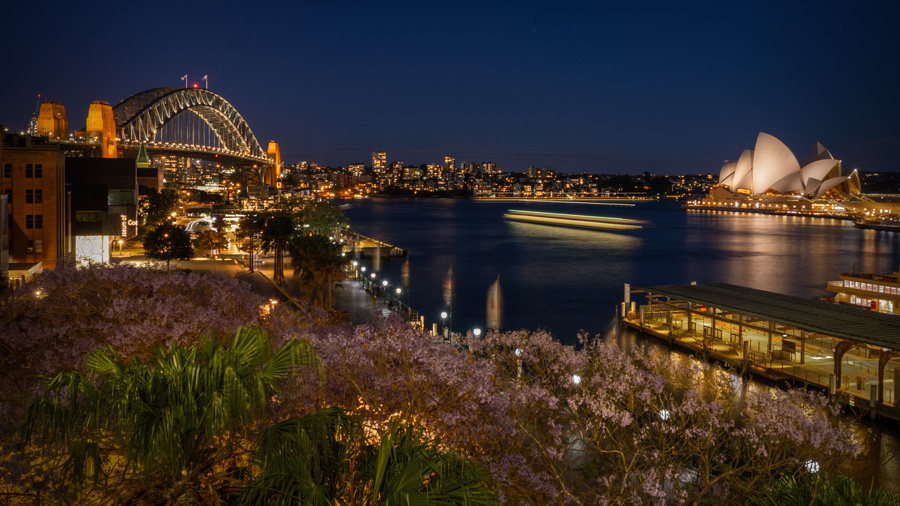 Time to say goodbye to Sydney as the following morning we were flying to New Zealand to begin a two week photography tour.

Carol Omaggio(non-registered)
Hi So sorry it took me so long to view and read your blog. I love them so. much!! I am catching up though, keep them coming!
KIMBERLY C SCHUELER(non-registered)
Great pictures. Ive had to cancel my Australia trip because of family. Maybe next year. Great pictures.
Gwendolyn Rattle(non-registered)
Of course the photographs do your talents great justice. I was interested in the facts about Sydney's Opera House: What an expense!