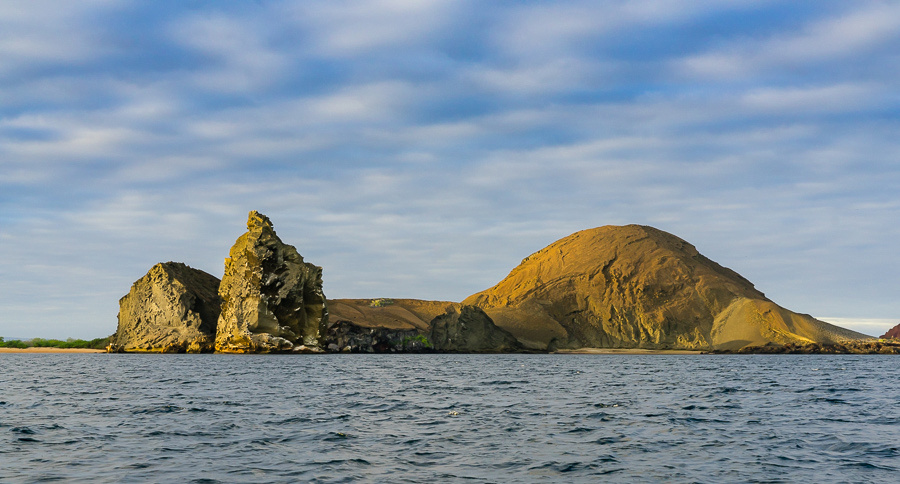 Early in the morning,  we  anchored in  Sullivan's Bay at the easternmost tip of James Island.  Once again, the scenery was very different.  This area has been subject to violent eruptions. 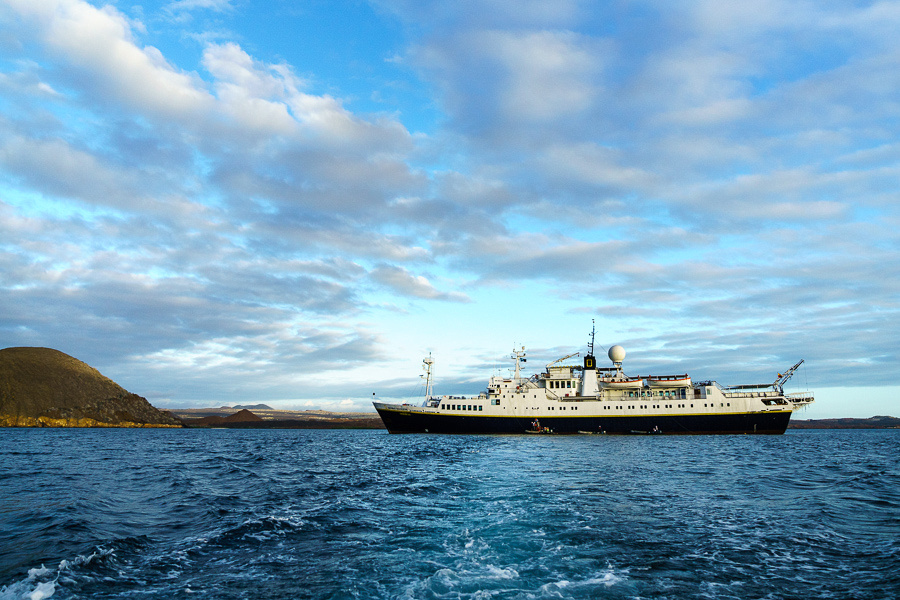 We stopped to hike on Bartolome Island, a volcanic islet in the Galapagos, just off the east coast of Santiago Island.   This island has some of the most beautiful landscapes in the archipelago. 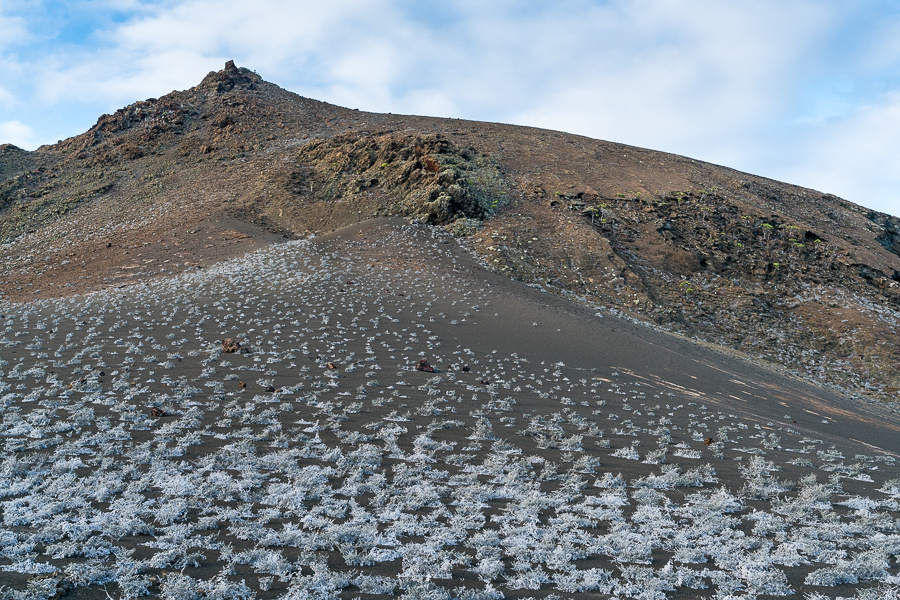 The island consists of an extinct volcano and a variety of red, orange, green and glistening black volcanic formations.  There is very little vegetation on this island but the gray mat plant, evolved to survive long droughts and intense heat.  The tiny white flower it produces are the primary food source for the local lava lizards. 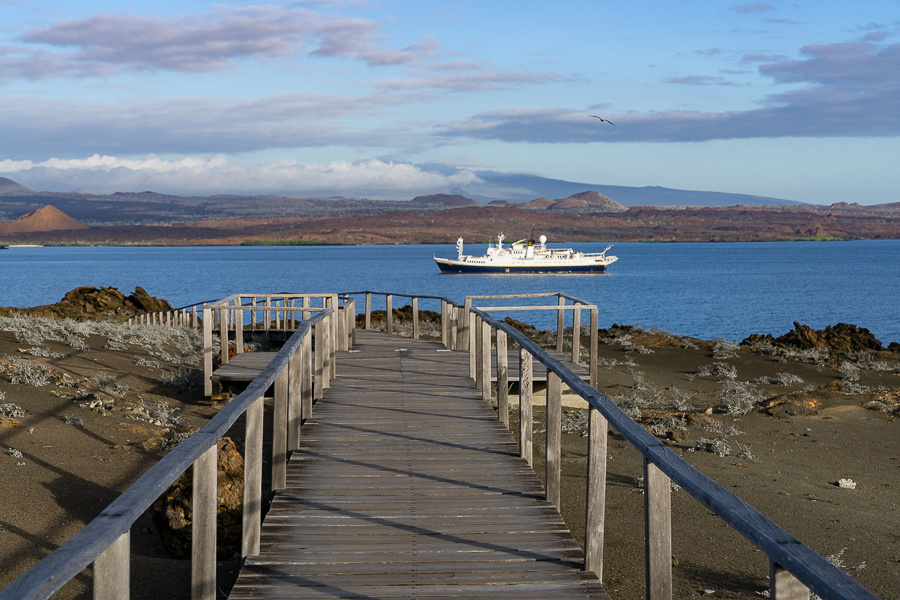 We walked to the top of Bartholomew before breakfast. 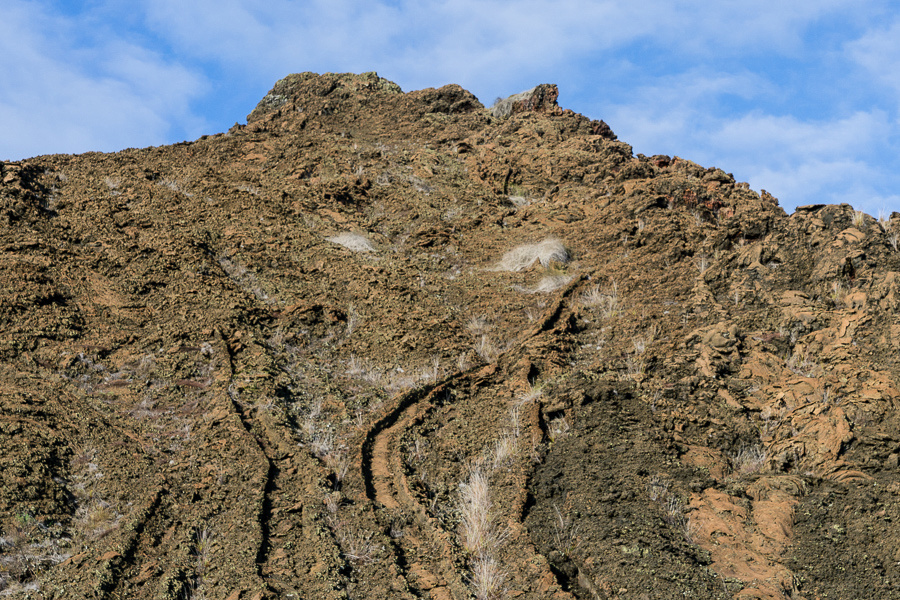 Volcanic features are preserved for a relatively long time in the Galapagos since the climate is fairly stable.  The only true damage to these rocks is a result of the constant exposure to intensive sunlight and occasional heavy rainstorms.  Sunlight and heavy rains do cause erosion, but not as impacting as big storms and heavy seas. 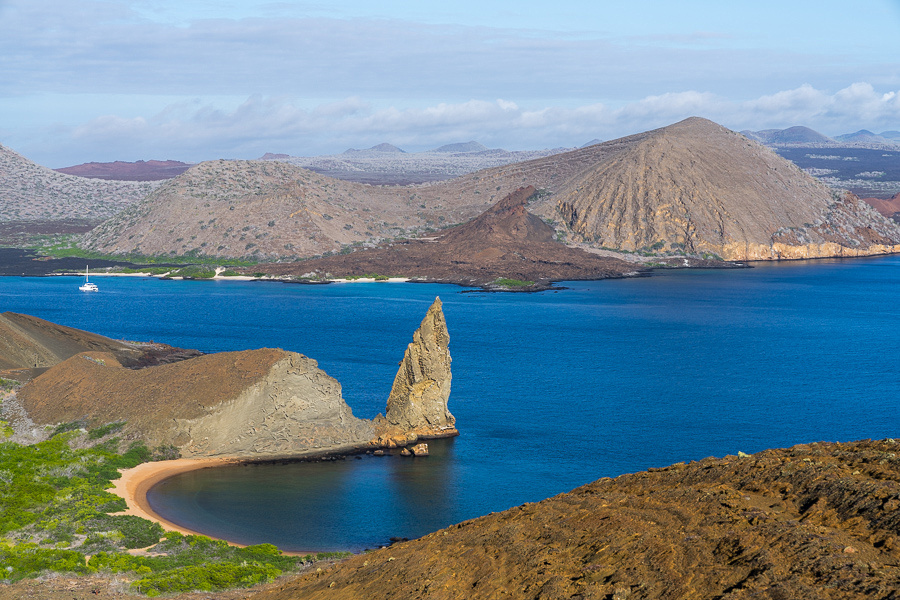 After climbing up several hundred wooden steps, we had a great view of Pinnacle Rock, which is the distinctive characteristic of this island and the most representative landmark of the Galapagos. 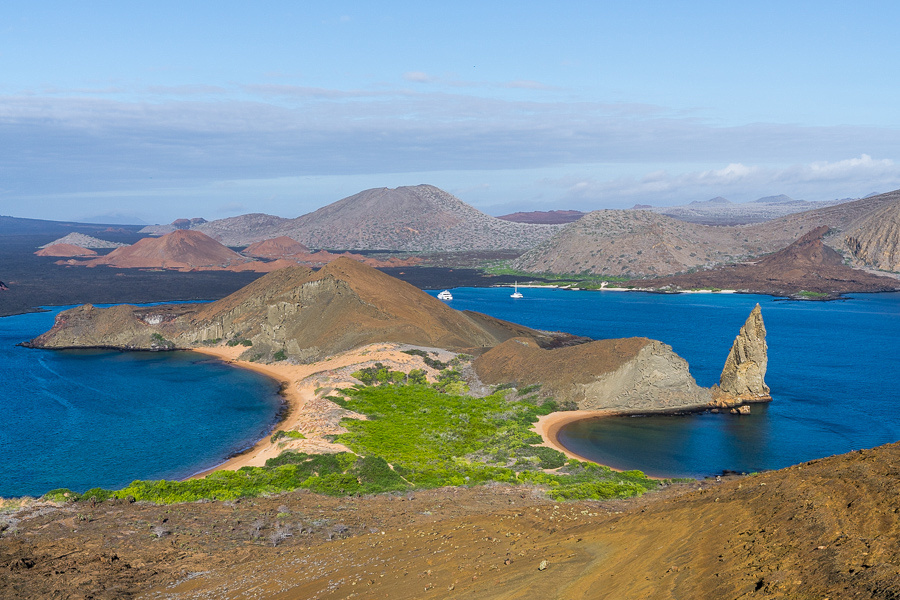 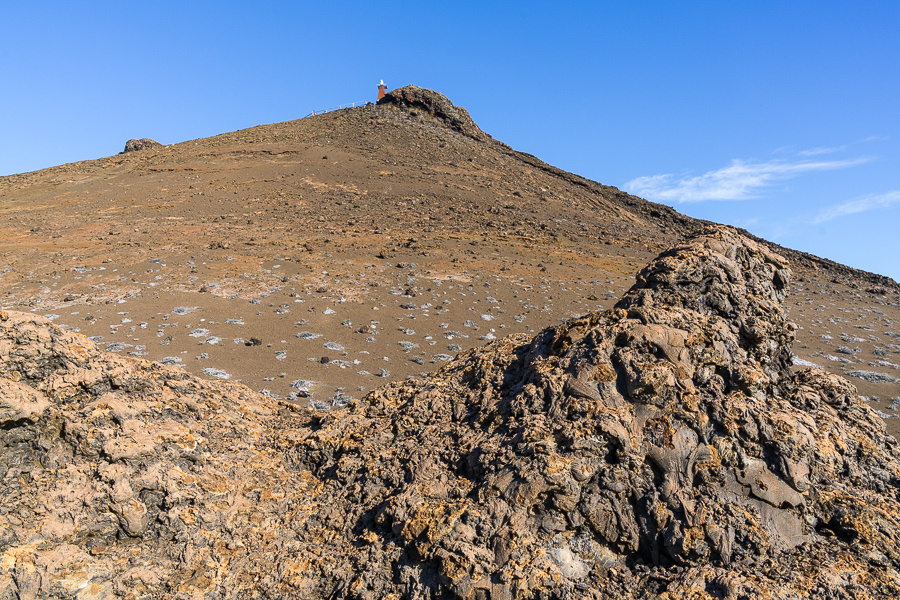 You can just make out the lighthouse at the top.

One of the groups making its way down the wooden steps. 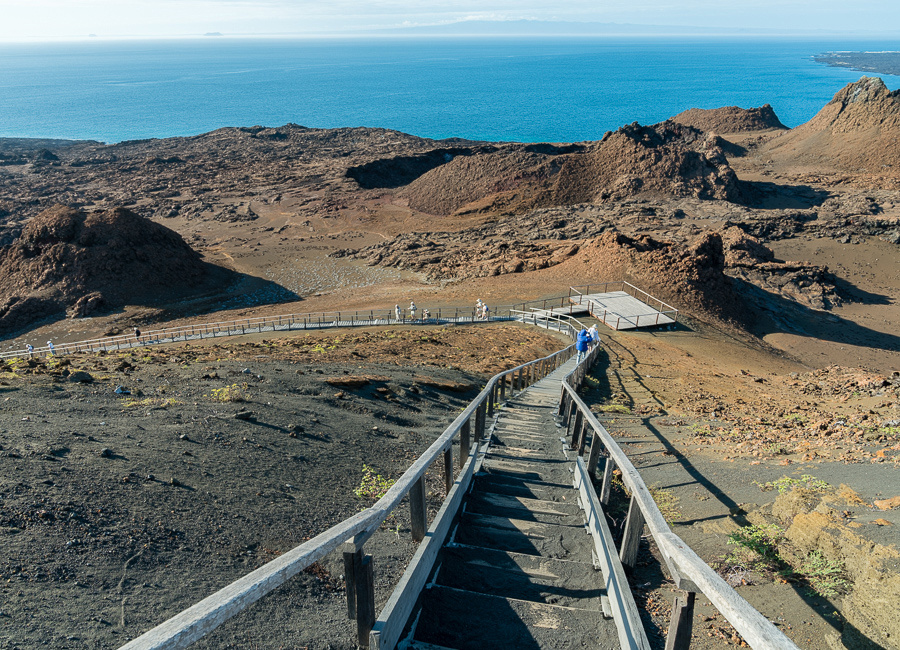 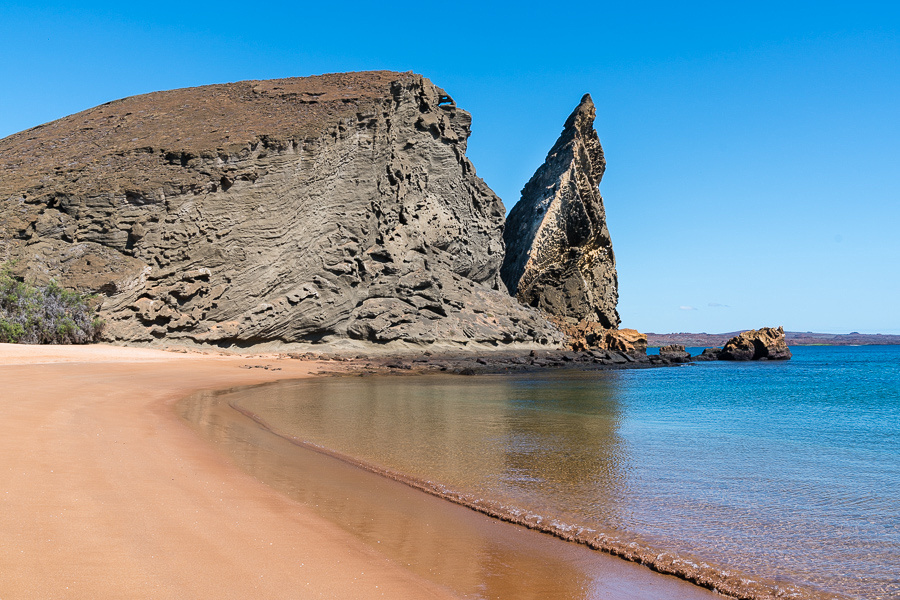 Eventually we checked out Volcano beach before heading back to the ship. 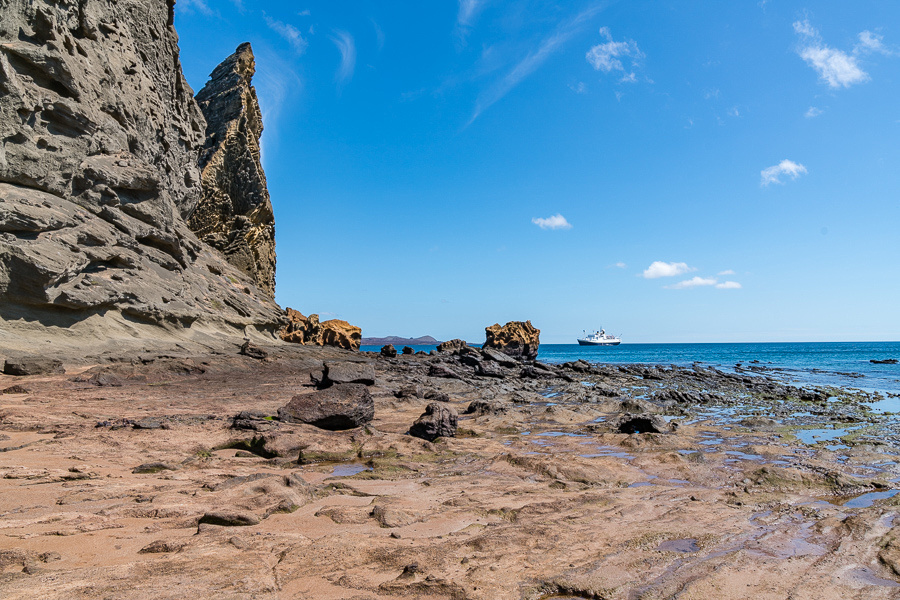 A close up view of Pinnacle Rock.

Manon(non-registered)
I'm certain that "your" pictures of the Pinnacle Rock are a lot better than any postal card! Just beautiful!
Tricia Matheson(non-registered)
So glad I found a moment to look at these magnificent photos. Talk about weird geography! Thanks for posting. Loved the commentary.
Gwendolyn Rattle(non-registered)
I just read all of the above comments and agree with all of them. I enjoy visiting places from your perspective.
BARRY EDWARDS(non-registered)
I find all of your blogs incredibly interesting. The photos are magnificent and from your commentary I am relearning geographical terms and processes that I have long since forgotten about.
Maureen(non-registered)
I've just loved your blog of the Galapagos with the variety of landscape and all the native animals and this is no exception. This one is so different from the others and so beautiful. Thank you for sharing.
No comments posted.
Loading...
Subscribe
RSS
Recent Posts
Melbourne Last blog of New Zealand Fox Glacier Haast Wanaka Queenstown and Glenorchy Moeraki Boulders and Milford Sound Penguins, Seals and Sheep Southern Alps, New Zealand Last evening in Chania
Keywords
Croatia Crete Morocco New Zealand South Island Cuba alberta National Park galapagos
Archive
January February March April May June July August September October November December
© Marsha Fouks