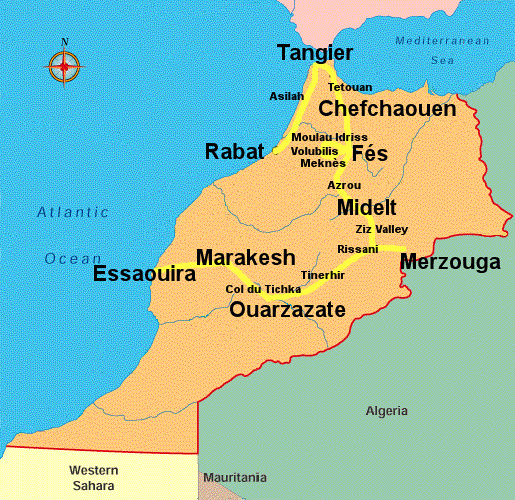 We left Fez and headed towards Chefchaouen (see top of the map of Morocco, about 2/3rds to the right).  We headed eastwards driving through green mountains covered with trees until we reached  the blue city of Chefchaouen. 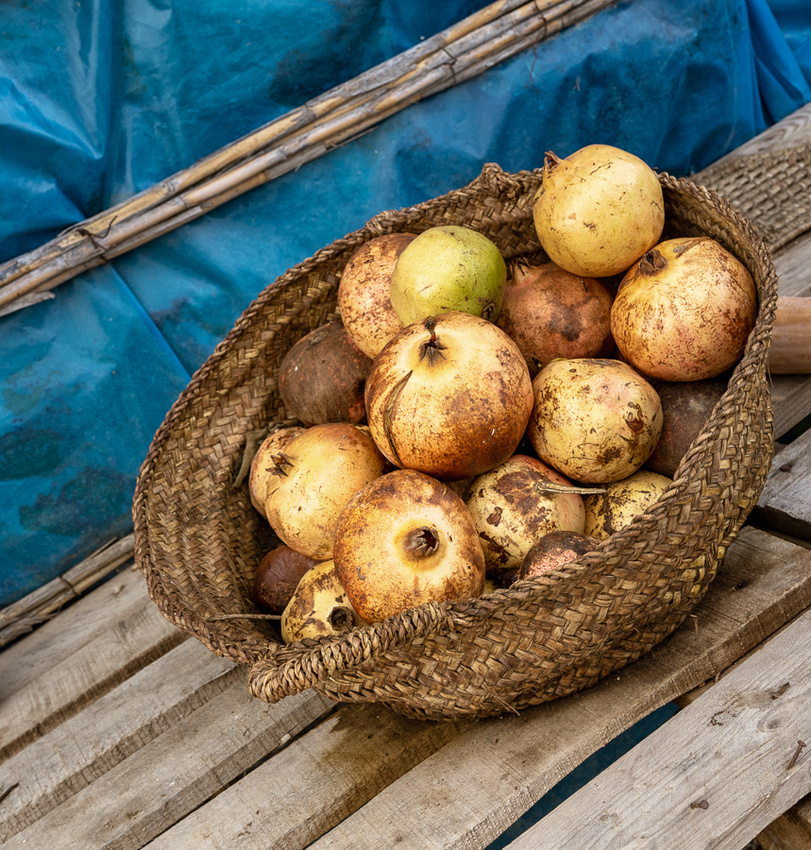 On our way we stopped at a roadside market. 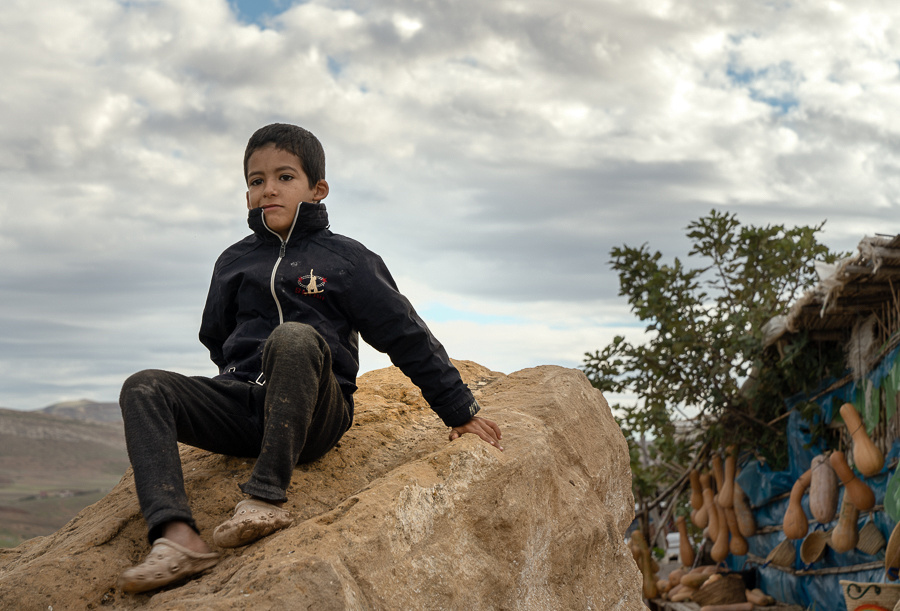 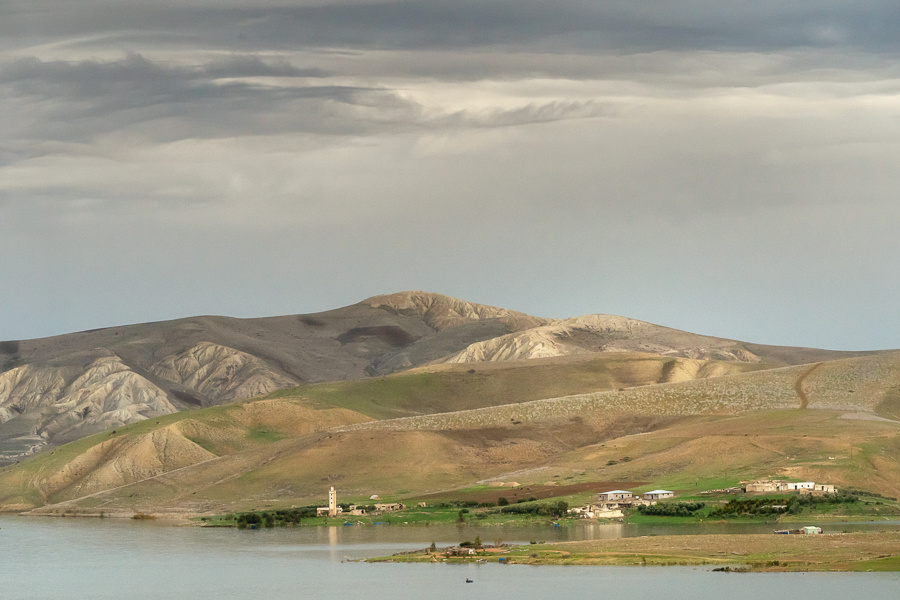 A view overlooking the lake. 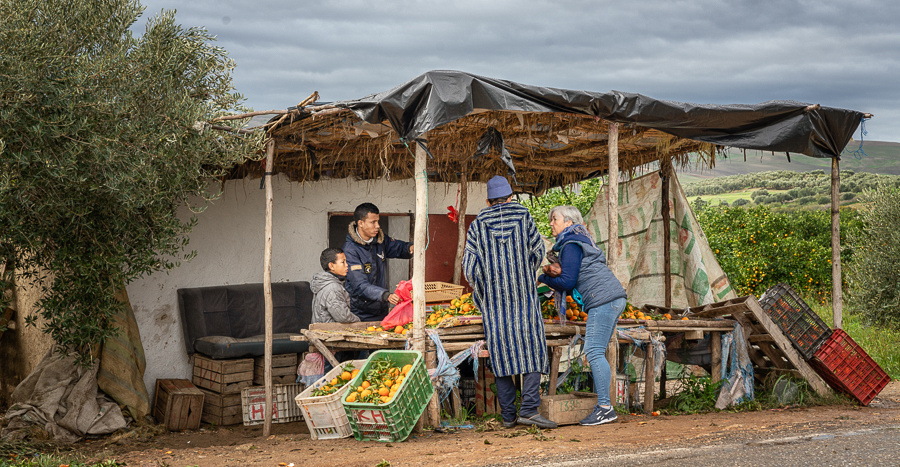 We stopped at a fruit stand where Rosa picked up some fruit for our group. 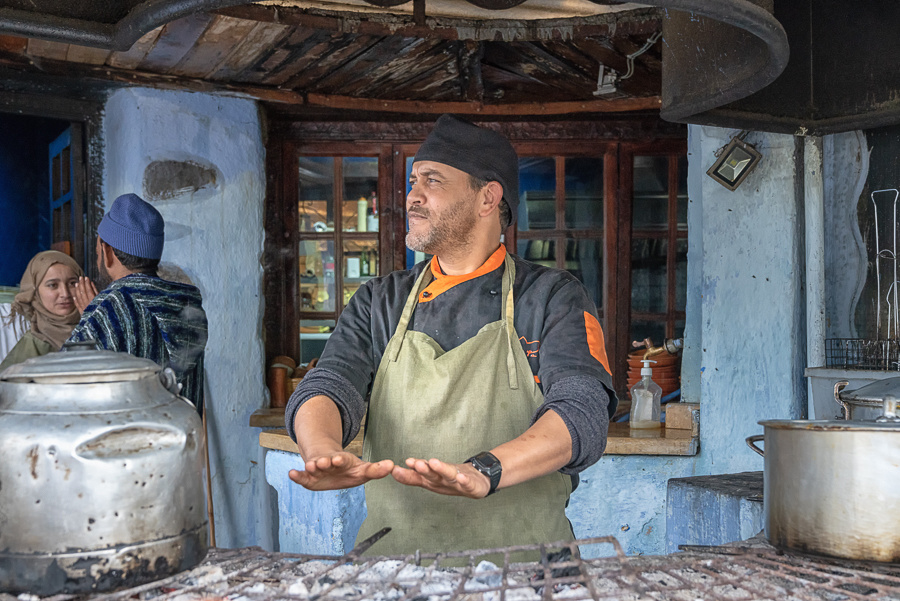 We stopped just outside the city for lunch.  It was actually a fairly cool, cloudy day.  The chef  was keeping his hands warm (or perhaps waiting until the grill was hot enough for his cooking).  Given the weather, I'll go with the former. 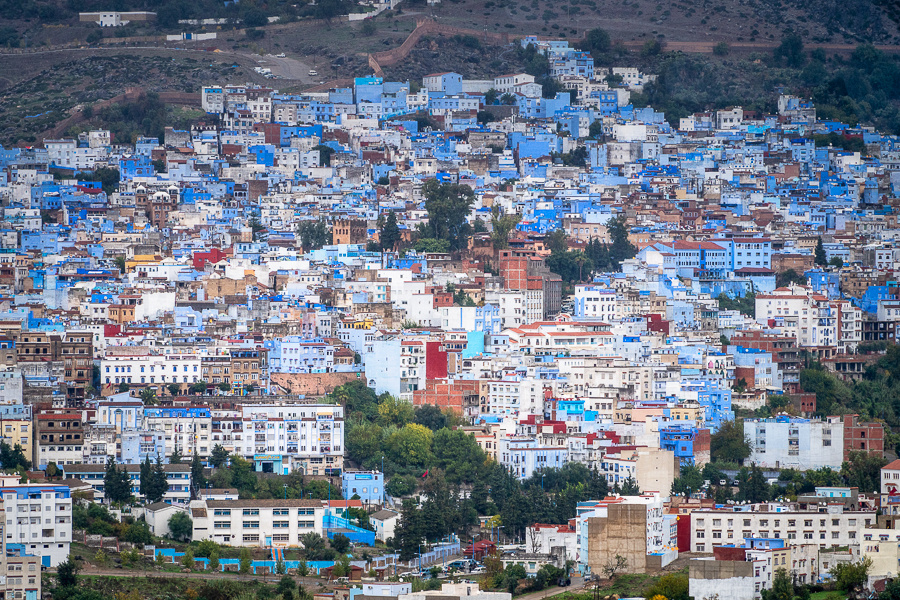 Just before entering the Blue City, we stopped at an outlook for a view of the city.  You can see why they call it the "blue city". 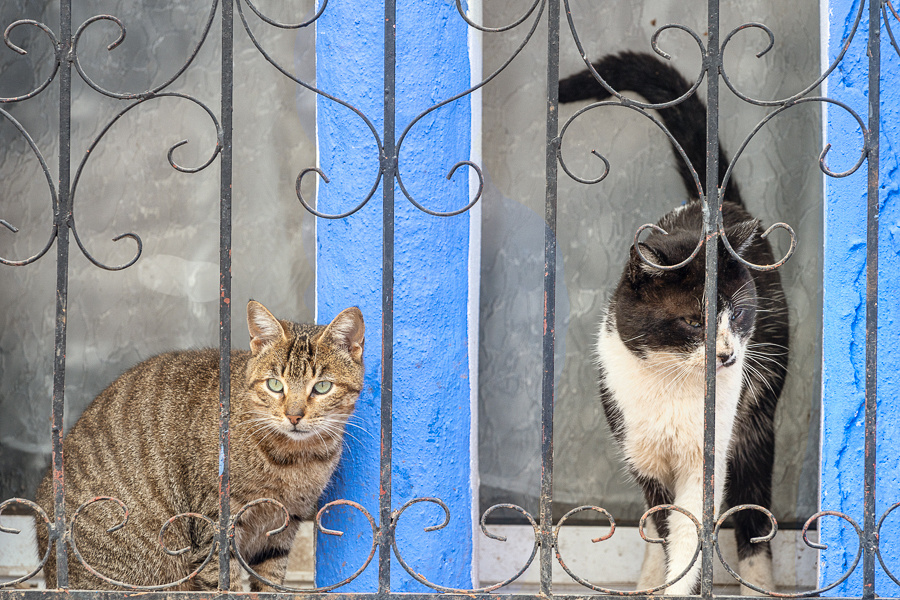 We had to leave the vehicles behind and walk to our hotel (fortunately without worrying about taking our luggage) as the streets were too narrow for cars.  I grabbed a shot of these cats.  I didn't realize at the time that I would see  so many cats everywhere we went. 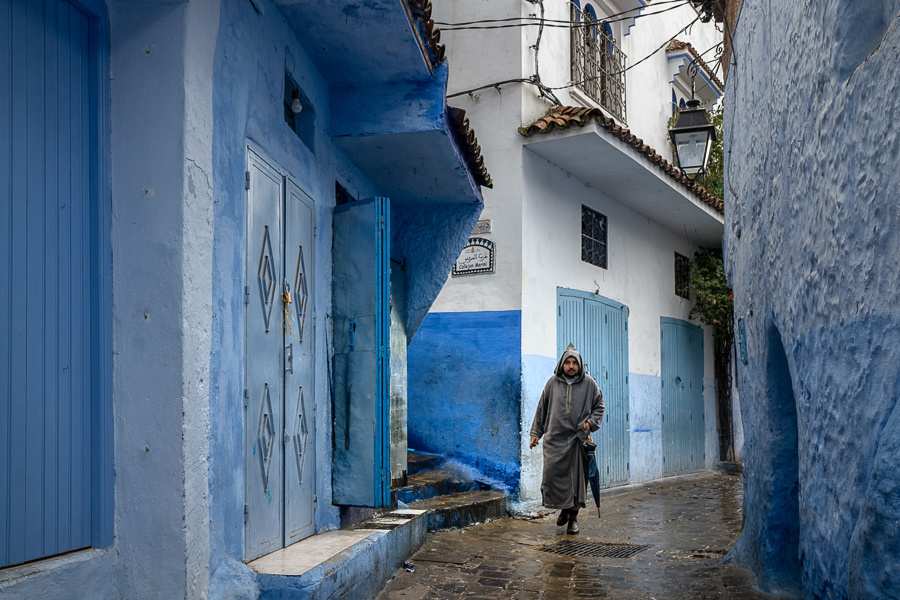 We wasted no time in exploring the city known for its buildings in shades of blue.  The city was originally founded to fight the Portuguese invasions of Morocco.  Along with the Ghomara tribes of the region, many Moriscos and Jews settled here after the Spanish Reconquista in medieval times.   In 1920, the Spanish seized Chefchaouen to form part of Spanish Morocco.  Spain returned the city after the independence of Morocco in 1956. 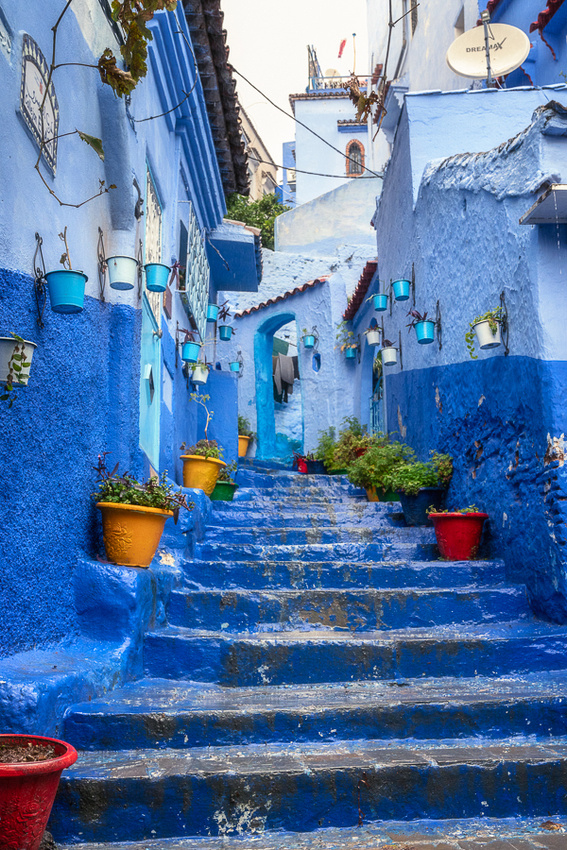 There are several theories as to why the walls were painted blue in the old city.  One popular theory that I heard was that Jews introduced the blue when they took refuge from Hitler in the 1930's.  The blue is said to symbolize the sky and heaven and serves as a reminder to lead a spiritual life and to be closer to God.   However, according to some locals, the walls were mandated to be painted blue to attract tourists at some point in the 1970's.  Whatever the reason, the blue color made the town seem even more picturesque. 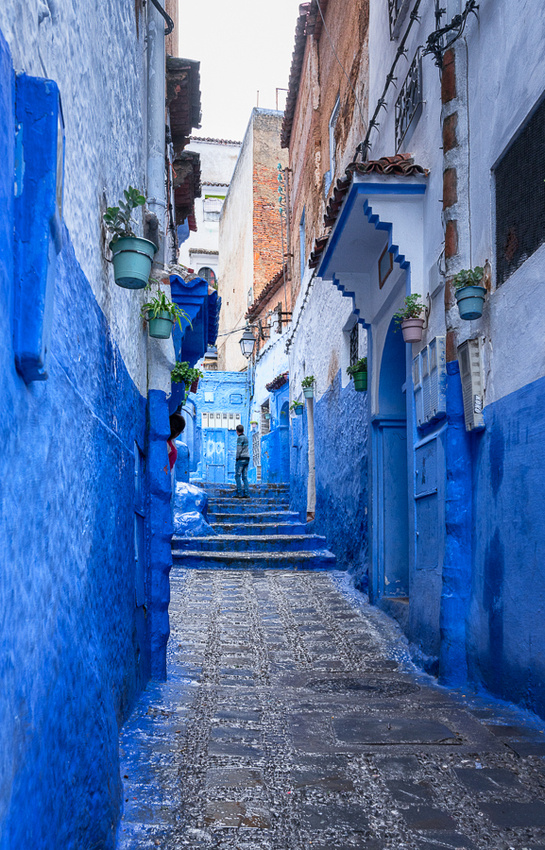 It was such an interesting place to wander around.  The countryside around the town has a reputation for being a prolific source of Kief  and the region is one of the main producers of cannabis in Morocco.  Apparently tourism in this city  is driven by its reputation as the center of the marijuana plantations region in North Morocco as well as its proximity to Tangier.    I would have thought it was a huge tourism center because of its brightly painted Medina (old town) and its native handicrafts which you cannot find in other places.      During the summer approximately 200 hotels cater to the influx of European tourists. 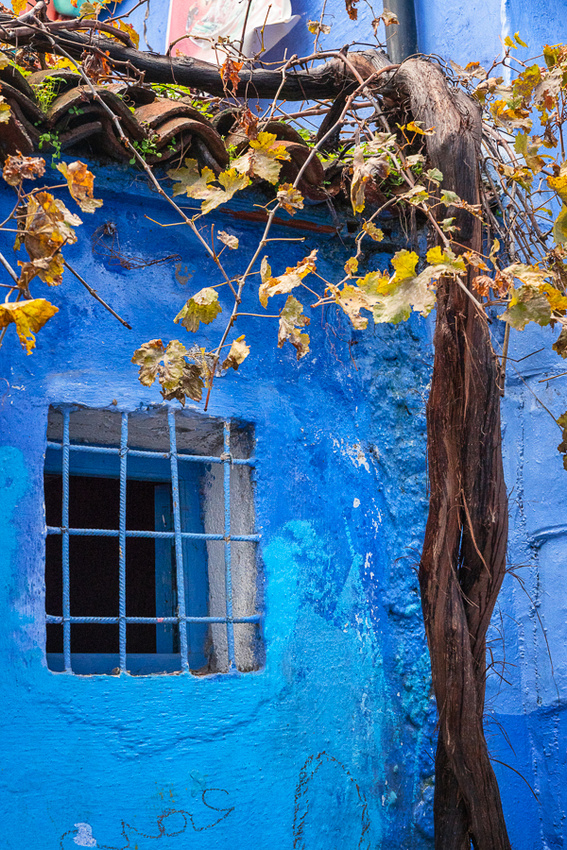 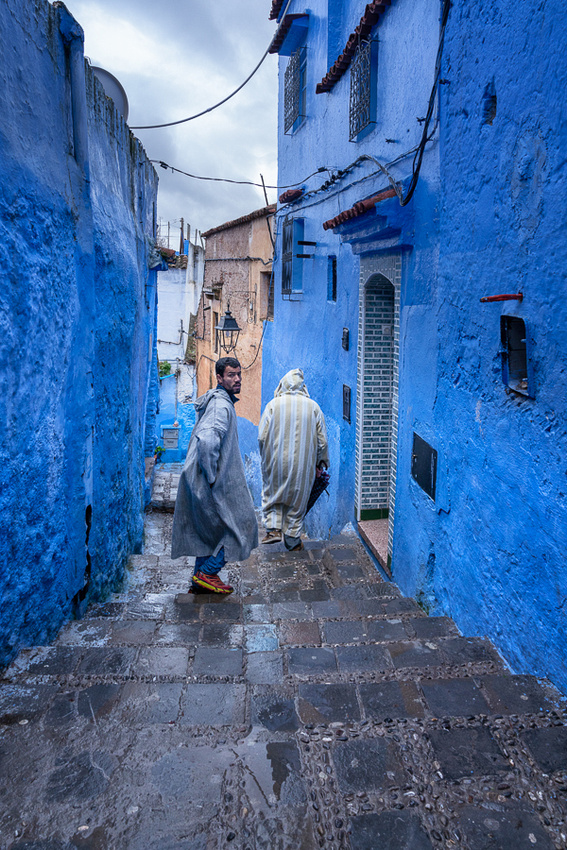 As I was photographing the street, this man turned around.  I don't think he was too happy to have his photograph taken.  I'm pretty sure that the locals get very tired of having their photographs taken.  Morocco is not a photography-friendly county at all. 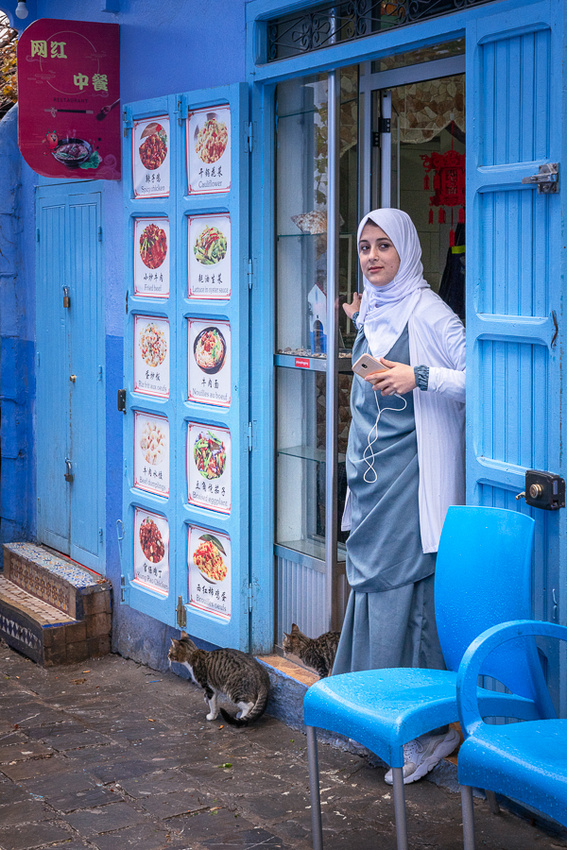 Did I mention that there were cats everywhere? 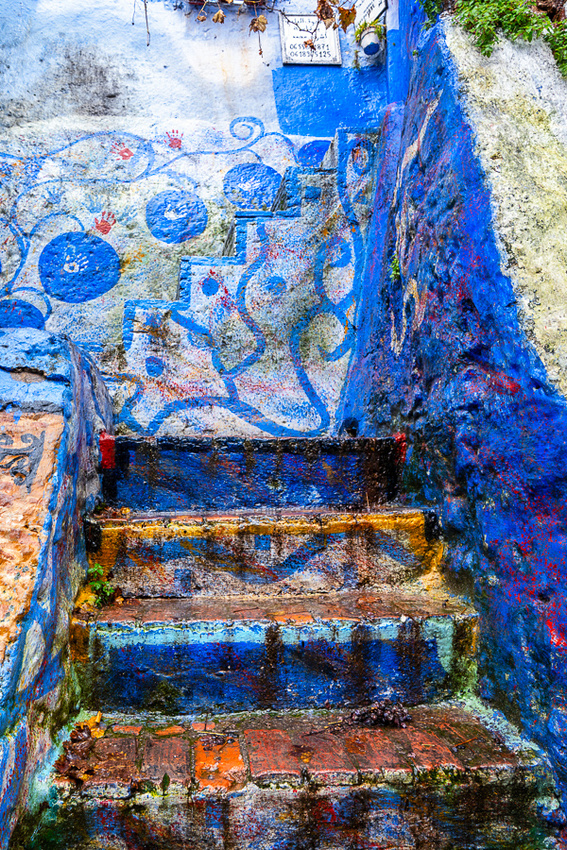 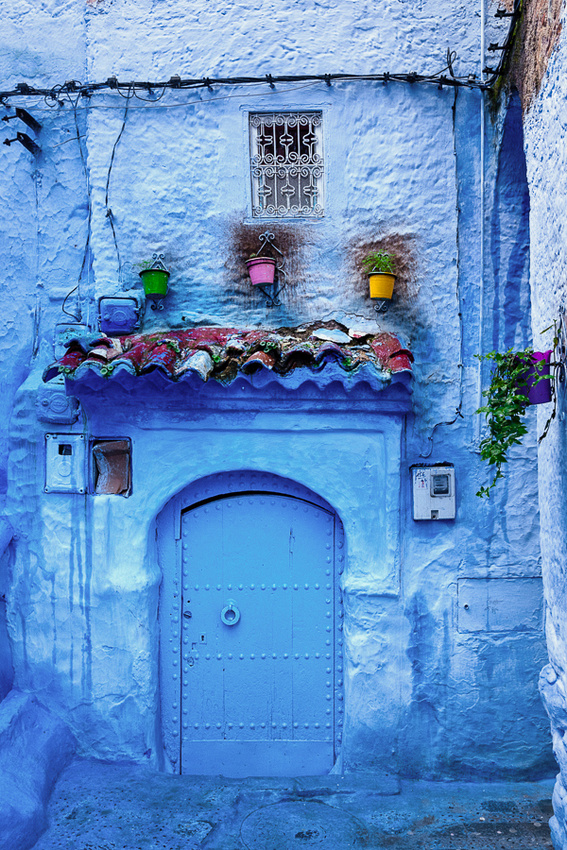 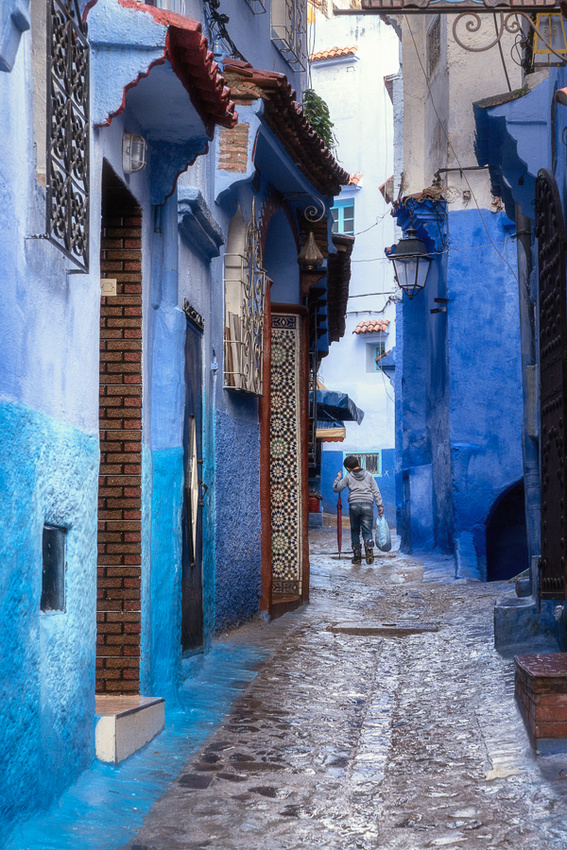 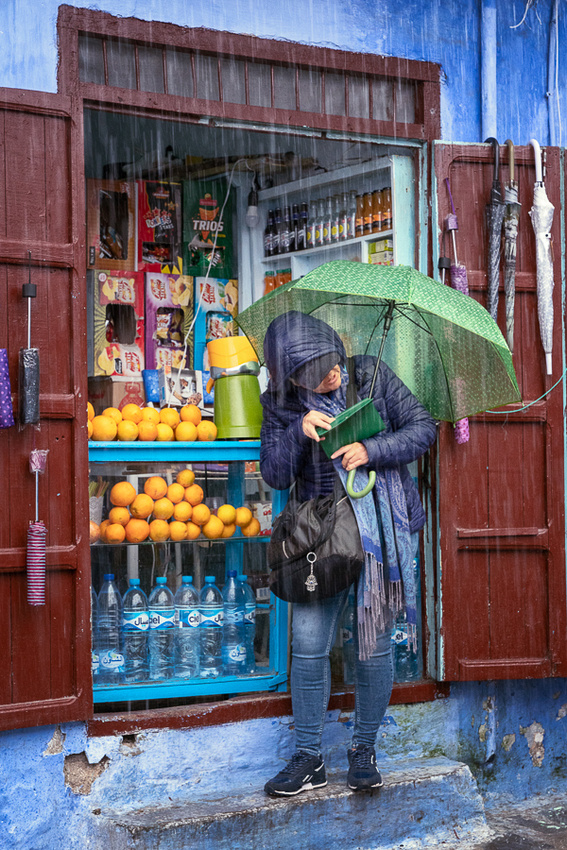 Oh-oh, more rain.  Rosa stopped to buy an umbrella while the rest of us tried to find some shelter until the rain stopped. 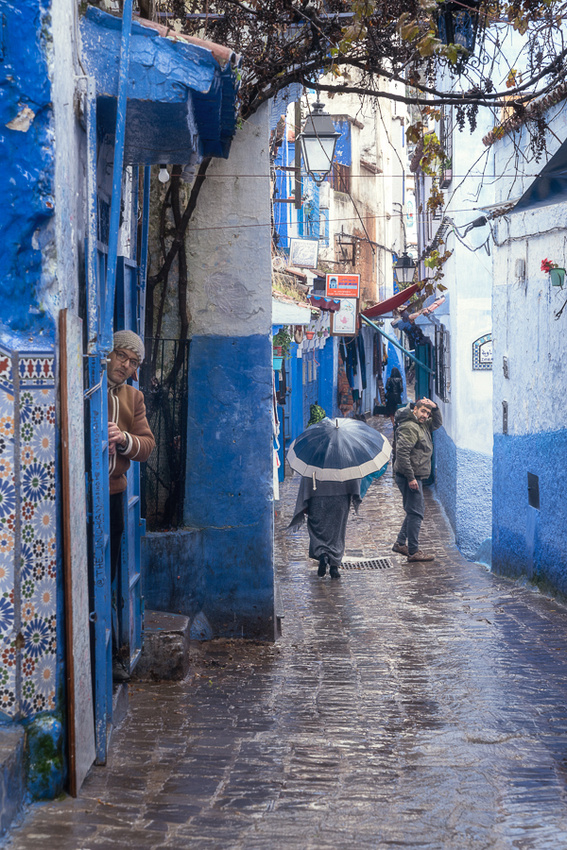 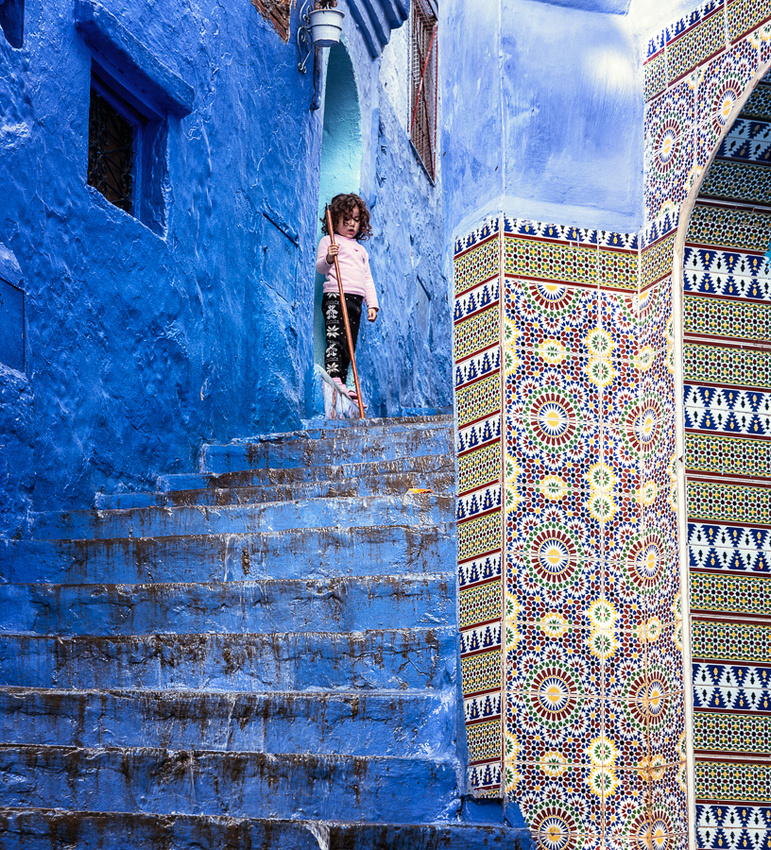 Fortunately the rain didn't last for long.  This little girl was helping to sweep the steps. 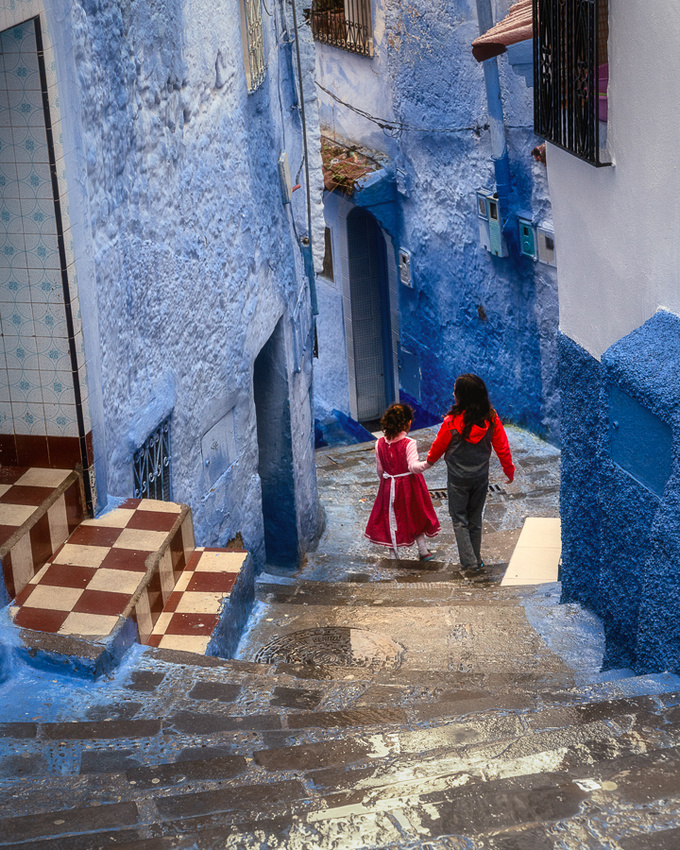 I saw these girls wandering around in the old city quite a bit- they were always holding hands. 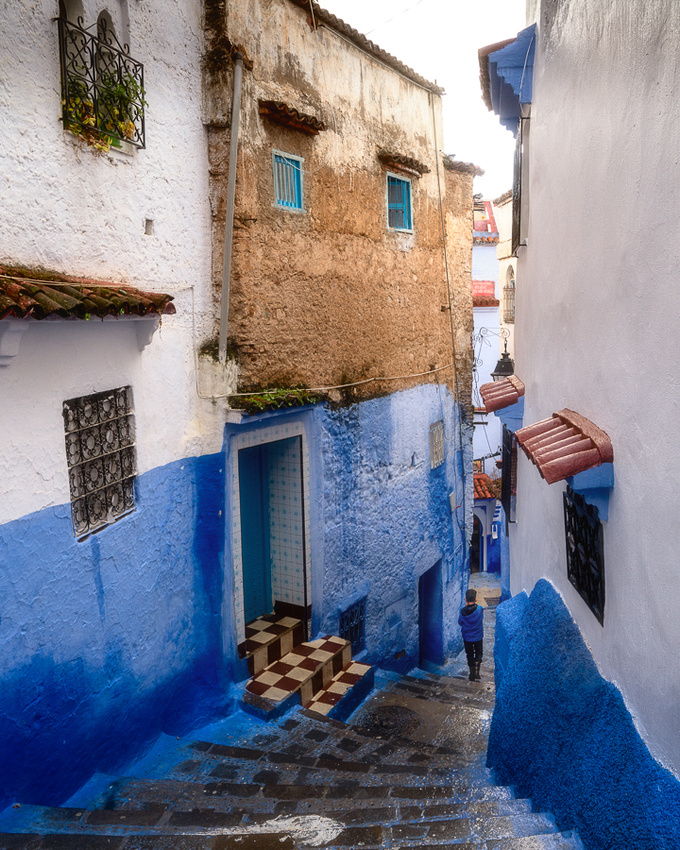 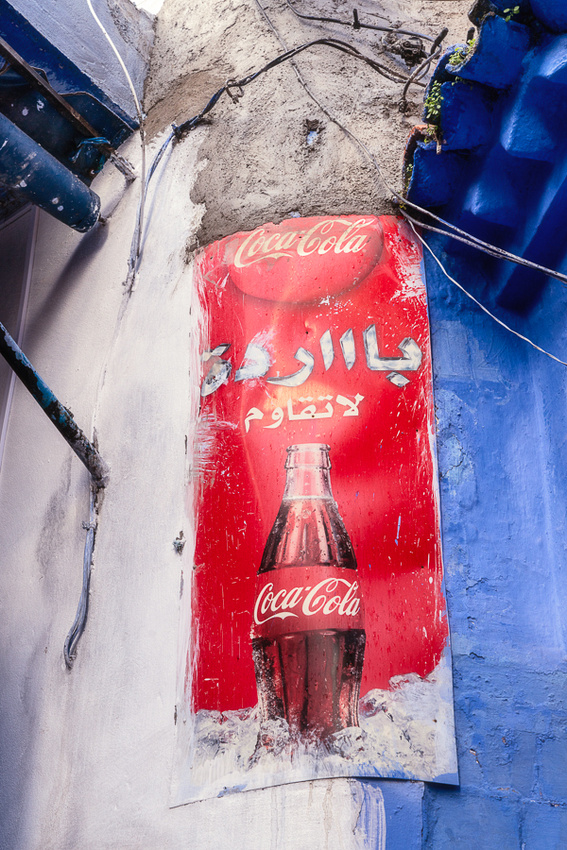 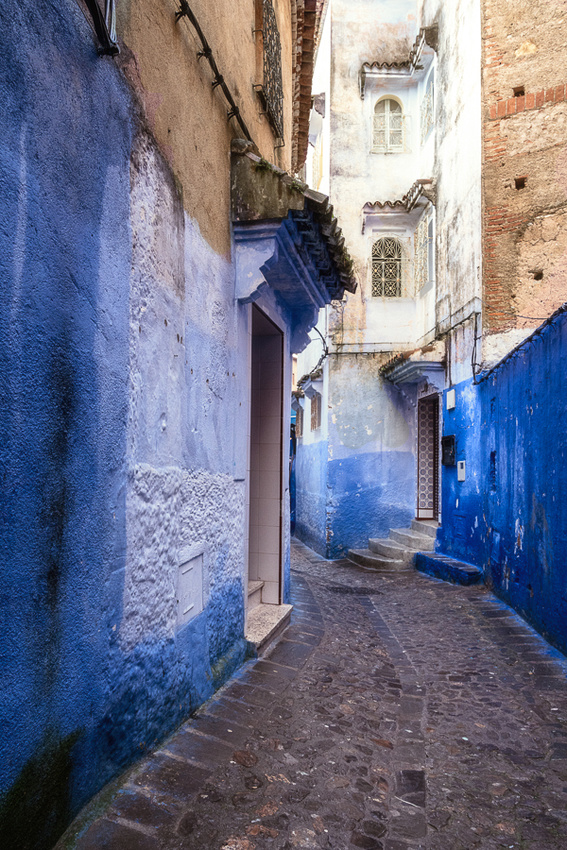 November is a great time to visit Morocco as the streets are not crowded with tourists and the weather is not hot, even in the Sahara. 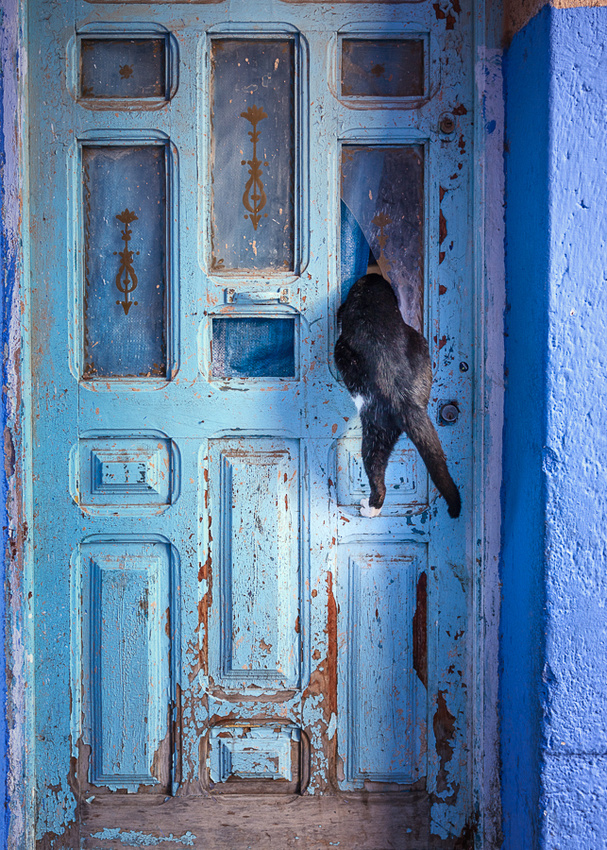 Here is one trying to get into the house.  Next blog will feature another day in this beautiful city.

Elizabeth kidd(non-registered)
Hi Marsha, This was the first of your blogs that i looked at because we did this trip few years ago. WOW! What a fantastic photographer you are!!! The shots are stunning, creative, original, captivating and colours so vibrant. What camera do you use? How much editing do you usually do? I look forward to looking at many more of your blogs.
James Robb(non-registered)
Your photographs seem to enhance the colours...mainly blue in this group of photos. I'm wondering if you increase the contrast to achieve this effect. As for the subject matter, wow these people must be very agile. I could not see one railing to assist climbing or descending stair cases. Beautiful photography Marsha...capturing and sharing...love it!
Bill Porter(non-registered)
Well done as usual. I am surprised the cats are not blue.
weter(non-registered)
Qué maravilla de pueblecito y tan bien expresado en un inigualable ramillete de fotografía. Gracias por acercarnos a tan idilico lugar.