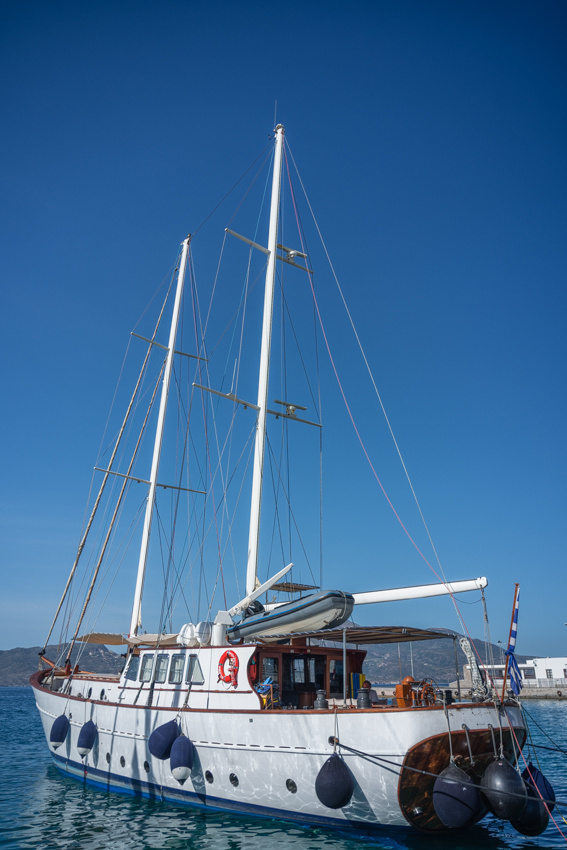 We spent a day sailing around the island on the Odysseus A, a 23.8m long schooner.  The ship easily fit 40 people or so but we only had about 25 people including the crew.

This gentleman was a real character.  He told us he was the captain of the boat and we believed him!  He sure looked like he could have been.

We never actually figured out what he did but painting and construction work was a good guess. 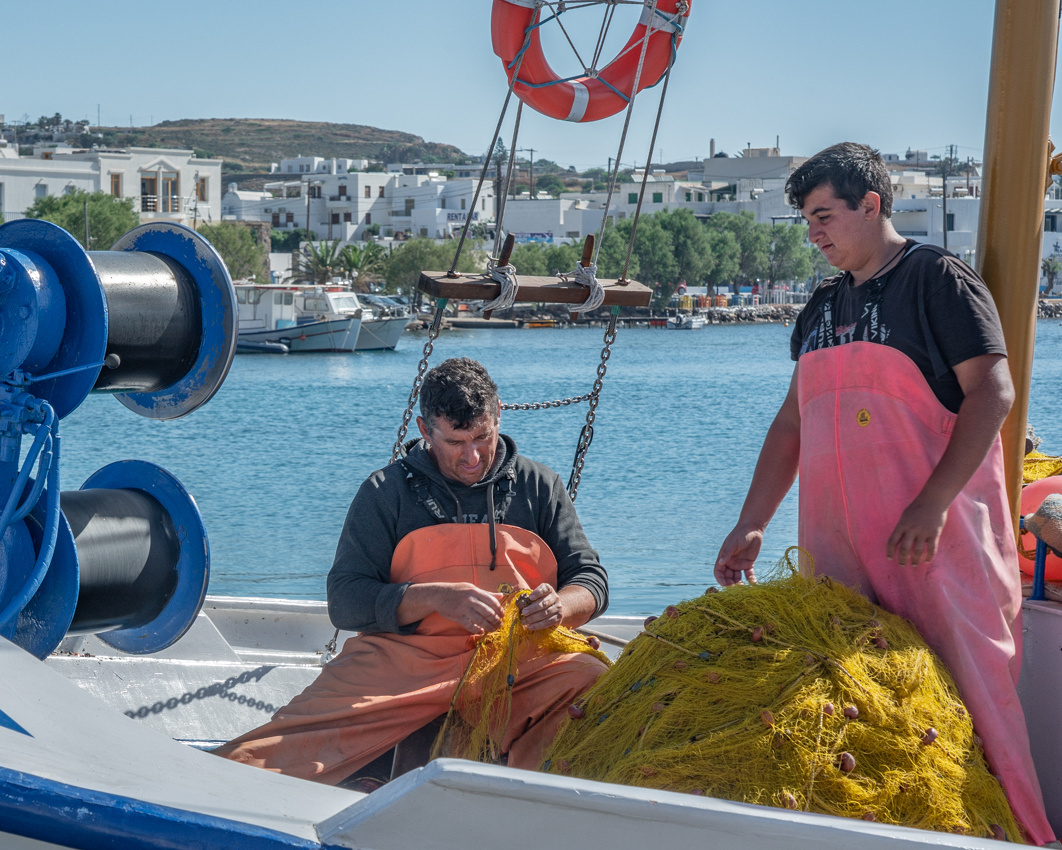 The cruise took off late because of some damage from the night before.  I seemed to remember something about another boat getting too close to the yacht  and the resulting  wake did some minor damage to the gangplank.   So while waiting we walked around the port of Adamas, which is the main port on the island of Milos.  We ended up being in Adamas a few times- this is where our ferry arrived and where we ate a few meals.  As the largest village on the island, there were a lot of restaurants and hotels. 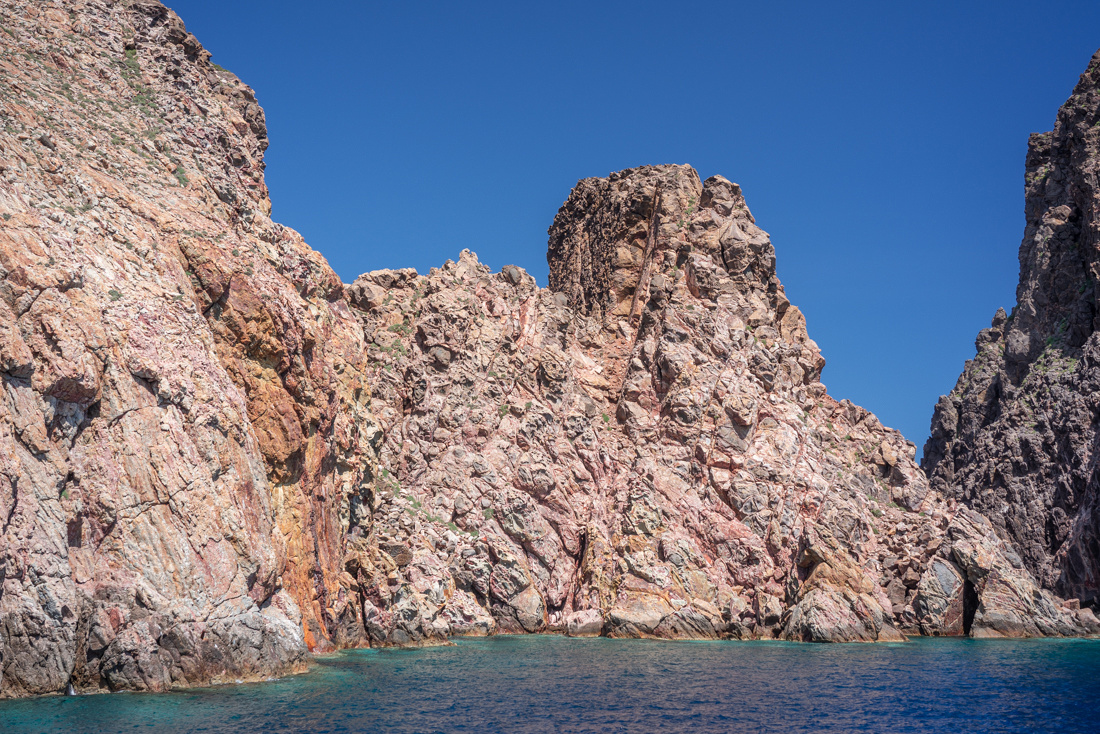 The scenery was pretty spectacular and the day started off warm and sunny. 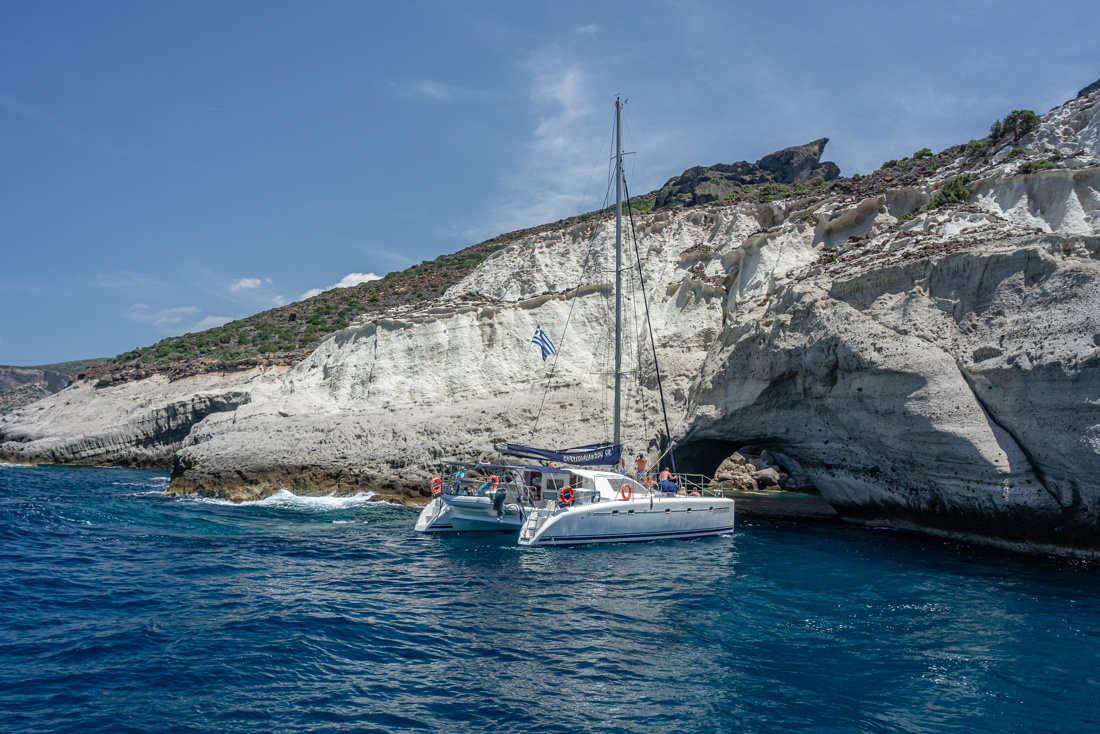 We spent the next several hours cruising around the island.  Unfortunately, it was not windy enough to sail so boats' engines were used.  On the boat, we took photographs, relaxed, visited with people from all over and had a delicious buffet lunch. 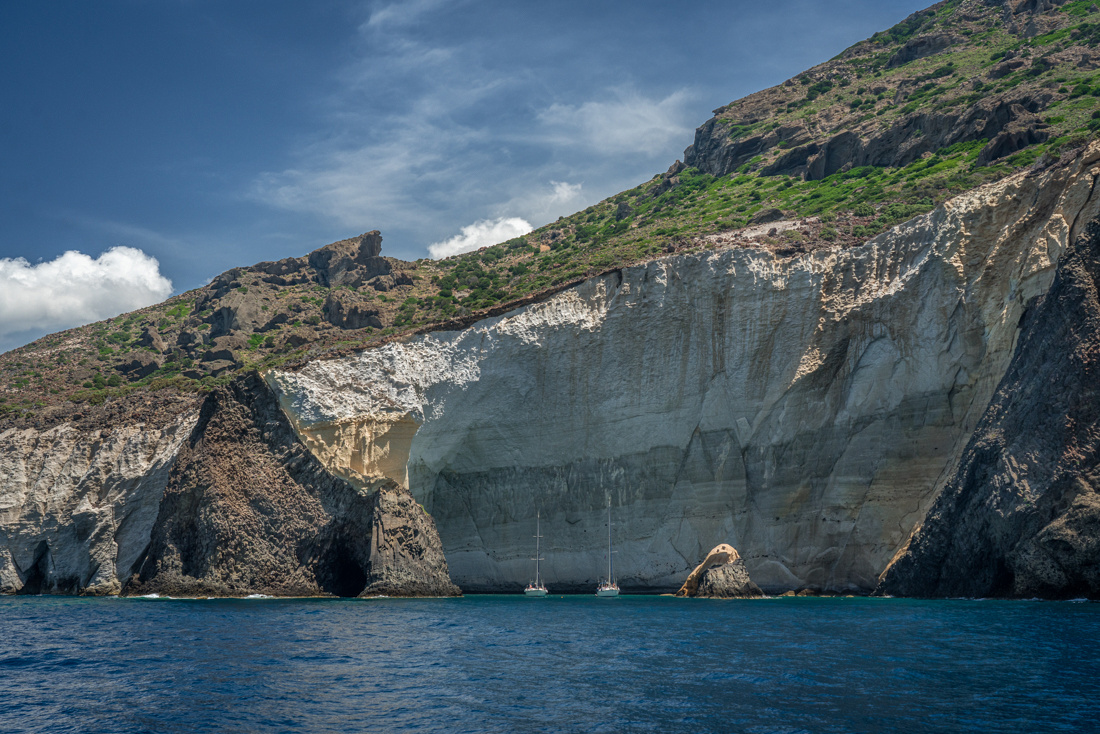 At times we sailed pretty close to the cliffs so we could get a great view of the geology of the area.  One of the crewman gave a commentary about what we were seeing which was very interesting.  There were some other boats in the area that we came across.

During the cruise, there were at least four stops where people could go swimming and snorkelling.  Apparently the water was cool but quite refreshing. 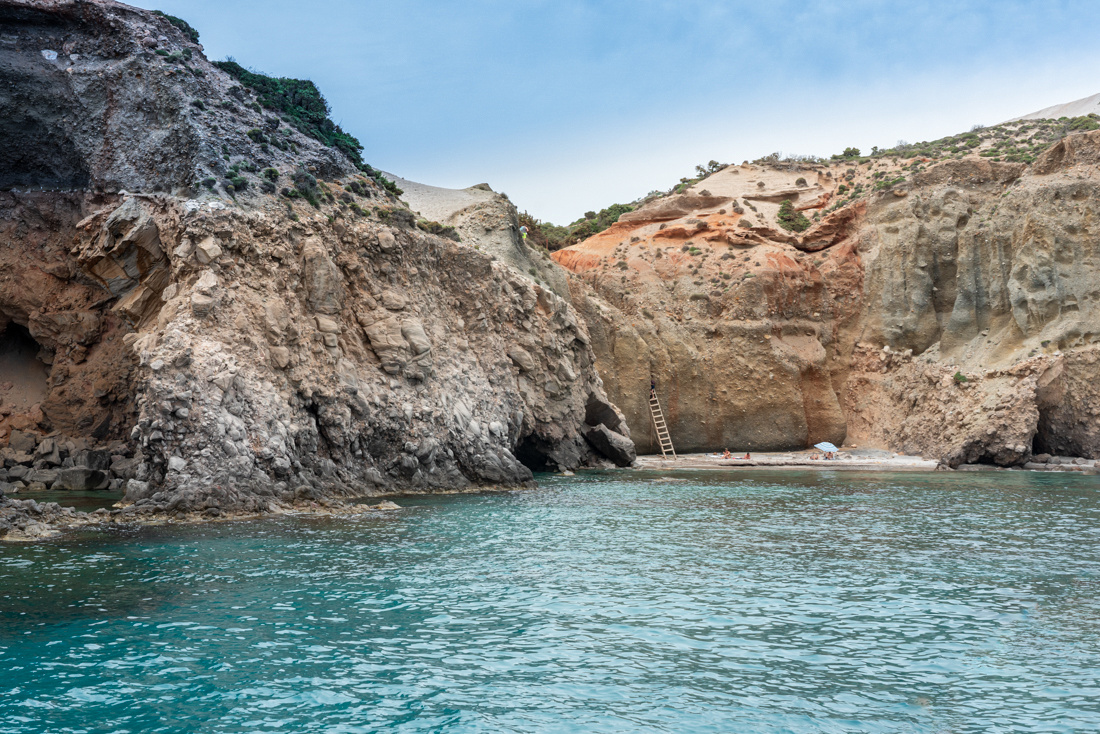 Here we sailed by a small, hidden beach used by locals.   I'm not sure I would have wanted to be climbing up and down the ladder. 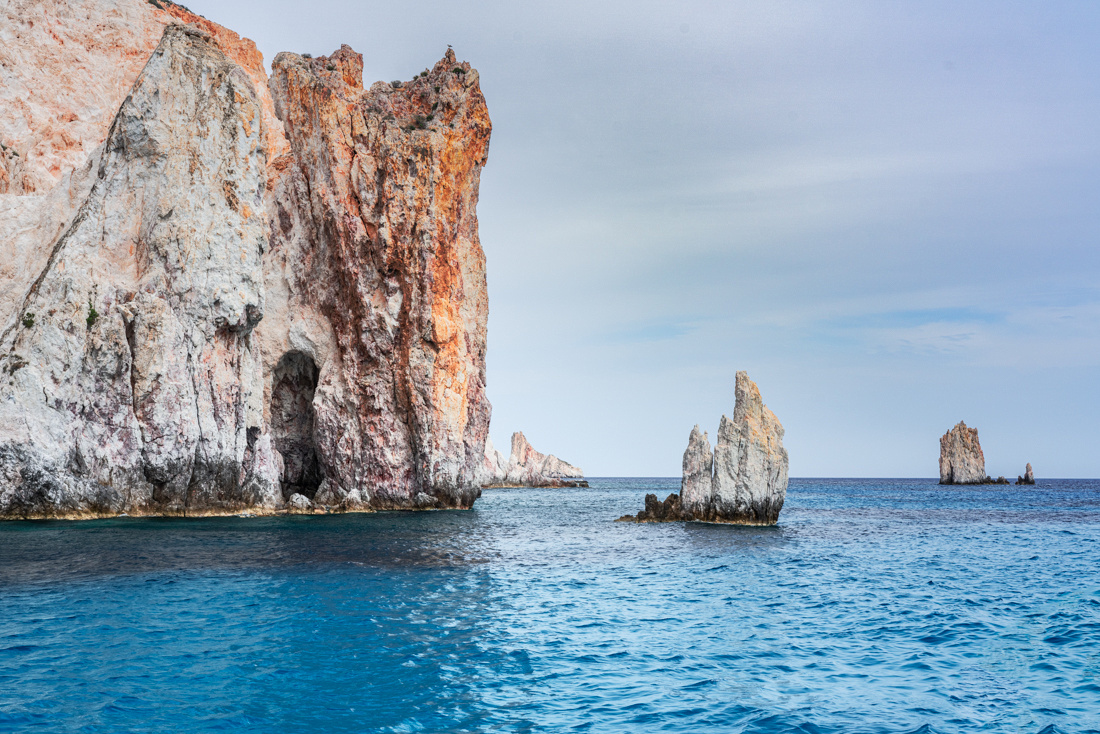 We came across some really neat rocks.  The one in the middle reminded me of a sail boat.  There were sea caves all over the island.  Many of the rocks were used by pirates for shelter.  The colours of the rocks comes from the rich mineral deposits.

I took this close up photo of these basalt formations which I found very interesting.  More than 90% of all volcanic rock on earth is basalt.  Basalt lava has a low viscosity (because of its low silica content) so this results in rapid lava flows that spread over vast areas before cooling and solidifying.  So the result are the formations above. 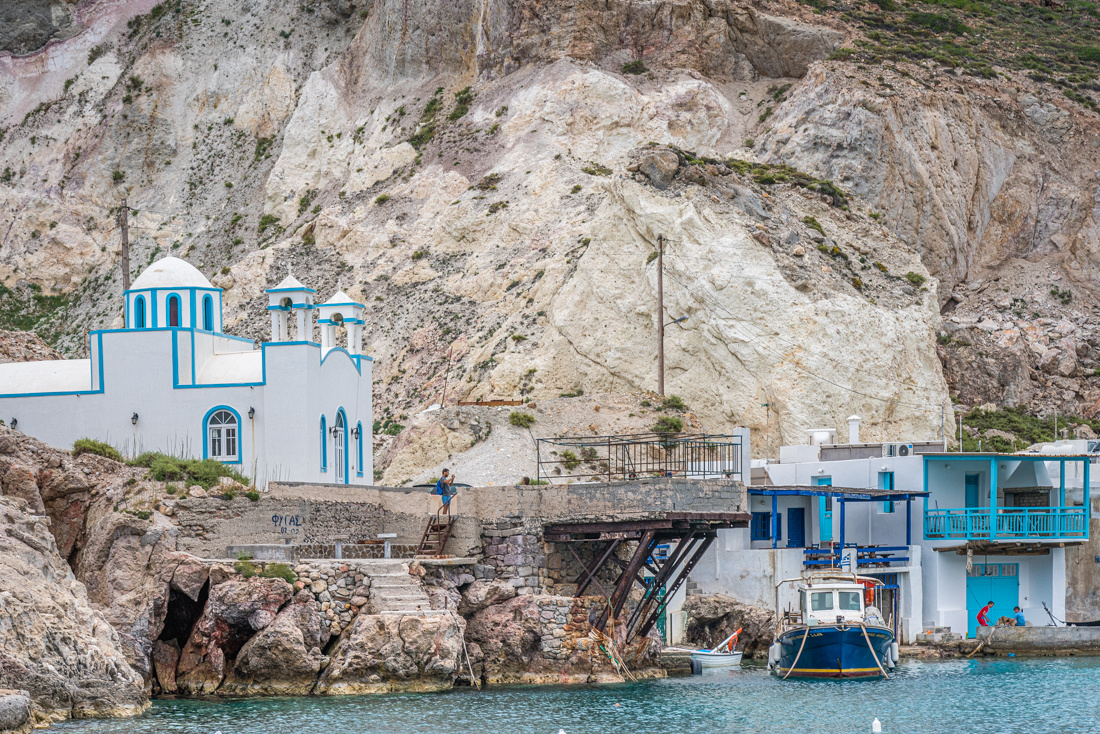 We sailed past the fishing village of Fourkovouni where we would end up seeing the next day. 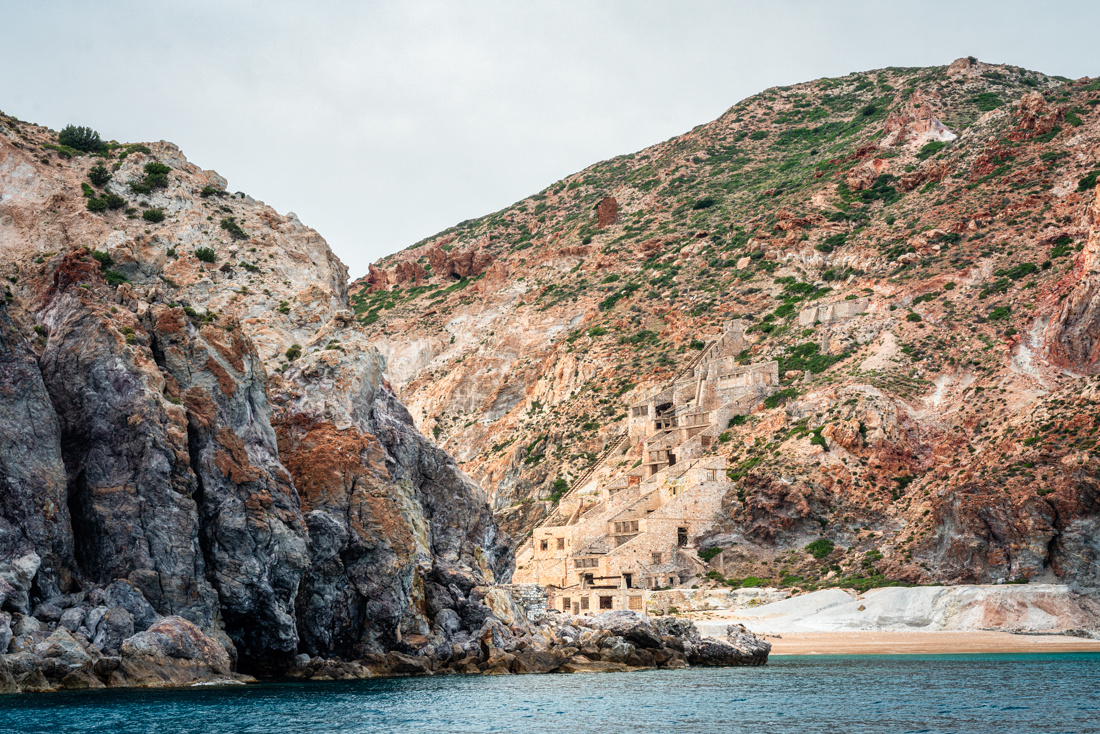 We passed by an old mining operation.  Milos has often been overlooked in the past as  as an industrial island and not a tourist attraction.    The natural resources have been profitable since the ancient Greeks dug for obsidian which is a black mineral.  Obsidian is hard, brittle and amorphous.    In the past it was used to manufacture tools and has been used experimentally as surgical scalpel blades.   Today Milos has silver, bauxite and kaolin mines and the world's second largest mine for bentonite which is used in cement.  The tourist have also come but compared to Santorini, the island was very quiet. 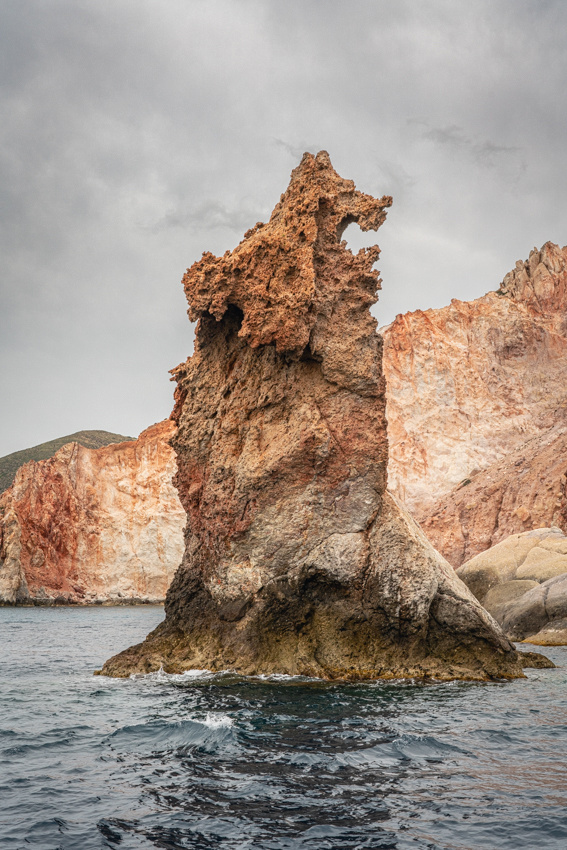 Towards the end of the day, the clouds started to roll in and it cooled down quite a bit.  Many people ended up inside trying to warm up.   In the meantime we sailed by The Arkoudes.  These are a group of rocky islets.  The rock above appears to show an opening mouth, a nose, eyes, ears and a body that looks like a bear.  Therefore, it is called bear rock.  The rock is about 20 feet high and the only way to see them is by boat. 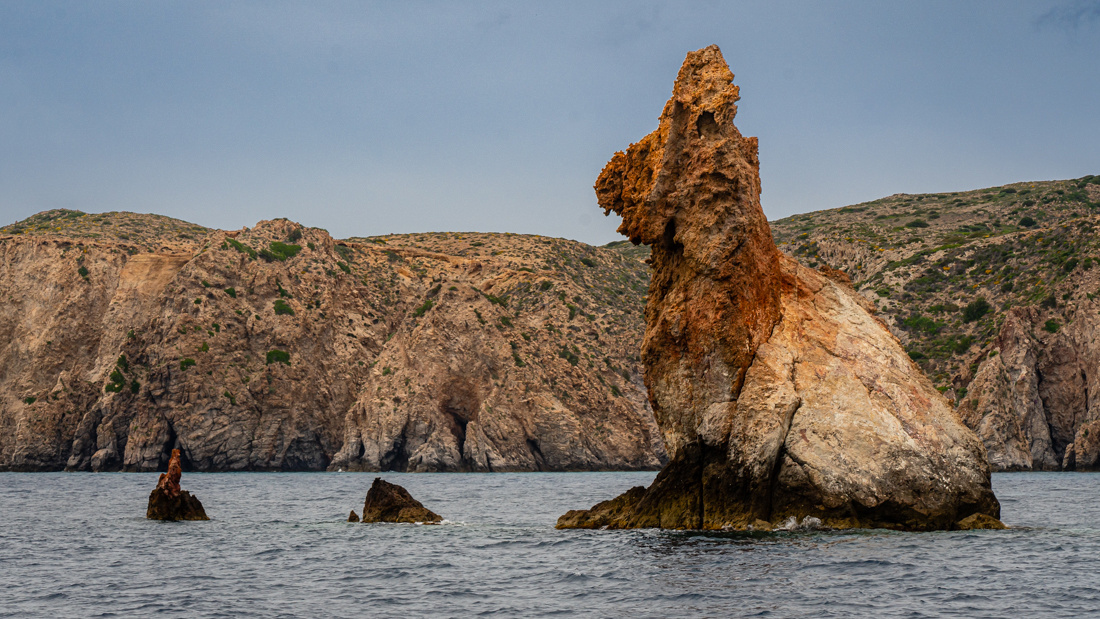 These natural sculptures are near Plathenia Beach and the entrance of the bay of Milos.  This formation looks like a rabbit. 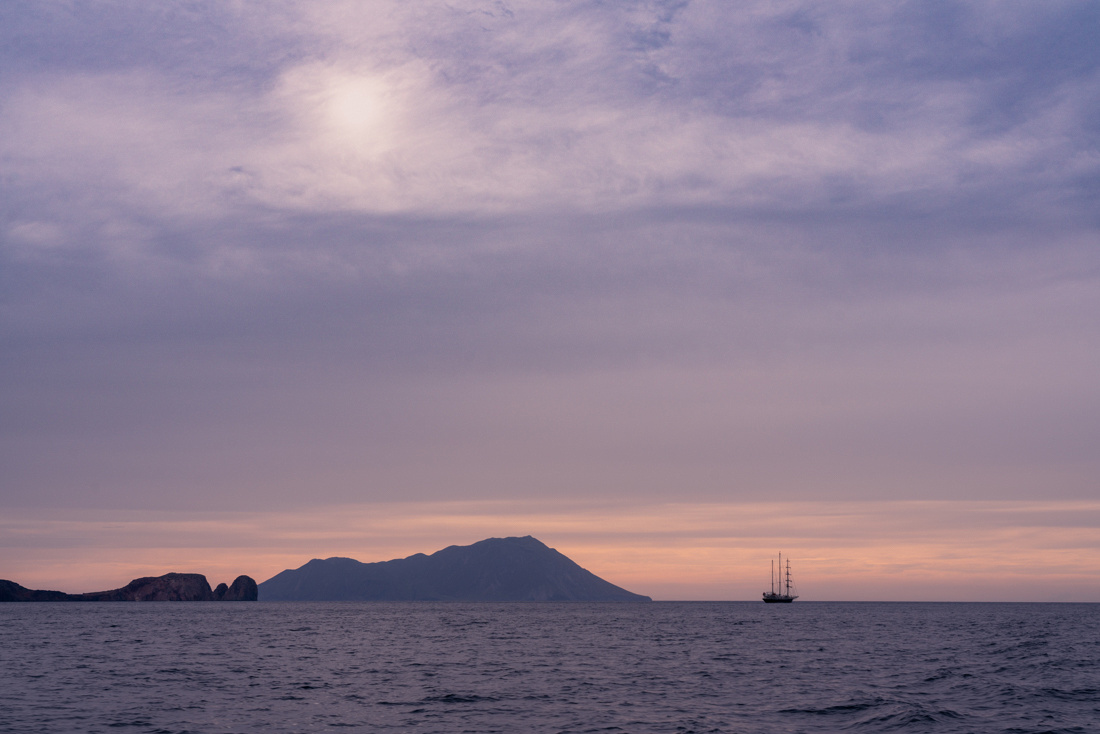 Could this be a pirate ship? 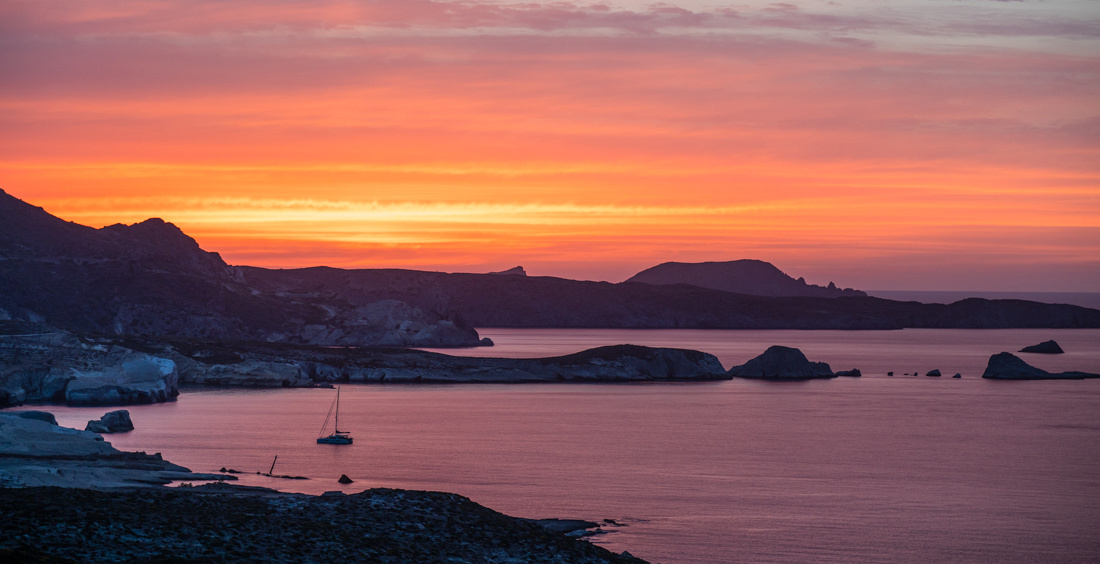 After a wonderful day cruising around the island, we headed back to the hotel.  As we saw these wonderful colours,  Laurie stopped the car so I could take a quick photo.

Tricia Matheson(non-registered)
Simply beautiful, Marsha! Agree that climbing up and down that ladder to the private beach with beach equipment would not be for the faint of heart.
Lynn Muller(non-registered)
Very interesting rock formations. Love the rabbit! I especially liked the sunset photo you took where Laurie stopped the car for you.
Maureen(non-registered)
The rock formations around this island are amazing and the last photo of the colours in the sunset are so beautiful. If I had to pick a favourite the sunset would be the one. Stunning. Thanks again for sharing Marsha.
Bruce(non-registered)
A lovely way to start the week.
The rock formations are amazing and the water colour, so many shades of blue.
Elizabeth(non-registered)
Such beautiful shots of the sea and sky and interesting rock formations. Greece is indeed a country of so many gorgeous islands and you certainly have captured that beauty!
No comments posted.
Loading...
Subscribe
RSS
Recent Posts
Melbourne Last blog of New Zealand Fox Glacier Haast Wanaka Queenstown and Glenorchy Moeraki Boulders and Milford Sound Penguins, Seals and Sheep Southern Alps, New Zealand Last evening in Chania
Keywords
Croatia Crete Morocco New Zealand South Island Cuba alberta National Park galapagos
Archive
January February March April May June July August September October November December
© Marsha Fouks