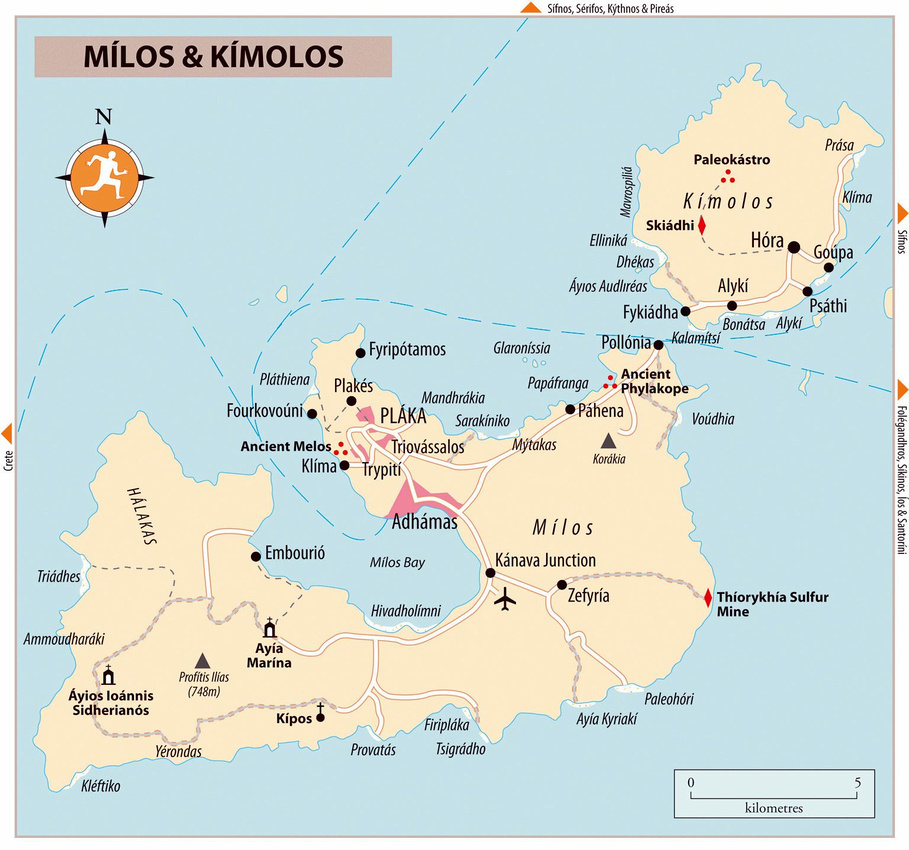 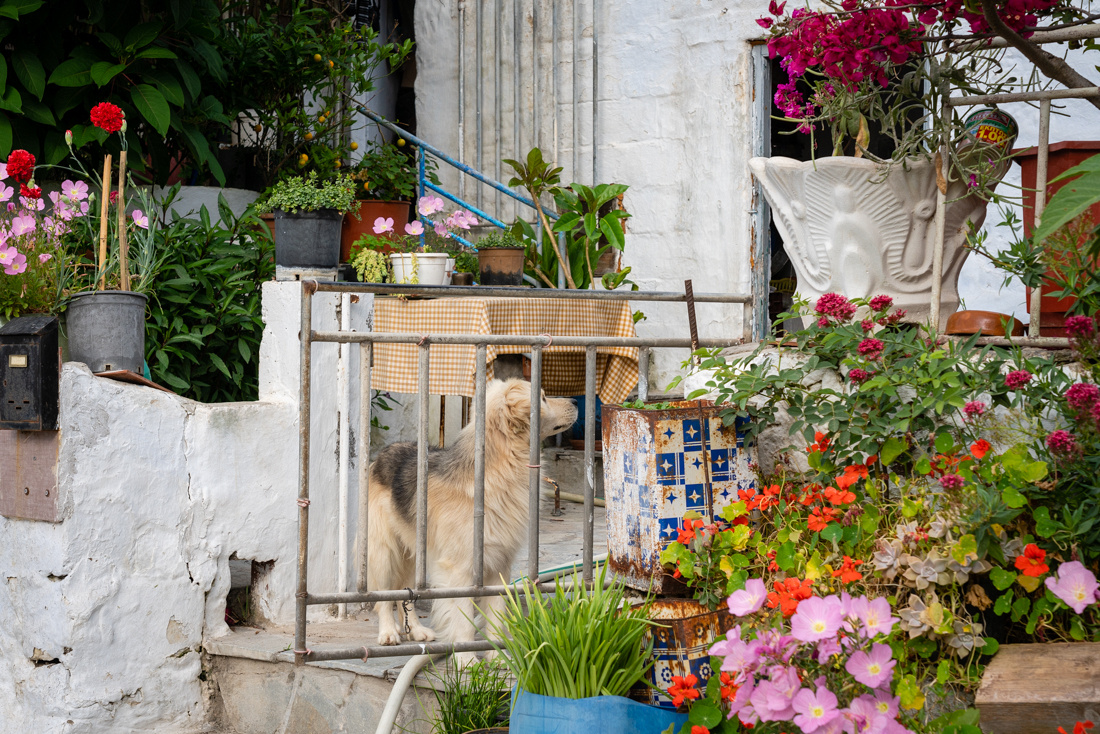 This morning we went to see the beach town of Paliohori, located in the southeast island of Milos, ten kilometres from Adamas.   On the way,  we stopped to check out a few different areas that we had seen before but not had the time to stop. 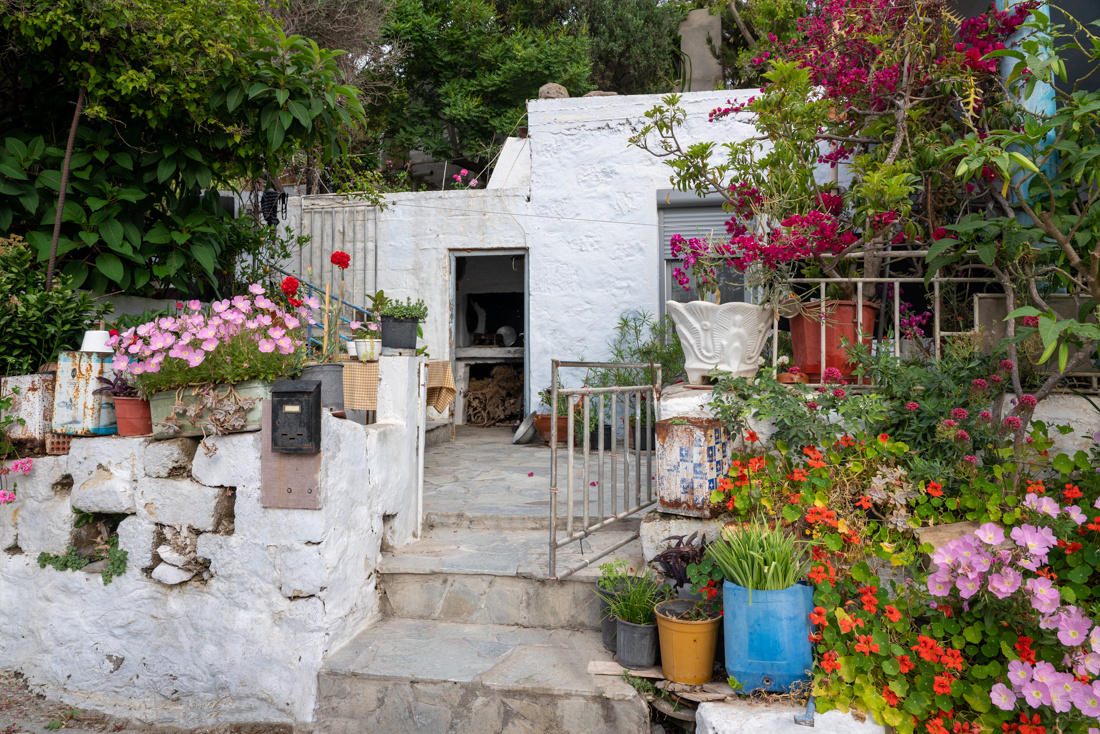 We saw many colorful gardens. 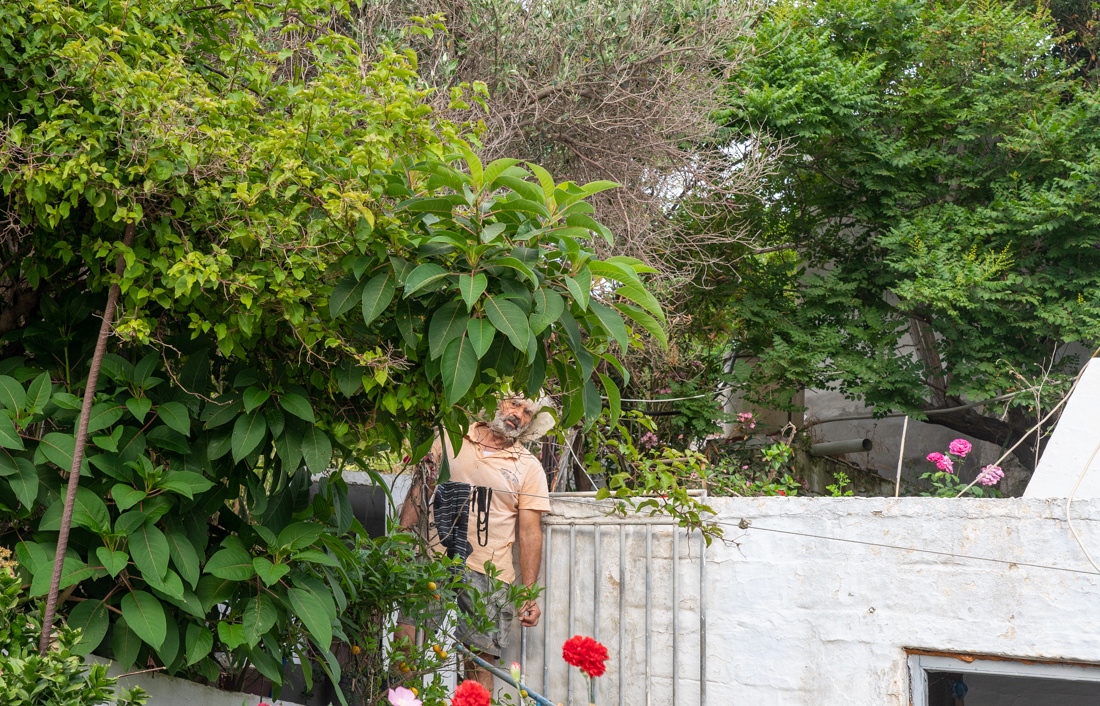 I guess this local was wondering what I was photographing.  He kind of just popped out of nowhere. 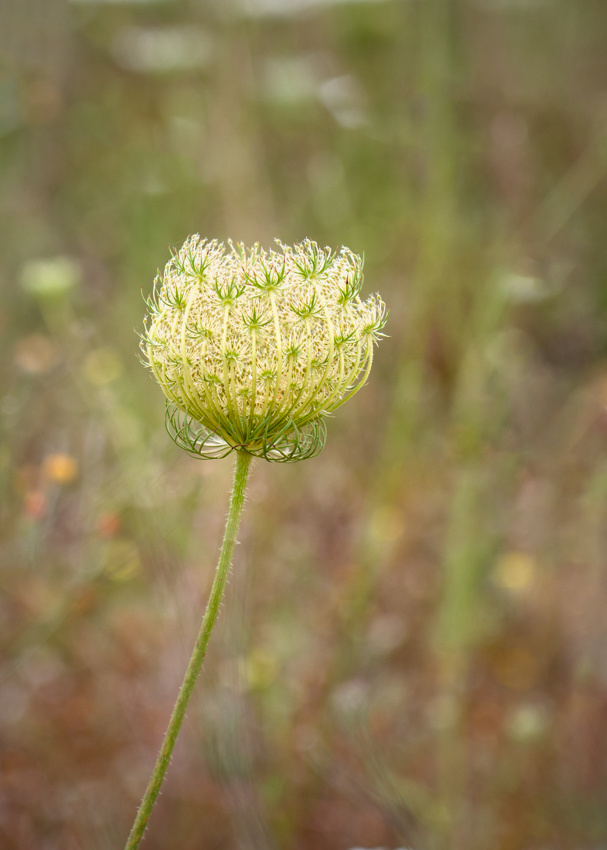 On the drive we came across a field of what Jane thought were Queen Anne's Lace. 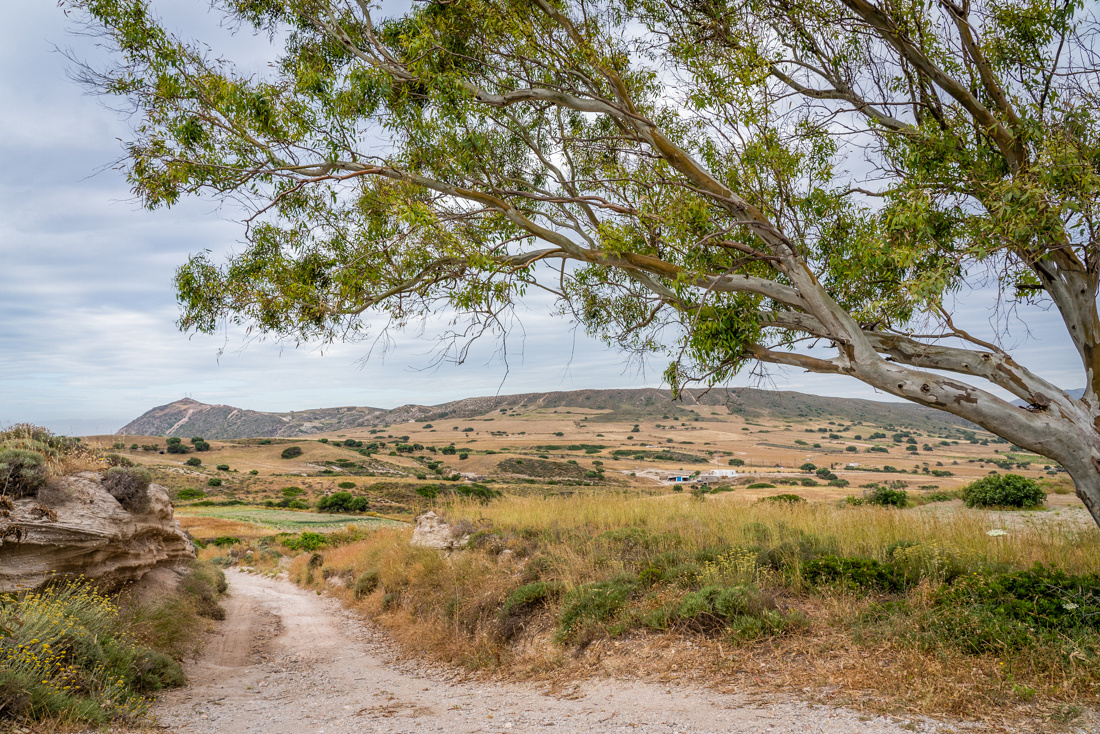 We stopped the car to check out this view of the landscape. 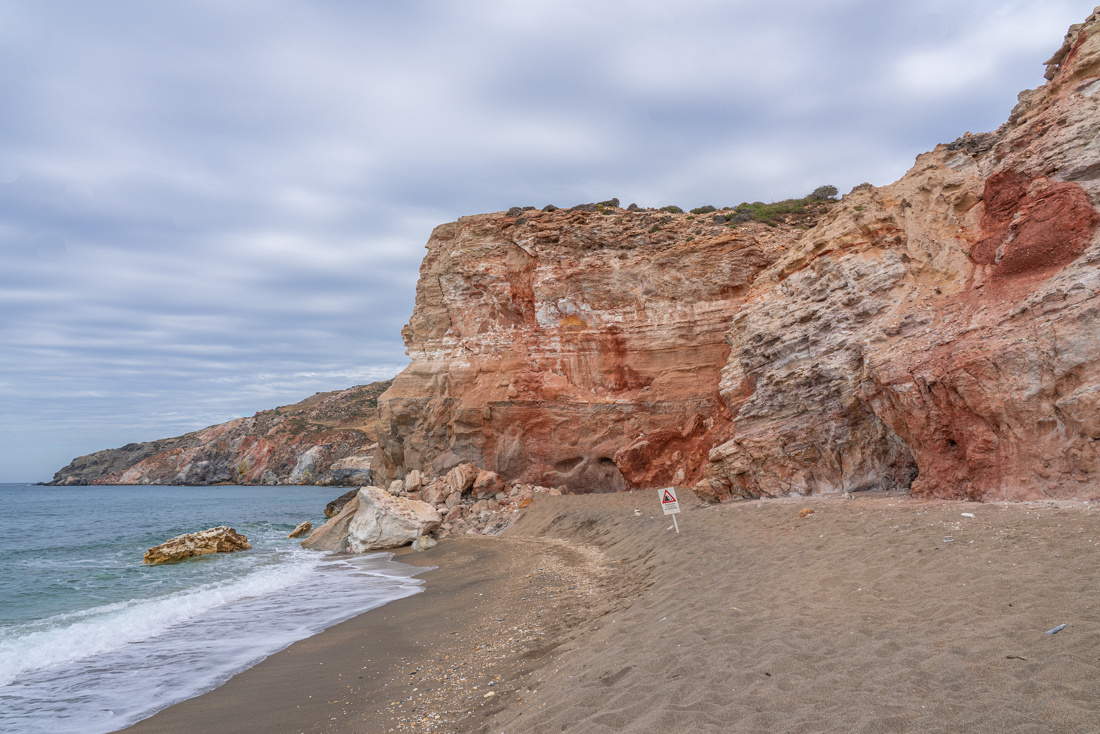 Eventually we made it to the beach.  There are actually three beaches at Paliohori.  The one in the middle is the bigger one and the most popular.  These beaches have deep crystal clear water.   Hot  water arises from the earth in several spots in the water which makes these beaches very unique.  You can see the sign "caution".  What I liked were the colourful volcanic rocks- you can see red, yellow, brown and white colours.  There was no one else around as it was only 8.30 in the morning. 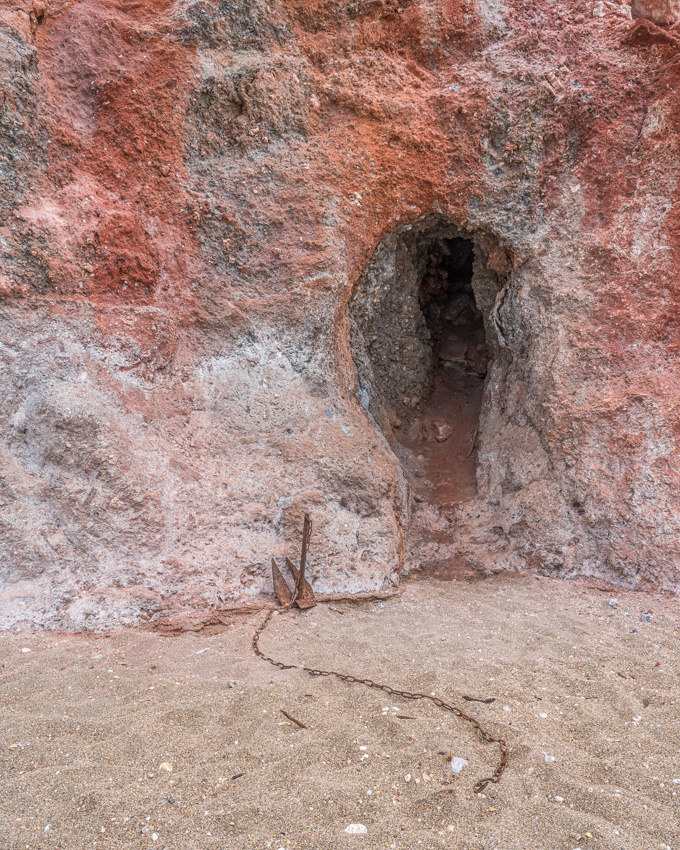 An old cave in the area which we did not go in. 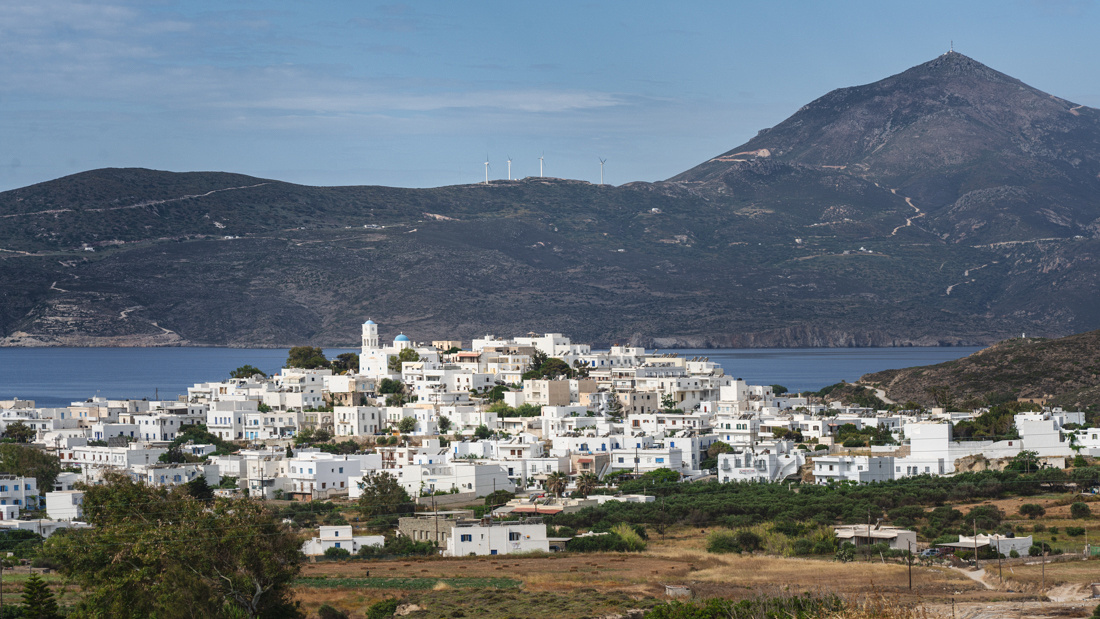 After leaving the beach, we drove to Plaka which is a well-preserved village and the capital of Milos.    As with many Greek villages, it was built like a maze of alleys to confuse pirates. 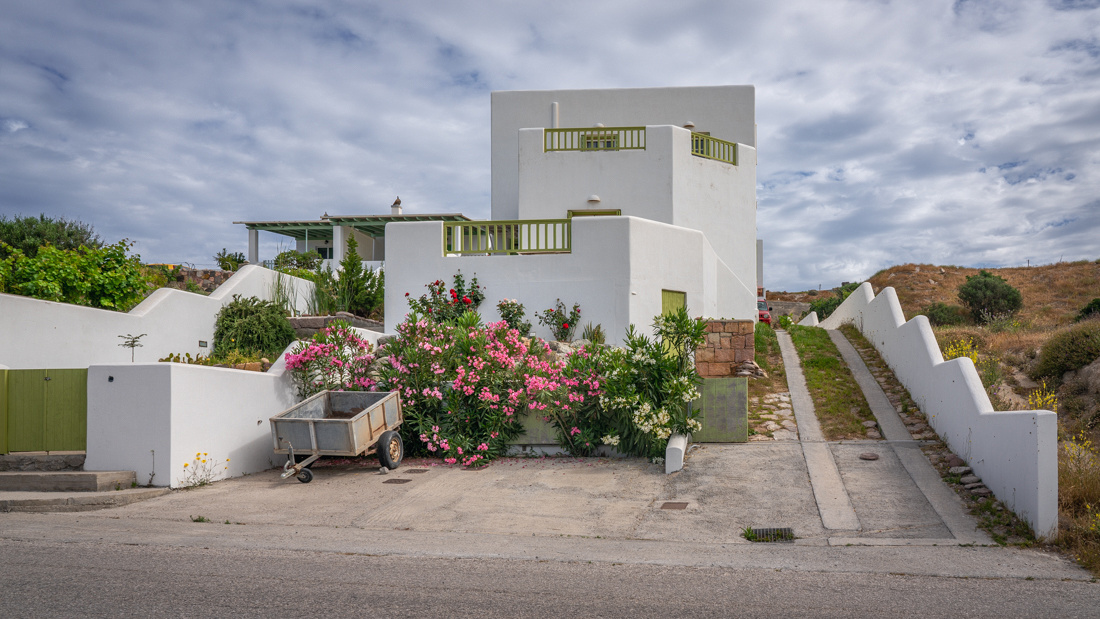 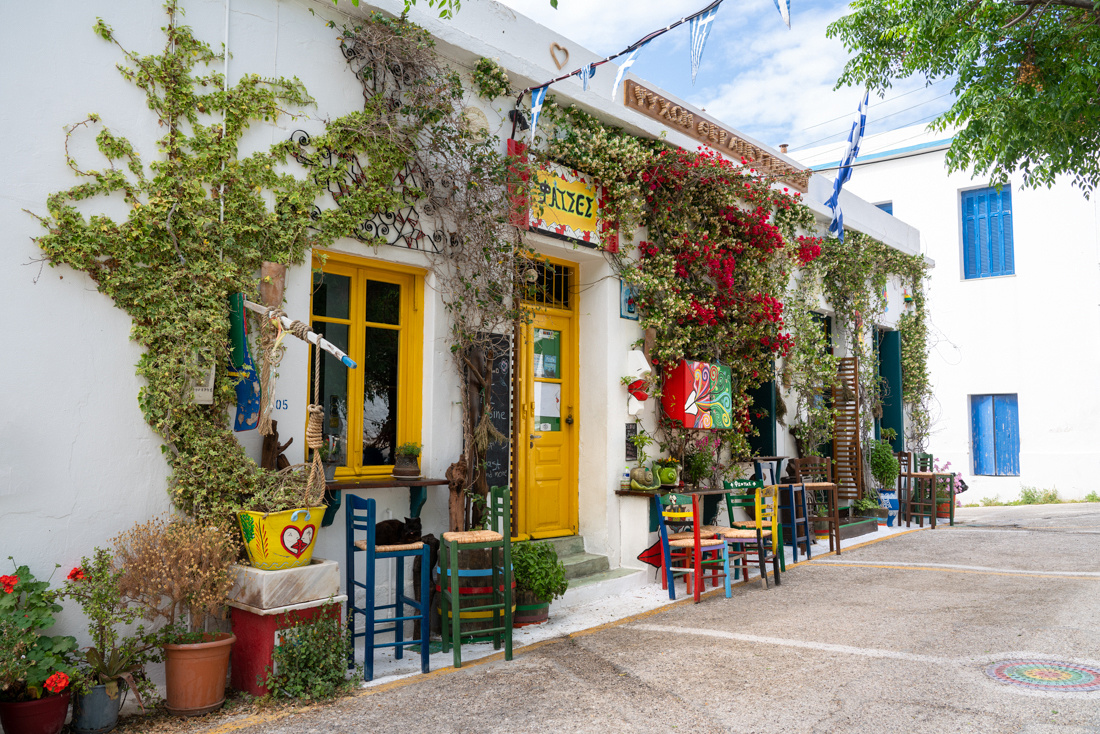 We wandered around the windy streets exploring the town. 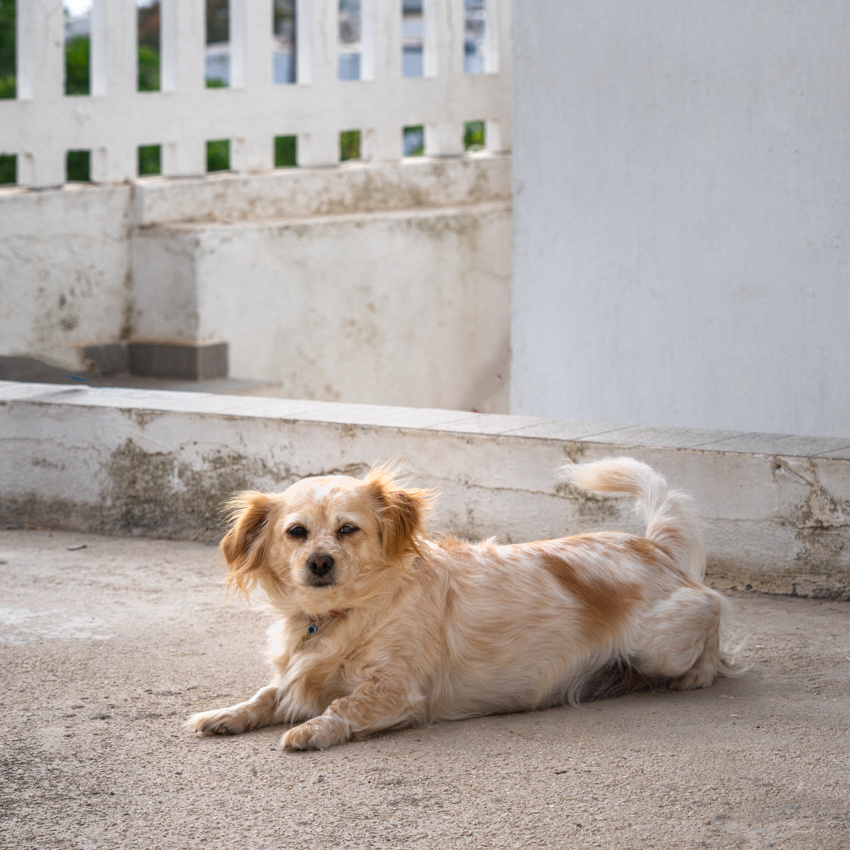 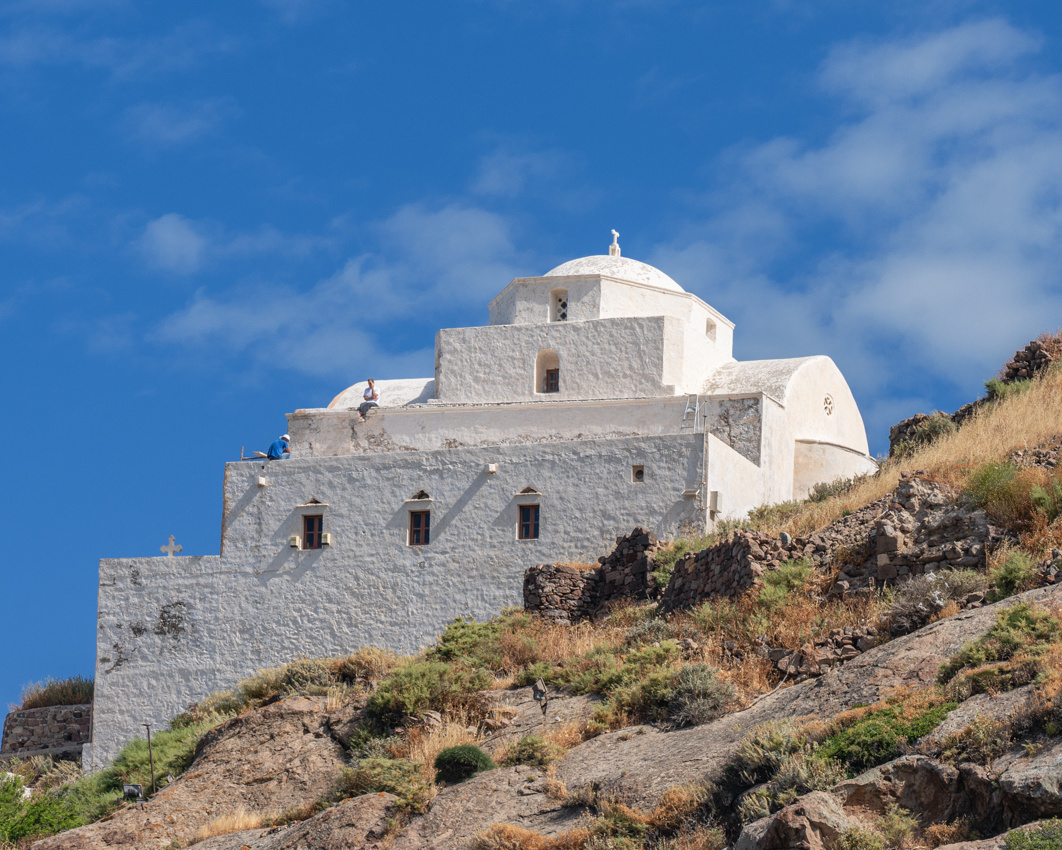 We finally found a great place for brunch with a beautiful view of this church on the hill.  Even though it was a Sunday, painters were working on the structure. 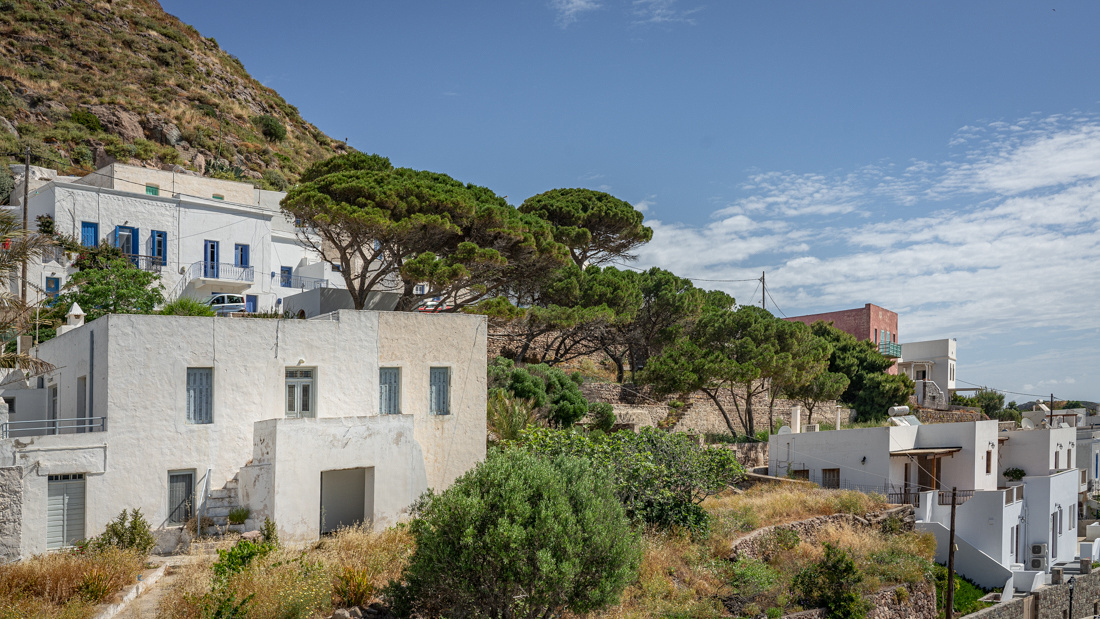 Another view from the restaurant. 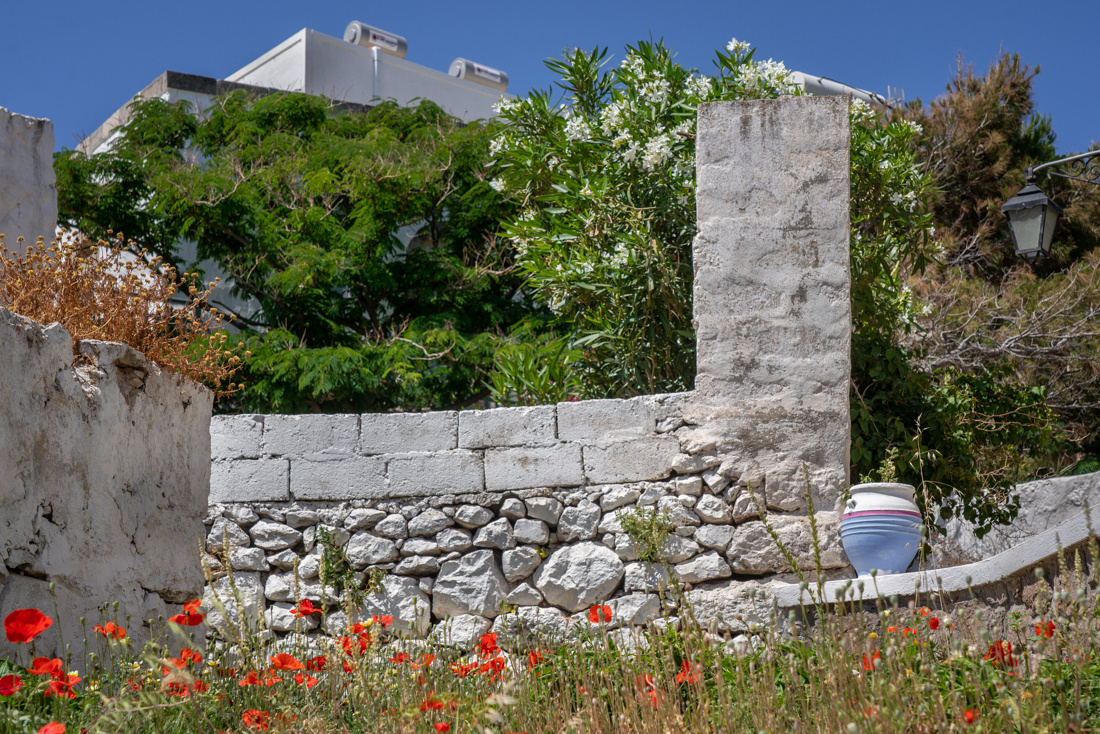 After Brunch we continued walking through the village. 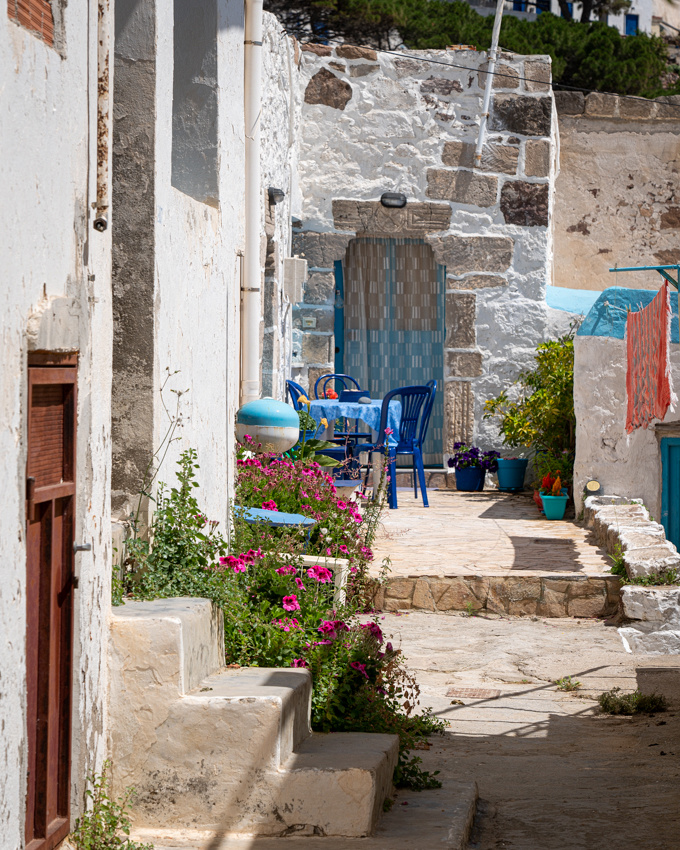 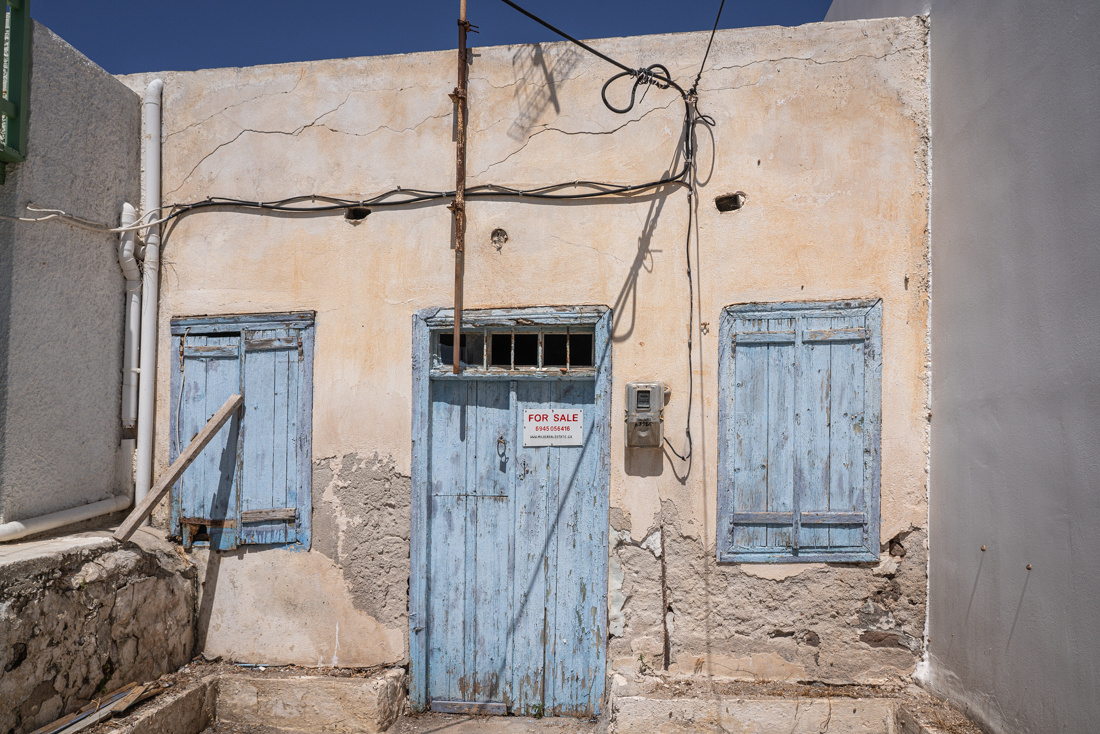 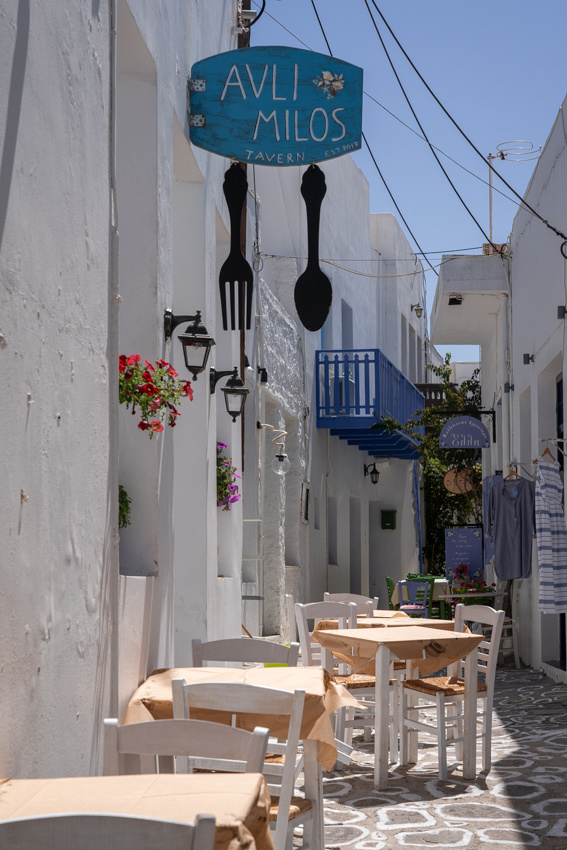 At some point, Laurie got a phone call from the hotel manager wondering where we were.  We were supposed to check out by noon but we thought it was 2 PM.  Apparently a young family was waiting for the rooms so the hotel was very unhappy with us.  So at that point we left the town to check out.  After checking out we made one more stop at Sarakiniko (see prior blog) before heading out to see a few more towns before catching our late afternoon  flight to Crete. 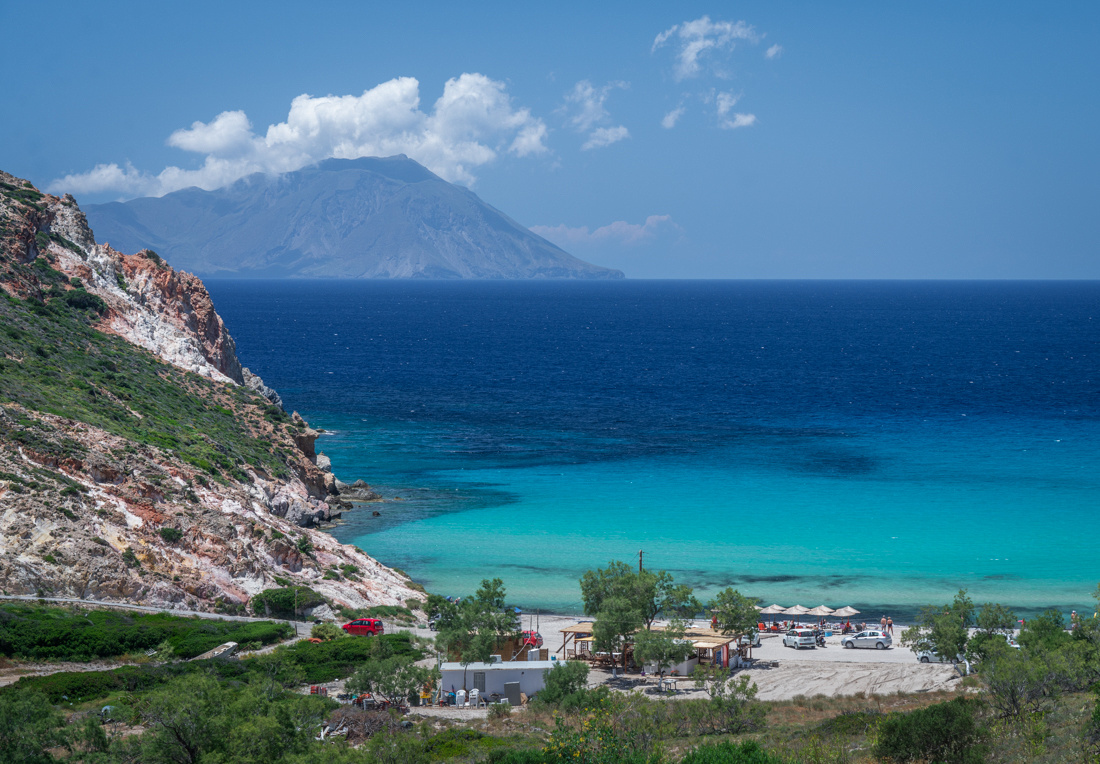 Our first stop was the beach at Plathiena.  This is the view of the beach from the road above.   The water was chrystal clear and the beach was not too crowded. 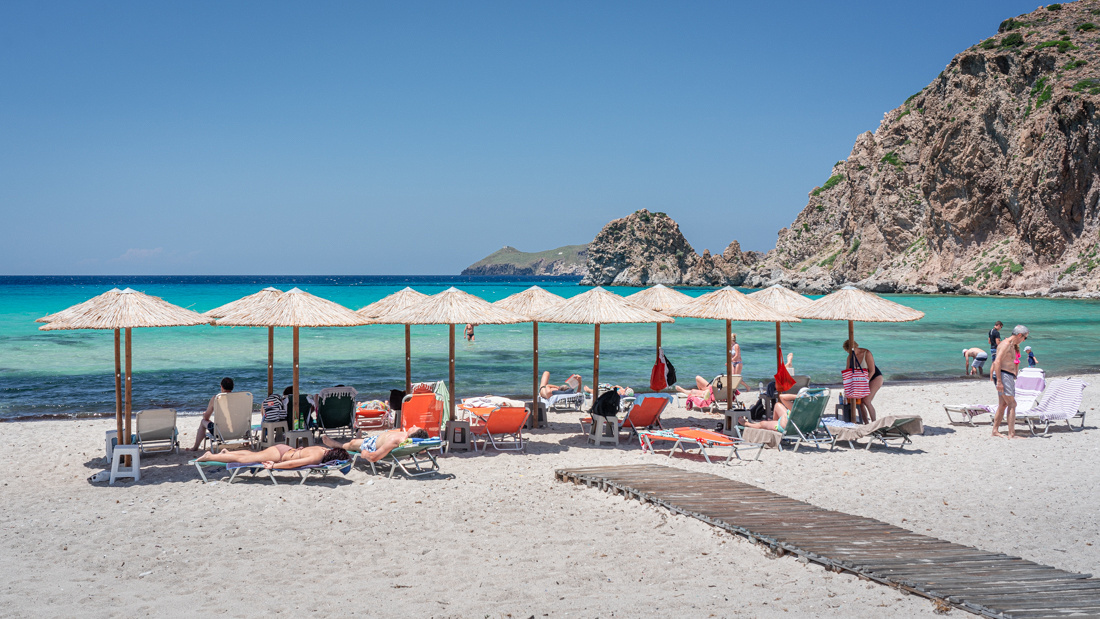 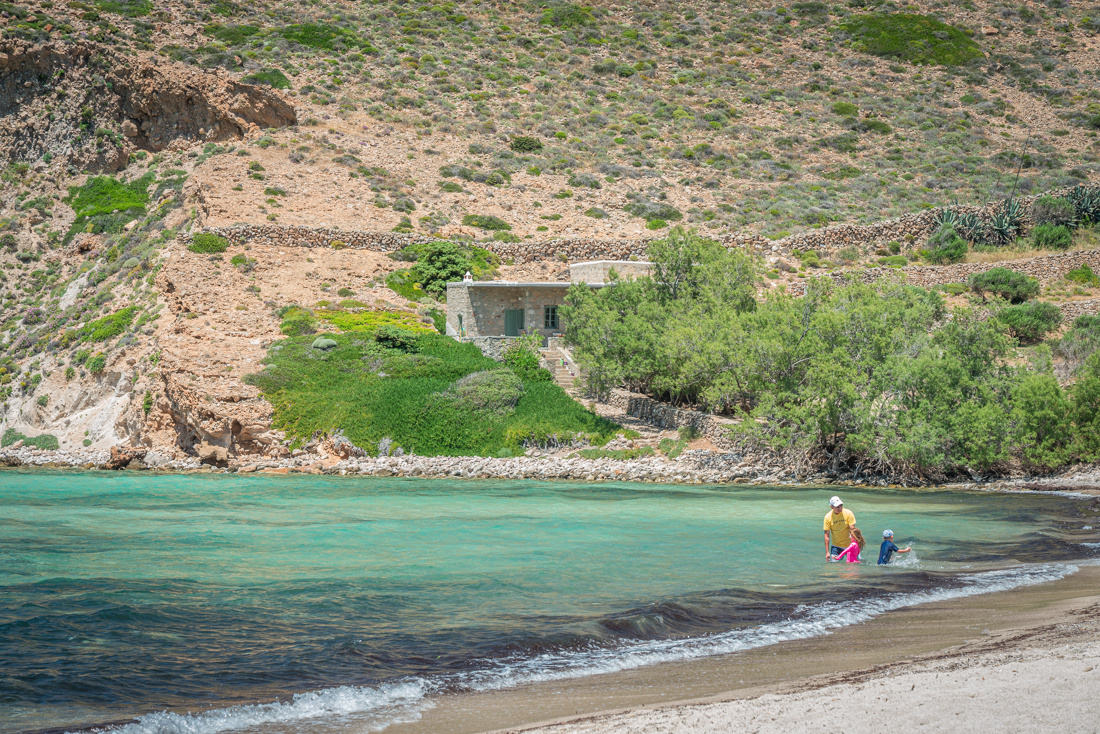 There were a few people in the water. 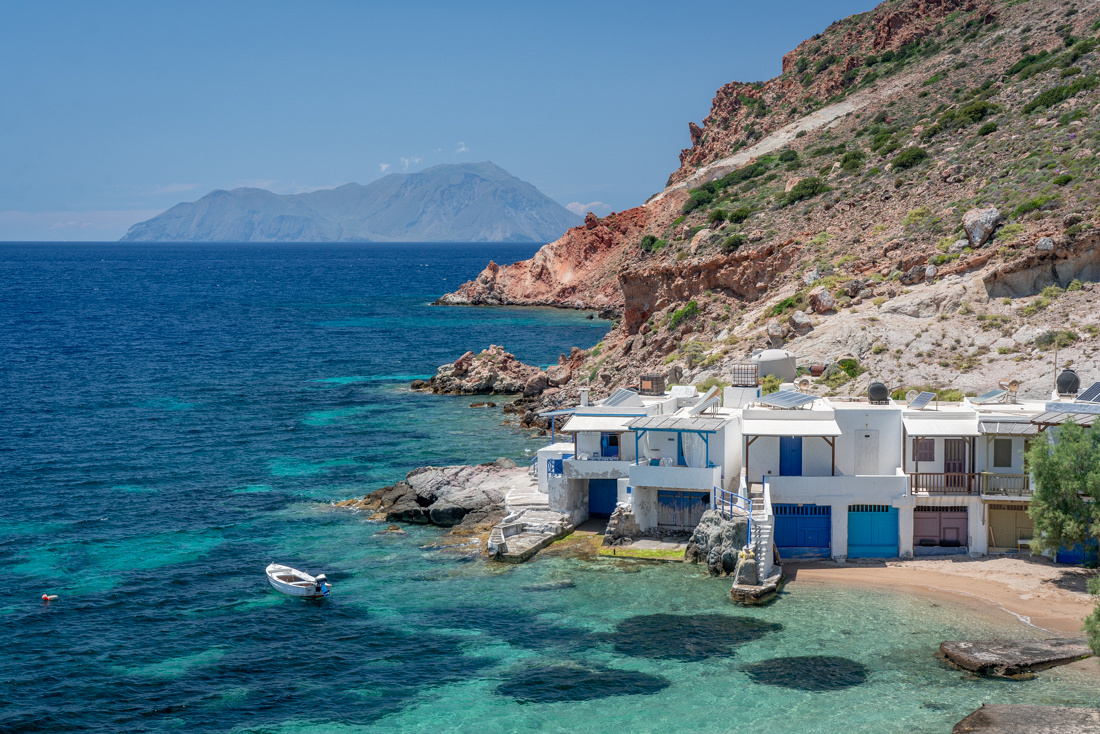 After leaving Plathiena, we headed to the traditional fishing  village of Fourkovouni on the northern side of Milos.   We  had sailed by this village the day before.  We wandered around the houses and did not see one person. 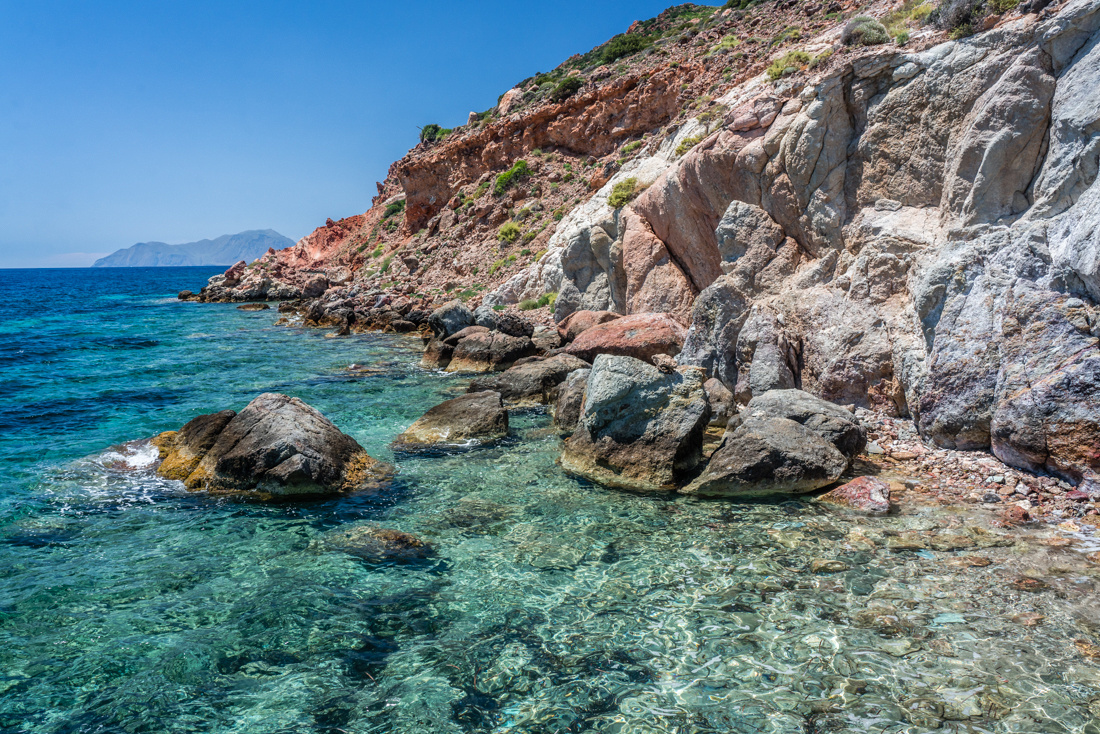 Its hard to believe just how clear the water was. 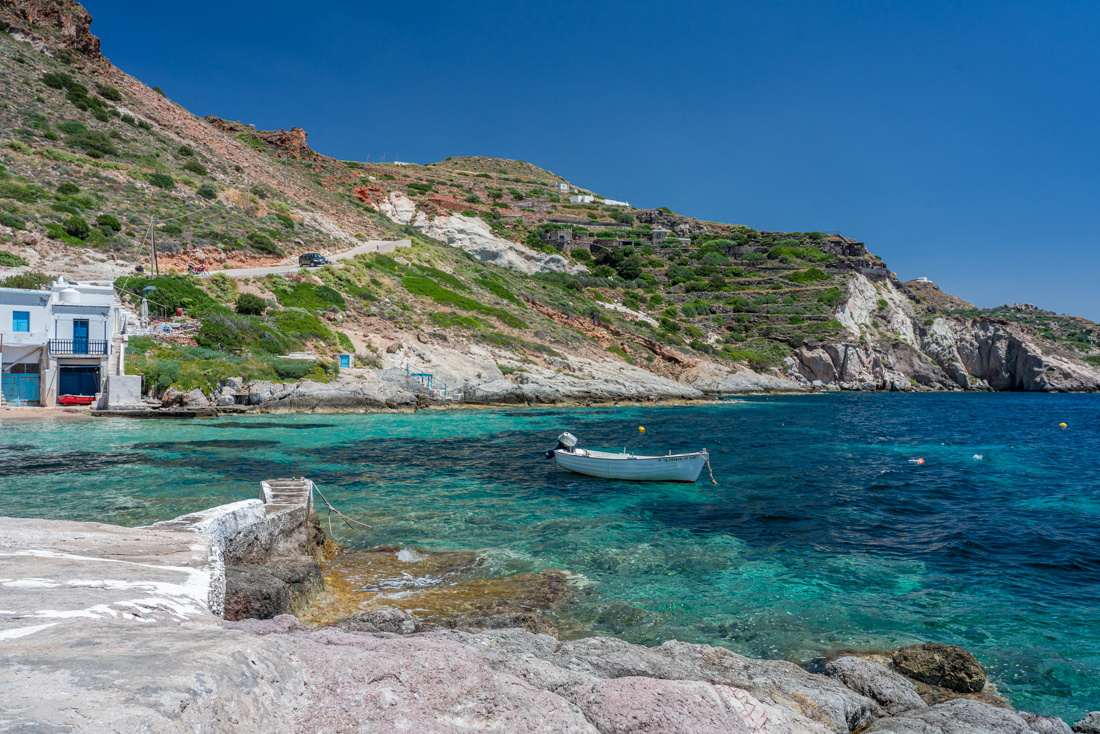 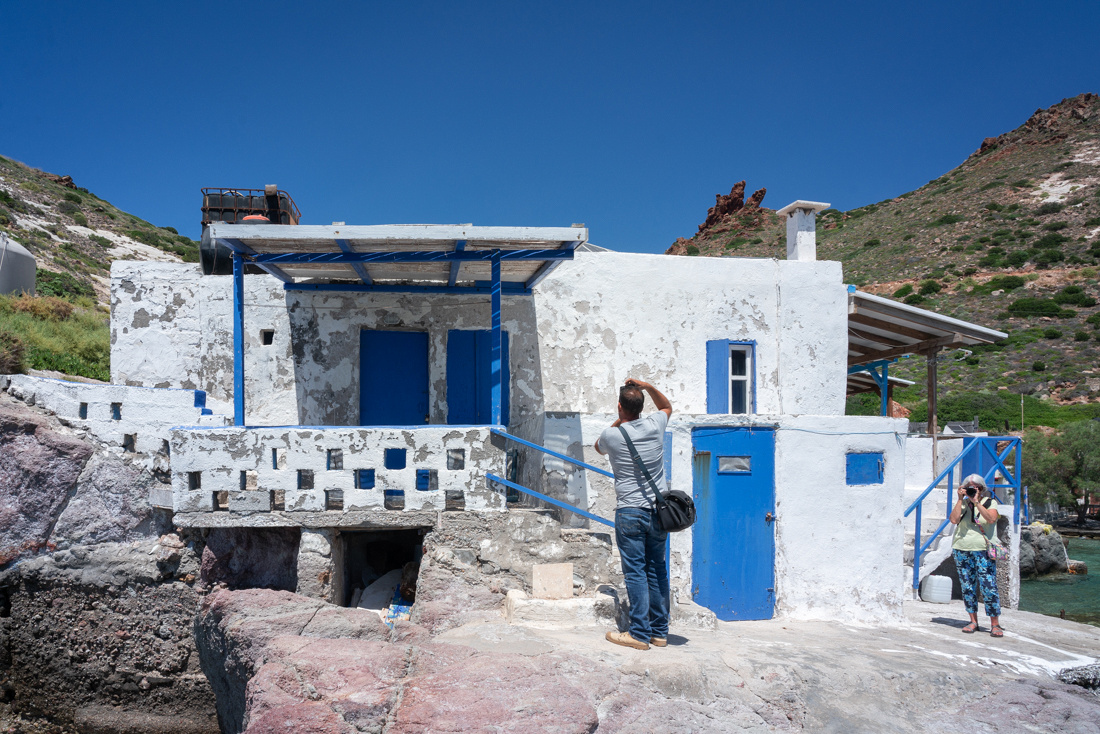 Laurie and Jane enjoying looking for subjects to photograph.  Soon it was time to make our way to the airport.  The airport in Milos was small, had no air conditioning and looked like it had never been updated since it was built-maybe in the 50's?  When we went through fairly lax security, there was only one person on duty.  After we had gone through, there was a small waiting room however we were not allowed to stay in it for long as they wanted the room for passengers on another flight.  So we had to stand outside waiting.  Of course the flight was late coming in so we waited a long time standing outside before walking a long way to get on the small plane which would take us to Athens where we waited a couple of hours for our flight to Crete.

Lynn Muller(non-registered)
Beautiful shots, Marsha. I wonder why there was a hangman's noose outside one of the places? Interesting.
Kimberly Schueler(non-registered)
Beautiful flowers and coast. Happy MothersDay.
bruce(non-registered)
The beach at Plathiena is where I want to be right now.
What lovely photos to look at on a mid May winterish morning in TO.
Hope that you are both keeping well.
Sonja Martin(non-registered)
Thank you Marsha for sharing your photos and memories from your travels. I always enjoy them but especially now when we are in lockdown. I love Greece, warm see, beaches and colorful towns. Greece is for me one of the places were I would like to go again. So, thank you very much for this trip with you. ❤️
Gretchen Taylor(non-registered)
Oh how I was in Greece ...but would probably be in lock down like I currently am in Seattle. Your photos were absolutely stunning. It looks like you had extraordinary, if not hot, weather. Bright sunshine and those white white walls! Really fabulous, Marsha. Thanks so much for putting in the time to create this most extraordinary compilation of photos from Milos and beyond.
No comments posted.
Loading...
Subscribe
RSS
Recent Posts
Melbourne Last blog of New Zealand Fox Glacier Haast Wanaka Queenstown and Glenorchy Moeraki Boulders and Milford Sound Penguins, Seals and Sheep Southern Alps, New Zealand Last evening in Chania
Keywords
Croatia Crete Morocco New Zealand South Island Cuba alberta National Park galapagos
Archive
January February March April May June July August September October November December
© Marsha Fouks