This morning we left Rethymno for Chania, the second largest city of Crete and our last city on the tour.The  city lies along the north coast of the island, about 70 km west of Rethymno so it was not a long drive for us. 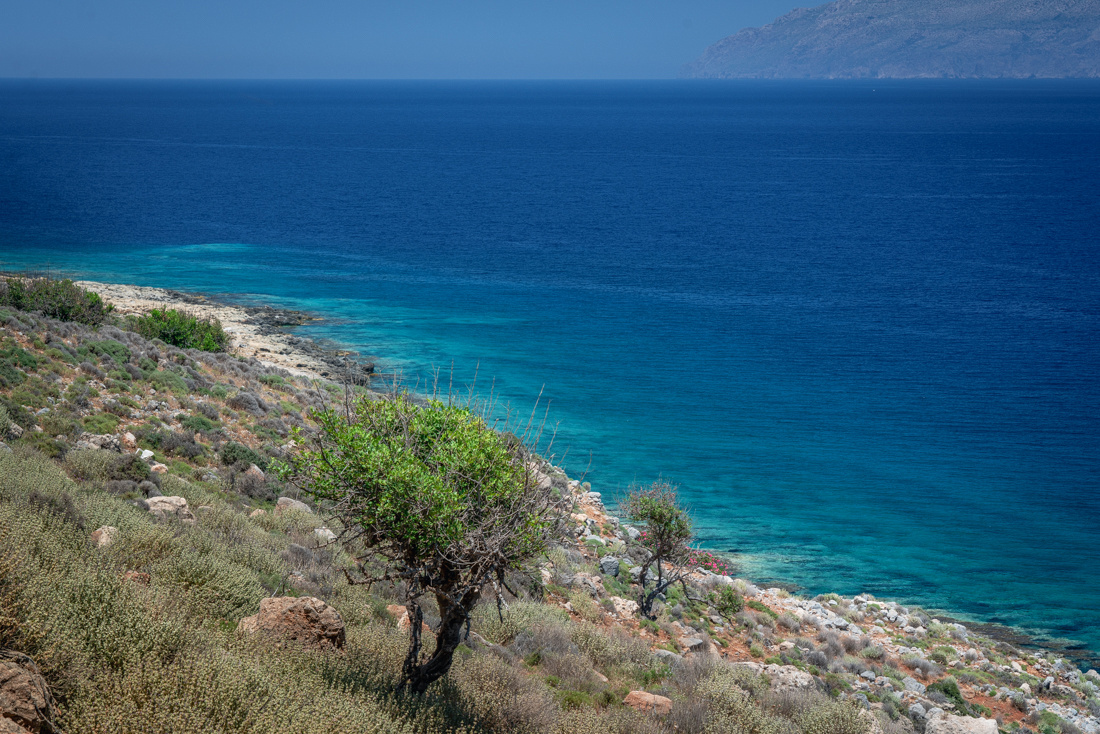 After checking into the hotel, Laurie rented a four wheel vehicle and we left to visit Balos Beach.  The scenery was spectacular.  We soon understood why Laurie had rented the 4-wheel drive.  We ended up driving along a narrow and gravel roadway overlooking the water. 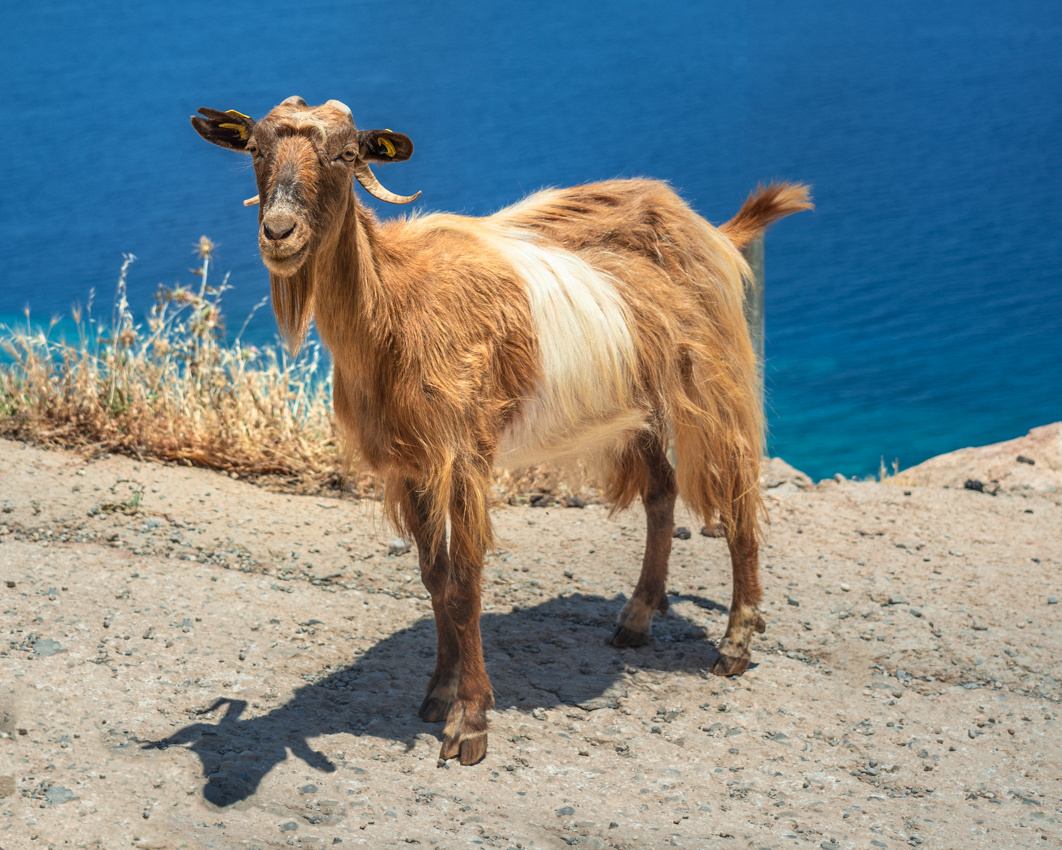 We saw goats everywhere.  I took this shot from the car. 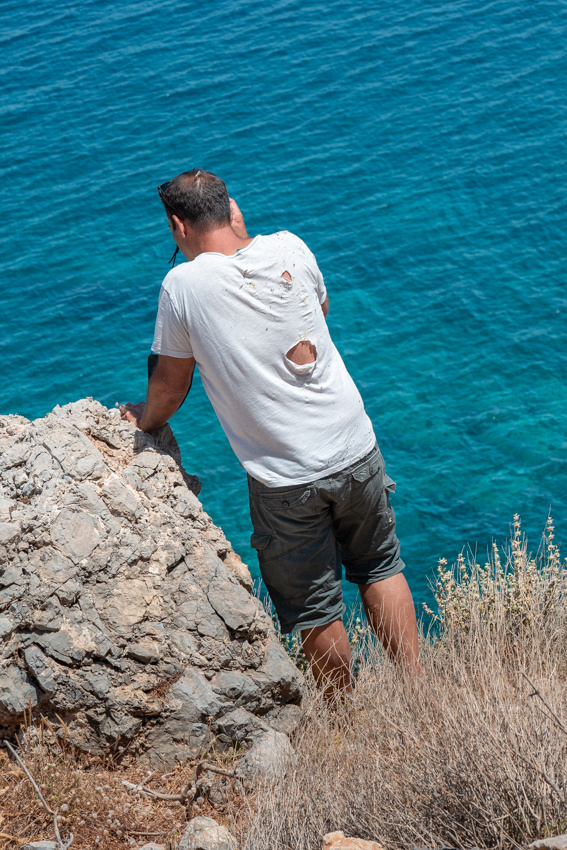 No, the goat didn't eat Laurie's shirt.  He actually was photographing on this hill, lost his balance on the rocks and did a forward somersault, slid on his back and landed just short of this cliff.  Jane and I watched in horror.  Fortunately, the end result was just some minor damage.  If he was in pain, he certainly was a good sport about it.  Any thoughts that I had of climbing to get a better shot quickly disappeared. 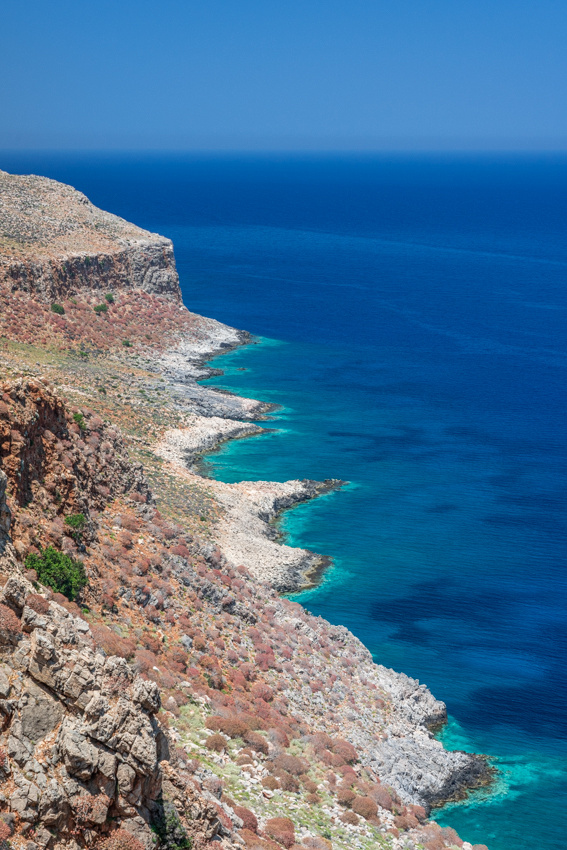 Laurie stopped the car a few times for us to photograph.  We had to check out this rocky cliff with the vegetation and gorgeous water below. 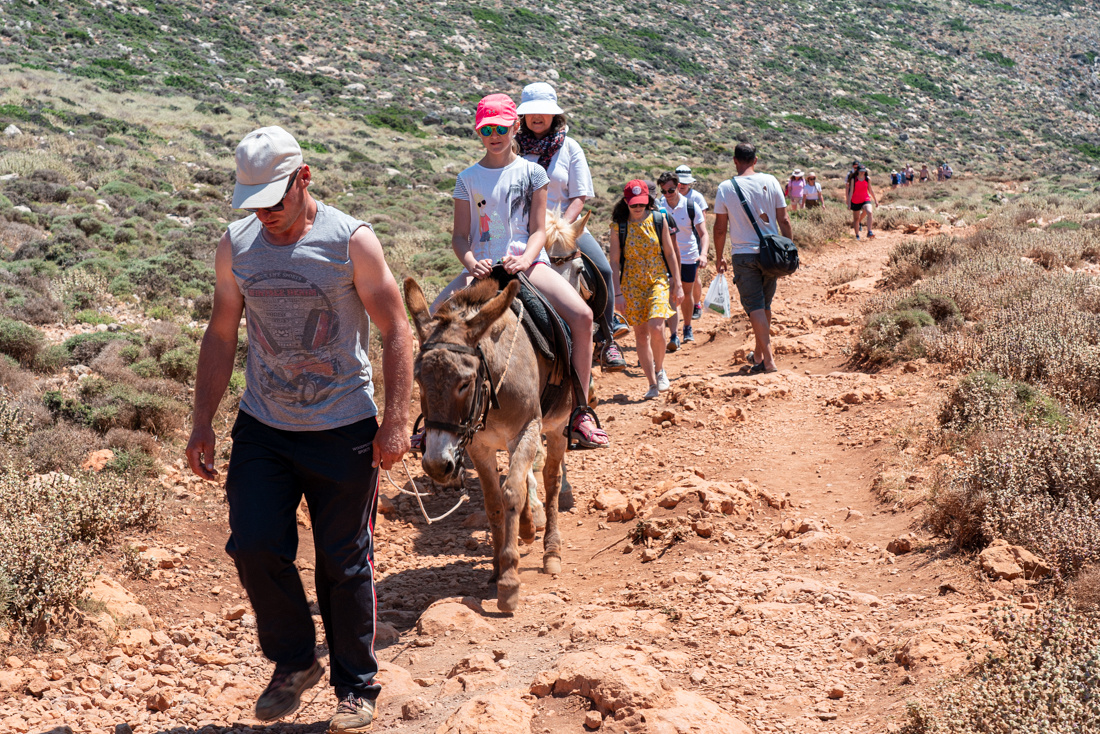 We finally got to the parking lot and made our way along the rocky, dirt path to get a view of the beach.    We came accross people returning from the beach, some riding burros.

Balos Beach.  We didn't actually climb down which would have taken far too long, and is fairly strenuous on the way up because of the steepness.   The famous lagoon is probably the most photographed beach in Crete.  Prince Charles nd Princess Diana visited Balos with their private yacht. The easier way to get to the beach is by ferry. 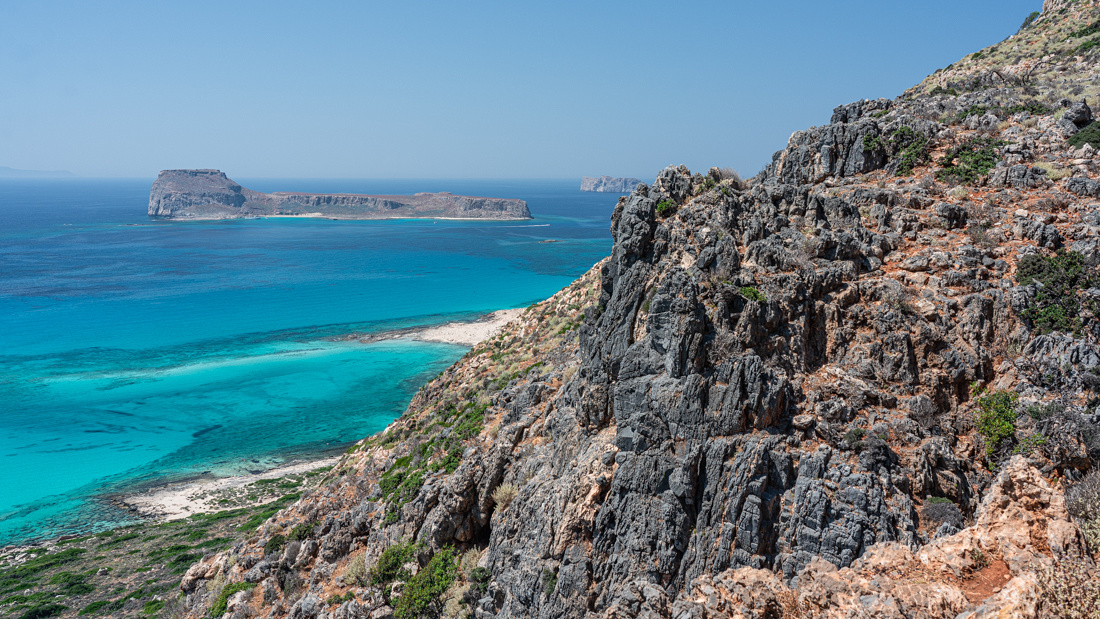 in spite of Laurie's fall, he and I did do some climbing but we were very careful. 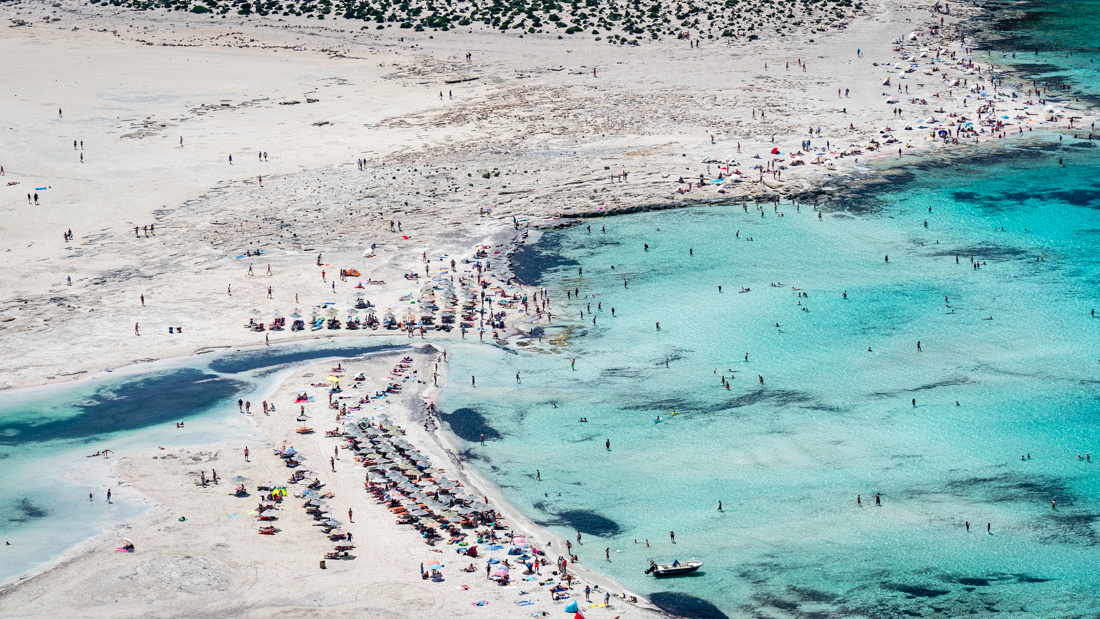 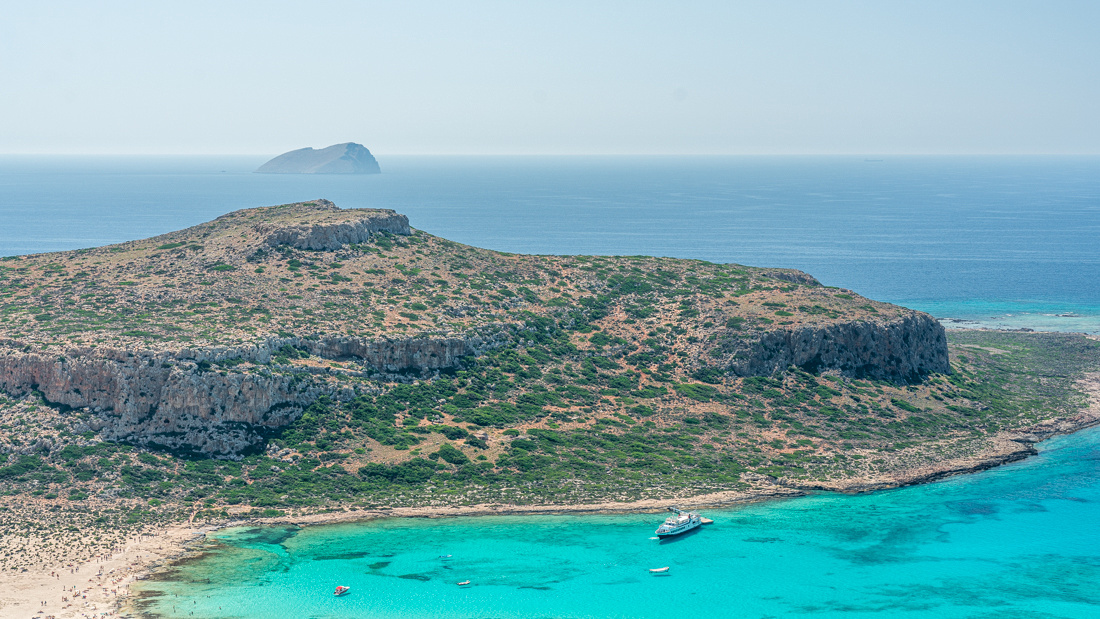 I don't think I have ever seen such a beautiful beach with the white sand, turquoise waters. and the surrounding beauty.  Although it was fairly crowded on this day, I can only image how busy it would be in the summer. 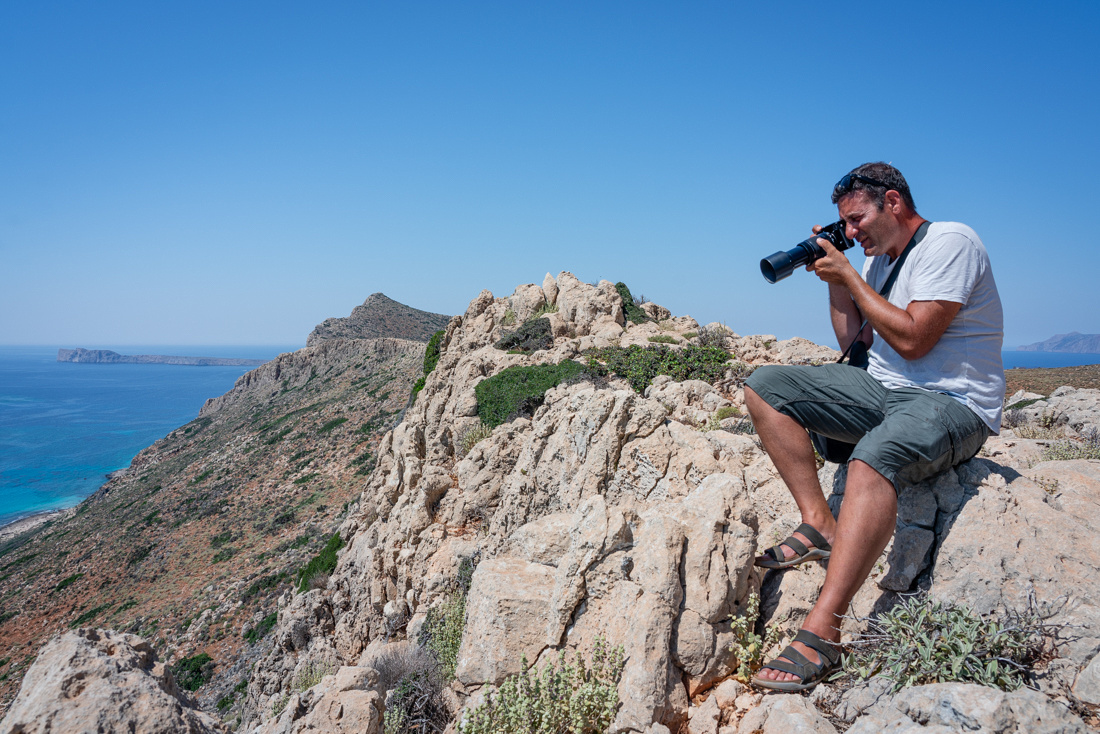 After climbing safely to the top of this cliff, we stopped to photograph and admire the scenery. 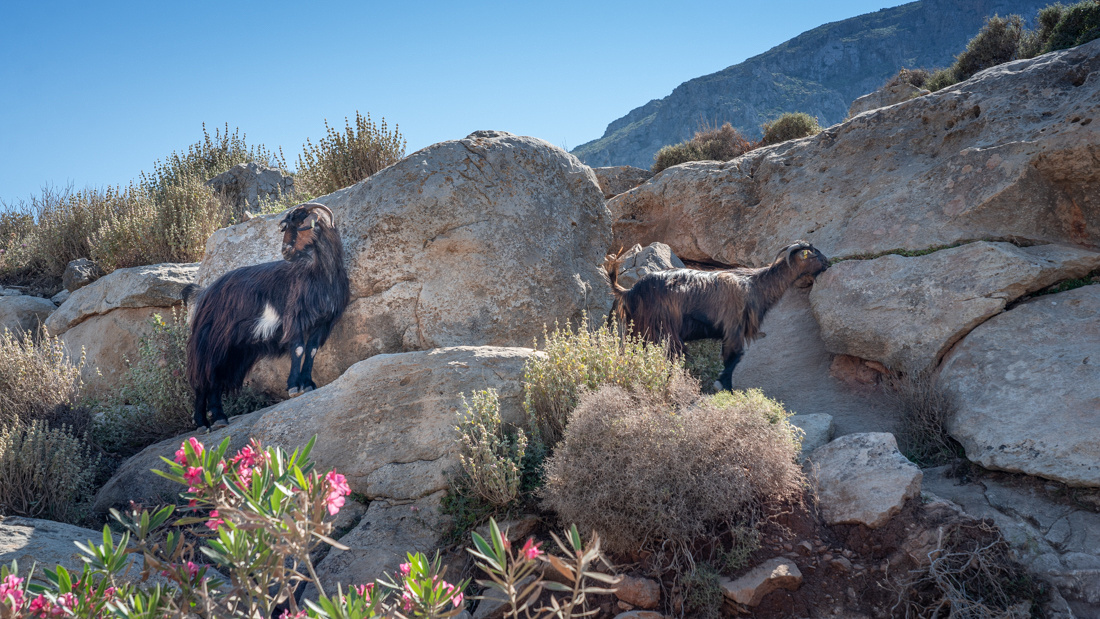 On the way back we saw a lot more goats in the hills. 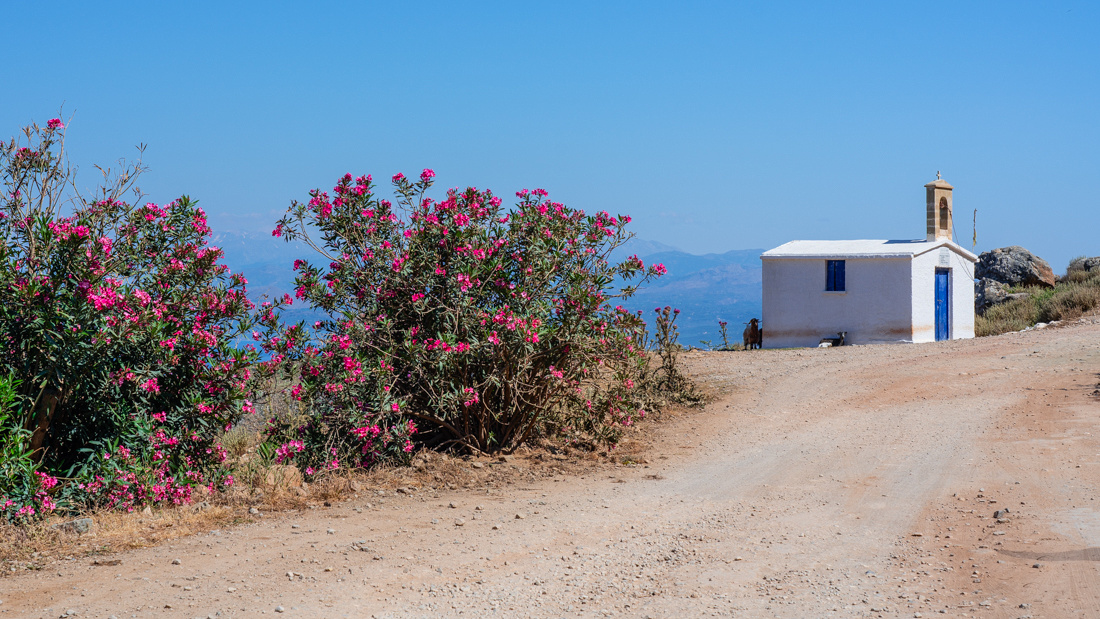 We came across this cute little chapel. 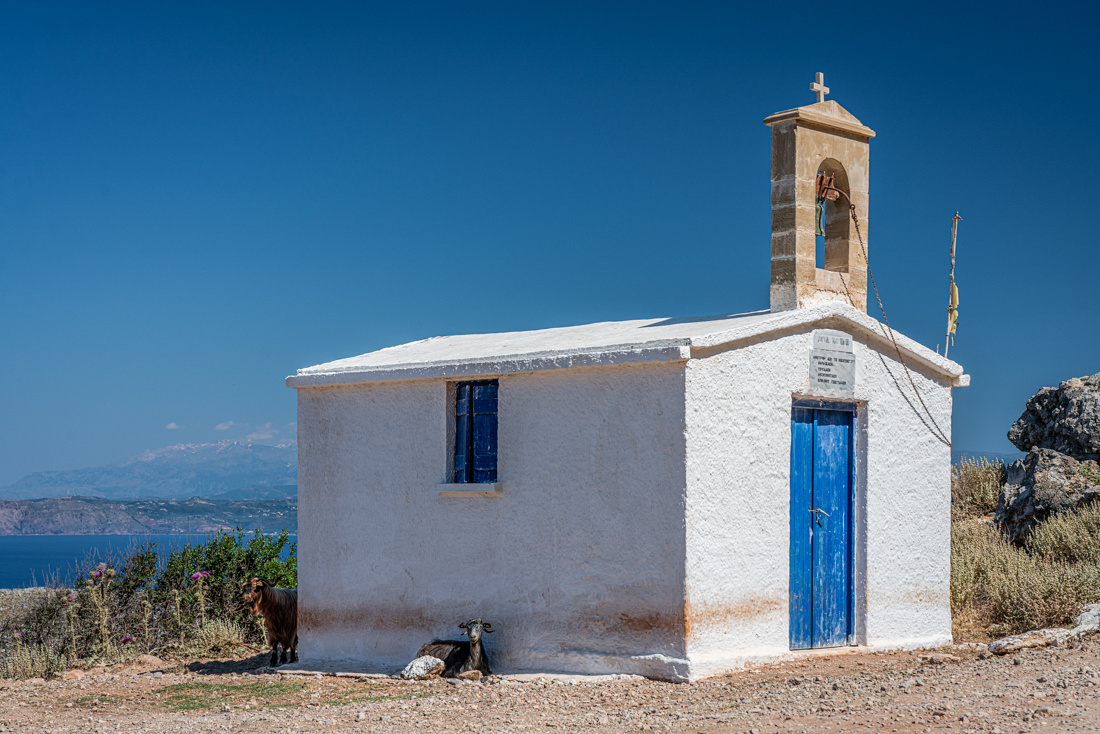 Goats were resting in the shade. 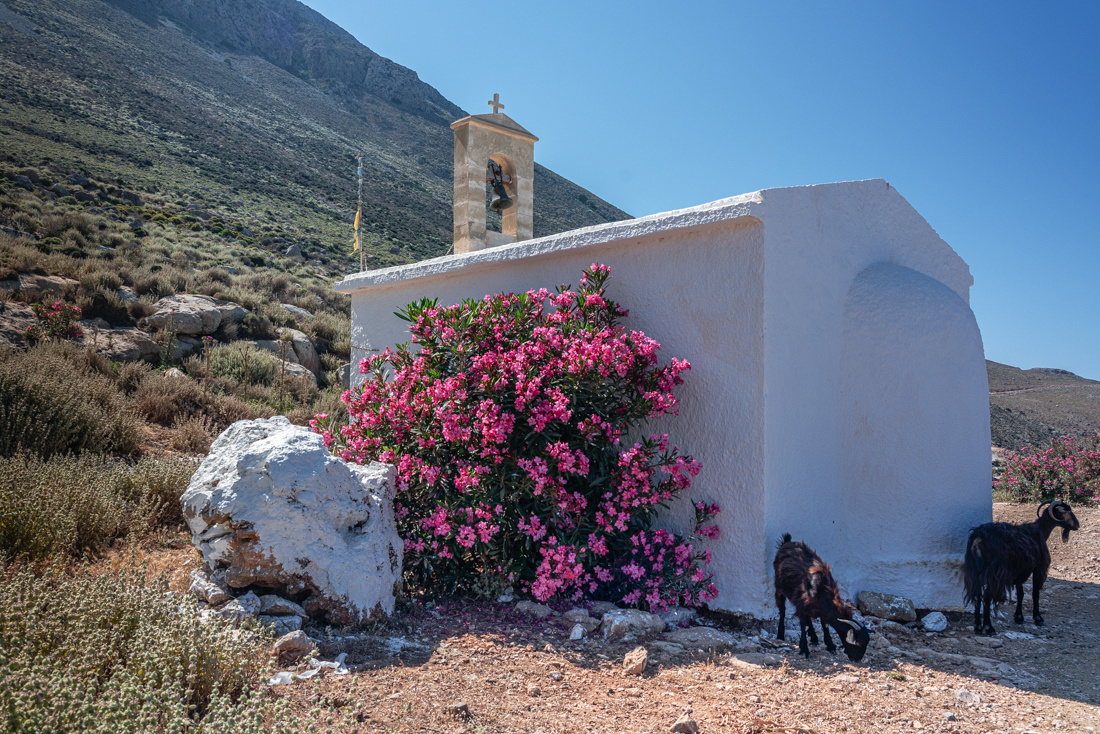 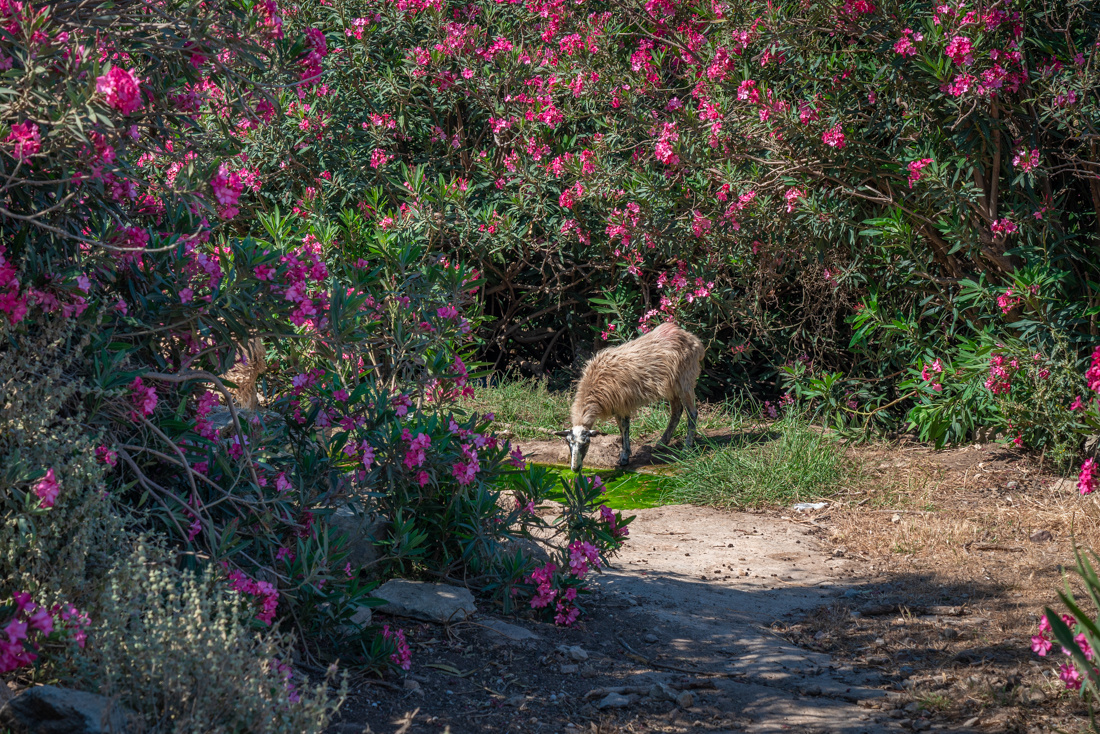 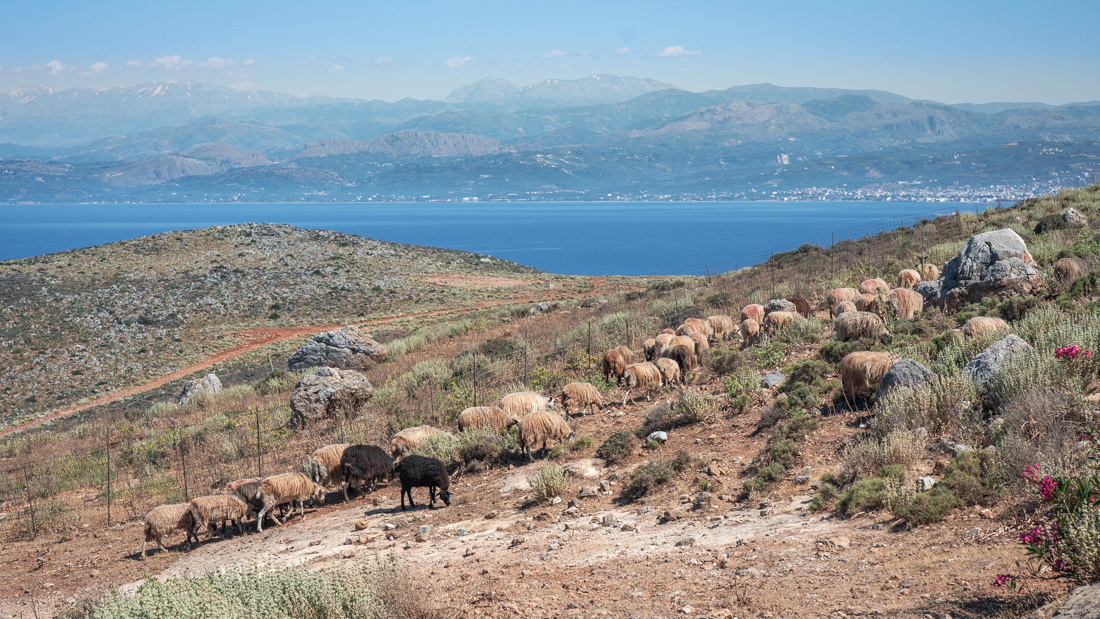 These goats  started to form a  line and follow their leader. 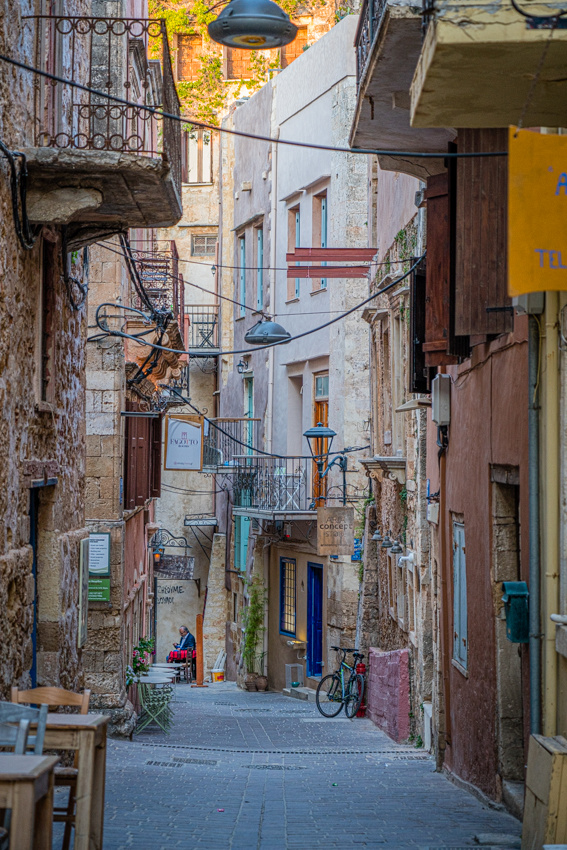 We ended up eating dinner back in Chania and then finding a location for our sunset shots. 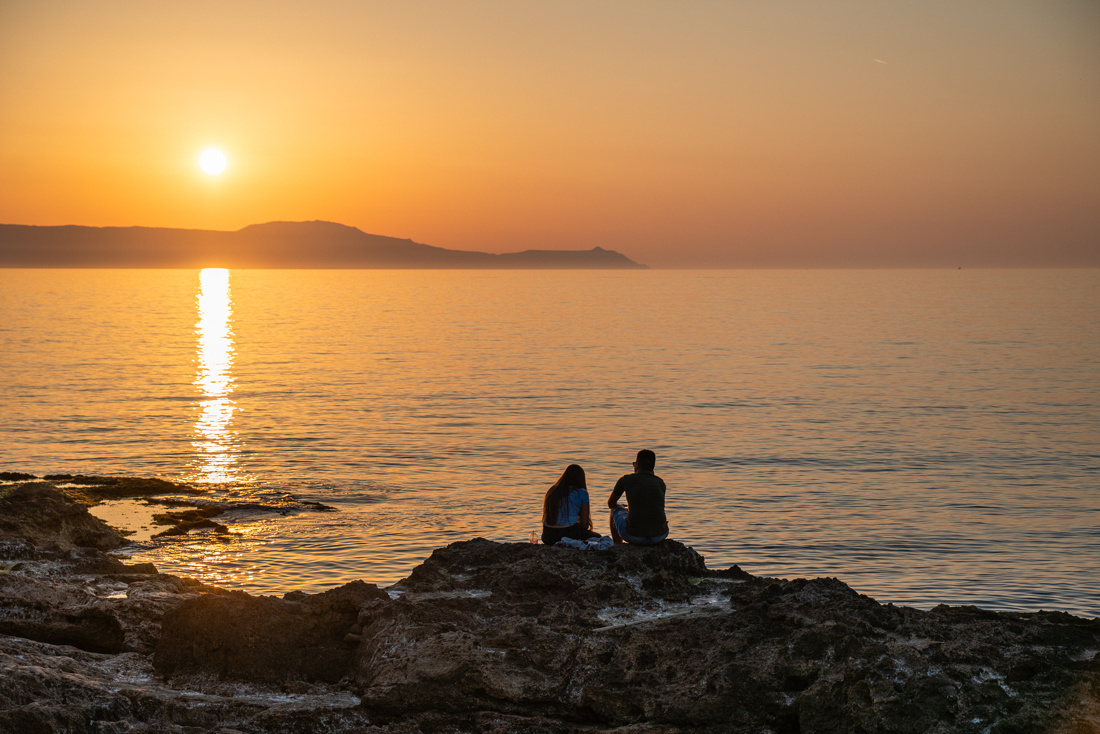 We strolled along the water waiting for the sun to set. 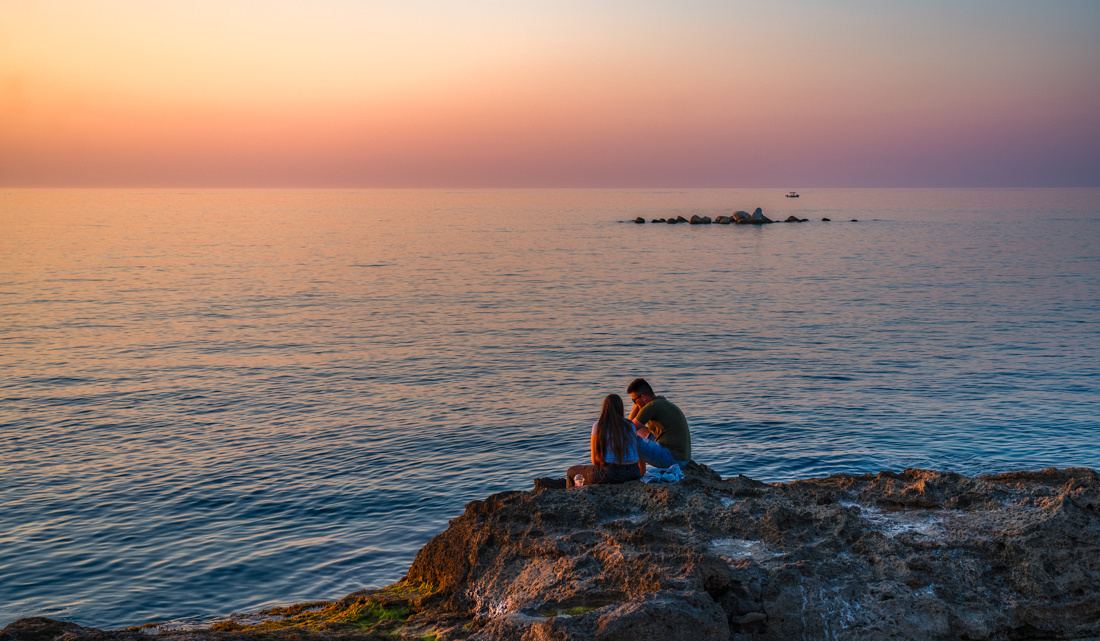 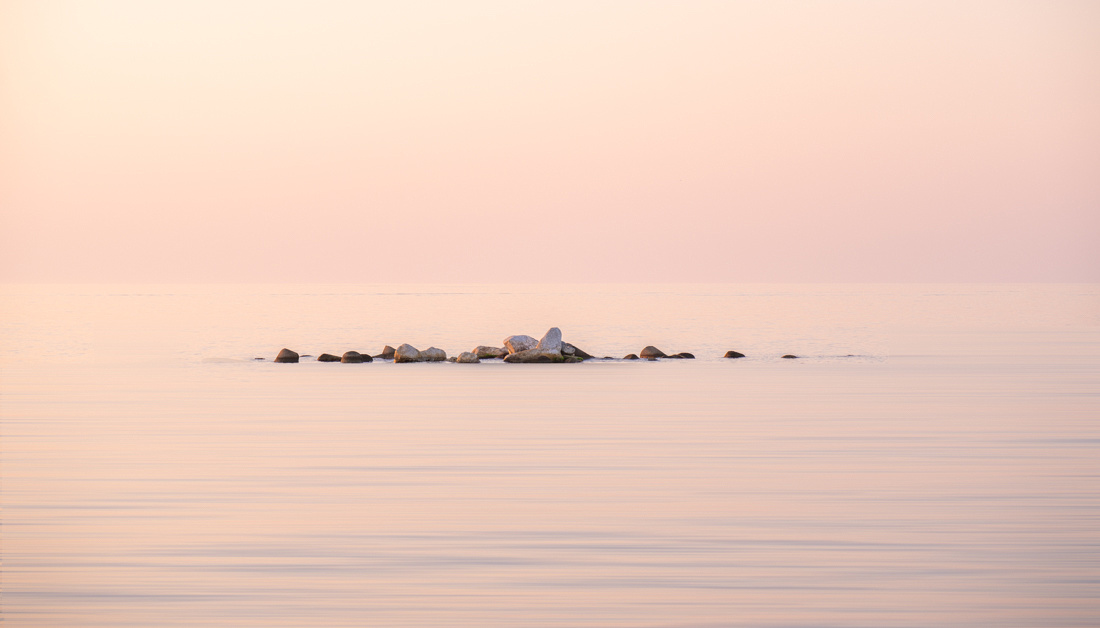 I liked this simple shot with lots of negative space.

We came across these women who allowed us to take their photographs.  Jane had spotted one of them actually climbing down the rocks and back up again. 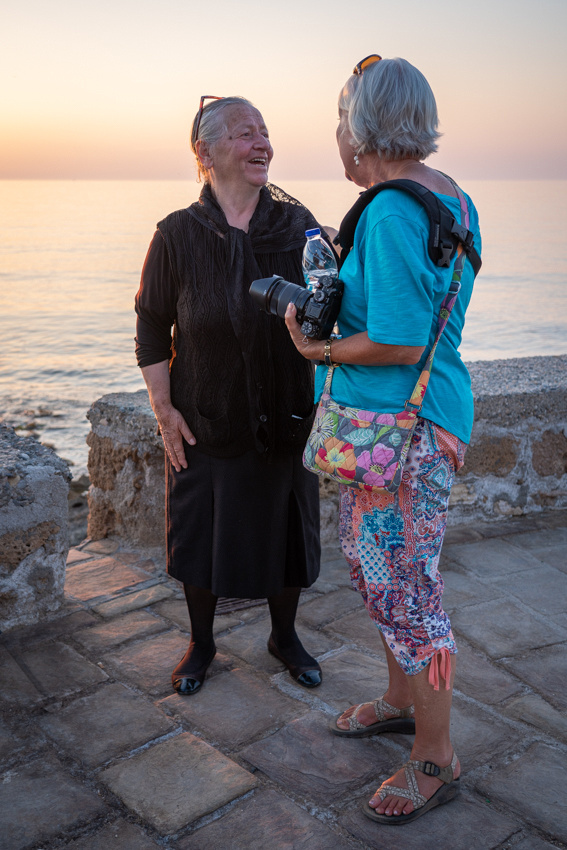 Jane and this woman seemed to have no problems communicating in spite of neither speaking each other's language. 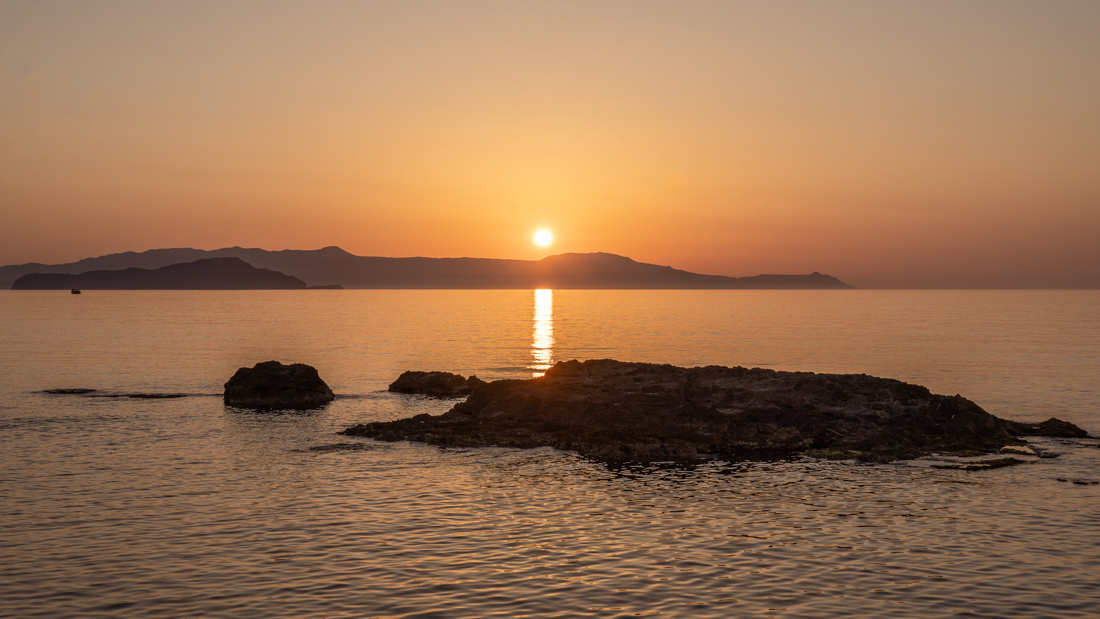 By now it was getting pretty close to sunset. 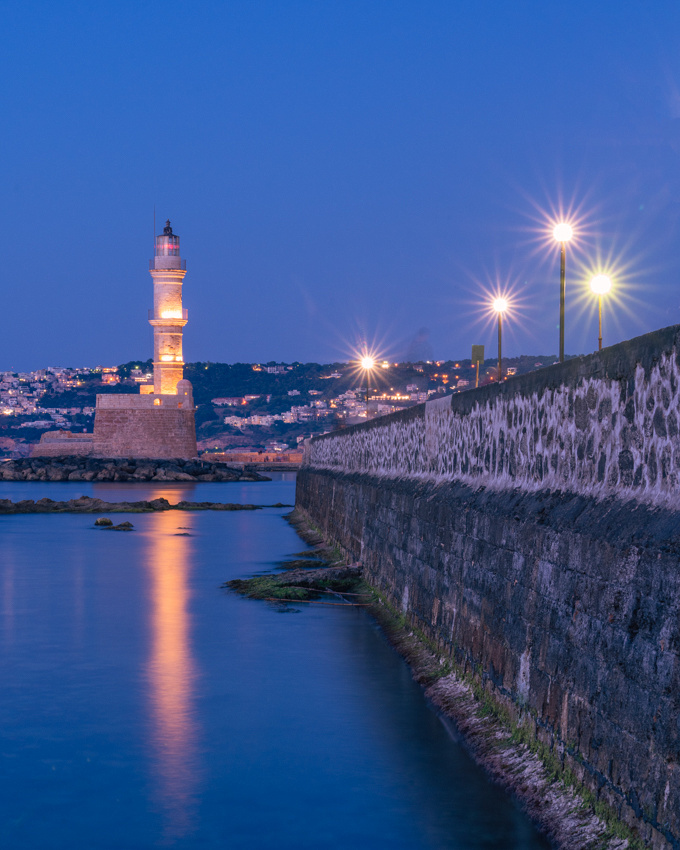 Chania's lighthouse.   The original Venetian lighthouse was built around the late 16th century to protect the harbour.  During the Turkish occupation, the lighthouse fell into disrepair and was eventually rebuilt between 1824 and 1832 during the Egyptian occupation.  The lighthouse was leaning badly due to bombings during WWII and earthquakes but it was extensively renovated in 2005 and now looks as good as new.

GWEN(non-registered)
enjoyed both flora and fauna. I remember a preparing to photograph a goat on Tabletop Mountain in South Africa. It quickly scrambled to a smooth platform rock formation and posed for several minutes so the whole group could get their cameras into action.
Thanks for taking me on this beautiful excursion, and for reminding me how blessed I am to have my own travel memories.
Bruce(non-registered)
The beautiful waters of the beach are beyond.
Thank you as always for treating me to some beauties of the world that I may never have seen.
Keep well.
Hetty(non-registered)
What a beautiful place! The beach and the turquoise water just amazing. Don’t we all wish we could be there right now? What a horror to watch Laurie fall down the cliff. Heart stopping. So glad he is ok. As always amazing pics.
Maureen Nilsson(non-registered)
As usual it's hard to pick favourites but I love the simple one with lots of negative space. That would be one for framing. But there are so many other beautiful shots as well like Balos Beach, the sunsets and the people shots
. Crete looks amazing. Nice work Marsha.
Jane Jamison(non-registered)
Love the soft pastel shot with the rocks and lots of negative space. Well done!! I'll never forget our "scare" on that cliff when we thought we were losing Laurie for good!!