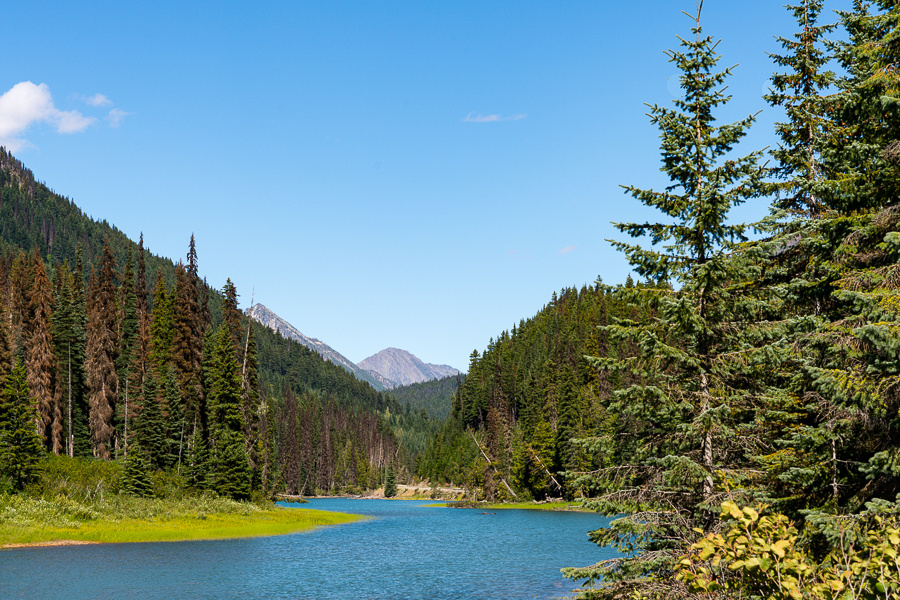 Ralph, Katie and I spent two months in Vancouver (summer of 2017).  We had a wonderful time visiting friends and relatives.  Eventually, it was time to head back to Toronto.  We wanted to see Glacier National Park in Montana on our way home but at the same time limit our days spent in the US due to immigration rules.  So on the way back to Ontario,   we  drove through British Columbia  to stay in Canada as long as possible.  The shot above was taken  in B.C.  on a day trip before we actually left for Toronto. 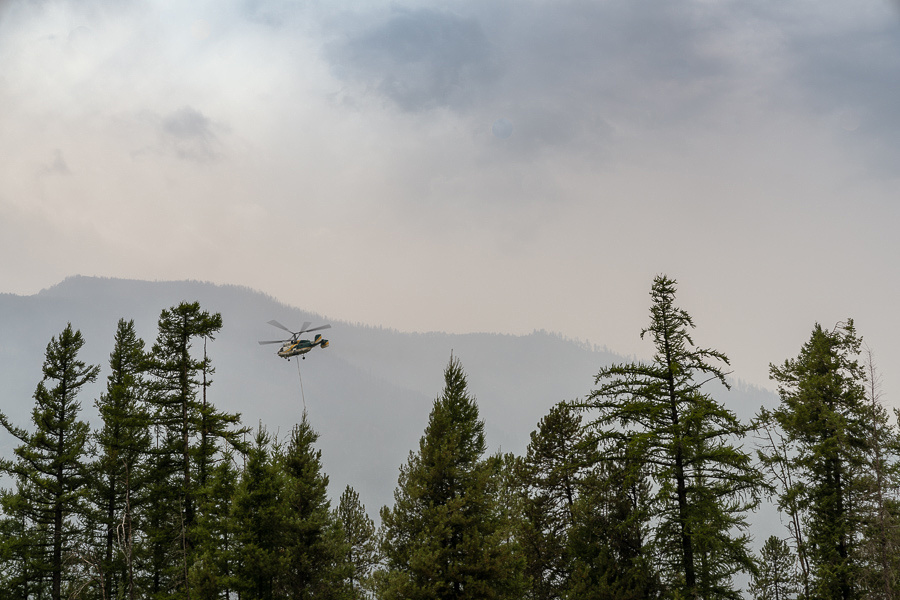 This was definitely the summer of forest fires.  We were surrounded by them on our way to Glacier National Park.  While we were in Vancouver, there were many smoky days. 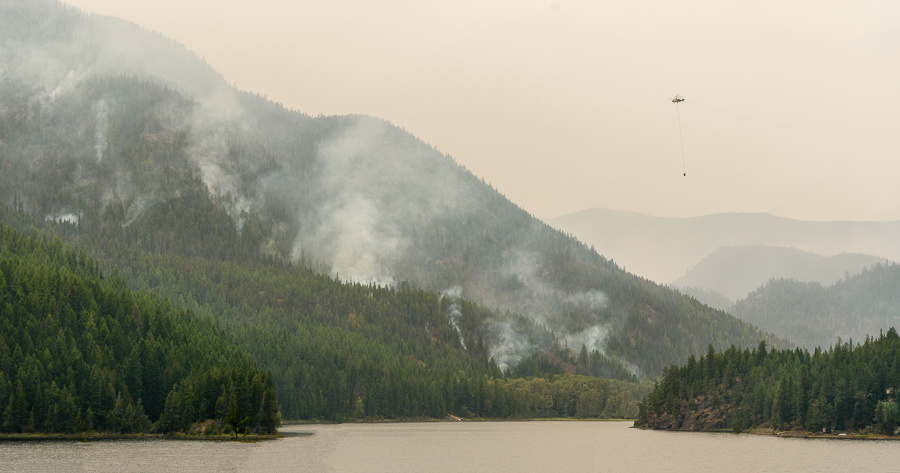 The helicopters pick up water from the lakes and then dump in on the fires.  It was pretty interesting to watch. 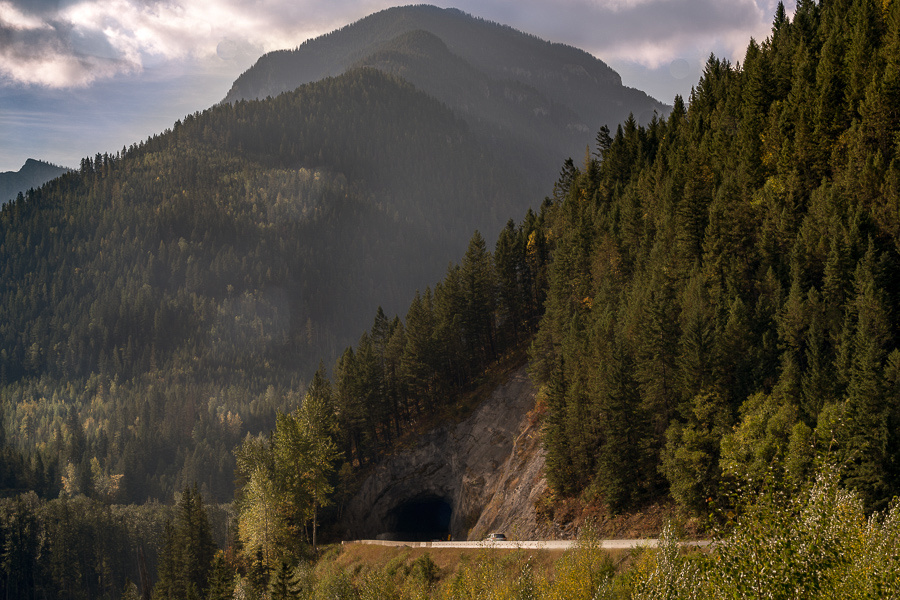 The scenery was still pretty nice in spite of the smoky conditions. 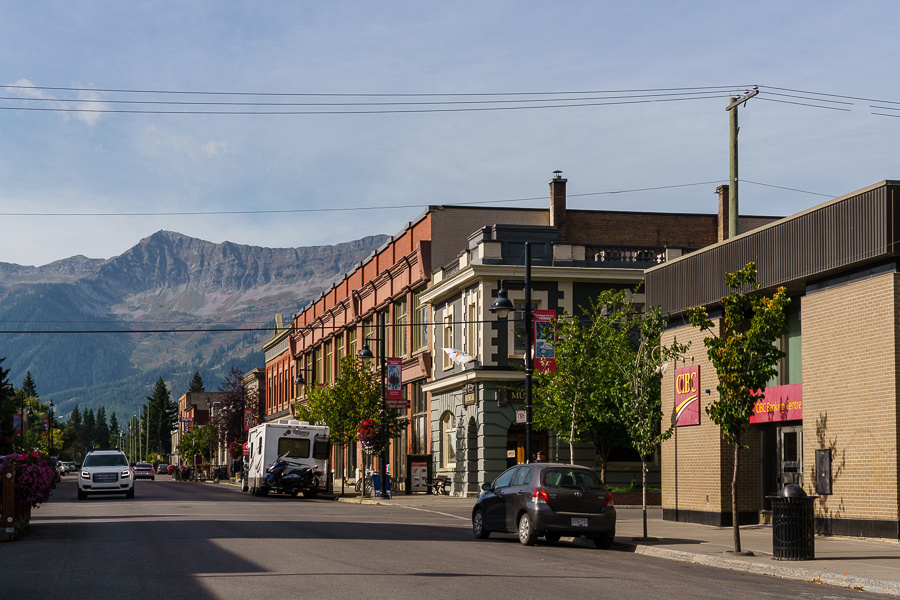 Just before crossing into Montana, we stopped in Fernie B.C.  for a walk. This is a photo of downtown Fernie, looking south.    The town is fully encircled by the Rocky Mountains.   Fernie, like many single-industry towns,  went through many boom and bust cycles throughout the 20th century, mainly tied to the price of coal.  Today Teck Resources operates five open-pit mines.  Fernie Alpine Resort is close to the town and is known for its high annual snowfall and for its powder skiing. 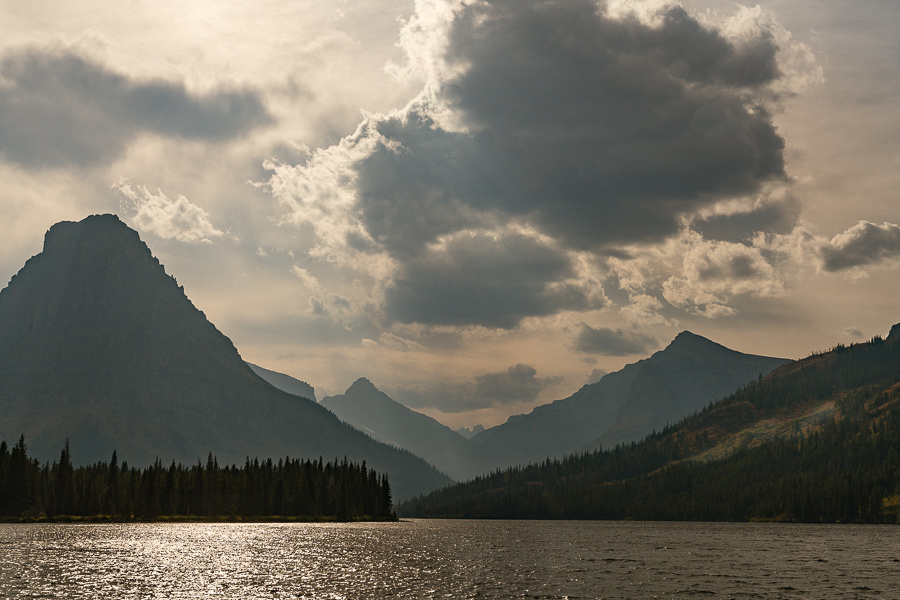 A view from inside Glacier National Park, Montana.   This photo is of Two Medicine Lake.  Glacier National Park is a national park located in Montana, on the Canada-United States border with the Canadian provinces of Alberta and British Columbia.   This park is made of up over 1 million acres and includes parts of two mountain ranges, over 130 named lakes, more than 1,000 species of plants and hundreds of different types of animals.

The region that became Glacier National Park was fist inhabited by Native Americans.  The park was established on May 11, 1910.  I had heard some great things about the park but I was a bit disappointed.  It turned out a lot of the park was closed due to the firest fires. 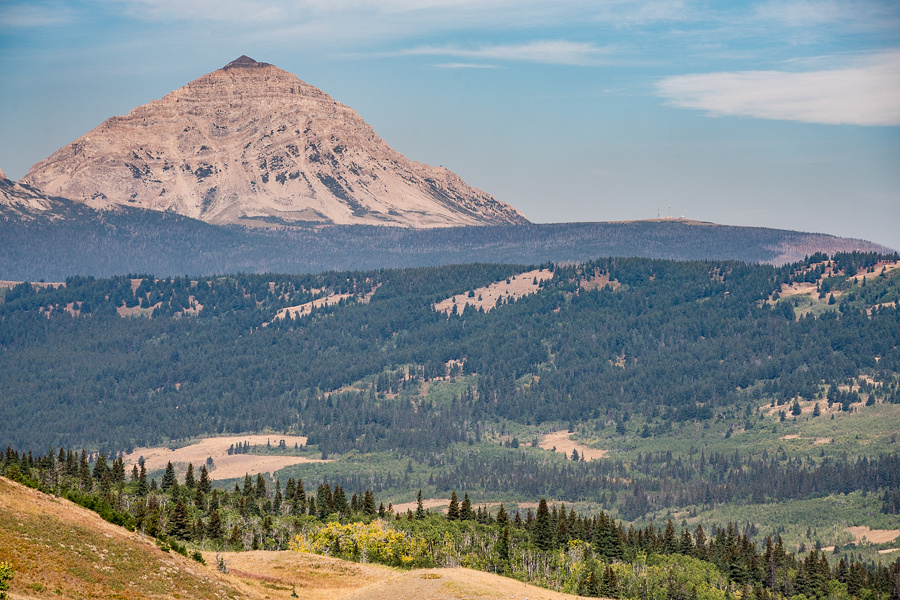 We drove on "Going-to-the-sun Road" in the park.  This scenic road is the only road that traverses the park, crossing the Continental Divide through Logan Pass at an elevation of 6,646 feet (2,026 m) which is the highest point of the road.  Construction began in 1921 and was completed in 1932.    The road spans the width of the park between the east and west entrance stations and is approximately 50 miles (80km) long.   Unfortunately, due to all of the forest fires some of the road was closed as was quite a bit of the park.  So we were quite limited in what we could actually see on this trip.  The entrance which was closest to where we were staying was closed which meant every time we wanted to go to the park, it was about a 1 1/2 hour drive.  Of course the drive was beautiful but it ended up limiting our time in the park since we wanted to be back before dark.  We ended up just staying for a couple of days and visiting the park twice. 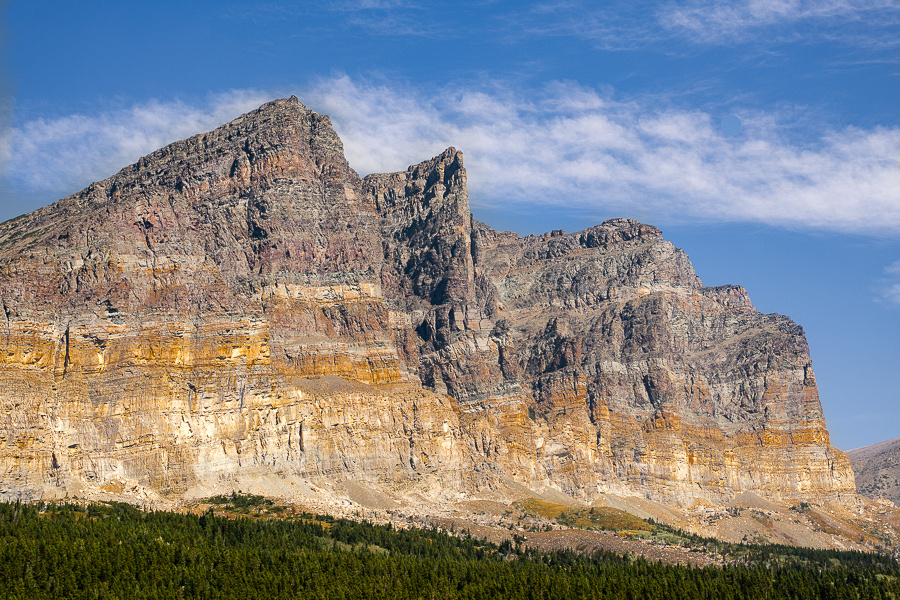 This was one of the few locations that was somewhat clear of the smokey conditions. 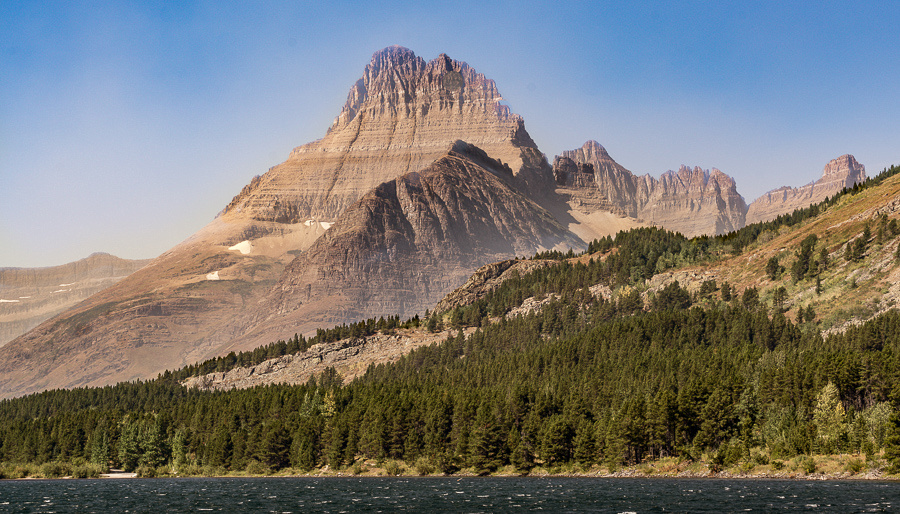 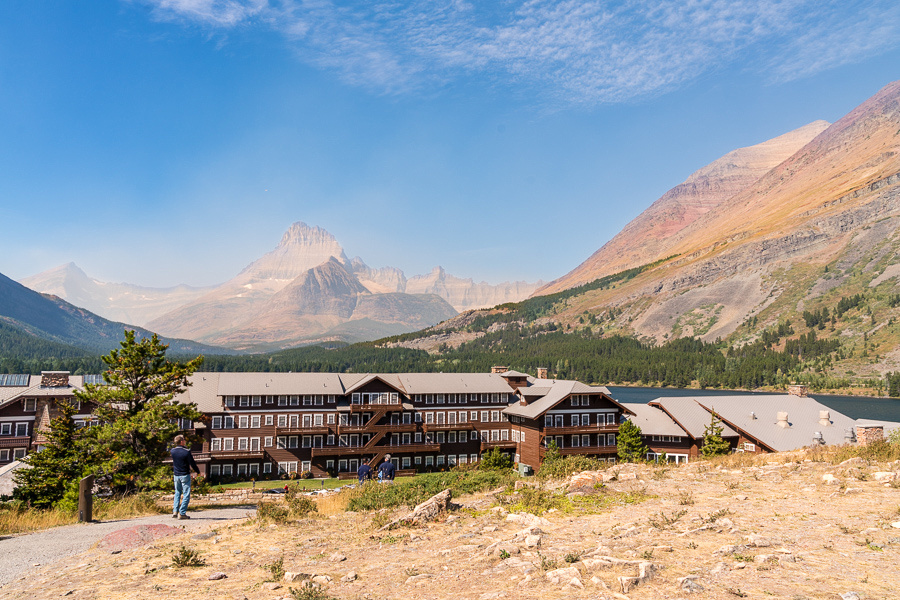 Many Glacier Hotel is located in the northeastern area of Glacier National Park, situated on the shores of Swiftcurrent Lake.  The hotel was built by the Great Northern Railway in 1914-1915. 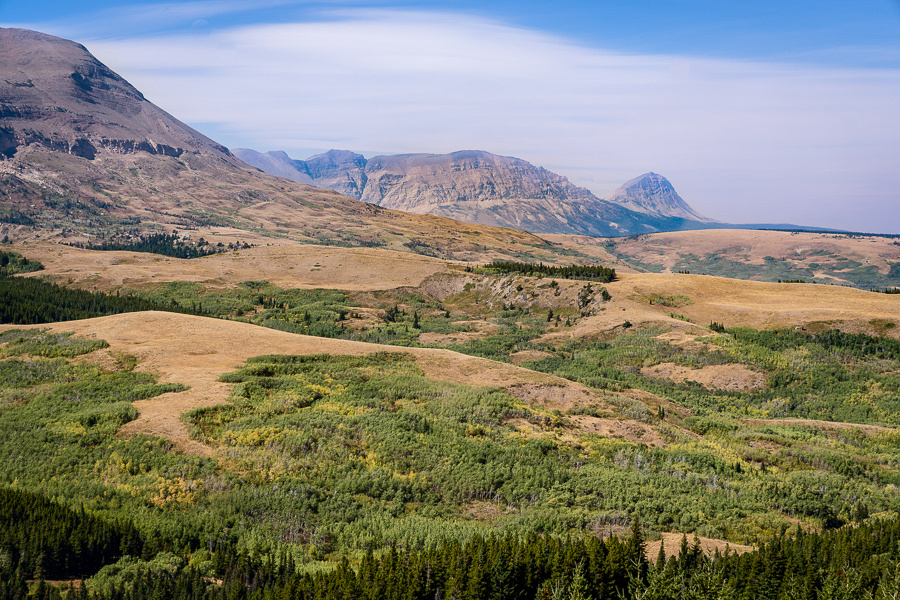 "Going on the Sun Road" had lots of beautiful places to stop and photograph.  We really only saw a very small portion of the park due to the closures and our schedule.  It is definitely worth another visit.

Carol(non-registered)
So sorry I was late in commenting on your pics. I loved them and am interested in going to the park. Did you do any hiking And if so, was it strenuous?
James(non-registered)
Marsha,

In spite of the smoke and haze, you captured some beautiful scenery.
Wendy Fouks(non-registered)
Glacier National Park looks amazing. Too bad that last summer was rife with forest fires. I would love to stay at that hotel on the lake. It looks like you're really able to step back in time. The photos are great, as usual.
Lynn Muller(non-registered)
The west of Canada is gorgeous and you have shown us that with your pictures of this trip. Two years ago in Naples, Florida, the fires were bad. We could even smell it inside our home there. It's a scary thing for sure. Thanks for venturing in to the park and taking these lovely photos. I really appreciate your blog.L
Maureen(non-registered)
Glacier National Park is indeed beautiful. It's too bad there were so many closures and that you couldn't make full use of the Going to the Sun Road. I was fortunate to have driven that road end to end in the 80's and it was amazing. Your photos are beautiful and give us all a real feel for just how much smoke came from the forest fires this summer. Another great blog!
No comments posted.
Loading...
Subscribe
RSS
Recent Posts
Last evening in Chania Chania and Selton Litania Beach Chania and Balos Beach Sunrise in Chania and a morning visit to the market Rethymno's market and a visit to Anogia Village Early morning in the harbour of Rethymno and a visit to the Fortezza Fortress Crete, day 3 Crete, day 2 Crete Last day on Milos
Keywords
Croatia Crete Morocco Cuba alberta National Park galapagos Newfoundland France
Archive
January February March April May June July August September October November December
© Marsha Fouks