The southeastern face of Mount Rushmore in South Dakota's Black Hills National Forest is the site of four gigantic carved sculptures depicting the faces of U.S presidents, George Washington, Thomas Jefferson, Theodore Roosevelt and Abraham Lincoln.  Work on the project began in 1927 and was finally completed in 1941.  Over that time period, some 400 workers built the sculpture under dangerous conditions.  They removed a total of 450,000 tons of rock in order to carve out the heads.  Each head reaches a height of 60 feet (18 meters).  The four presidents were meant to be represented from the waist up but their was insufficient funding so the carvings came to a halt.  There was opposition to the project by local Native Americans and environmentalists objecting due to it causing a desecration of the natural landscape. 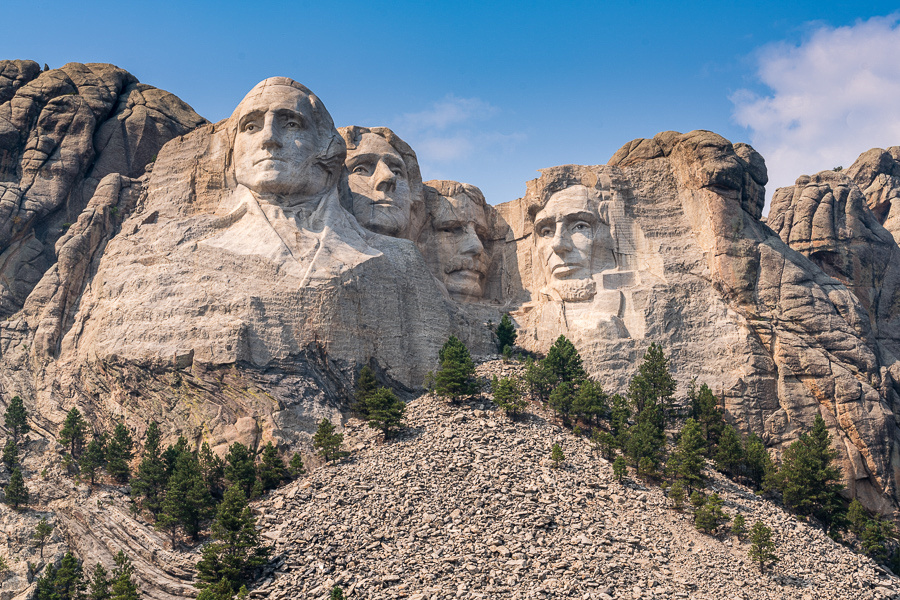 Mount Rushmore attracts more than 2 million visitors eery year and is one of the most popular tourist attractions in the United States.   Mount Rushmore was named for the New York lawyer Charles E. Rushmore, who traveled to the Black Hills in 1884 to inspect mining claims.  When he asked a local man the name of a nearby mountain, the reply was that it had never been named before but from now on would be known as Rushmore Peak (later Rushmore Mountain or Mount Rushmore).   A bill introduced in Congress in 1937 proposed that a carving of Susan B. Anthony's head be included, but fell through because of a rider on the existing bill mandating that federal funds be spent only on those carvings already begun. 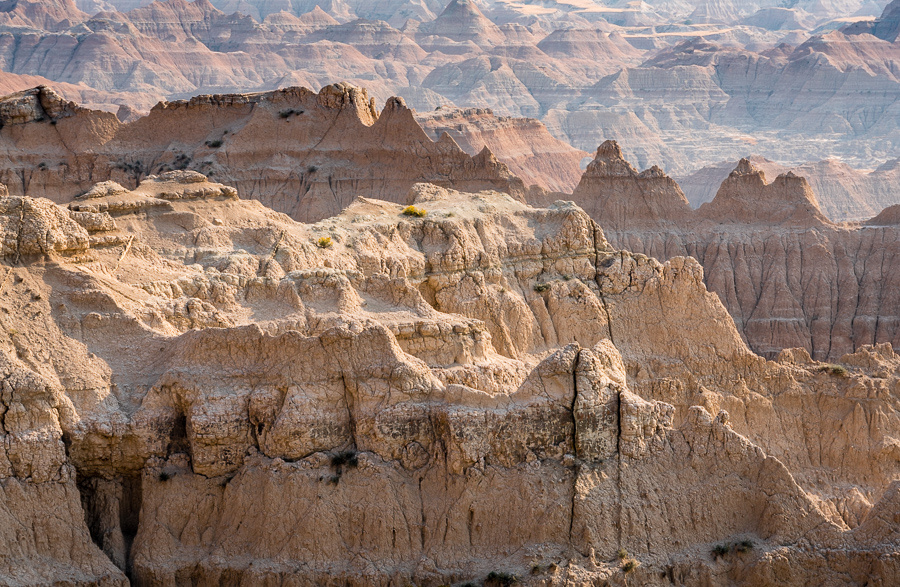 We had several choices for our route from Vancouver to Toronto.  While we were at Glacier National Park, we met some Canadians who told us that Badlands National Park in South Dakota was beautiful so we decided to go through South Dakota on our way back.  The hazy conditions from all of the forest fires were still around, however we did enjoy our drive through the park. 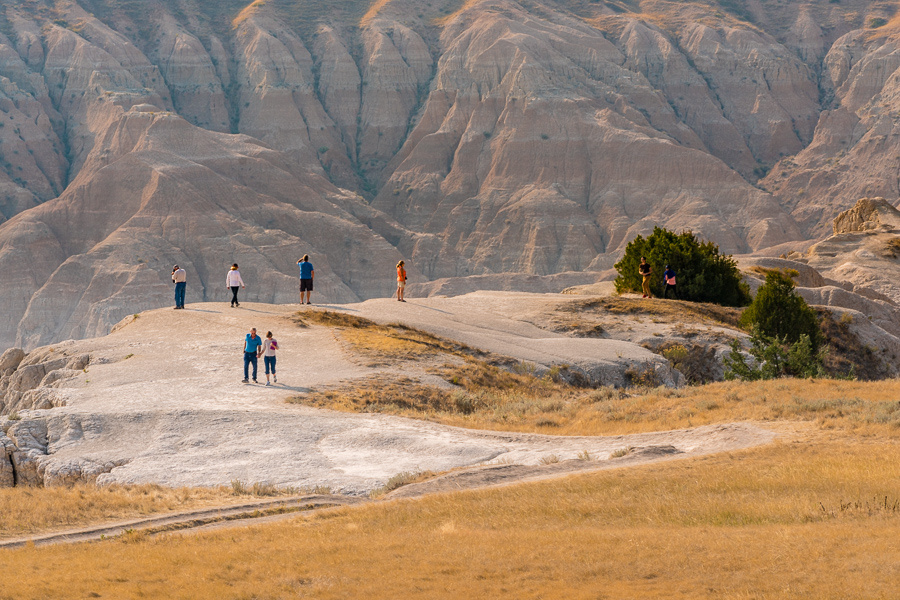 There were several pullouts on the road and places to get out and walk or hike. 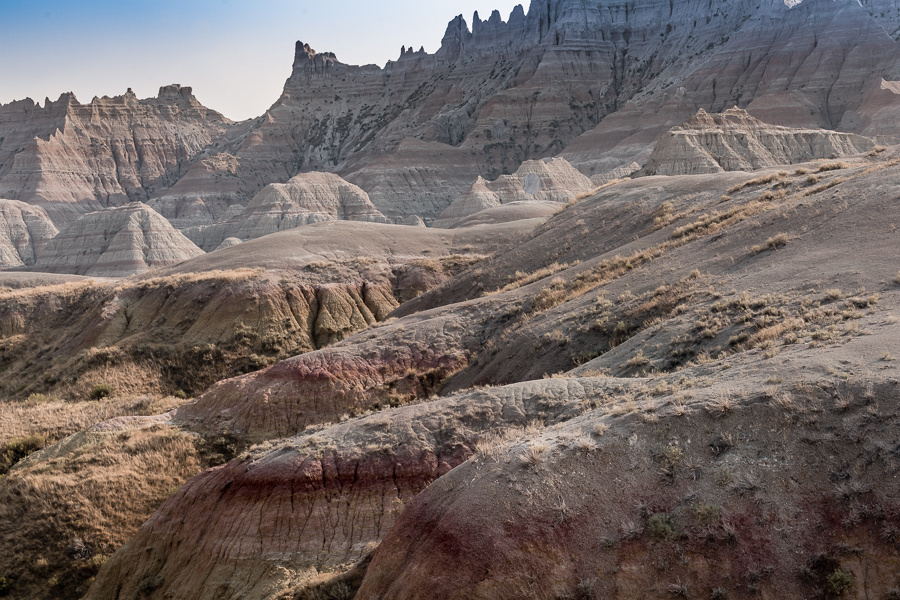 The geologic deposits in the park contain one of the world's richest fossil beds.  Ancient animals such as the rhino, horse and saber-toothed tiger once roamed here. 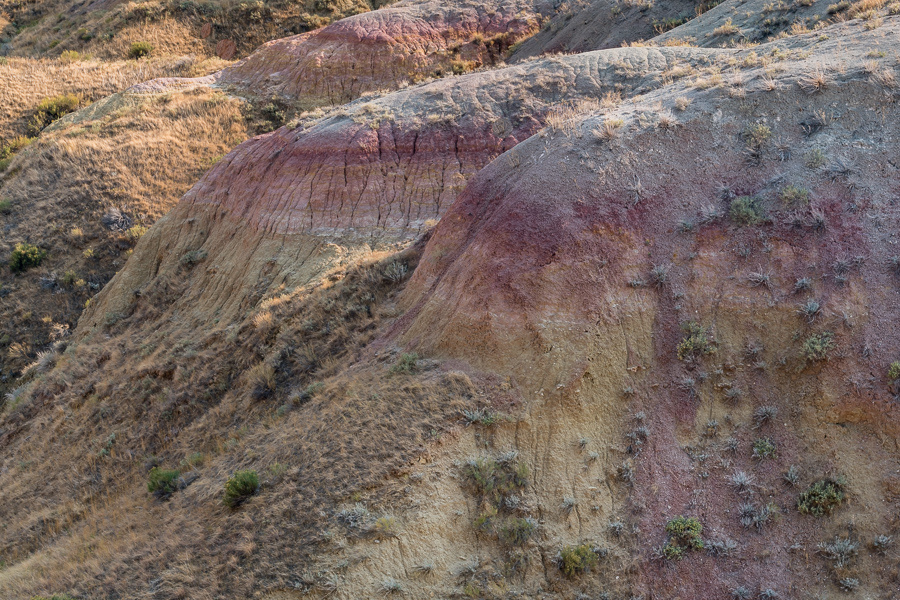 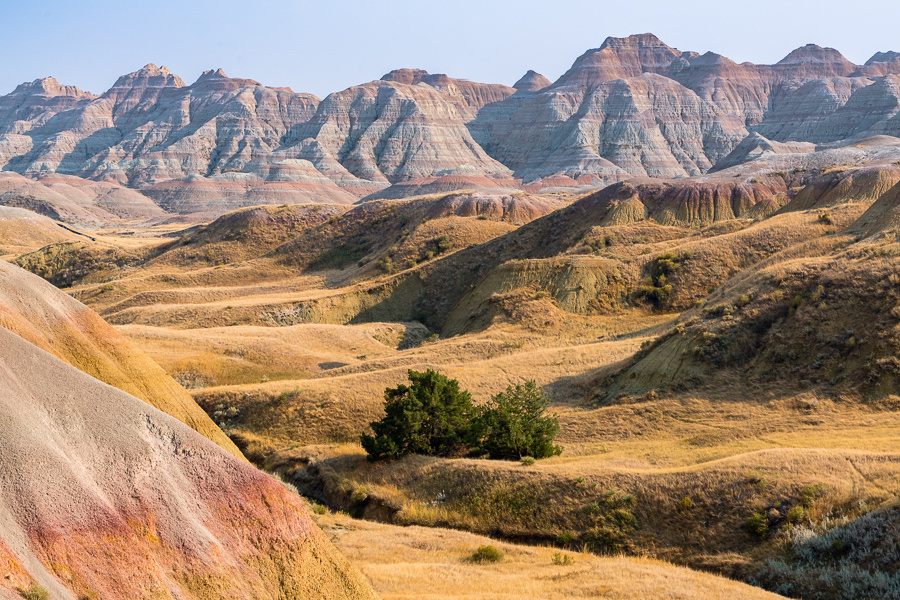 These badlands were somewhat similar to the Badlands in Alberta.  The Badlands Wilderness protects 64,144 acres of the park as a designated wilderness area.  Initially, the the park was authorized as Badlands National Monument on March 4th, 1929.  It was not established until January 25, 1939.  It was designated  a National Park on November 10, 1978. 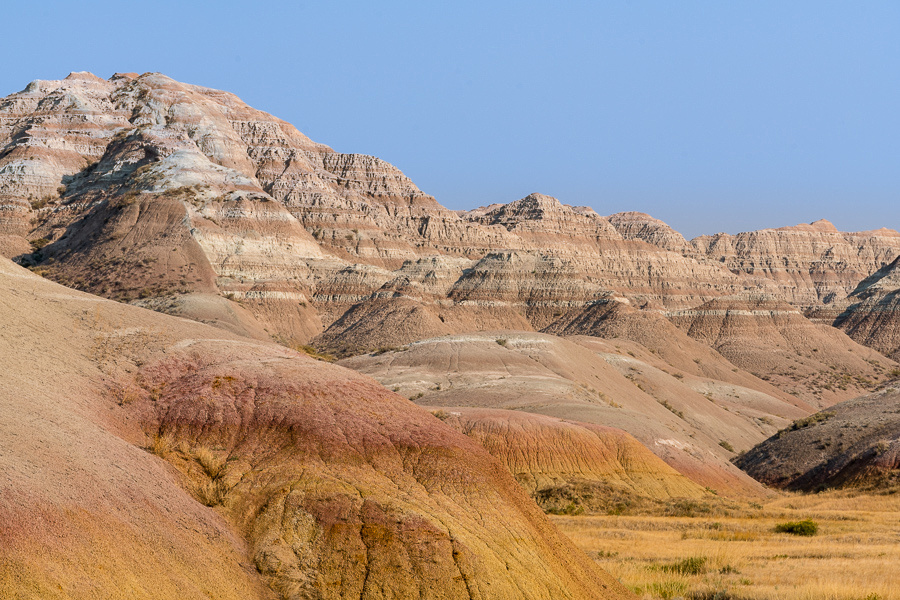 The park also administers the nearby Minuteman Missile National Historic Site.  Movies such as Dances with Wolves and Thunderheart were filmed in the park. 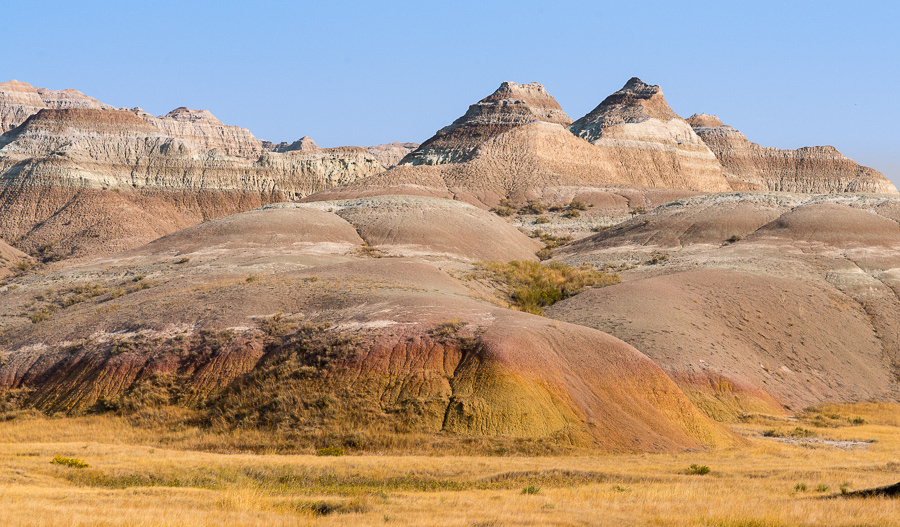 For 11,000 years, Native Americans have used this area for their hunting grounds.  Toward the end of the 19th century homesteaders moved  into South Dakota.  The U.S. government stripped Native Americans of much of their territory and forced them to live on reservations. 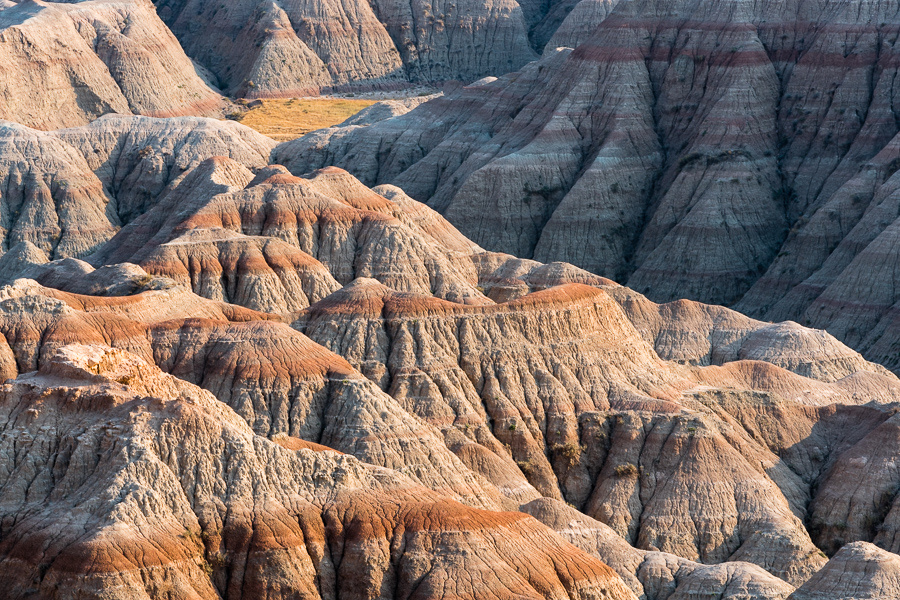 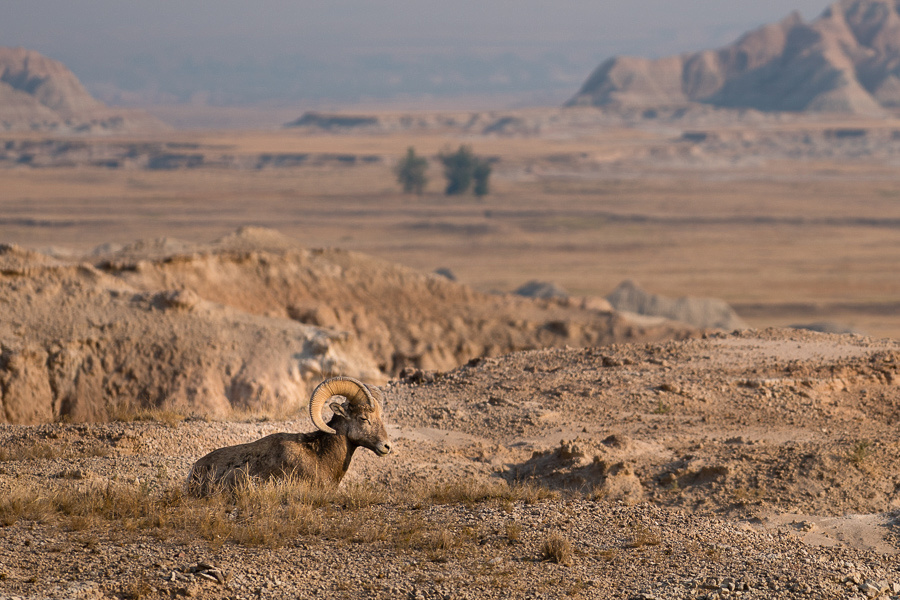 We stopped to photograph this big-horned sheep. 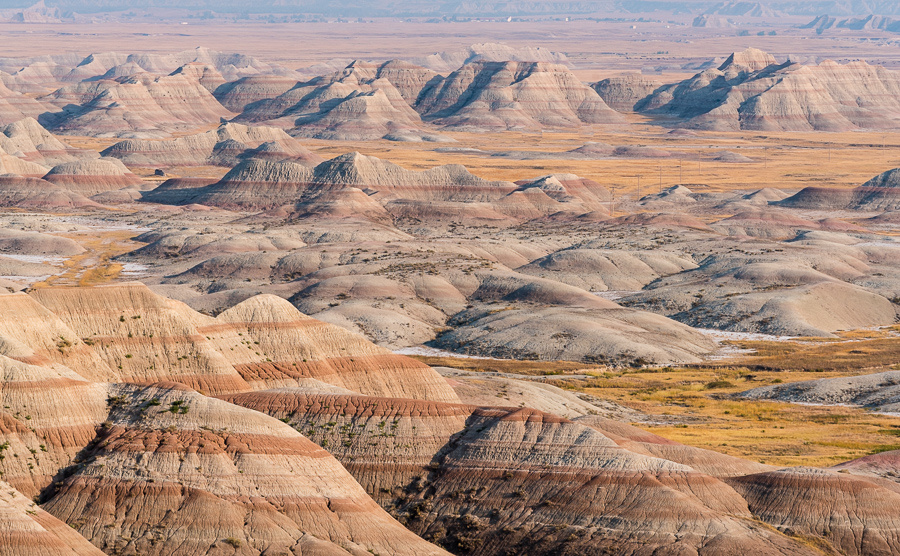 The park was full of sharply eroded buttes, pinnacles and spires. 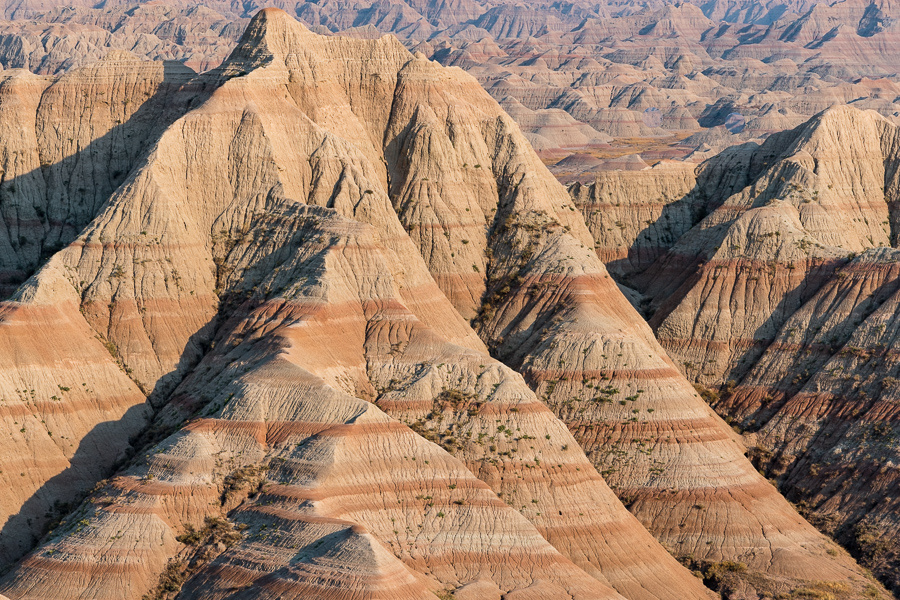 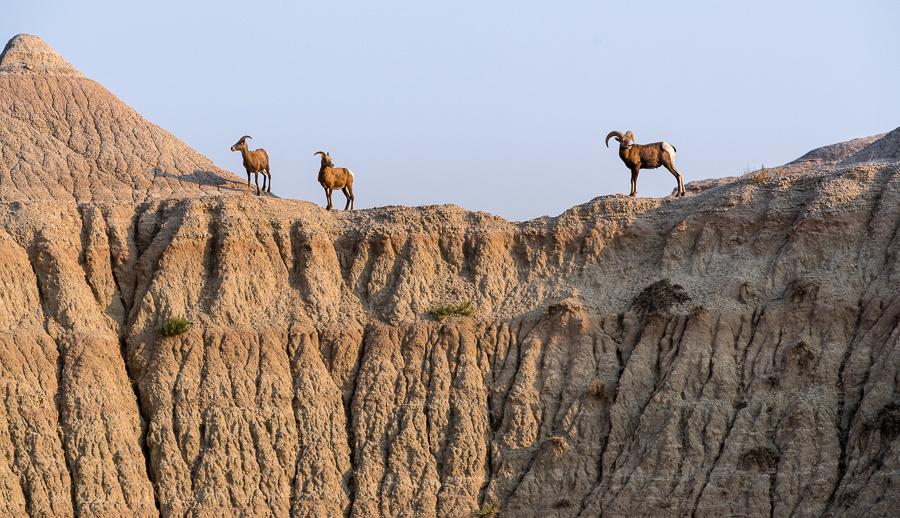 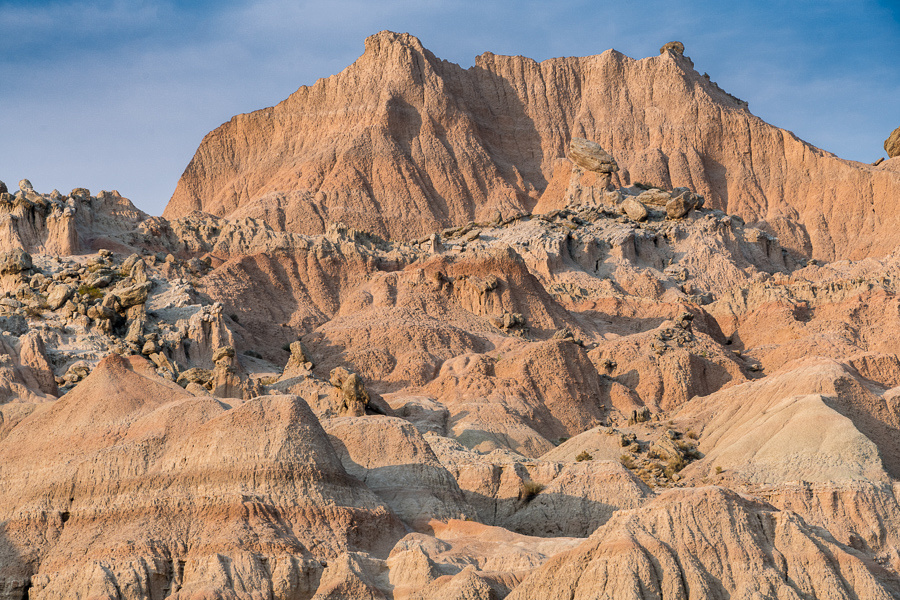 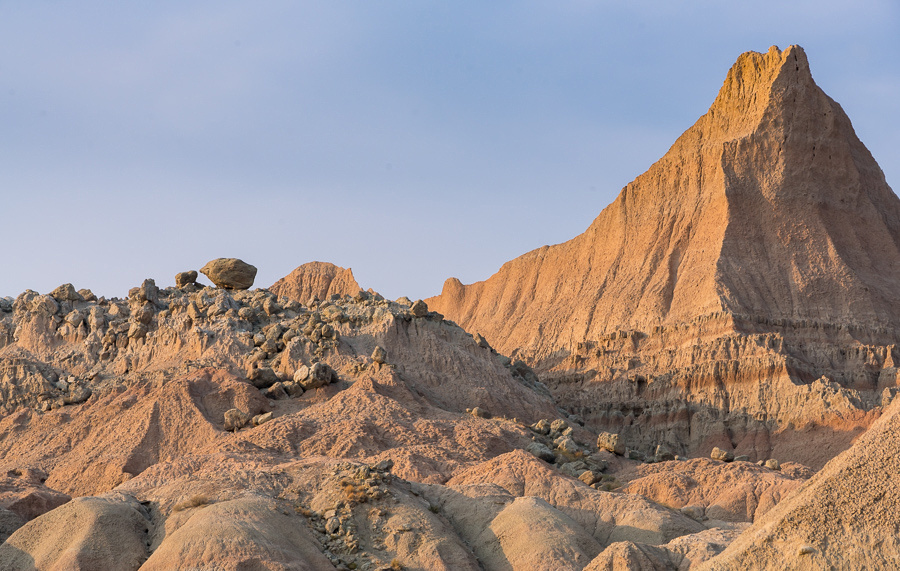 We only drove through the park for part of one day.  Our plan had been to return the next day but we woke up to pouring rain and foggy conditions so we continued on our way. 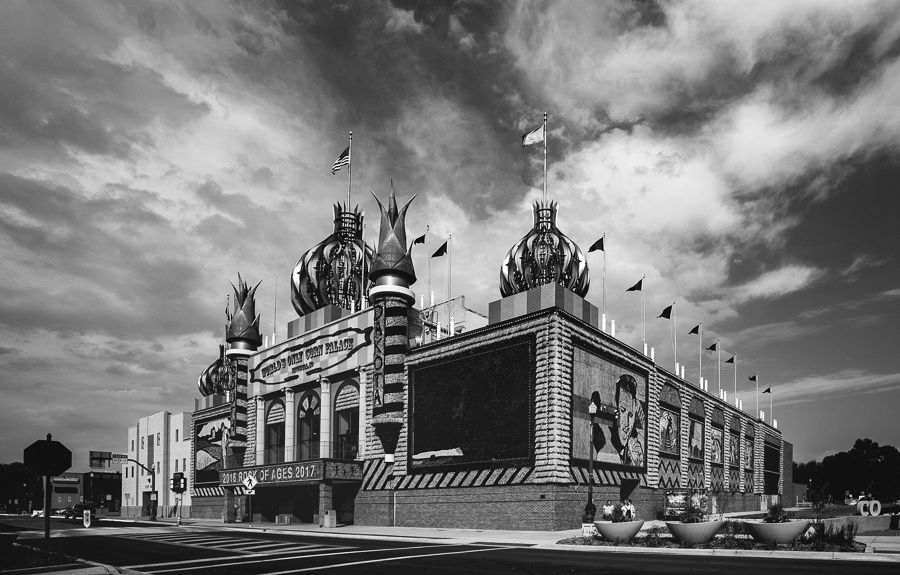 One of our last stops in South Dakota was to visit the Corn Palace which is  advertised as the World's only corn palace.  The Moorish Revival building is decorated with crop art; the murals and designs covering the building are made from corn and other grains and a new design is constructed every year.  Each year it is visited by anywhere from 200,000 to 500,000 people.  The Palace serves the community as a venue for concerts, sport events, exhibits and other popular community events.  After leaving South Dakota, we were on a mission to get back to Toronto as soon as possible so we really didn't make too many other stops. The reason for the rush to get back to Canada was because of the restriction of days allowed in the US and we would be spending five months in Arizona. 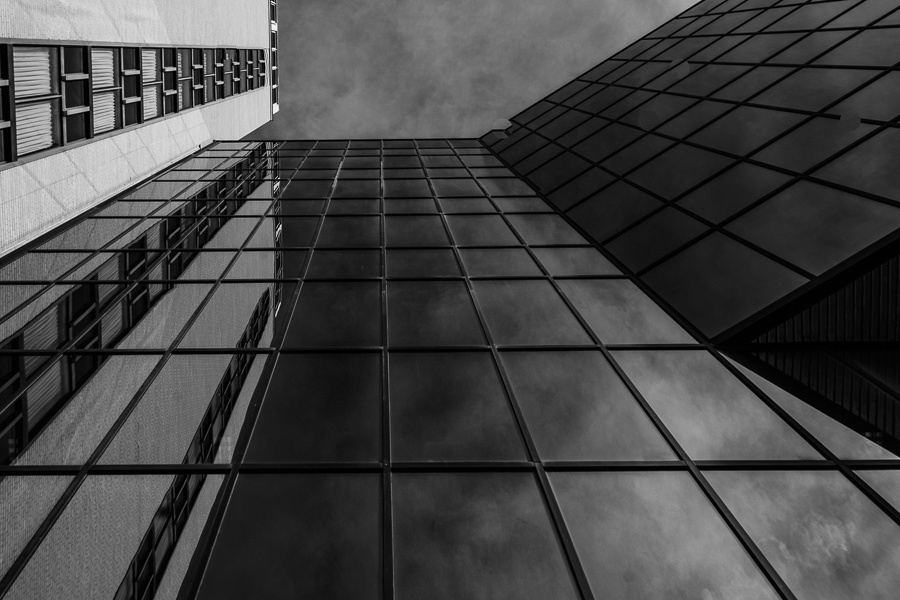 This photo was taken as we walked through the Mayo Clinic in Rochester, Minnesota.   Mayo Clinic is regarded as one of the United States' greatest hospitals.  After leaving Rochester it took us another 2 days to arrive in Toronto.  So our total drive home took us about 12 days.  Two days in B.C. and another 10 days before arriving in Brampton.  We stayed in Brampton for about two weeks before heading to the east coast of Canada.

Irena(non-registered)
Beautiful !
Lynn Muller(non-registered)
There are some really beautiful shots here, Marsha. The shots of Mount Rushmore are very clear. Loved the shots of the badlands, especially with the wildlife. You chose a great path to come back on.
Maureen(non-registered)
I love the first and second photos of the presidents. The rock formations are really amazing in all the photos. You really know how to capture the beauty of the area. Nice work Marsha.
Wendy(non-registered)
I love all these photographs. The first one of the presidents and the 10th picture of the tops of the hills with the orange bands running through them are my favourite. It was a great photographic opportunity. The details in each picture are amazing.
No comments posted.
Loading...
Subscribe
RSS
Recent Posts
Wanaka Queenstown and Glenorchy Moeraki Boulders and Milford Sound Penguins, Seals and Sheep Southern Alps, New Zealand Last evening in Chania Chania and Selton Litania Beach Chania and Balos Beach Sunrise in Chania and a morning visit to the market Rethymno's market and a visit to Anogia Village
Keywords
Croatia Crete Morocco Cuba alberta National Park galapagos Newfoundland France
Archive
January February March April May June July August September October November December
© Marsha Fouks