We arrived at Heraklion in the evening of June 3rd.  Unfortunately, there is no direct flight from Milos to Crete so we had to fly to Athens first and then wait for a flight to Heraklion.  After visiting Santorini and Milos, we were back to big city life. Heraklion is the largest city in Crete and was Europe's fastest growing tourism destination in 2017 with an 11.2% increase in international arrivals.  In 2018, the city had 3.4 million visitors.   The island of Crete is the largest and most popular of the Greek islands and the fifth largest island in the Mediterranean Sea. 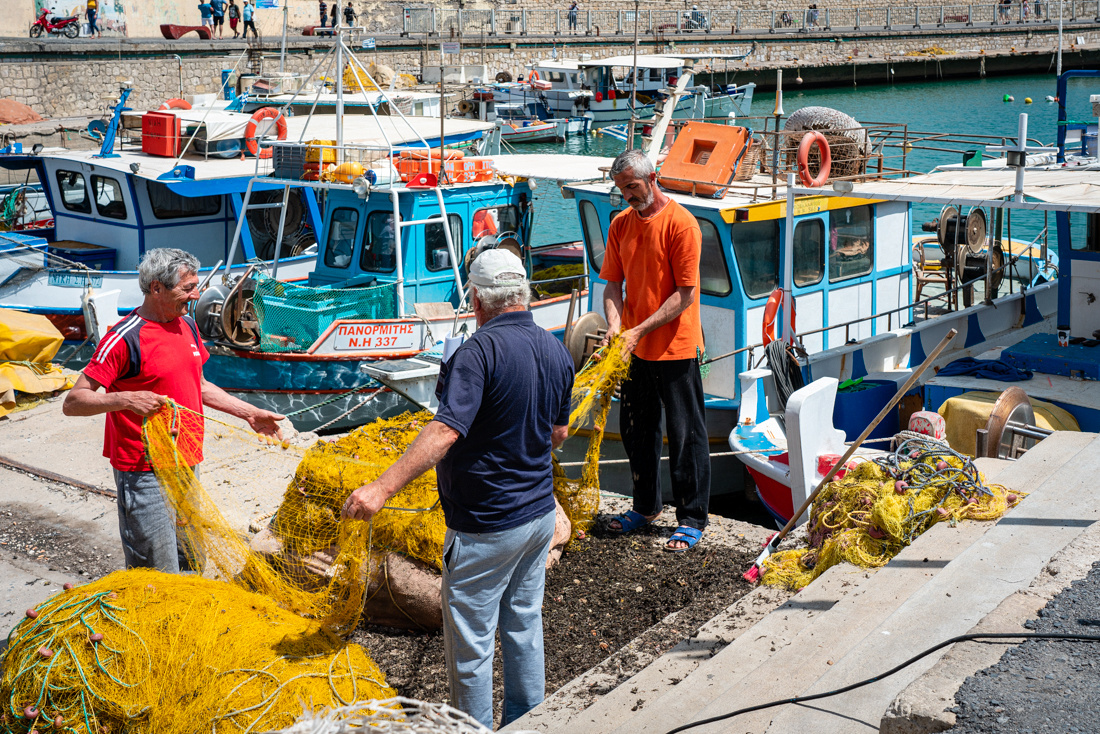 Our hotel was located on the main square so we were able to walk to the old town and the Venetian harbour.  We came across fisherman cleaning and checking their nets after returning from their fishing expedition. 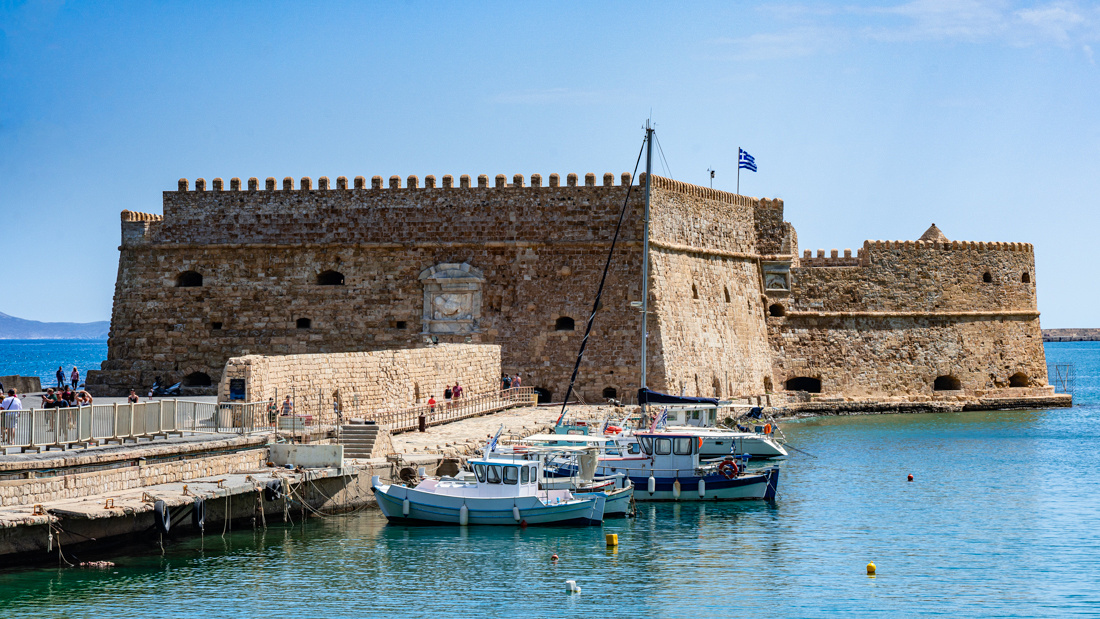 This structure is called the Koules or Castello a Mare (Fort on the sea in Italian).  It is a fortress located at the entrance of the old port of Heraklion, Crete.  It was built by the Republic of Venice in the early 16th century and is still in good condition.    The walls are up to 8.7m thick in certain places and it has three entrances.  The fort has 2 stories with a total of 26 rooms which were originally used as barracks, a prison, storage rooms, a water reservoir, a church, a mill and a bakery.  The fortress has been restored and is now open to the public for art exhibitions and cultural activities. 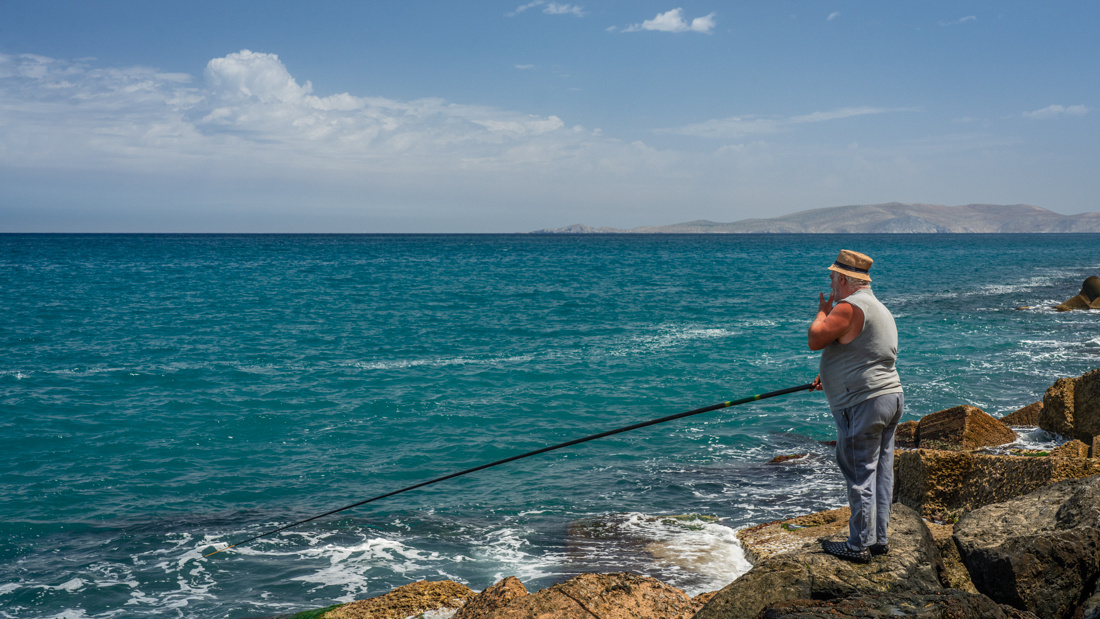 It was a beautiful, warm day for fishing. 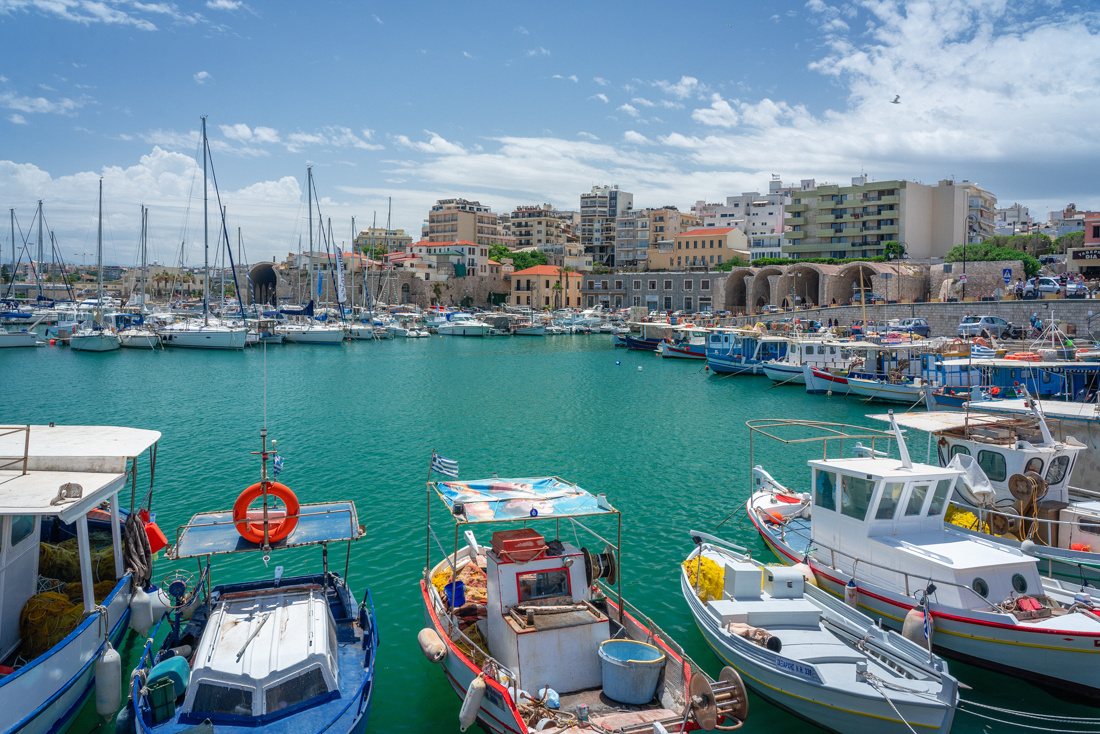 We walked along the walkway for quite a distance to get different views and enjoy the weather. 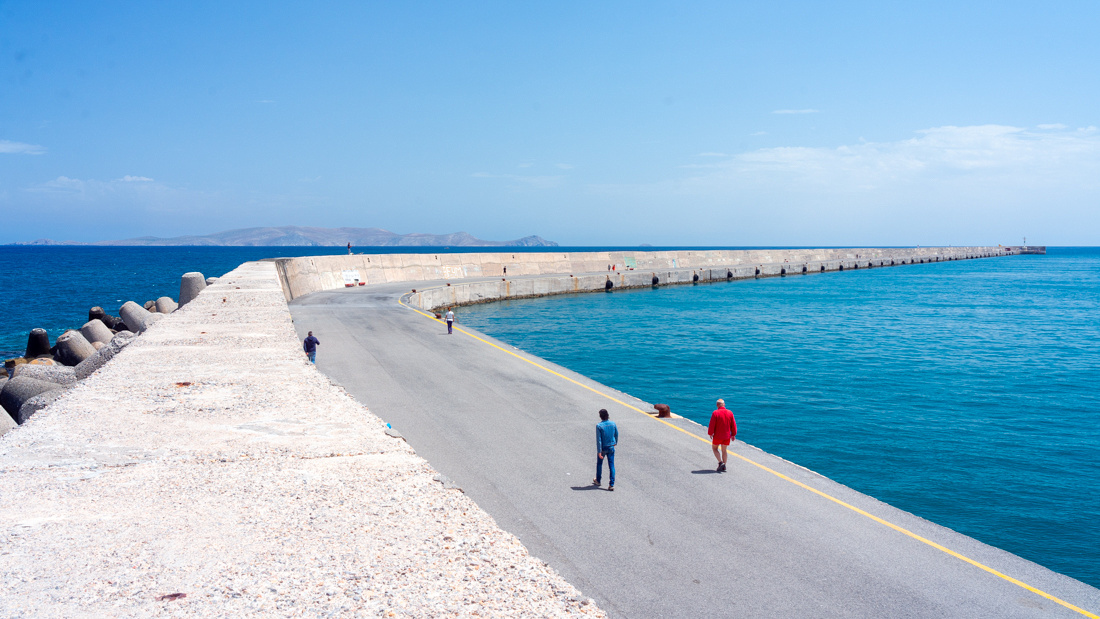 You can see just how far this walkway goes. 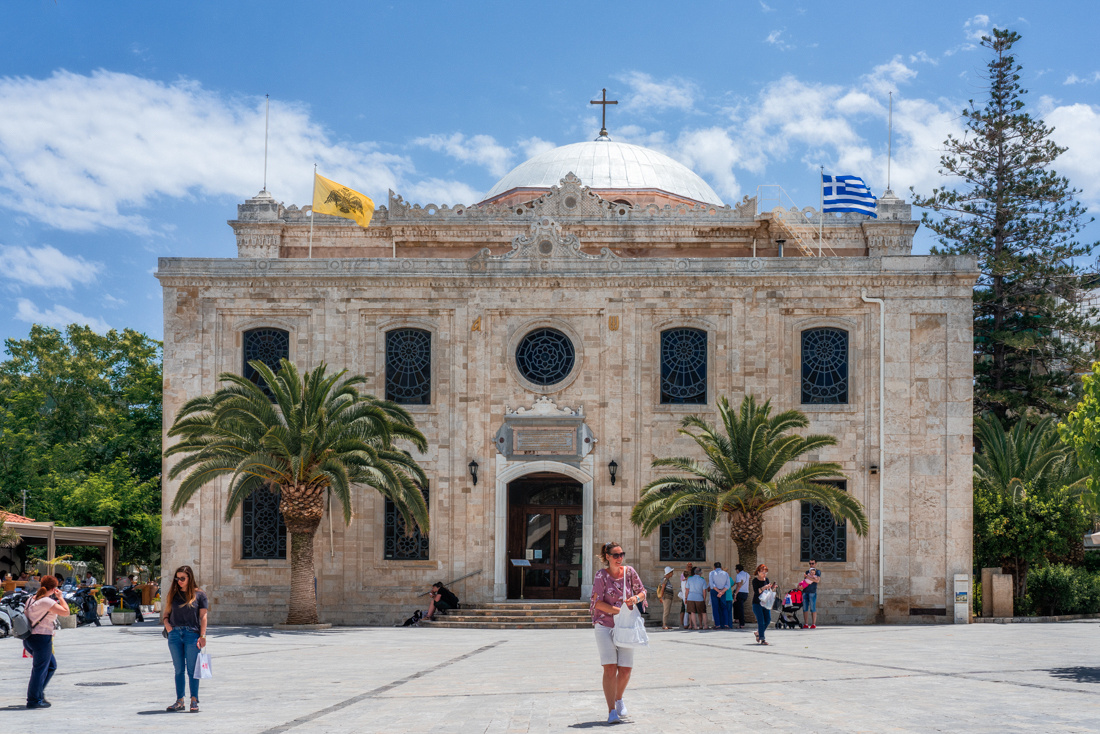 We ended up walking in the downtown area and the Lakkos district and having lunch along the way.  This building was the church of St. Titus.  The great earthquake of 1856 totally destroyed the church.  It was rebuilt as an Ottoman mosque.  The minaret of St Titus was demolished in the 1920's when the last Muslins left Heraklion with the exchange of population between Greece and Turkey. Today the church is an Orthodox Church dedicated to St Titus the Apostle. 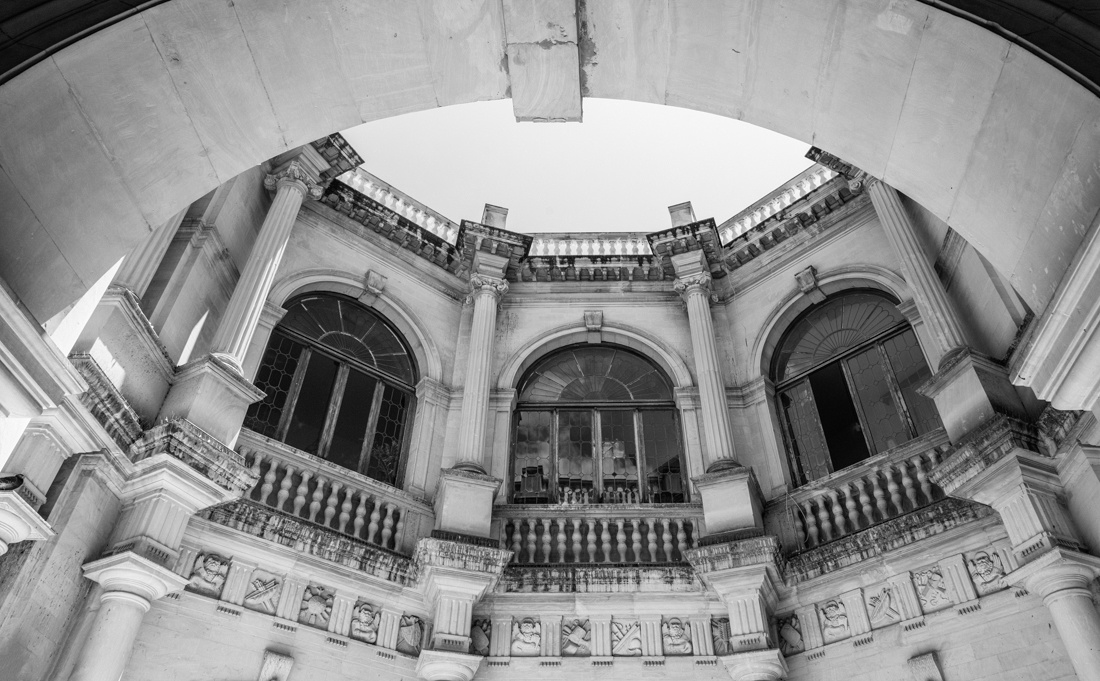 The old city hall.  The Loggia was an essential public building in every Venetian city.  The newly independent Cretan state proposed to use the building as an Archaeological Museum.  An earthquake made the building unsafe so that idea was abandoned.  In 1904, the first floor was demolished.  Following the end of the second world war, the restoration started again.  In 1987, this building was awarded the prize for the most successful restoration of a historical building. 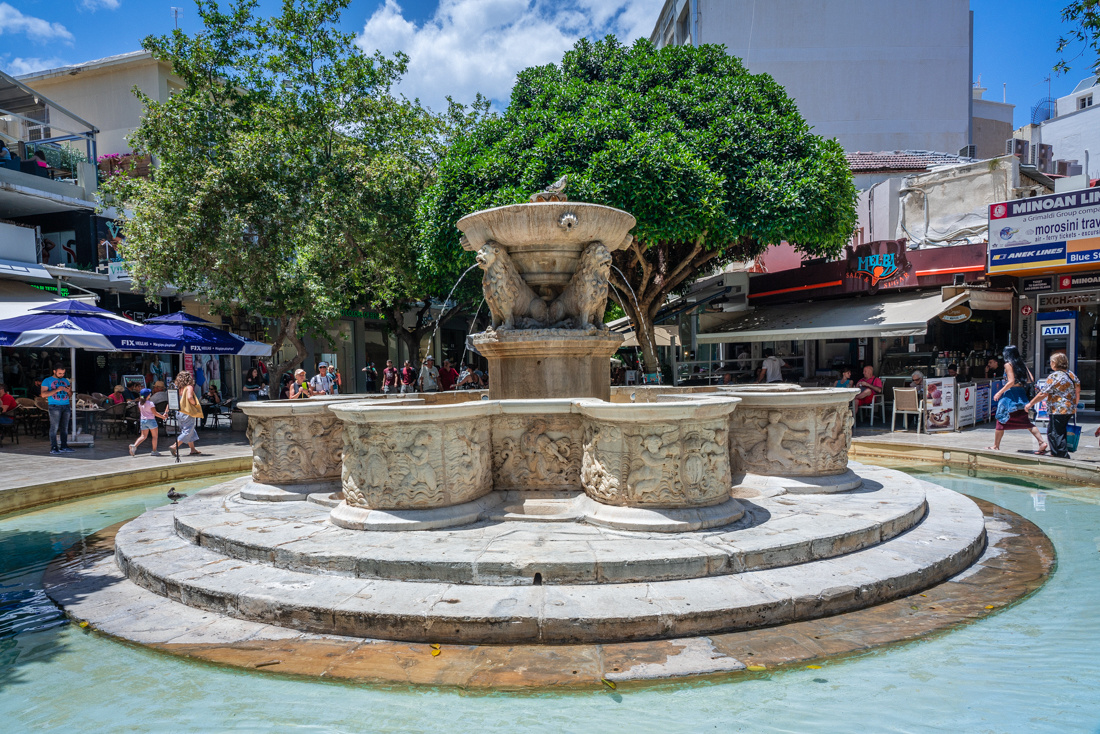 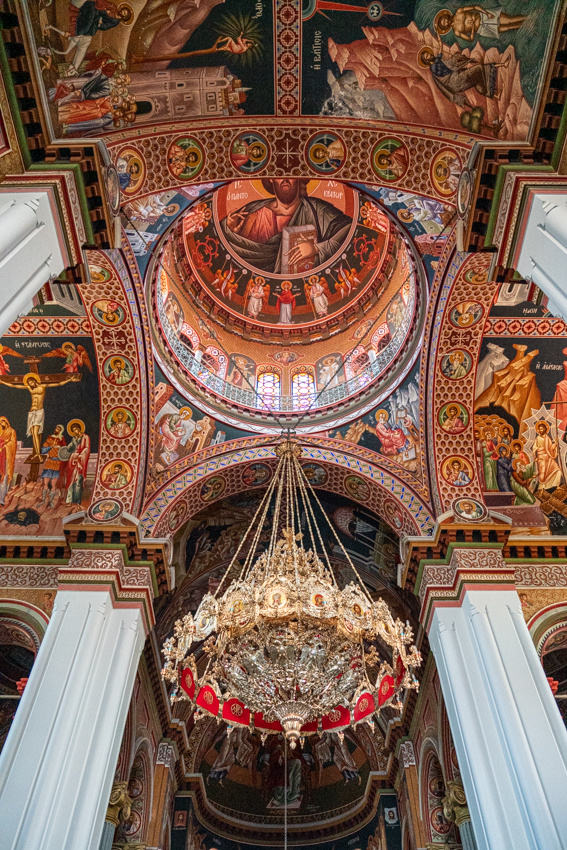 Inside the Agios Minas  Cathedral.  The church was full of very beautiful and ornate chandeliers. 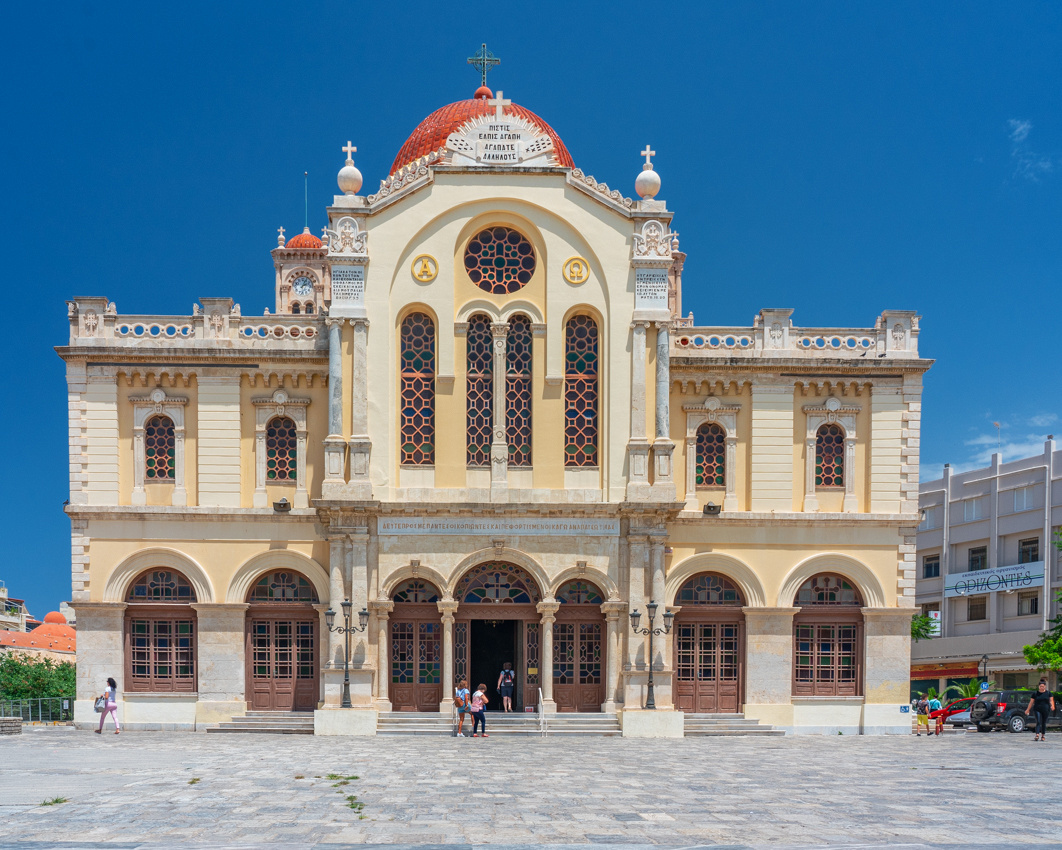 Agios Minas is a Greek Orthodox cathedral located in the centre of Heraklion and it is the patron saint of the city. 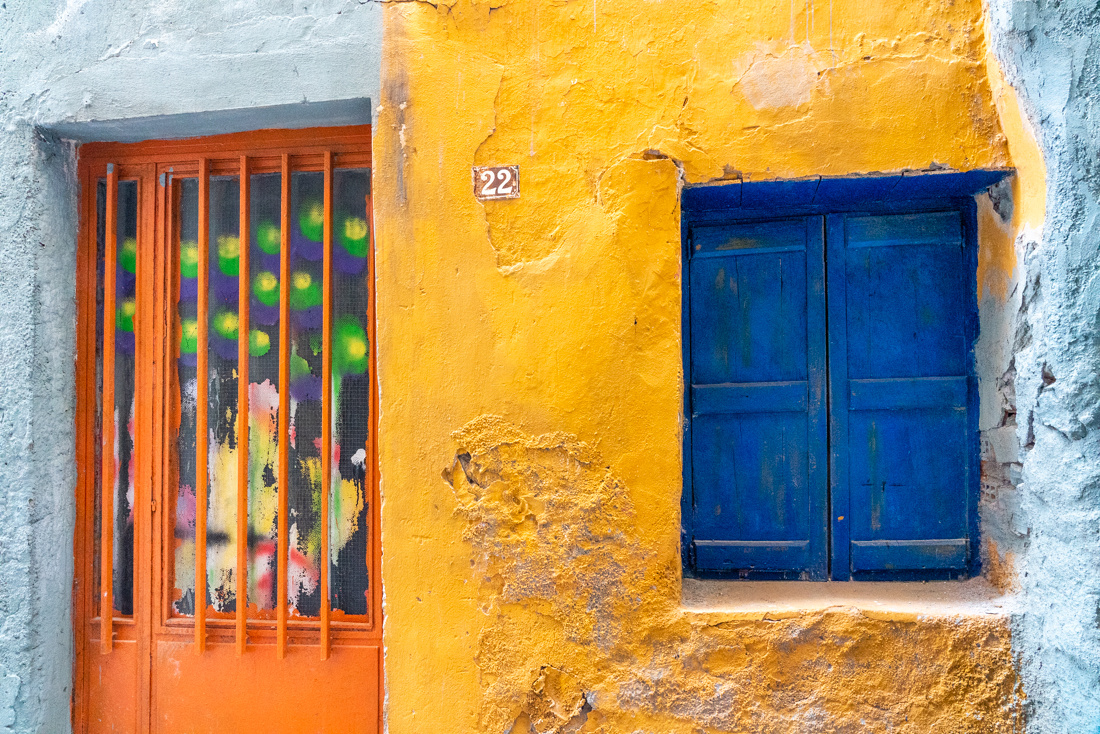 The area of Lakkos in Heraklion is one of the most up and coming districts in the city.  After a long period of neglect and public unawareness, it is once again full of life, art and interesting cultural events. 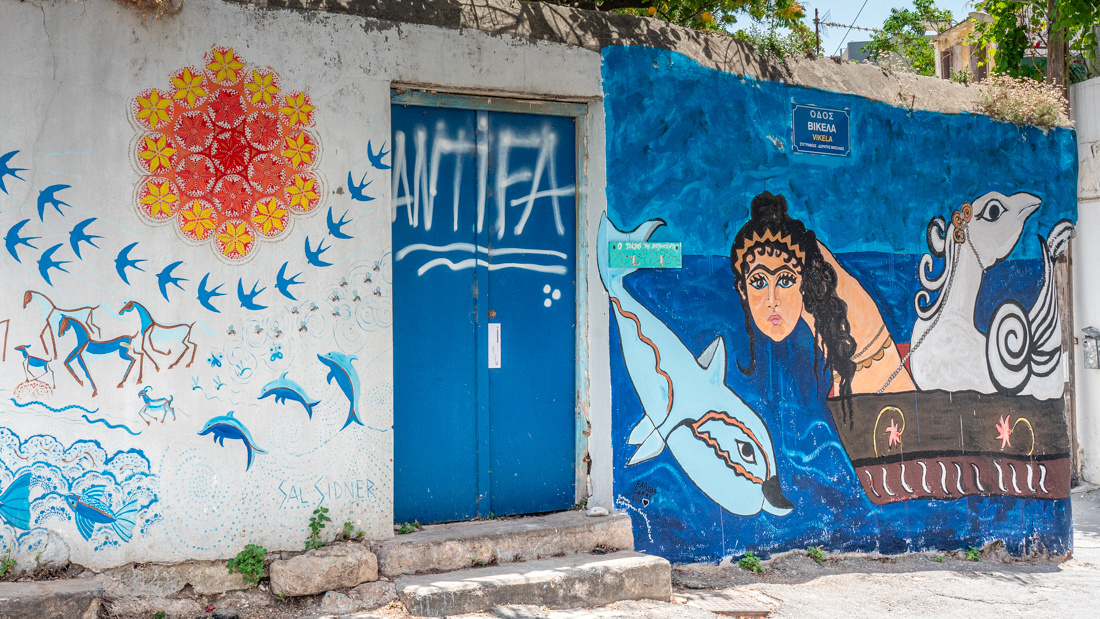 Different volunteer groups and the Municipality of Heraklion work together to renovate the area and preserve the history.  They paint old walls, decorate walls with street art and organize exhibitions and performances around the area. 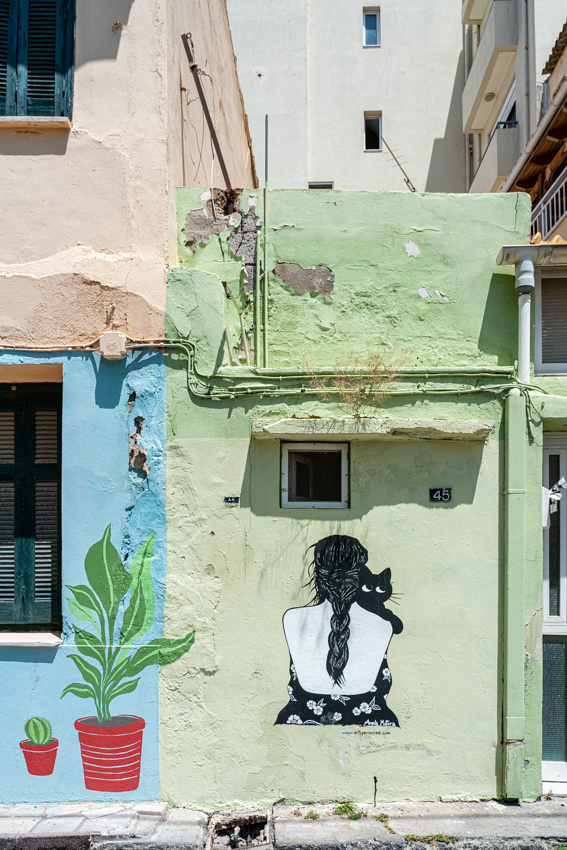 Originally, the neighbourhood had narrow streets full or hashish smoke, music, immigrants, red lights and shady people.  Before the project began in 2015, approximately 50% of the area was abandoned. Although the project started by painting old houses with specifically chosen historical accurate colours, this turned out to be  an impossible task since the paints were received as donations.  So the project became more about doing murals and street art.

In the late afternoon, we visited the Knossos Palace.   Knossos is the largest Bronze Age archaeological site on Crete and has been called Europe's oldest city.  The palace of Knossos eventually became the ceremonial and political centre of the Minoan civilization and culture. 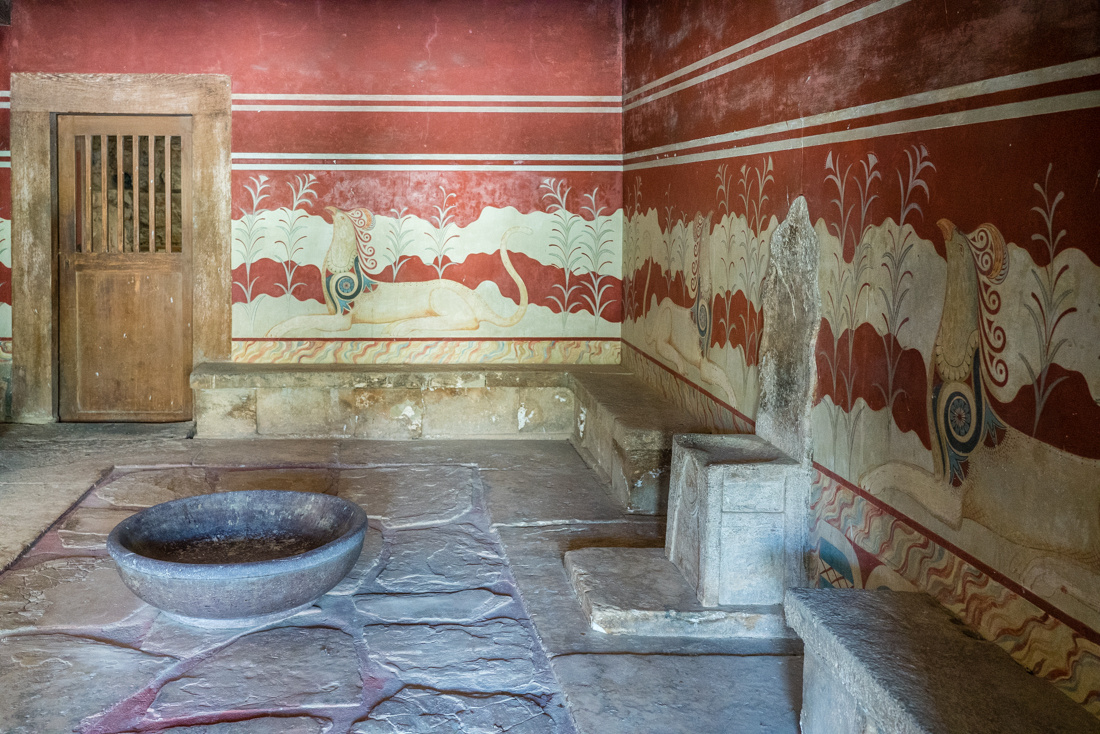 In its peak the palace and surrounding city boasted a population of 100,000 people shortly after 1,700 BC.  The excavation occurred in three separate periods beginning  in 1900 and ending in 1970. 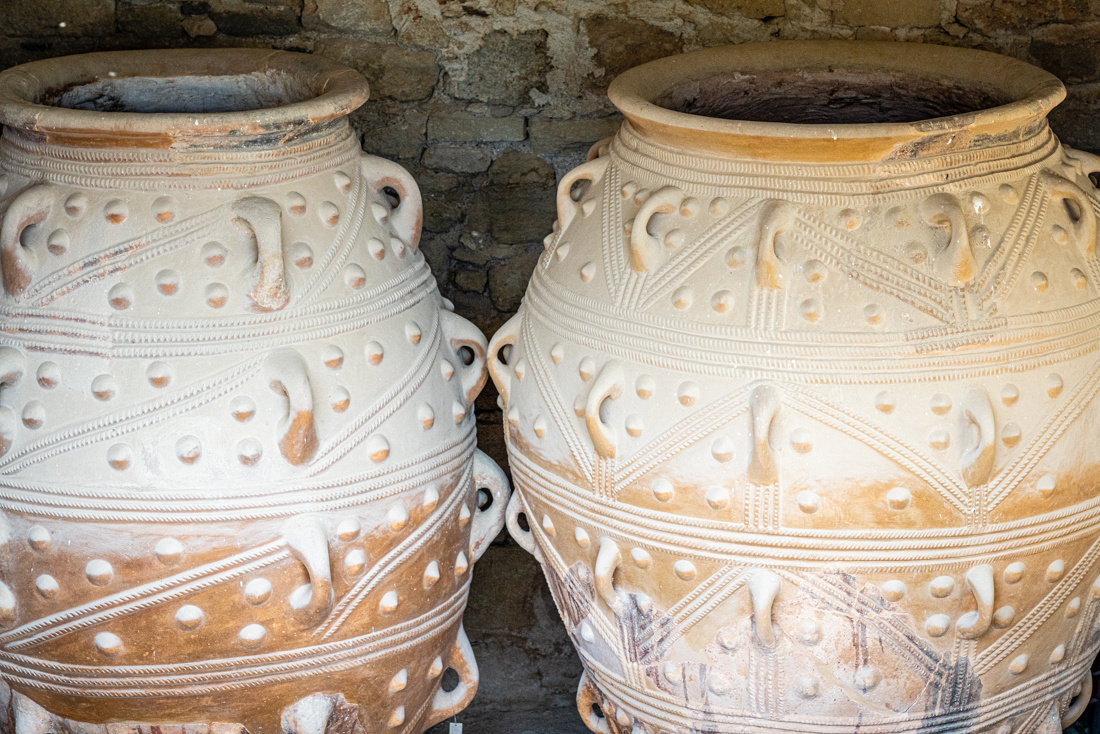 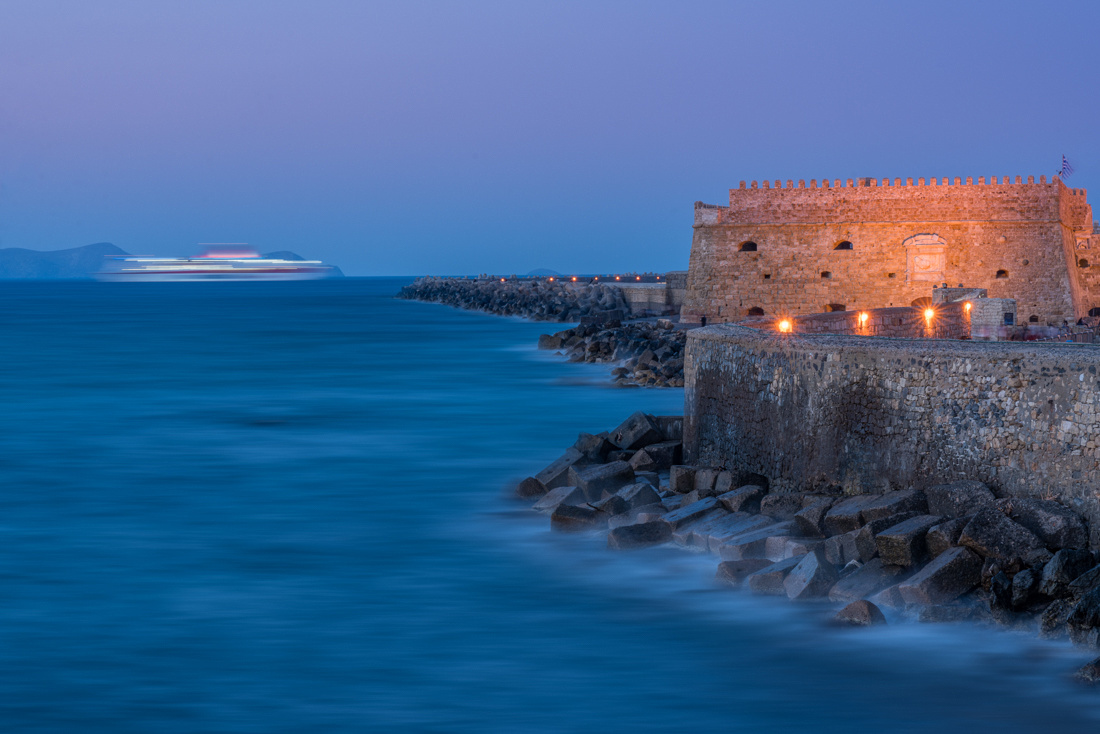 We  chose to photograph the fortress after dinner.  We never got the dramatic skies but we had a great subject.

Elizabeth(non-registered)
You captured the best of Crete! We visited Crete on our trips to Greece and never liked it as much as Santorini or Mykonos...but looking at your photos made me rethink its beauty. Once again, Marsha, your photos are excellent.
Duncan(non-registered)
Beautiful; thanks, Marsha.
Bill(non-registered)
Marsha, superb work as always.
Bruce(non-registered)
Good morning,
For several days now I tried to look at the blog but that boss of mine keeps interrupting.
You know I always have to pick a favorite so this time it's the marina, I can't believe the colour of the water.
Thanks for allowing me to see parts of the world that I have only heard about, I always enjoy.
Tricia Matheson(non-registered)
Crete is gorgeous! Never knew much about it, but feel almost like I've had a visit thanks to your remarkable photos AND commentary. What a treat!
No comments posted.
Loading...
Subscribe
RSS
Recent Posts
Fox Glacier Haast Wanaka Queenstown and Glenorchy Moeraki Boulders and Milford Sound Penguins, Seals and Sheep Southern Alps, New Zealand Last evening in Chania Chania and Selton Litania Beach Chania and Balos Beach
Keywords
Croatia Crete Morocco Cuba New Zealand South Island alberta National Park galapagos
Archive
January February March April May June July August September October November December
© Marsha Fouks